I figured it was time to show the world my true colors (and the furballs). Truthfully, this is not a secret. While I’m also the proud owner of a chow-chow, she has to live with my parents because, apparently, she’s a dangerous breed, and nobody will let me rent with her. Thus, it’s just me and the cats right now. Ryan, bless him, is deathly allergic to the cats. He’s getting shots to live with them. If that’s not love, I don’t know what is.

Back to the cats though…Stella is my baby girl. She’s 5 years old, and she’s half Bengal, which basically means that she looks like a hodge-podge of breeds. Jasper is my giant baby boy. He’s 4 years old, and while he weighs almost 13 lbs (I swear he’s on a diet), he meows like a kitten, and he’s afraid of everything. Except me. He loves me. I take great joy in this fact. They love each other, they beg for food at 3 AM and they are two very mischievous little heathens. I wouldn’t have it any other way. 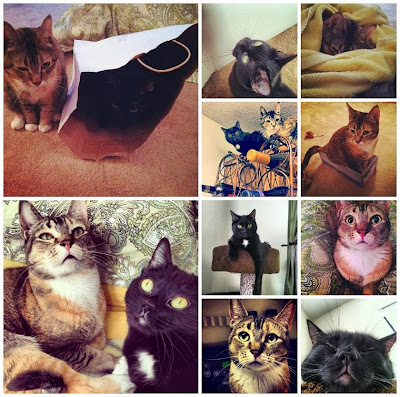 But seriously, guys. These two little rescues have brought so much joy into my life. Sure, they’re a pain in the ass to put in their crates and relocate every time I move, but I wouldn’t have it any other way. They’ll be coming with us to Germany. Ryan thinks this is hilarious. I, however, am dead serious. Fingers crossed they don’t hate me forever?