Now that we’ve been back from our honeymoon for over a week,

I figured it was about time that I shared some photos and a little recap of our honeymoon adventures.

Ryan and I decided to head up to Quebec City for a little honeymoon immediately following the wedding,

and we’ll take a cruise later this year to celebrate, as well.

But for now, we just wanted a quick, easy, fun and relaxing getaway that we could both enjoy.

We stayed at the Fairmont Le Chateau Frontenac in the heart of the old city.

It’s the hotel right on the river that looks like a castle, topped with old copper turrets and peaks.

It was to die for.

I’m lucky enough to work in travel, and it affords us the opportunity to stay in some great hotels

for just a fraction of the cost – like this five-star gem. As expected, it was absolutely freezing the entire time we were there,

so we explored a little bit, ate great food and really just spent time relaxing together in our beautiful hotel.

We ate at La Cremaillere, the most incredible restaurant, on Tuesday night while it was positively blizzarding outside.

We were the only patrons crazy enough to brave the temperatures, and we had the entire place to ourselves.

The owner of the restaurant even made Ryan’s dish at our table.

It was an incredible experience, and everything tasted a little less amazing after that.

On Thursday evening, Ryan and I decided to check out the Hotel de Glace, or the Ice Hotel.

Each year, the place is constructed in January, and it’s expected to melt by mid-April.

The entire place is crafted from ice and snow bricks – even the beds, the bar, the chandeliers – all of it. We very briefly contemplated spending our last night there,

until we experienced just how cold it was, at which point we were convinced that no amount of fur would keep us warm.

All the beds and seats were covered with these furs, but when your bed is literally a block of ice?

Yeah, I’m not buying it… 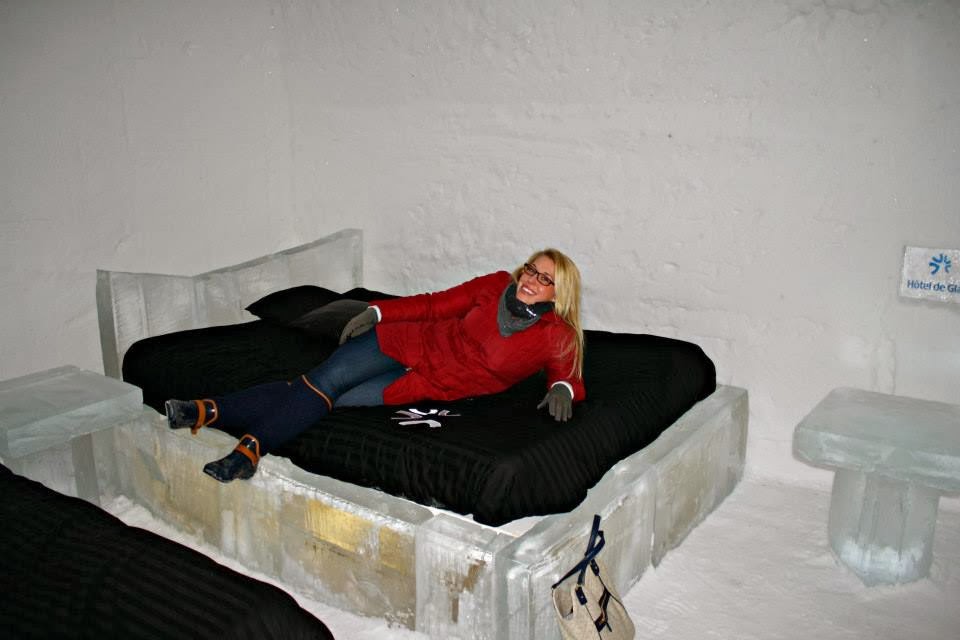 Despite the polar vortex and our freezing fingers,

neither of us would have changed a thing for the world, and we really had a blast.

We’re so looking forward to a cruise later this year and many trips together in the future!