About a month ago, I could barely run, and I was living in a frozen state in which it was difficult to run outside.

These days, however, I’m running nearly every other day outside in Arizona…

and I’m actually loving it!

Who would’ve thought that was even possible?

When I first started running, I could barely do a full mile.
Granted, Sierra Vista is at altitude, but it was a huge blow to my ego and to my hope to run a half this year.
However, I found that by putting more miles – slow and steady – on my legs each week,
I have more energy, I have more stamina, and I actually think it’s a possibility now.
And, the real kicker is that I’m actually enjoying running.

For your viewing pleasure, this was actually my first run upon moving to Fort Huachuca: 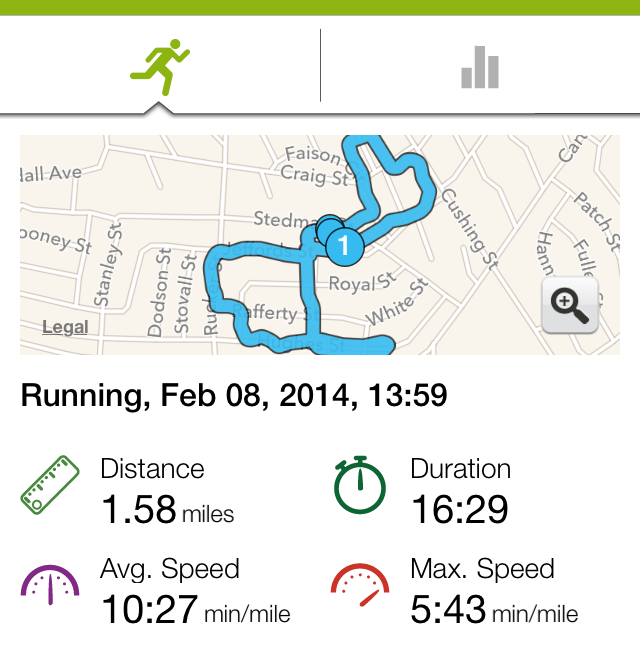 I was really proud of those numbers, too, because I remember how much the first few steps hurt,
and I told Ryan that I didn’t think I’d even make it a single mile.
I made it a mile and a half that day, and now I’m up to 3…fairly comfortably.

I’m more comfortable going out at an even pace now,
and I finally feel like I’m not on a death march in the final legs of any given run.
This past Sunday, with Ryan cheering me on, I did my first 3-mile run all by myself – not in a race –
and I was really proud of the result!

I’m using Endomondo to track my mileage, my pace and my distance,
and I supplement twice a week with interval runs on the treadmill.
I have new running shoes and an incredible FitBit Flex, both of which are a Godsend,
but I’ll say that I’m still struggling with shinsplints a bit, which sucks.
So, I’m mixing things up now and getting myself back in the pool, which is awesome.

I’m so thankful for all of you guys’ encouragement and sweet words as of late…
they’ve been much-needed, and Ryan and I really appreciate them.
Things are looking up though, and I’m excited to keep seeing the positives all around!