5 months. I can barely believe our little man is 5 whole months old today! They said time flies, and they weren’t kidding. Every day, this little boy changes just a little bit more, and I watch that silly, creative little personality develop. Every day, I fall more and more in love with this little half Ryan/half me, and I can’t believe he’s all ours. Sometimes, Ryan and I just stop and stare…wondering how in the world we could be so blessed to have such a perfect, handsome little boy. We are so, so lucky. 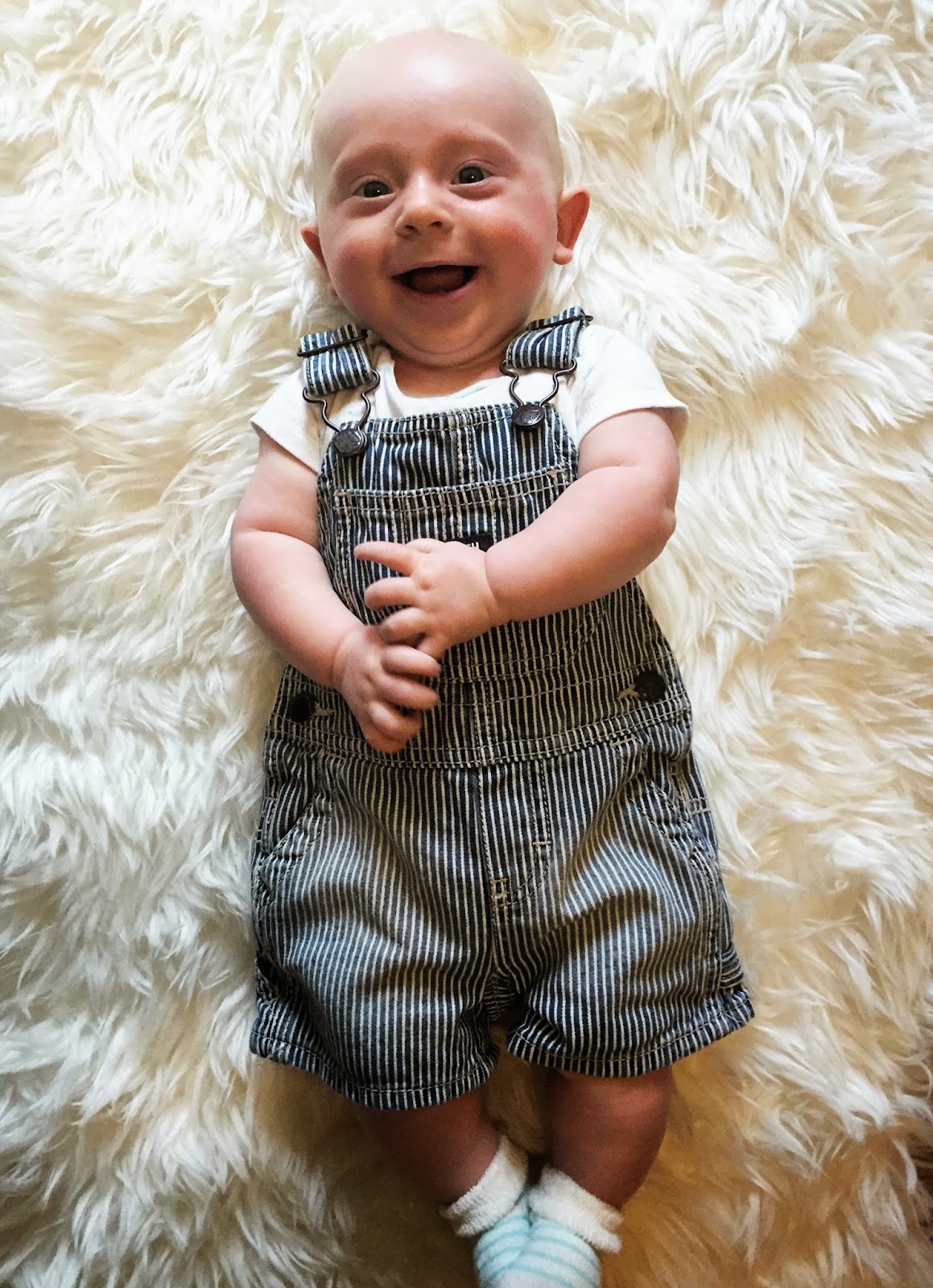 Weight: Spencer is now a hearty 14 lb 3 oz, which is still on the peanut end for a 5-month-old. We’ve been encouraged to start solids for a while now, and he’s been exhibiting all the signs that he’s ready, so we’re going to bite the bullet and start a little bit today, while otherwise exclusively breastfeeding. Here’s hoping he loves it! We’ll recap those adventures tomorrow 😉

Clothes: I’ve officially retired the 3 month onesies, though he still fits in his 3 month dress pants. Most of the 3 month sweats are a little snug about the waist, so I retired those, as well. He’s comfortably in 3-6 month onesies, as well as 6 month onesies from Carters, though his petite little legs are bit too small for his 6 month pants right now. Luckily, we’re wearing a lot of rompers and shorts these days with the warm weather!

Milestones: What didn’t this boy learn to do this past month?! Raspberrying at momma and daddy is his new favorite pastime, and I love it. He mimics us when we do it to him, and though there’s a tremendous amount of drool to accompany it, I love it! He smiles so darn big, and he’s officially learned to roll from back to front – though he’s an obstinate little guy and doesn’t want to do it ever again. He’s much more interested in scooting around on both his tummy and his back. I think we’re going to have a crawler soon! We’ve also noticed his first two teeth starting to bud. Neither has cut yet, but we’re getting so close. Oh yes, and he loves using his voice. A lot.

Sleeping has been worse this month – about 2 wake ups a night – but last night he threw me for a loop and slept from 8-5. I was so surprised that I got up to make sure he was still breathing. He’s also officially sleeping without a swaddle…finally. It was a tough break, but we knew it had to happen sooner rather than later! 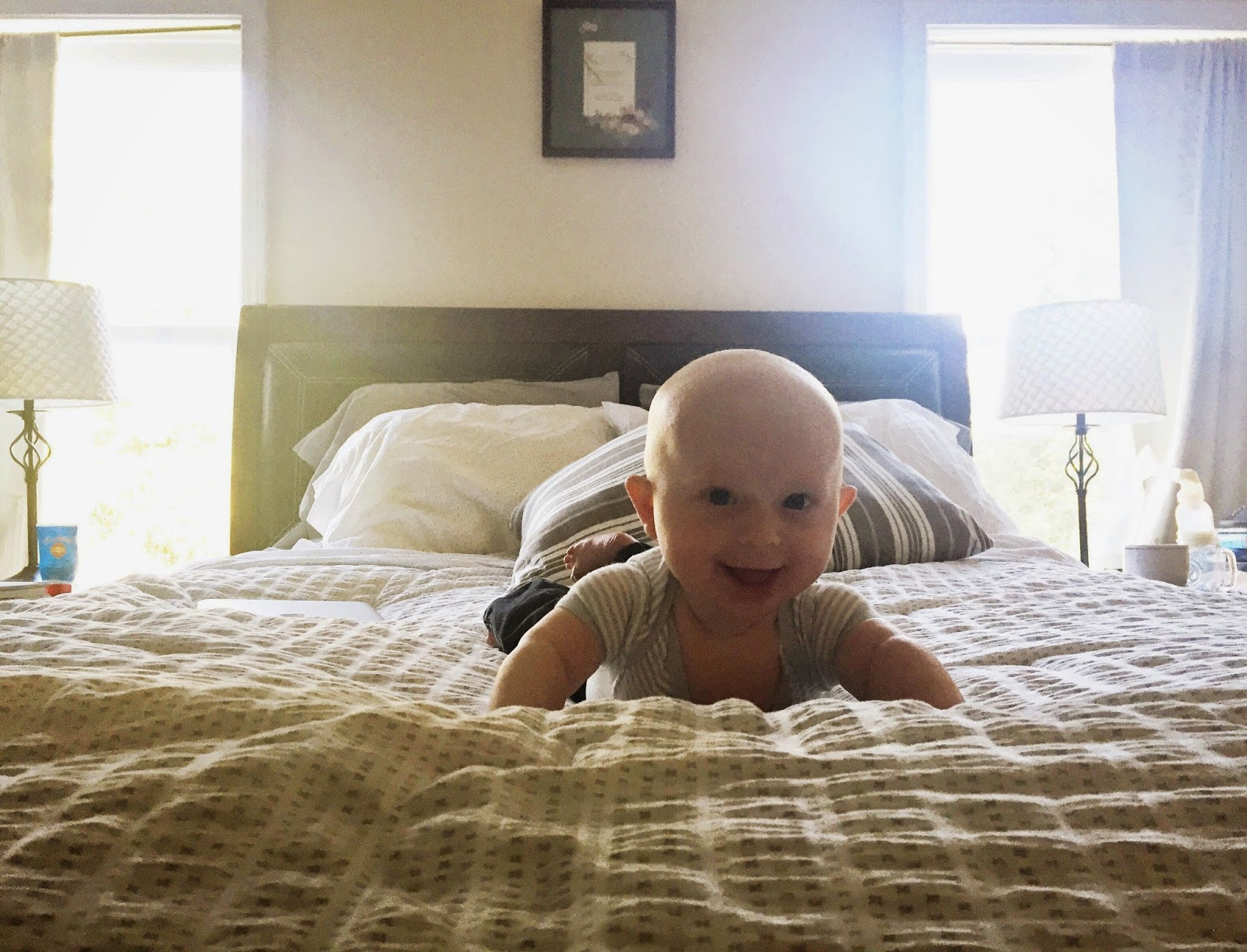 Spencer’s Favorites this Month: He’s absolutely loving his Sophie la Giraffe teether, and I think it’s his favorite of all the toys we have for him. Because he’s not loving lying down anymore, he’s also really partial to the Baby Bjorn because he loves facing out and being at our eyeline. And, above all else, he loves the warm weather! I’ve never seen such a happy boy in the sun!

Mama’s Thoughts this Month: This month has been more challenging than the last few for a few reasons. First, losing our sitter and balancing work has been difficult. Second, the sleep regression (though not terrible), made for a sleep-deprived and stressed mama. All that said though, I’m loving watching Spencer grow more and more assertive every single day. I wouldn’t trade this for anything in the world!