I  mentioned a little bit ago that I have big goals with my running this year, and I’m excited to have started 2017 with a bang! I hope to run the year 2017, but even if I don’t quite make that, I’d like to have the most mileage I’ve ever had on these legs of mine, feel great and learn to really love how physically active I can be. This impending deployment is really wearing on my psyche, but I’m excited to throw all this nervous energy into continuously progressing and going in the right direction.

I started using a new app called Strava a few months ago, but now that I’m running with Danny most of the time, I’ve decided to go back to my old faithful, Nike Running Club (NRC) because it easily pauses when Danny inevitably has to poo in the middle of my run. Seriously. That, and I enjoy looking at my all-time total every time I log in. I transitioned back to it yesterday, so I have two runs that aren’t recorded in that total up there.

This was a month of getting back out there, and I’m thrilled with my progress – even though I’m slow as molasses. My goal is to start Hal Higdon’s Novice marathon training plan soon, and then repeat it until Chicago in October. Right now, I’ve been working on running for a set time, vs for distance, and I’ve found that it keeps me pretty on track. 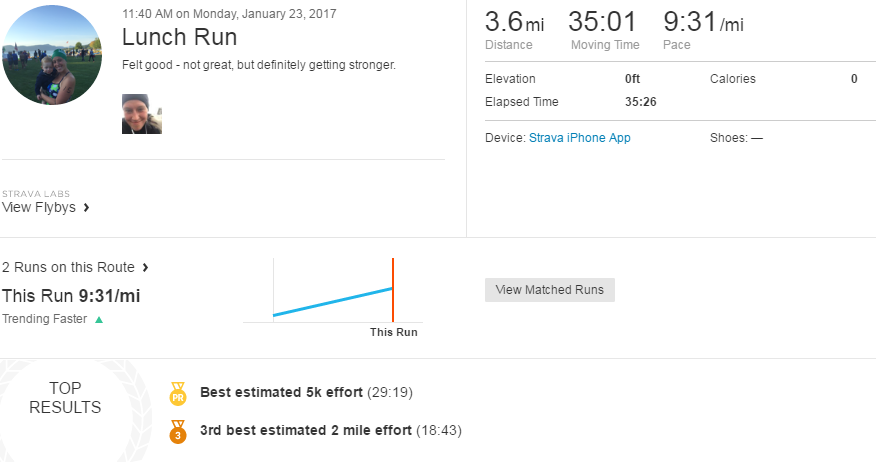 Here are some January stats for my running records:

This was a stepping stone month for me, and I’m excited to keep progressing. I’m thinking of signing up for the Old Orchard Beach Half Marathon at the end of March in Maine, and I’m doing the Ocean City NJ half on April 31, so I’ve got some serious training to do!