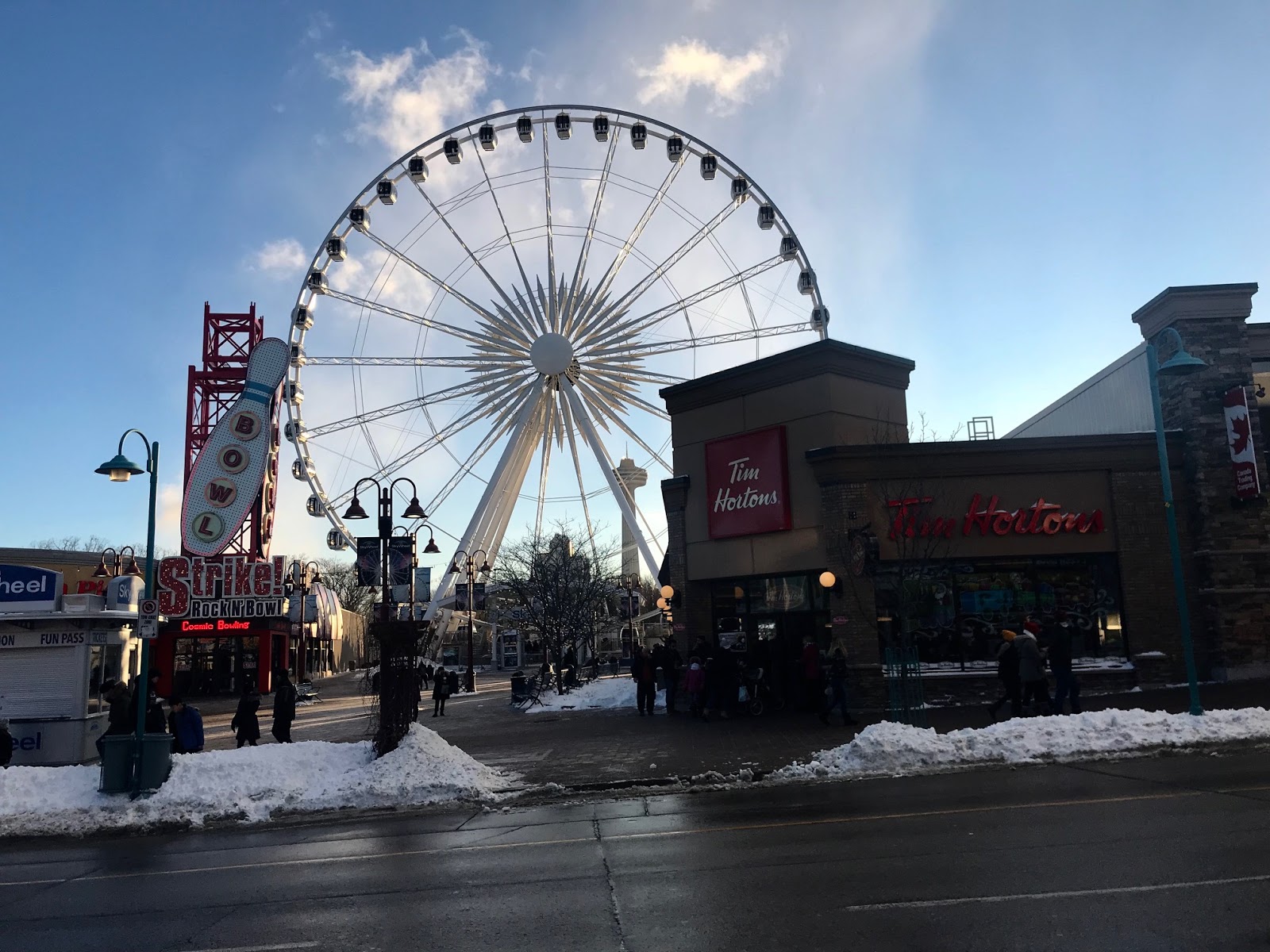 As our time here at Fort Drum dwindles, we’re working hard to balance seeing things we want to see before we leave and getting things done around the house. Since Ryan had a 4-day this past weekend, we decided it was the perfect time to jump over the border to Niagara Falls, Canada. I’ve been before, but not since I was about 12 years old. This time, it’s the dead of winter, and all my boys were experiencing the falls for the first time.

We bought a deal on Groupon a couple weeks ago that included one night’s accommodations at the Clifton Victoria Inn at the Falls, several dining options, and four passes to the Fallsview Indoor Waterpark. I mean, come on. Is there a better way to pass a frigid winter day than to take your kiddos to an indoor waterpark?!

We left at about 11 AM on Sunday after a relatively quiet morning. The drive takes just under four hours, so we knew the boys would nap in the car, and we’d arrive just before dinnertime. We checked into our hotel, and then we decided to make our way down to the falls, just in time for the temperature to start dipping below 10 degrees. The temperature was less of the issue – it was windy! 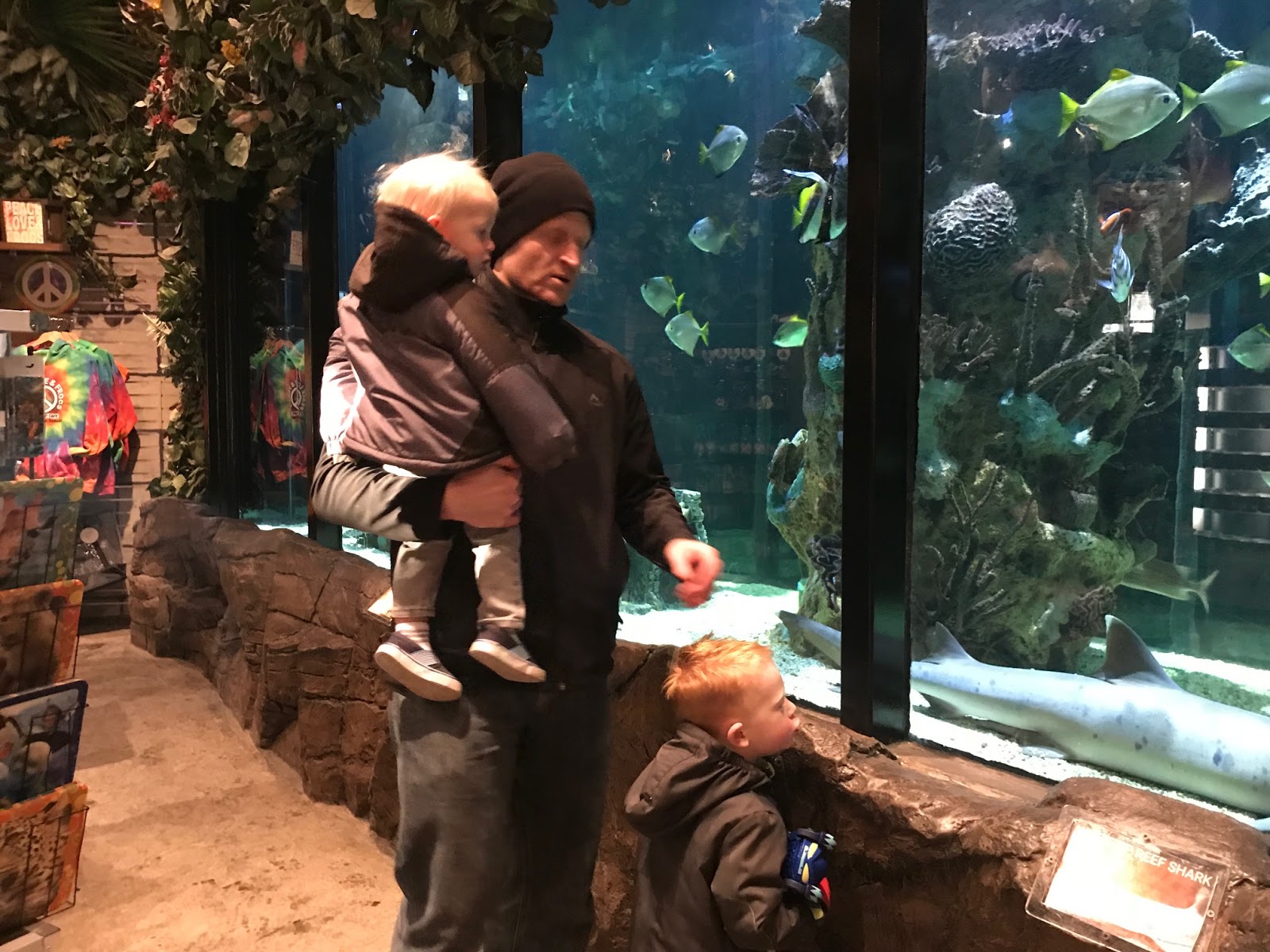 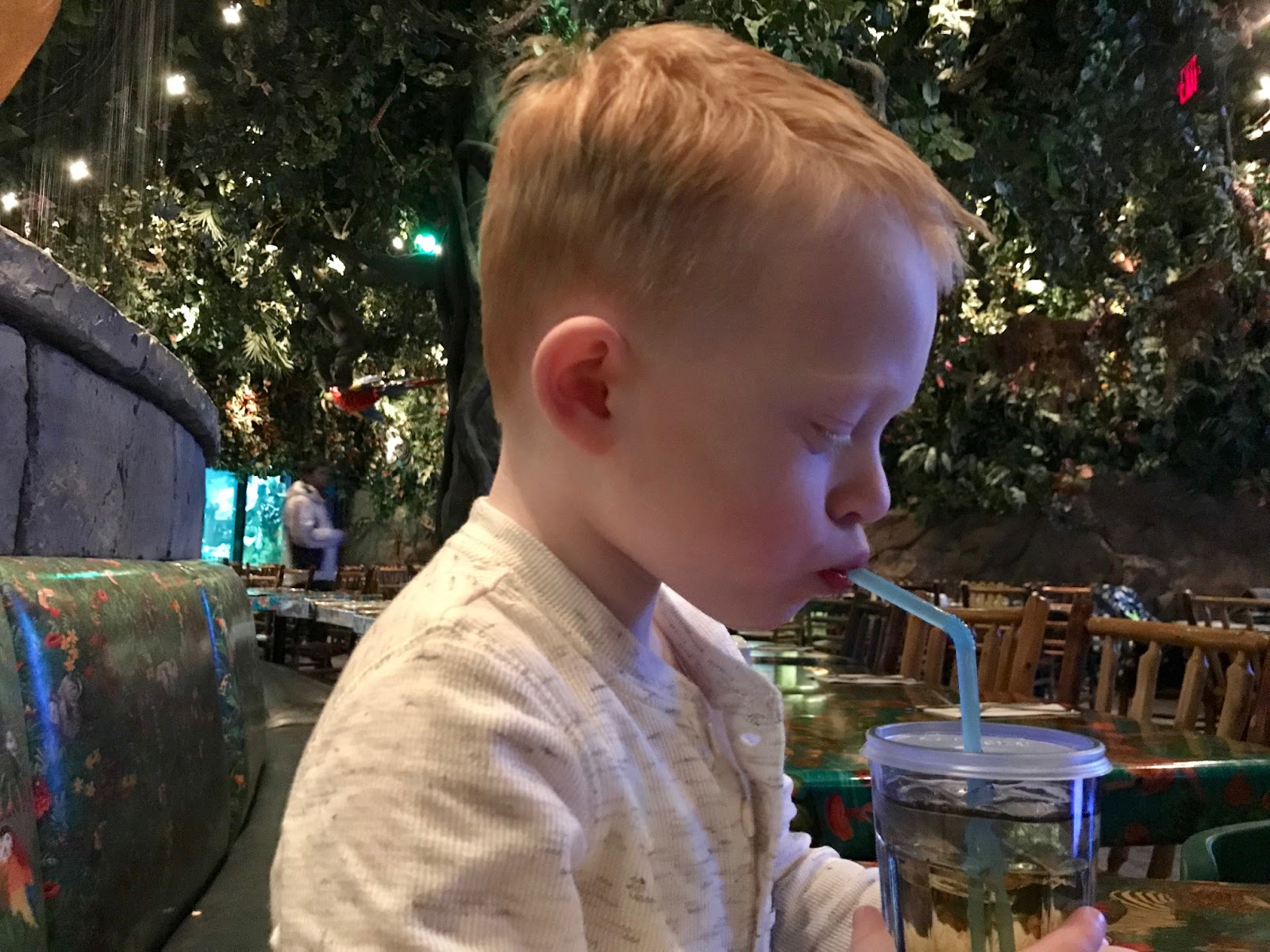 Spence just wasn’t having it, so we ducked in for dinner at the Rainforest Cafe on our way down towards the falls. It was only about a 10-minute walk from the hotel, but tiny little men being cold takes precedent! The boys loved the Rainforest Cafe! They loved the stars on the ceiling, watching the gorillas come to life, and seeing the elephants flap their ears in the back of the restaurant. It was definitely on the pricier side (hello, tourist trap!), but it was worth every penny.

After dinner, we went down to the falls in time to see them beautifully lit up, and though we only stayed a few minutes, I made Ryan promise we could go back the next morning. He came through on his promise, but only I got out of the car this time! Here’s why… 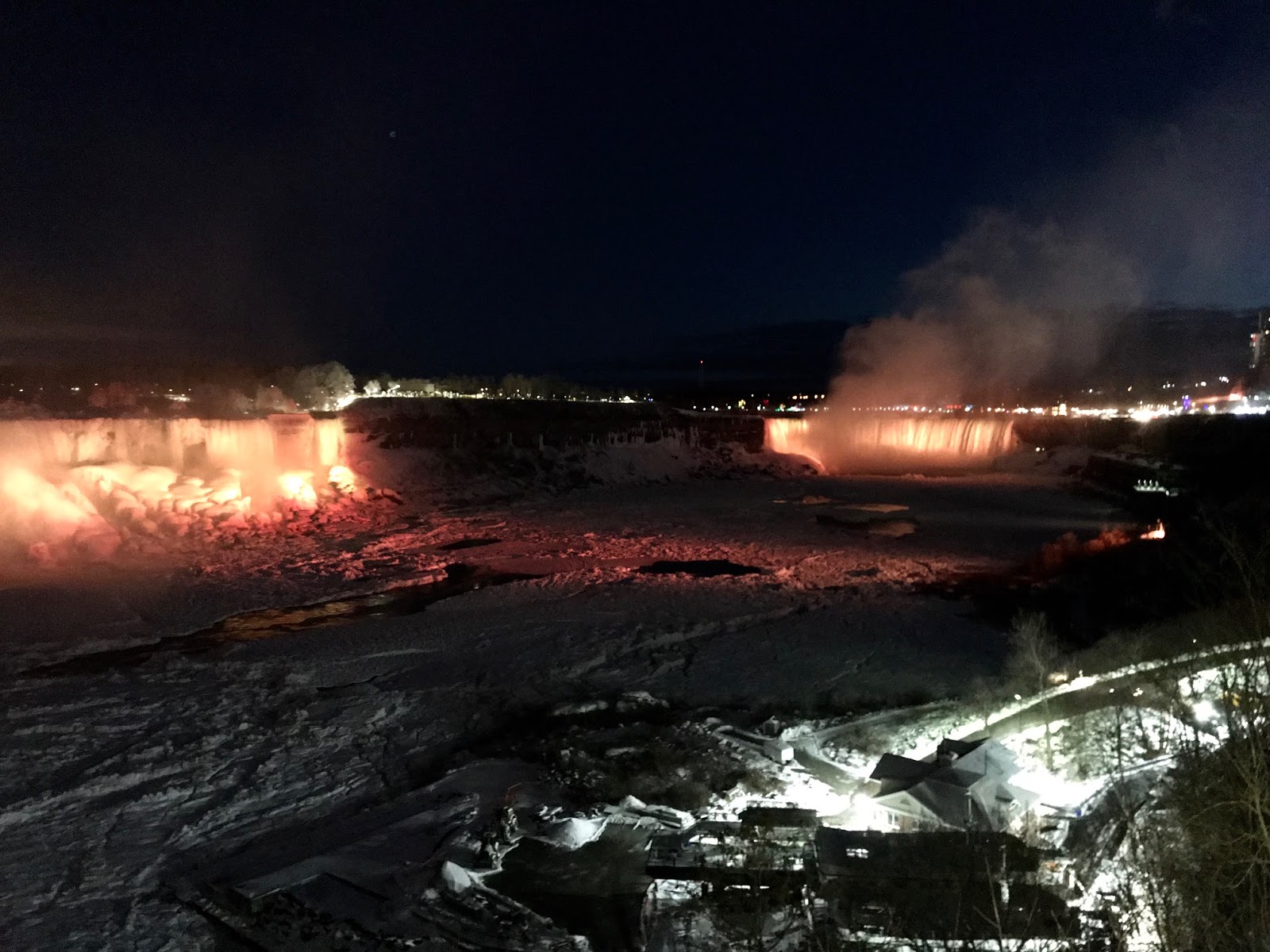 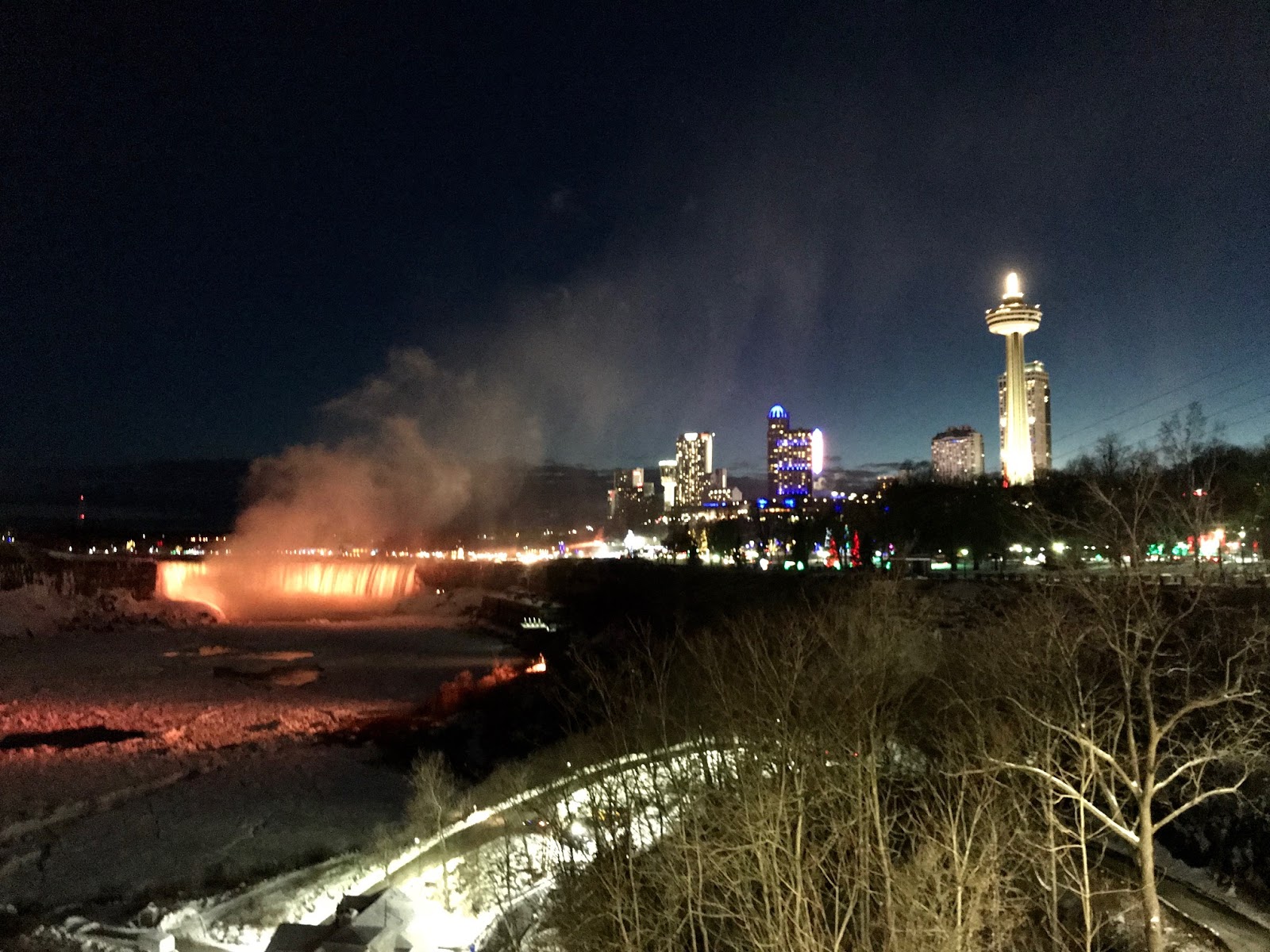 As we drove in, our already cold car started being hit by the mist of the falls, which immediately froze on contact. The car was a sheet of ice. We pulled over, heated the car further, turned the wipers on full-speed, and we decided that I’d be the only one to get out this time. It would’ve been way too much for the boys. So, we drove up, pulled over, and I jumped out.

It was one of the coolest (coldest) and most incredible views and experiences of my life! The water was misting me the whole time, freezing on my jacket, jeans, boots, and skin on contact. The frozen falls were incredible. There was something so serene and beautiful, but also so wild about seeing them like this. I took as many pictures as possible before jumping back in the car and stripping off my jacket, which melted quickly. 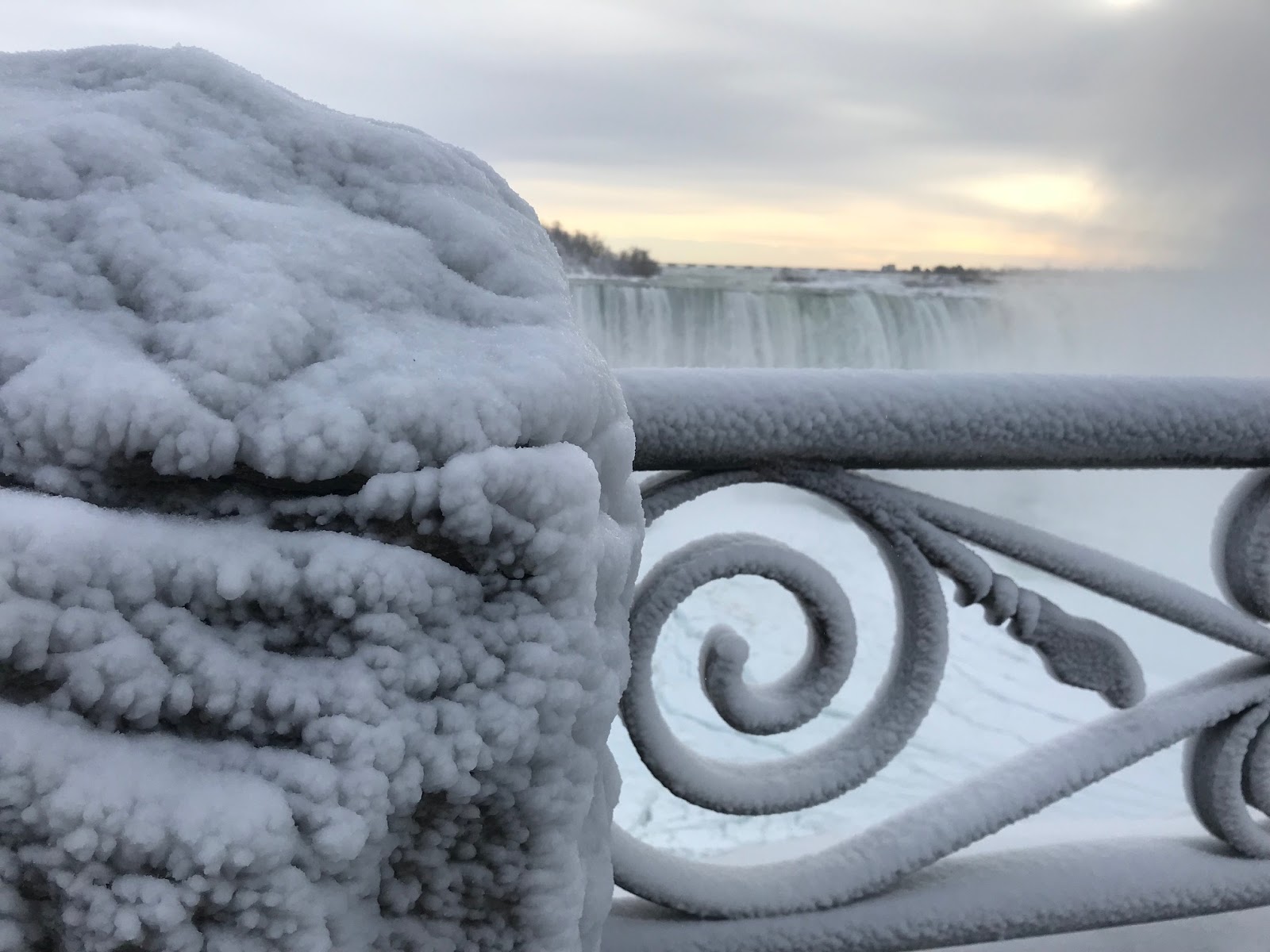 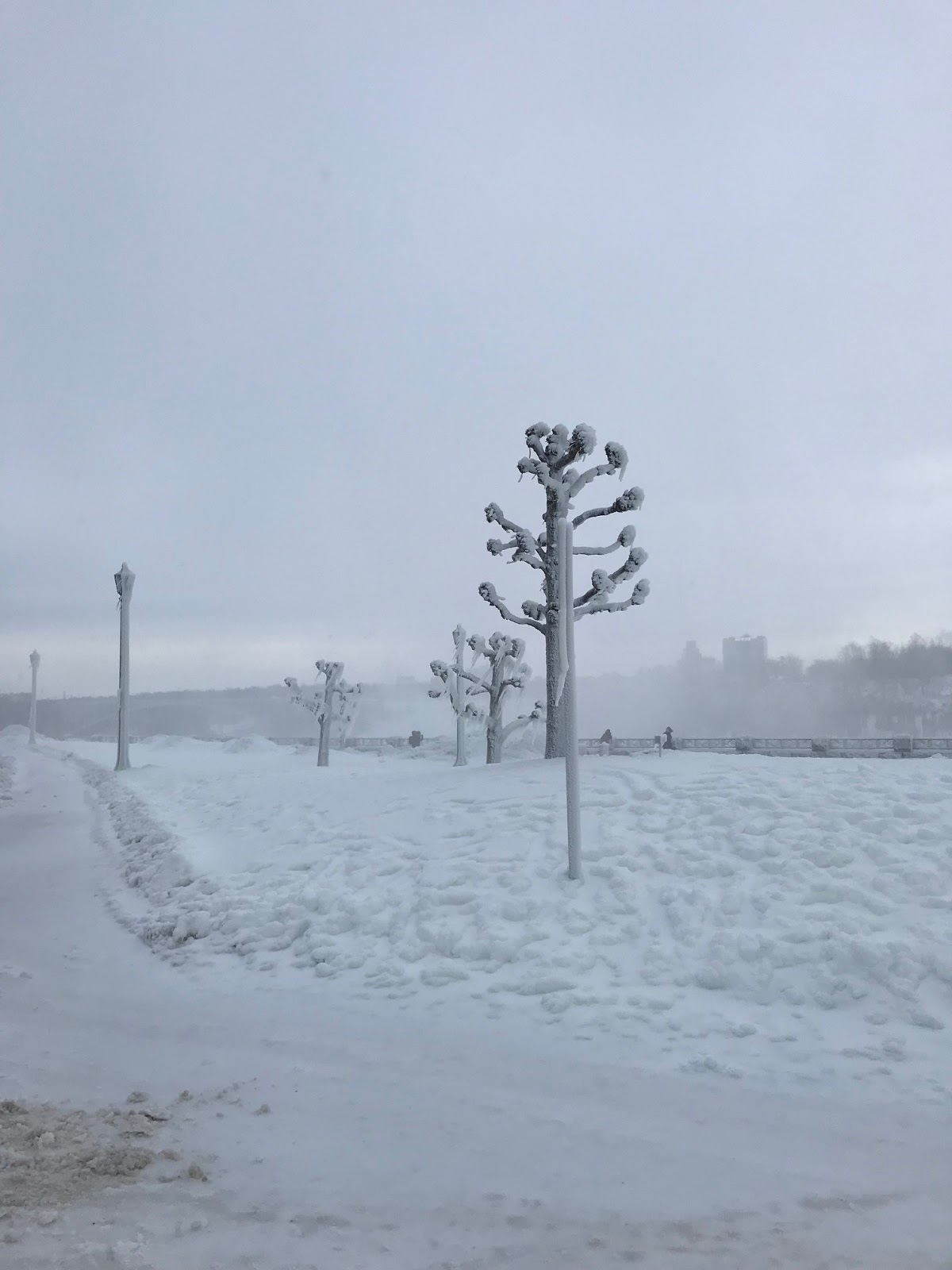 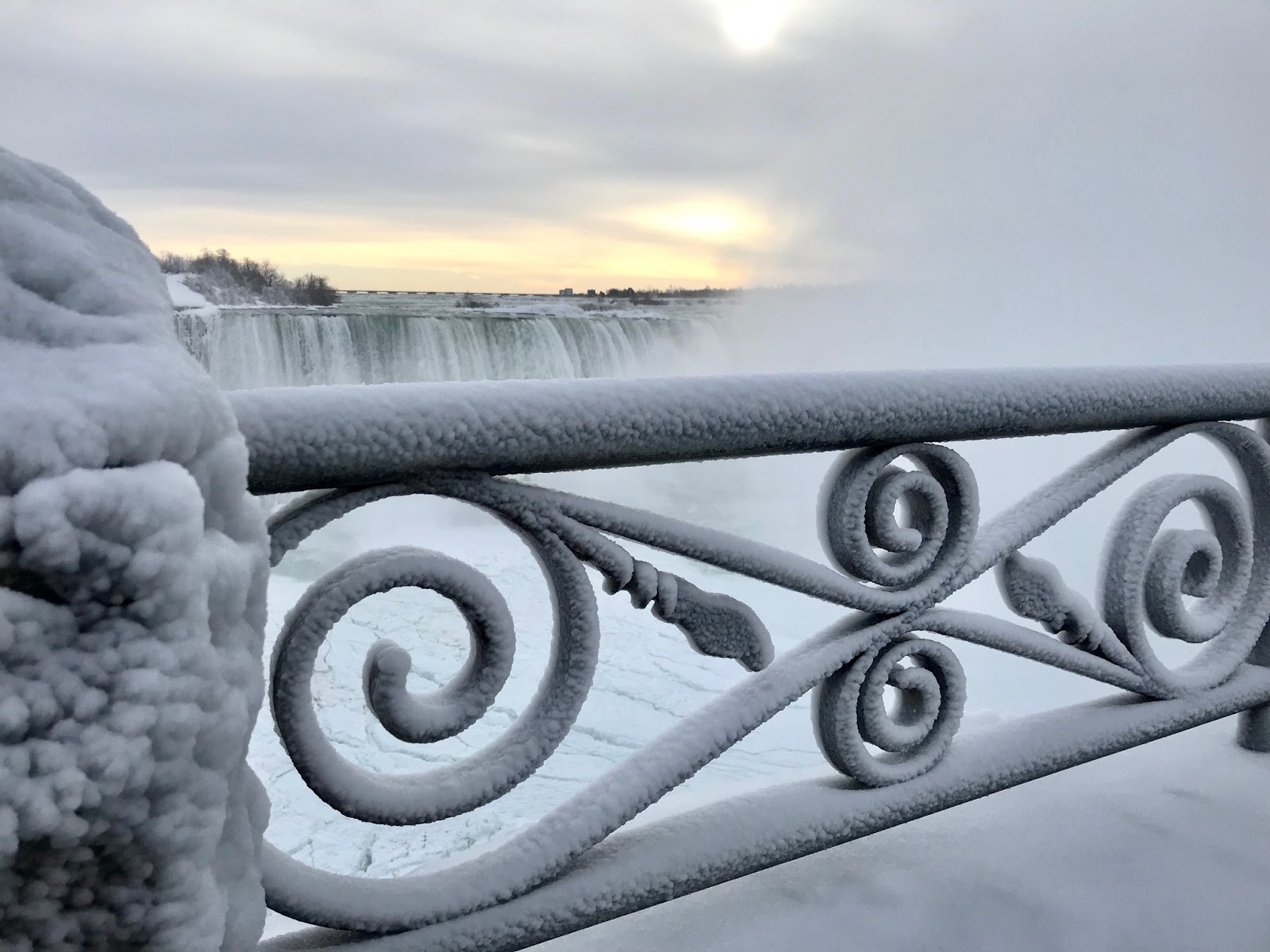 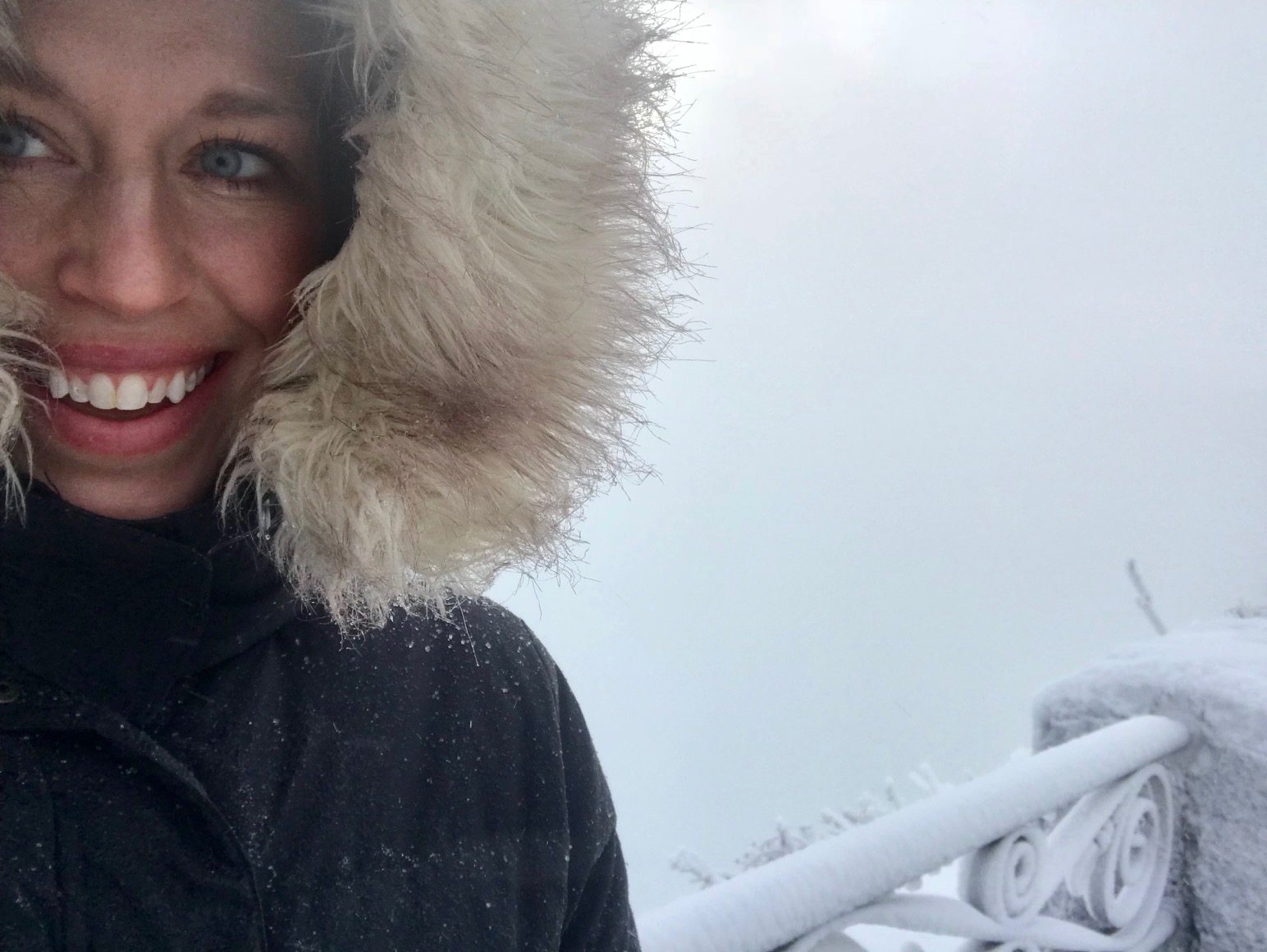 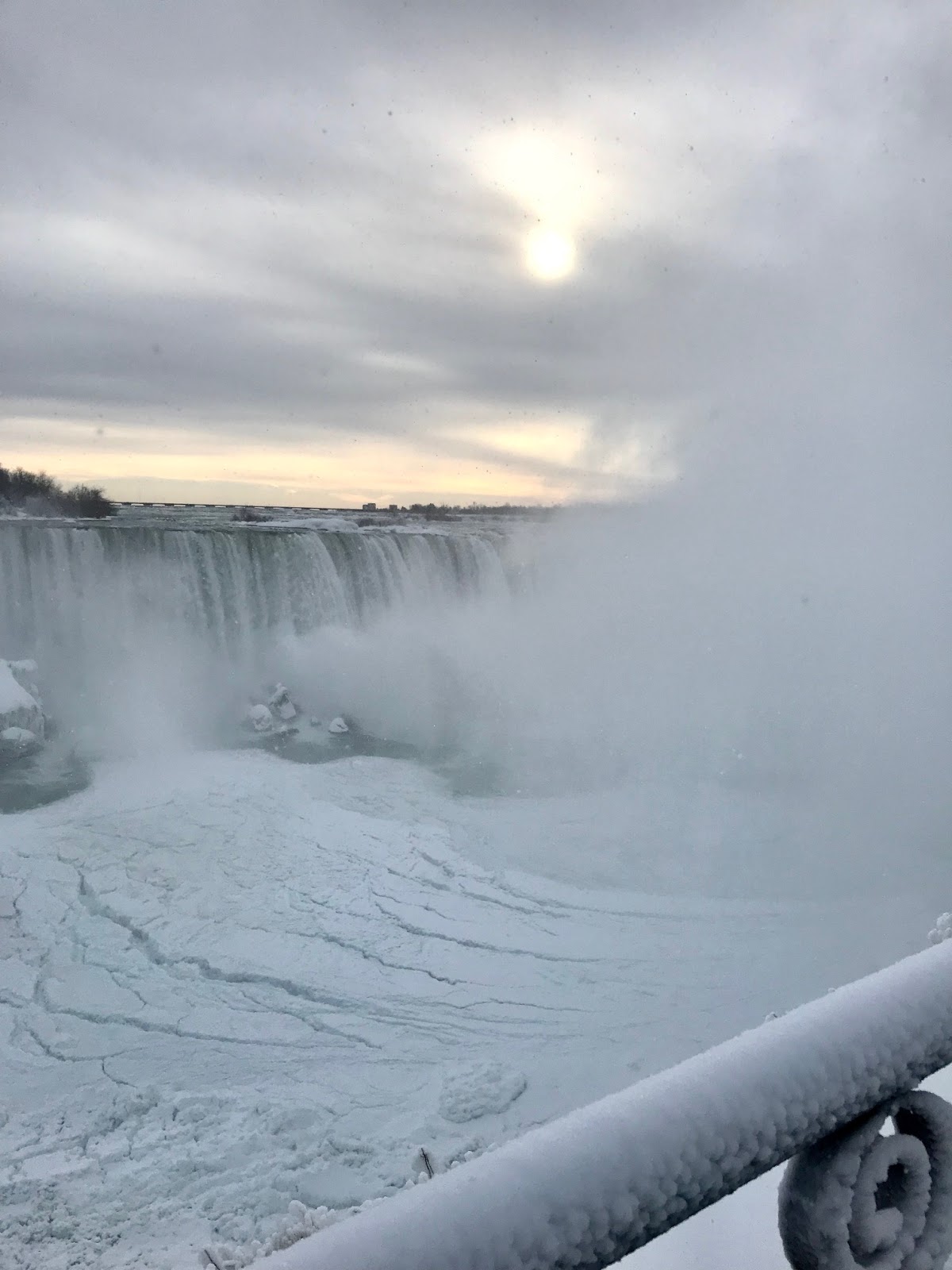 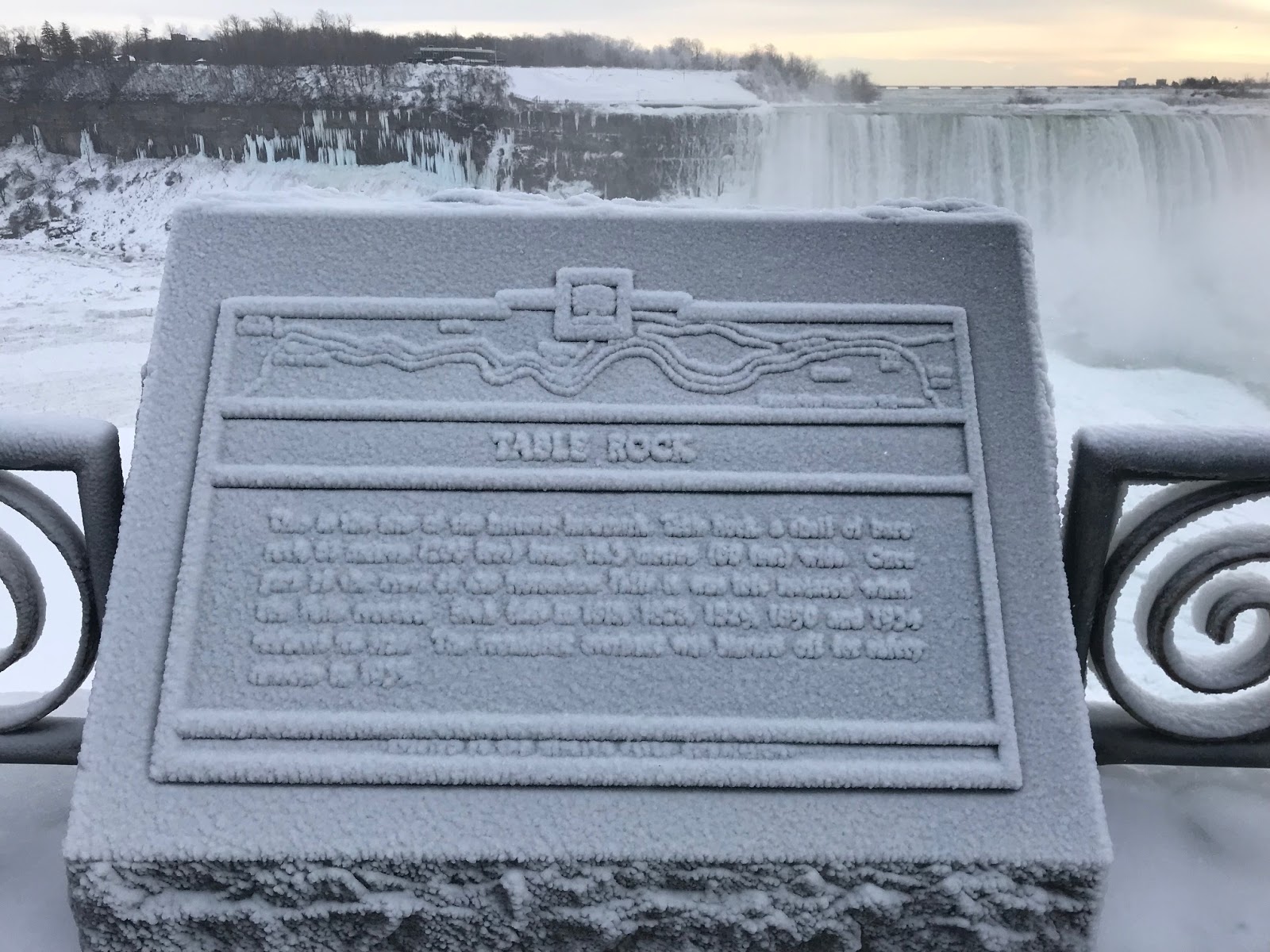 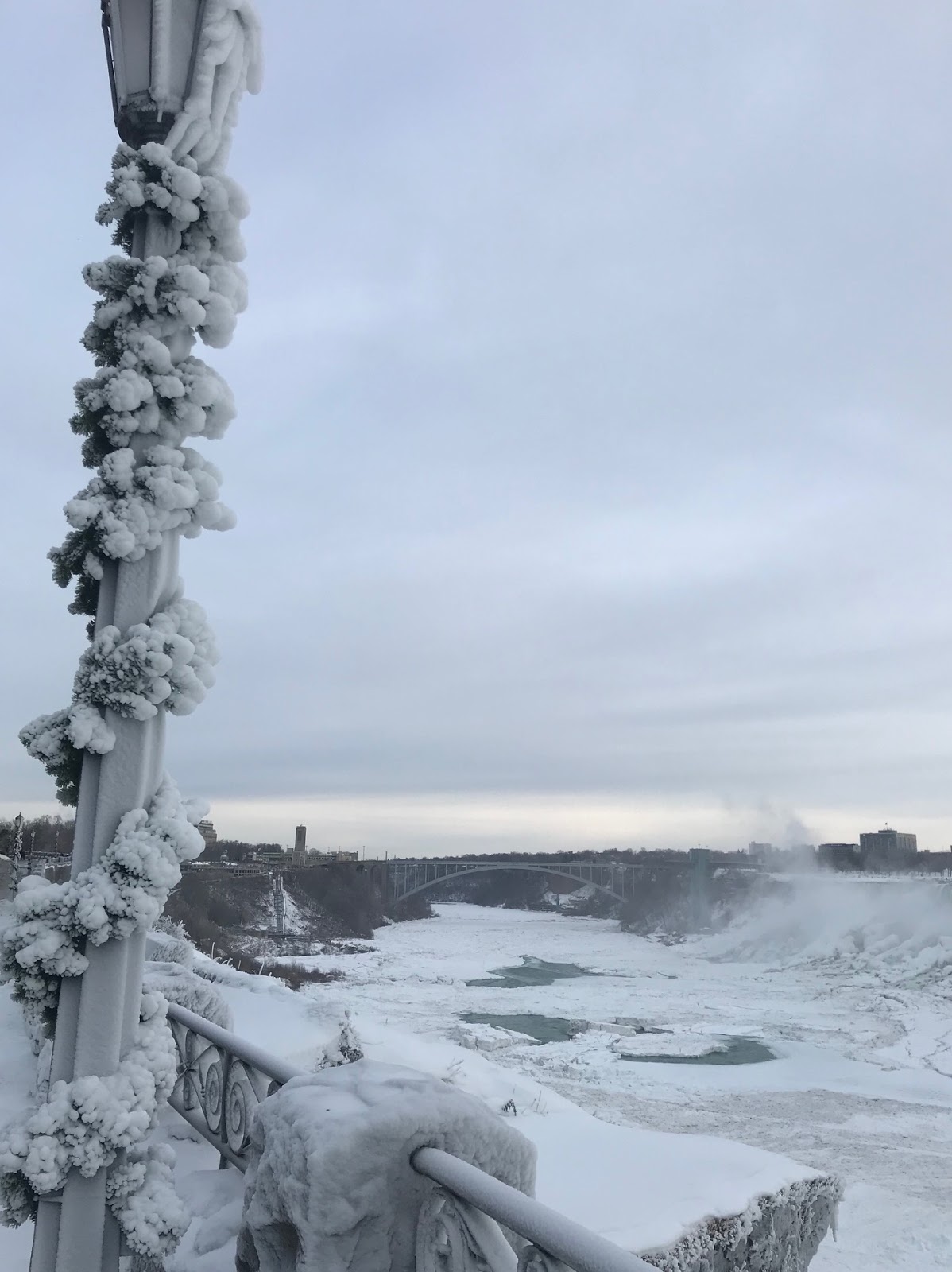 Was it cold? Yes. Worth it? Heck yes.

After that, we went to the waterpark, which was amazing. The boys are too little for most of the slides, but they were perfectly content playing in the little tot’s area, the smaller slides, and the wave pool. Porter has zero fear, and Spencer just wanted to play forever, so we indulged them (and ourselves), working up a healthy appetite before heading home.

Trips like this are so fun. They’re hard with the little ones, but I wouldn’t trade it for the world. Both boys are becoming so good at traveling. They settle into their seats, ask for popcorn, and watch a show, both of them napping when needed, too. We don’t have too many weekends left for trips like this, so we’ll take it!

Have you ever been to Niagara Falls?