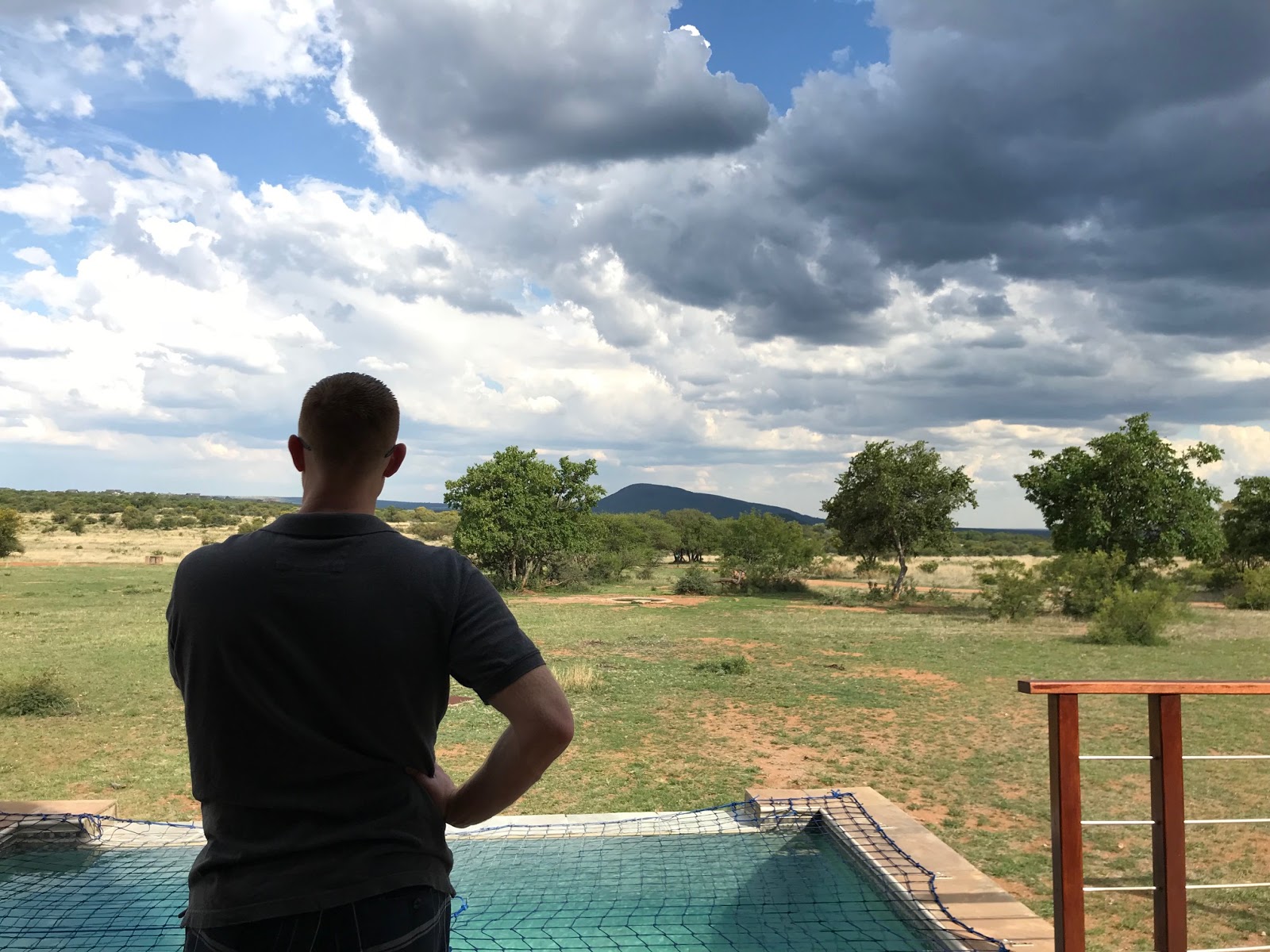 After we arrived in South Africa on Saturday morning, we spent a day and a half resting in Pretoria with my aunt, uncle, and cousins. After that, we headed out to the Bosveld to relax and revive at our house in Zebula, South Africa. Not sure what the Bosveld is? Easy answer – the bush. That’s where you see your wild animals, although Zebula is a golf estate and nature reserve, so no dangerous animals roam freely there.

We knew the boys would love to see all the zebras and giraffes, plus the house is really off the grid in terms of wireless, cellular, etc. It’s beautifully done with a classic braai and fire pit, as well as a small infinity pool, a huge open-air deck and verandah and four bedrooms with ensuite bathrooms. Basically, it’s like a resort in the Bosveld. Sold. 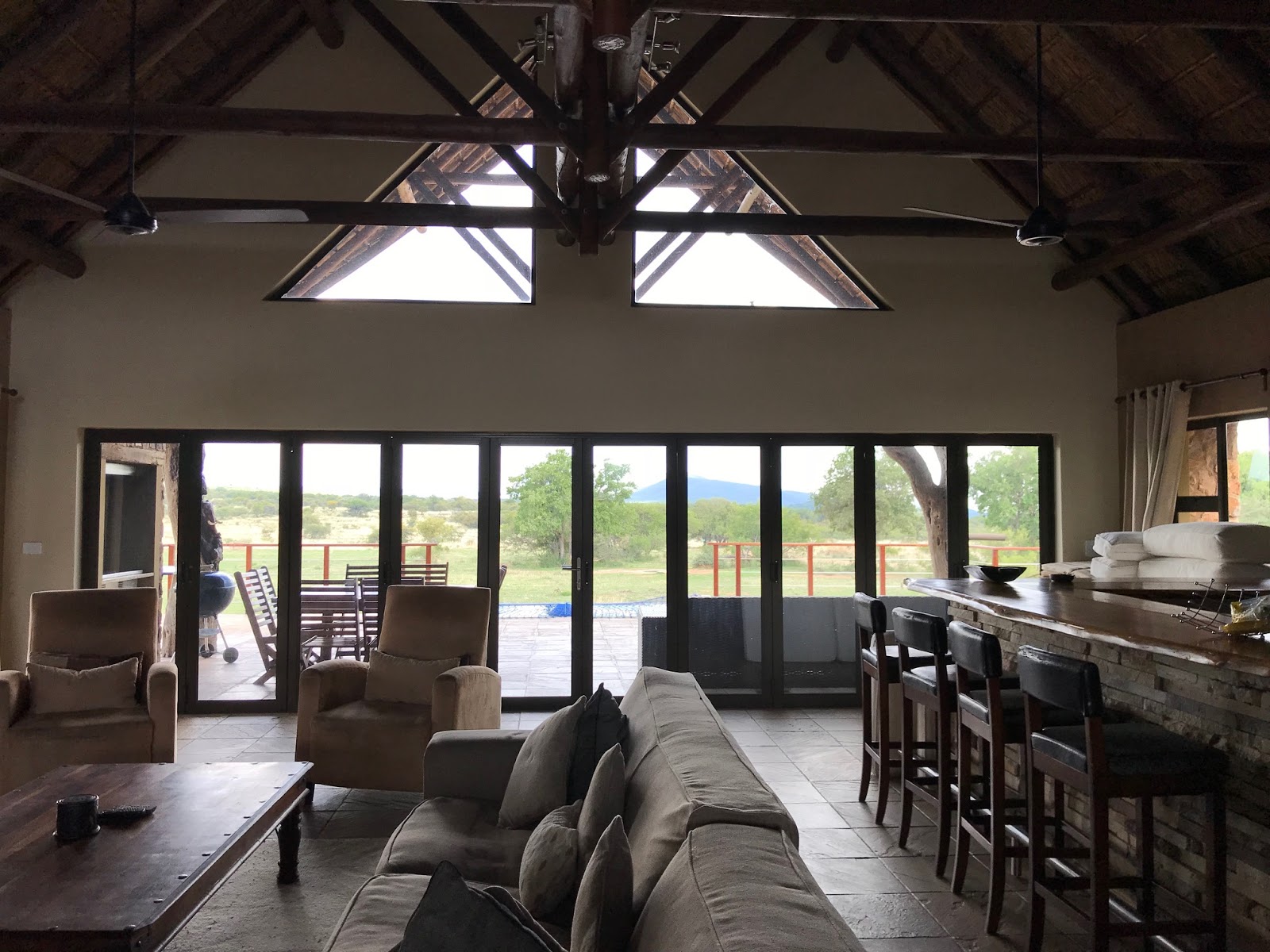 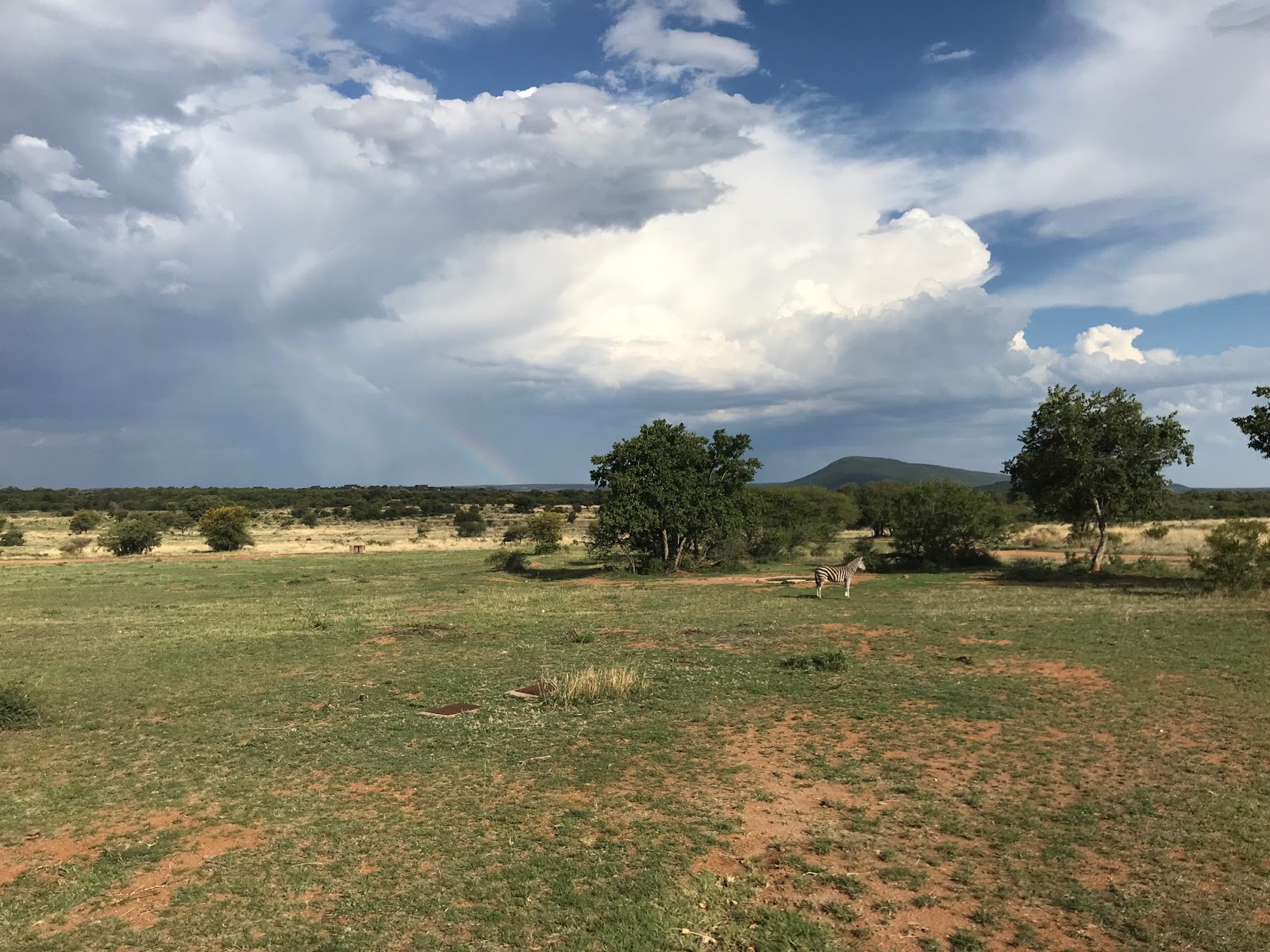 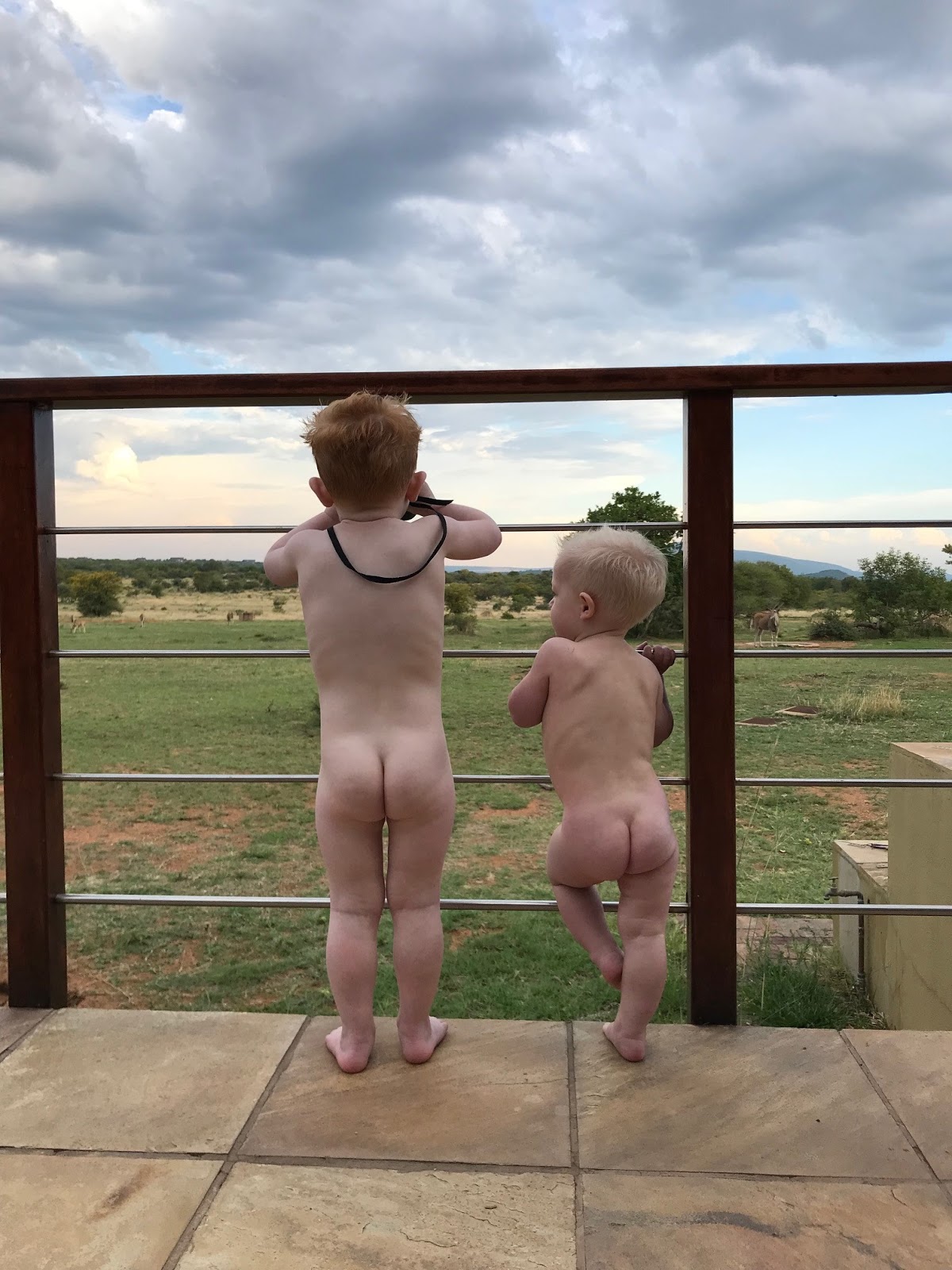 My sweet South African family told me the pool was cold. It wasn’t cold per se, but it certainly wasn’t warm either. Rather than busting out the swimsuits for the boys, they opted to skinnydip because, why not? When in Rome…or South Africa. Ryan and I put our suits on and hopped in with the boys, watching the impressive rain clouds roll in. And yes, South Africa does get rain, and we were in the middle of a very rainy start to summer, which offered impressive thunderstorms and great clouds (and rainbows!)

We only stayed two days there, but we wished we could have stayed longer. The boys swam everywhere they could. When the wind was a bit too chilly for our own pool, we headed to the clubhouse for slightly warmer water temps. Spencer was in heaven because we purchased his first set of water wings, and now he feels like a fish. As a swammer, myself, I know this is a double-edged sword, but I think it will help him feel more comfortable in the water, which is ultimately the goal. 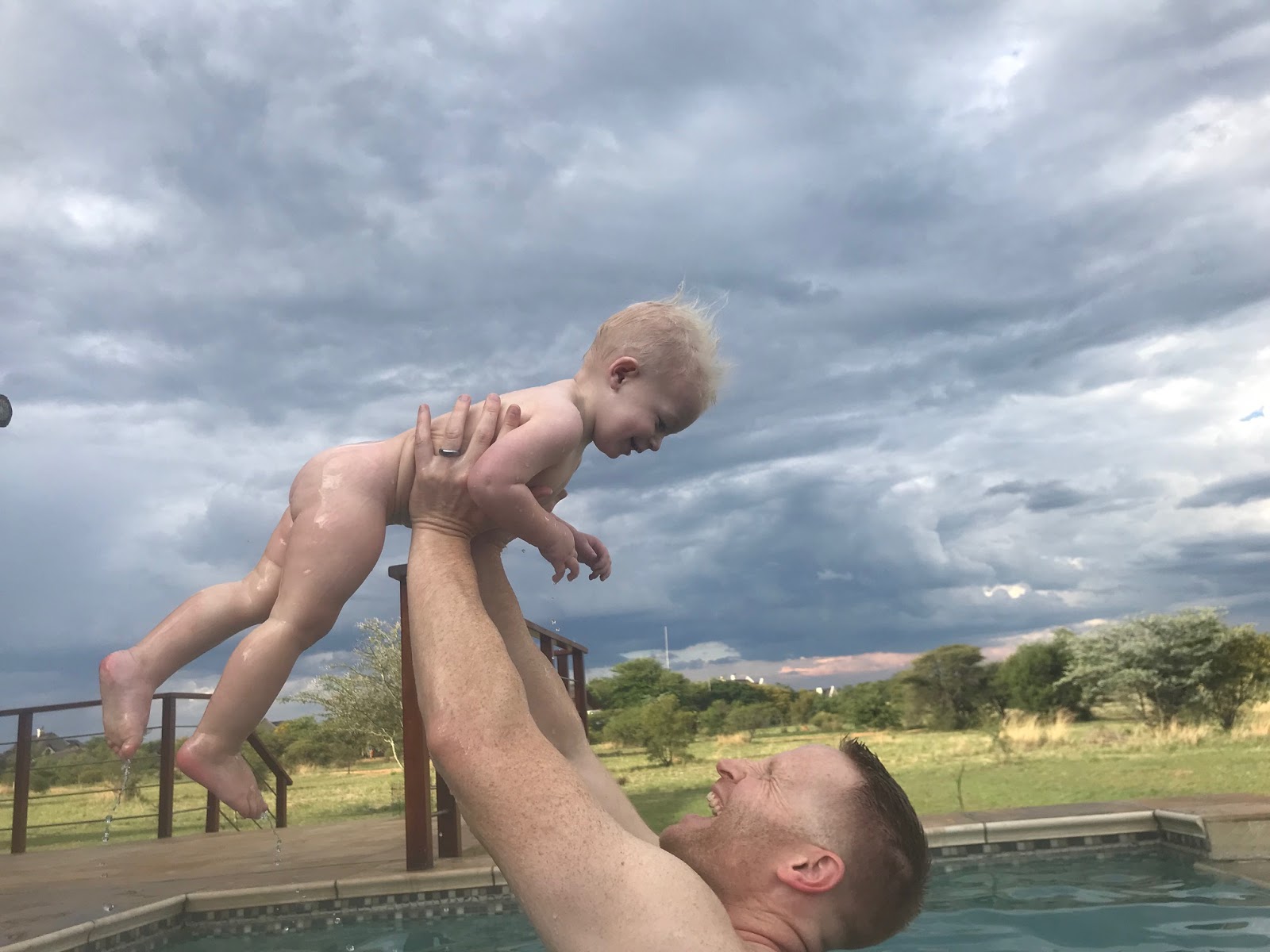 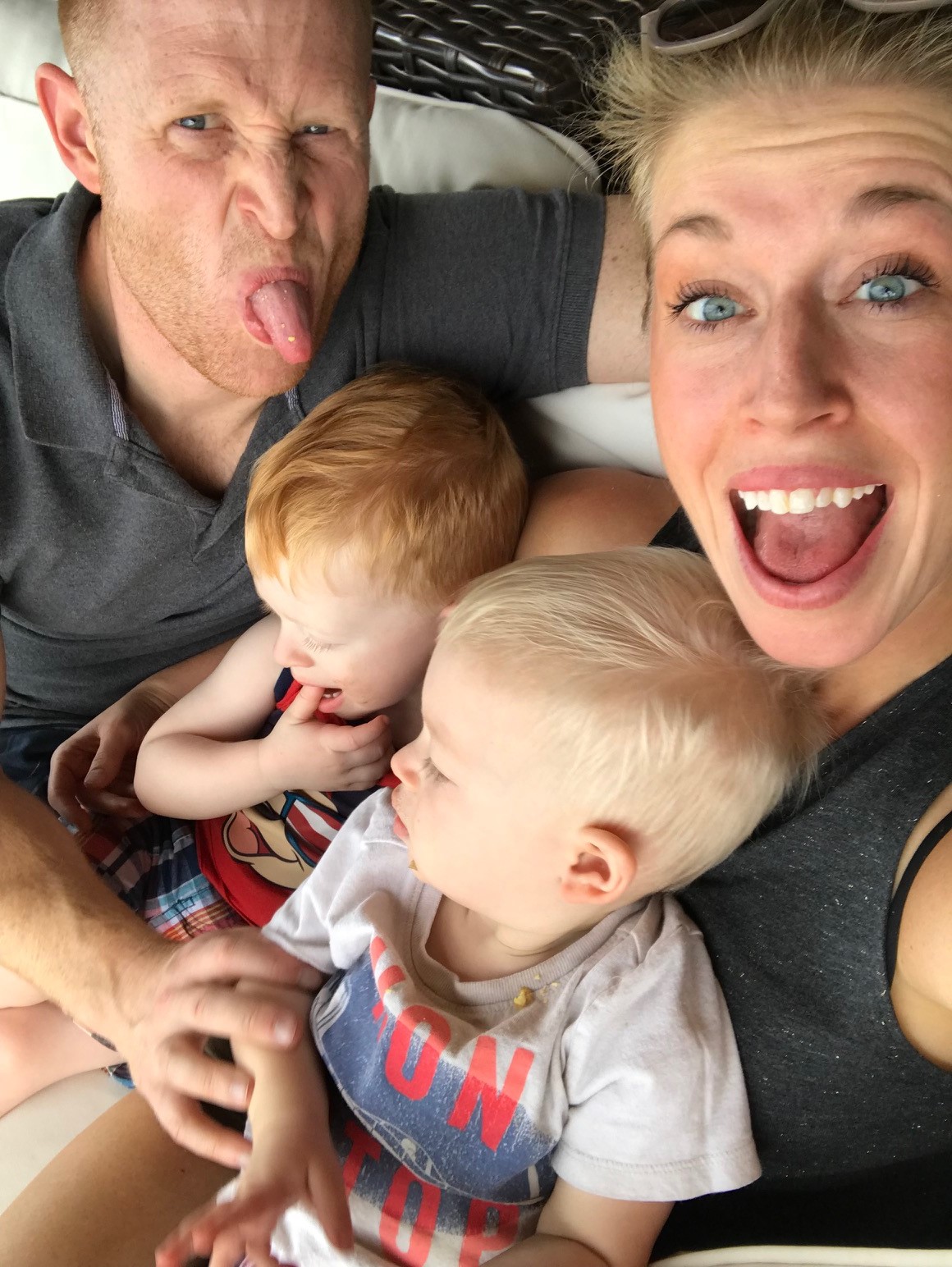 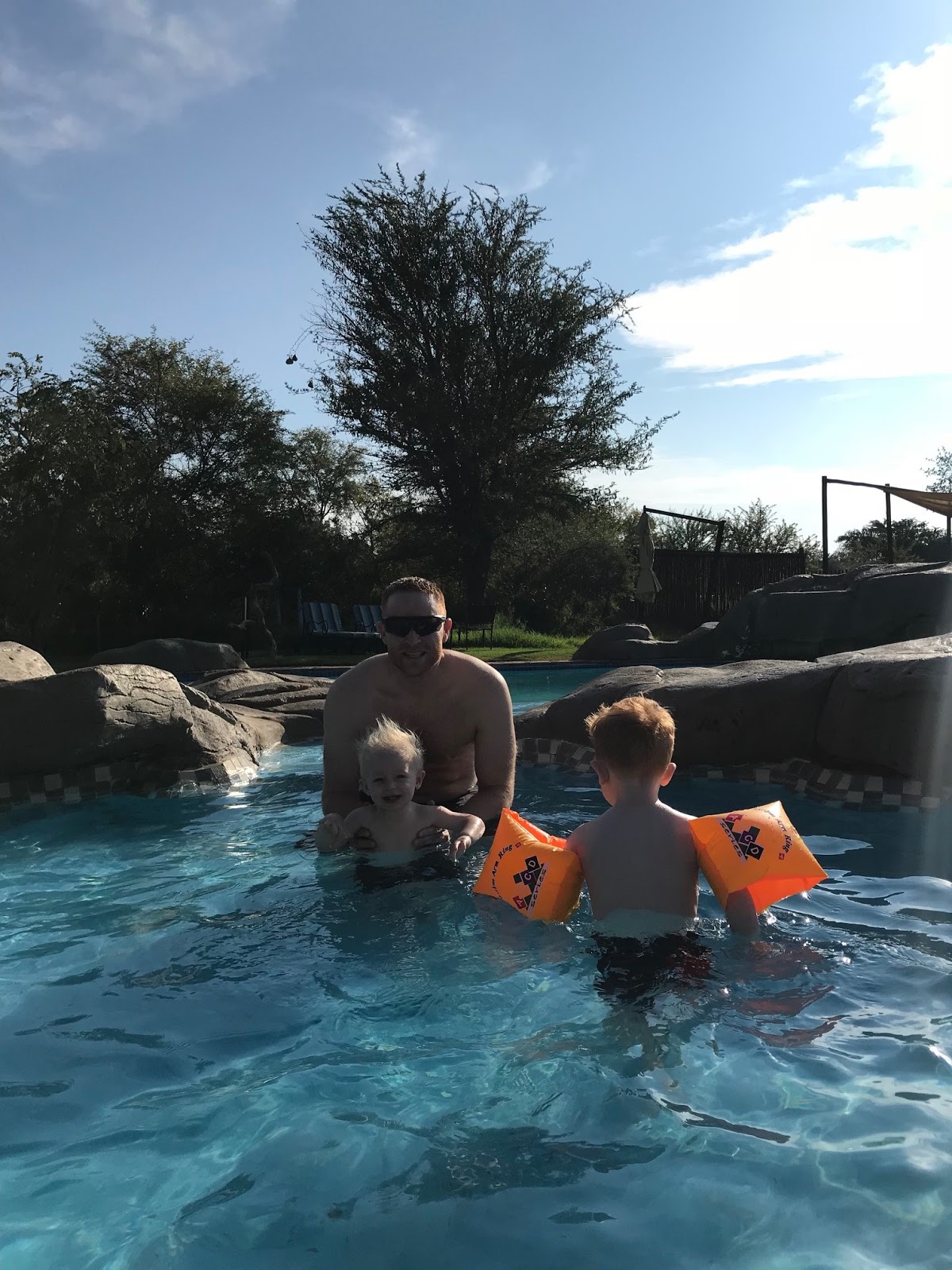 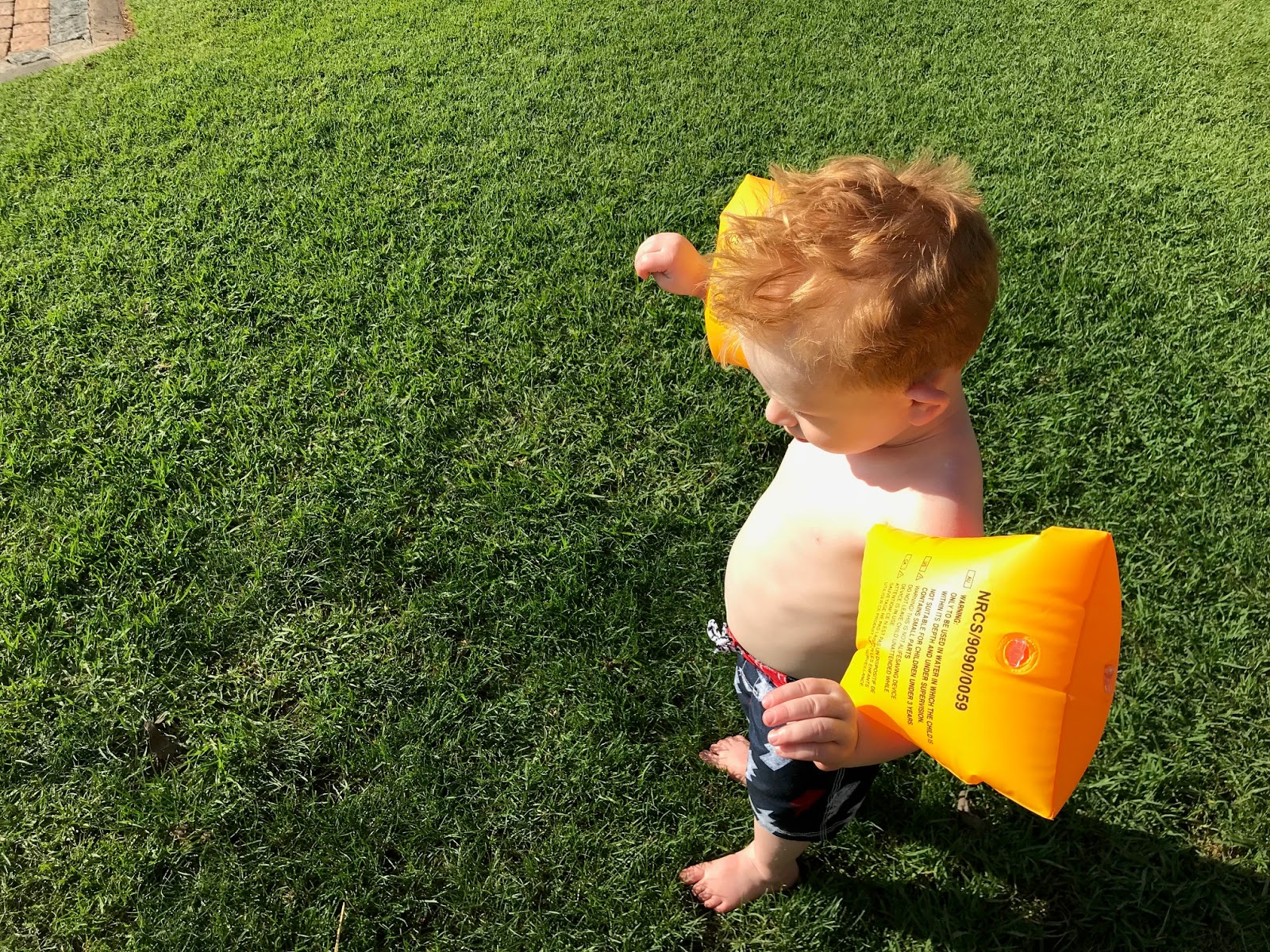 Ryan was finally able to turn off his phone and just set it away for three whole weeks. Despite the horrific spiders (omg, seriously South Africa, no), we enjoyed a couple nights with a great cuppa, or a sip or ten of wine under the stars. Plus, is there anything better than a warm cup of coffee on the verandah as you watch the sun come up? I think not.

I also managed to get a run in while we were there. It was just about 5k, but I ran into some giraffes while we were there! Giraffes are notoriously shy animals, and they steer clear of loud noises. Naturally, that means they avoid toddler noise. Because I was running alone though, I encountered them on one of the back roads of the estate, and then I waited until they were comfortable enough to walk away from me. No, they’re not aggressive, but you don’t want to make them scared around their little ones – and there are a lot of little ones right now! 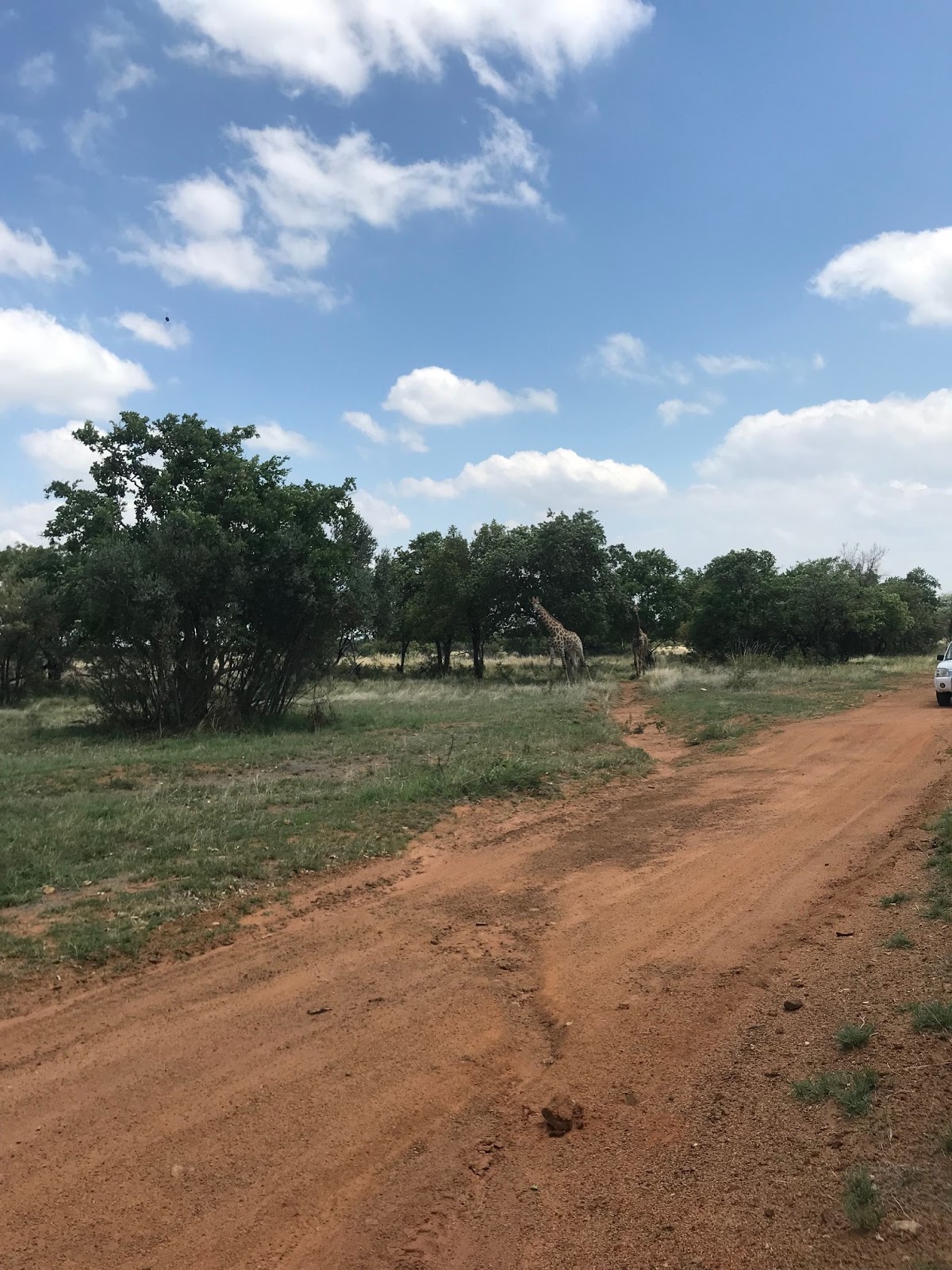 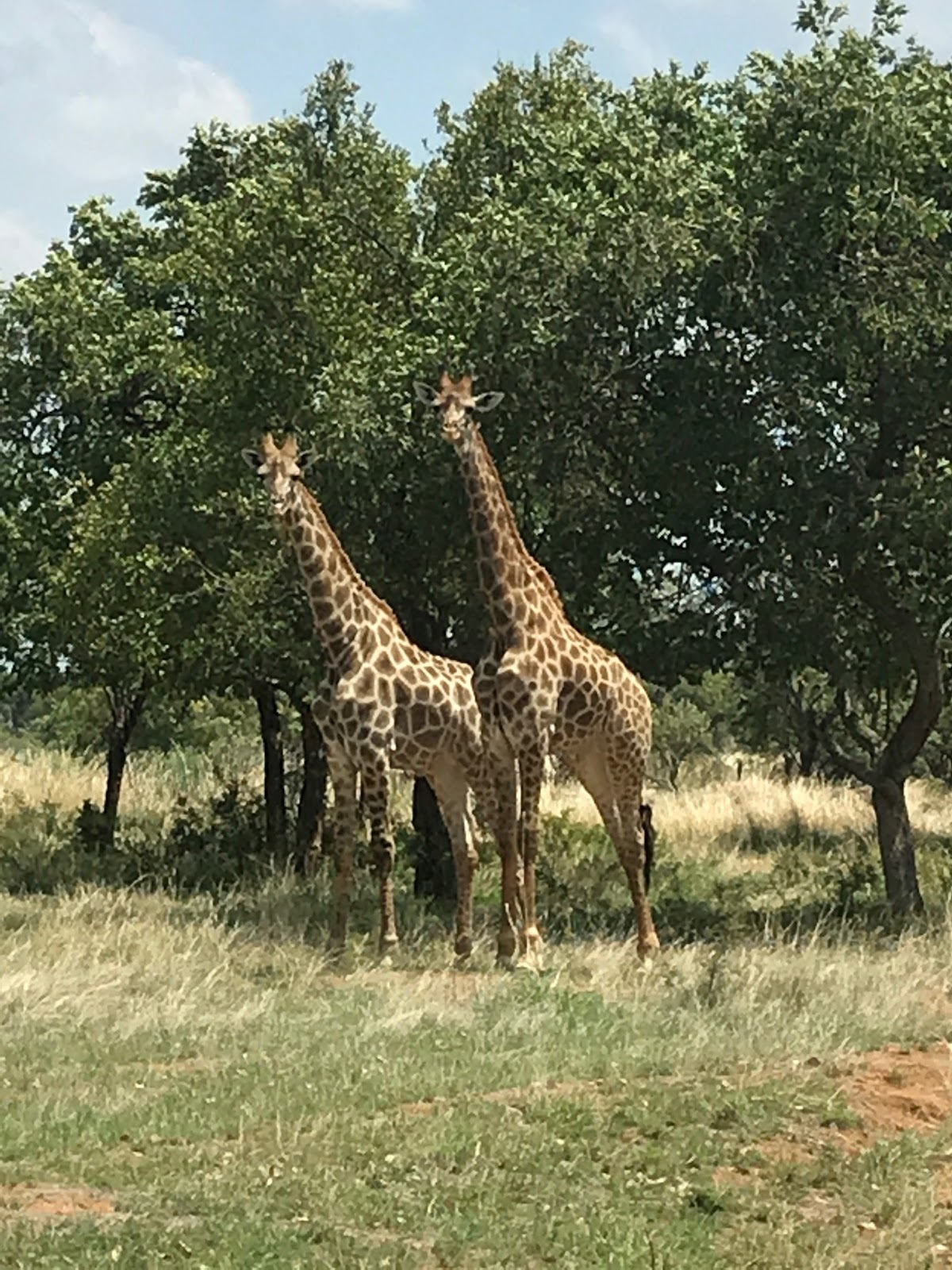 Honestly, it was the perfect start to our trip, and we wish we could have stayed longer! It was quiet, calm, and the boys could run amuck all they wanted. Yes, that’s the absolute perfect combination of all the things. Next time we go, I think we’ll insist upon a week there before anything else.

We have a lot more to share about our trip in the coming days including Cedar Junction, Krugersdorp, and more. I hope you’re not all burned off my travel stories by the time I’m done!