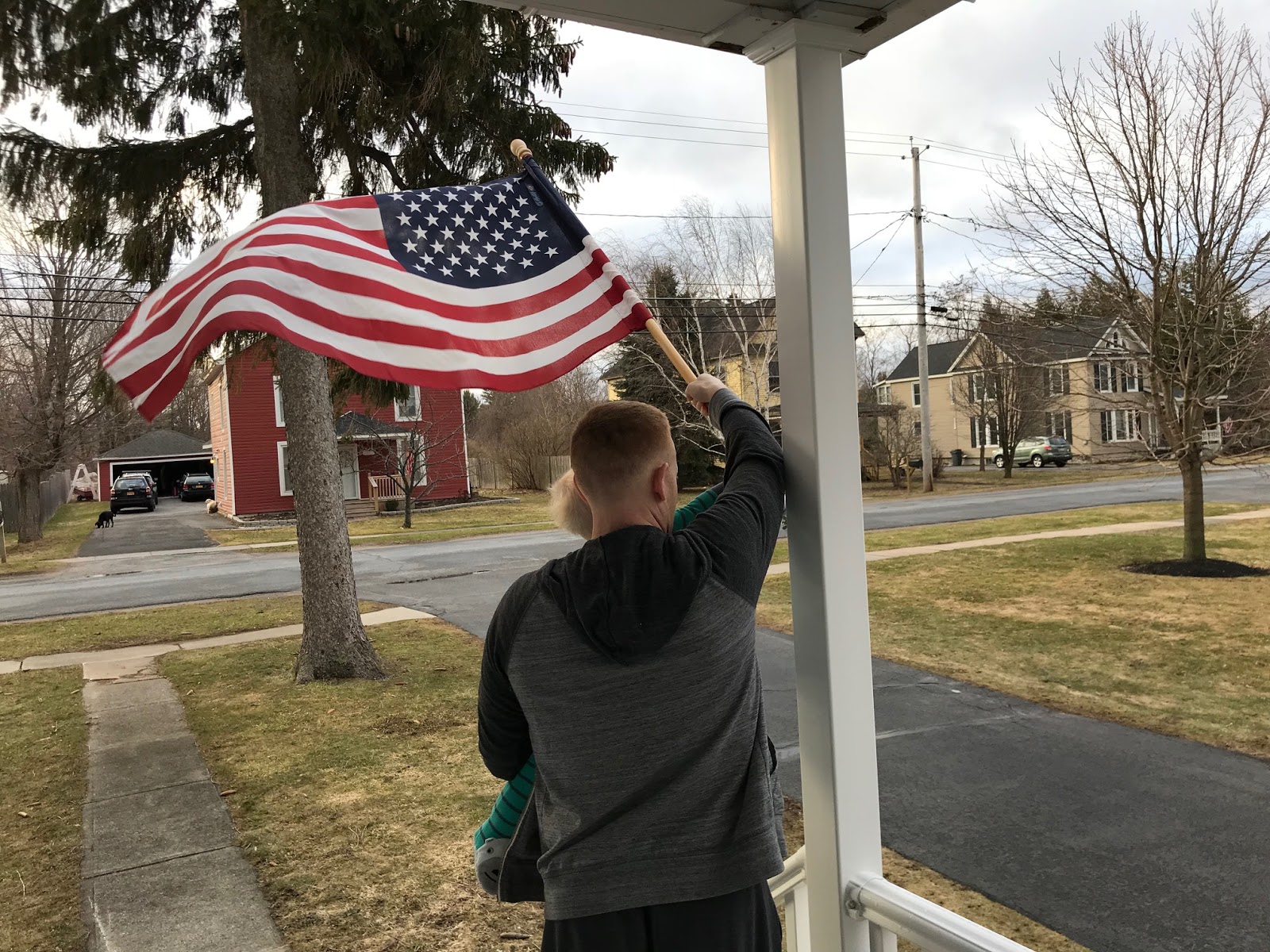 You know those weekends where the best-made plans fall through? This was one of those weekends – and yet, it was also one of the best weekends we’ve had in a long while. Spencer brought home some sickness last week, and it’s been making its way through the household. Porter started his fever Friday, and I felt absolutely awful Saturday. Poor Ryan was hit pretty hard yesterday. Even though we’d planned to go to Syracuse and weren’t able, we still had so much fun, and that’s kind of what made this weekend so special.

On Saturday, none of us were feeling particularly great, but the weather was beautifully springy, so Spencer and I got outside to decorate some eggs and play with Lindsey across the street for a while. It still hits me sometimes that he’s not a toddler anymore. He’s a real little boy. He’s articulate, thoughtful, smart, and engaged, and he’s always on the go. Together, we tackled dyeing Easter eggs (which failed miserably) but were so fun in the process. Pro-tip: if you see someone mention that Cool-Whip will work in place of shaving cream for this Pinterest task, don’t listen to them. It doesn’t. Oh well, it was fun 🙂 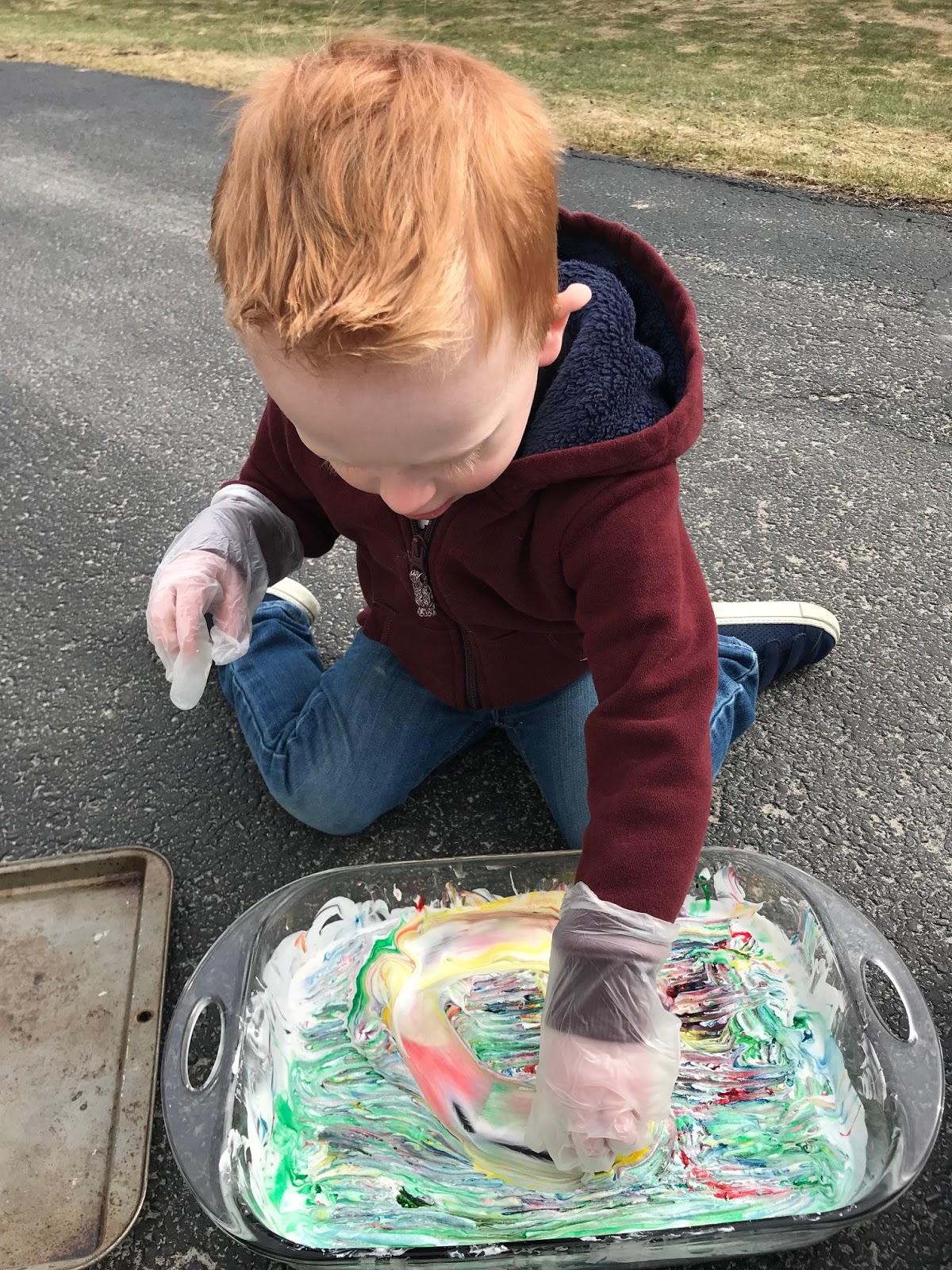 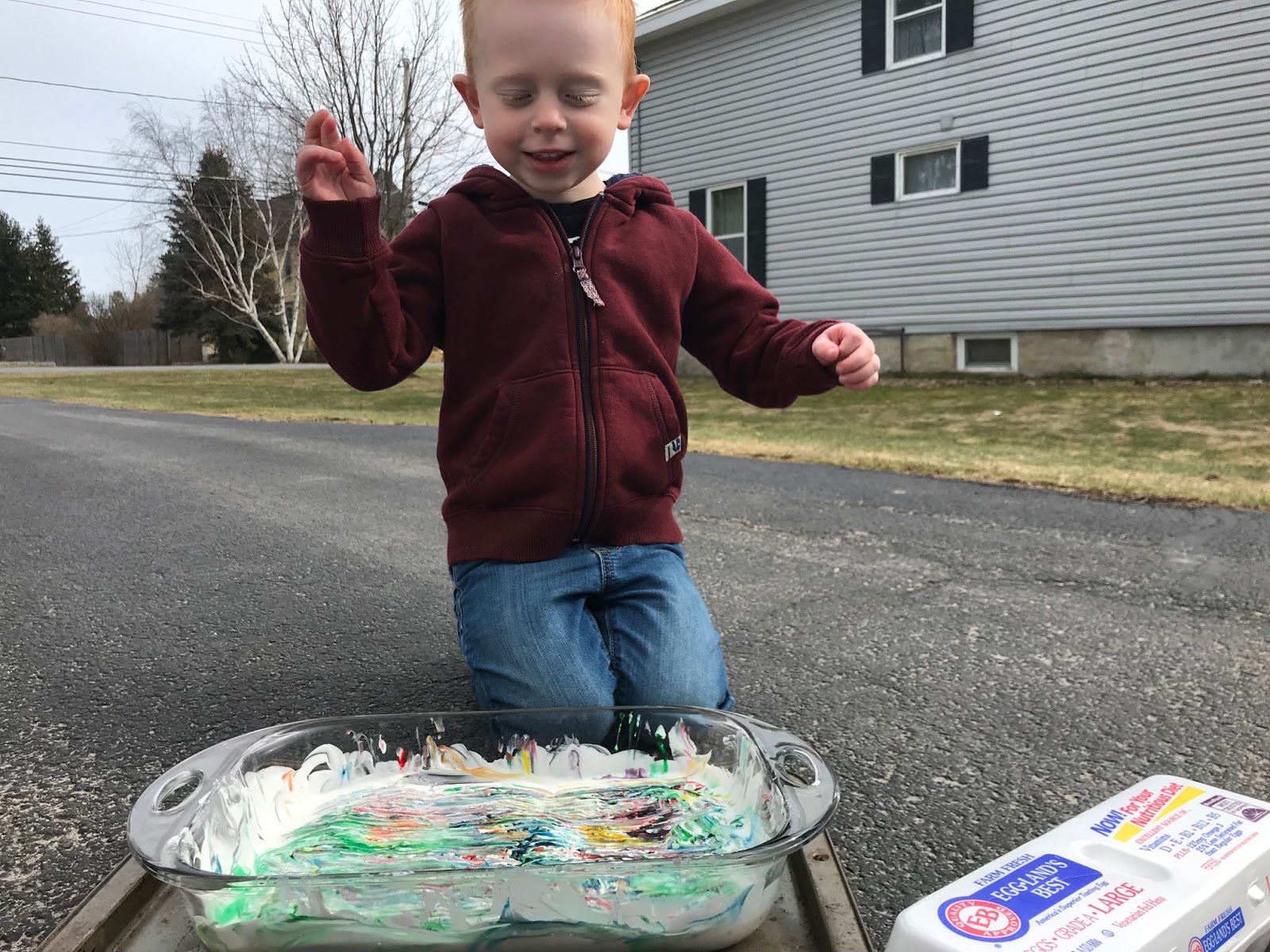 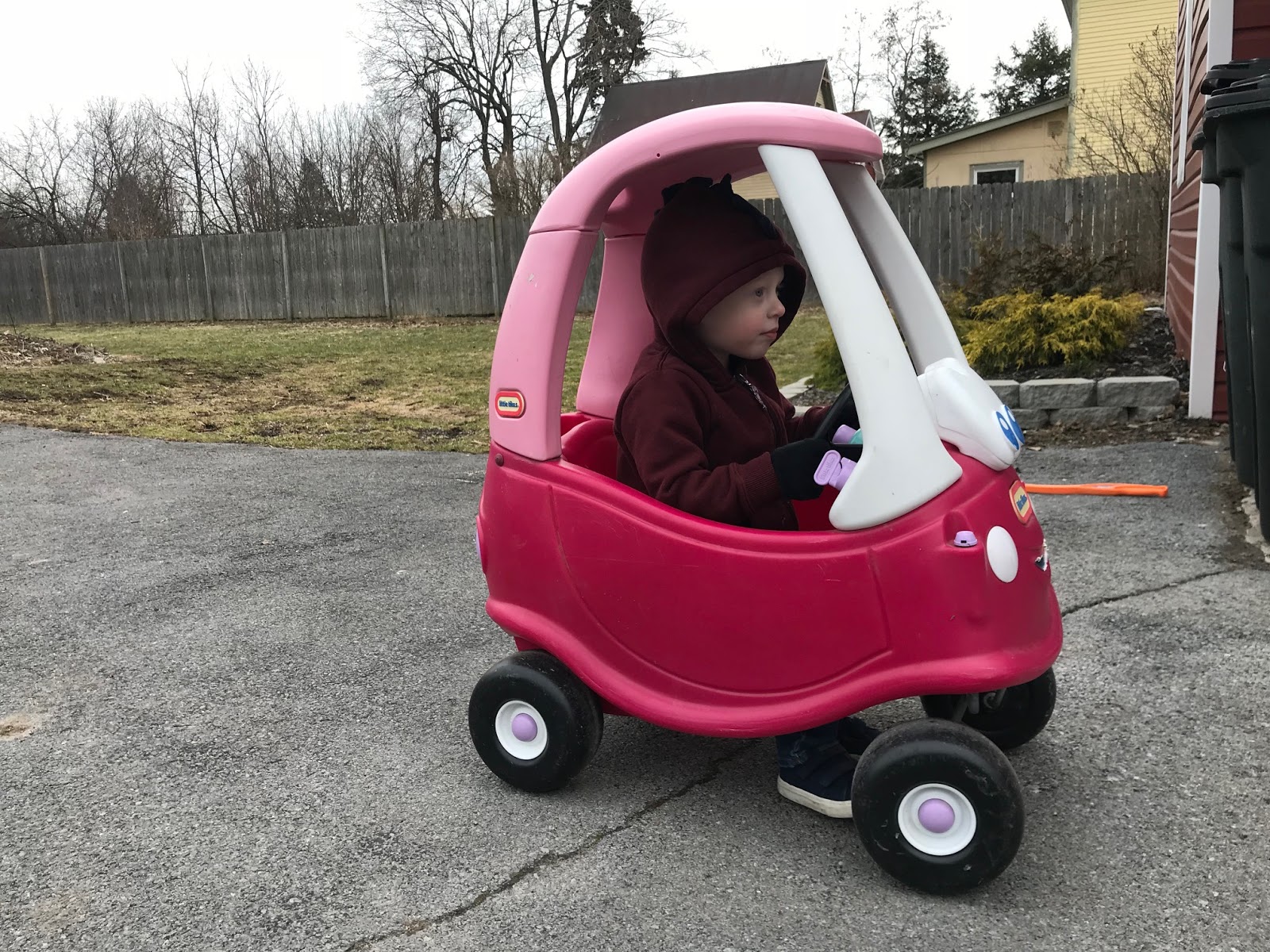 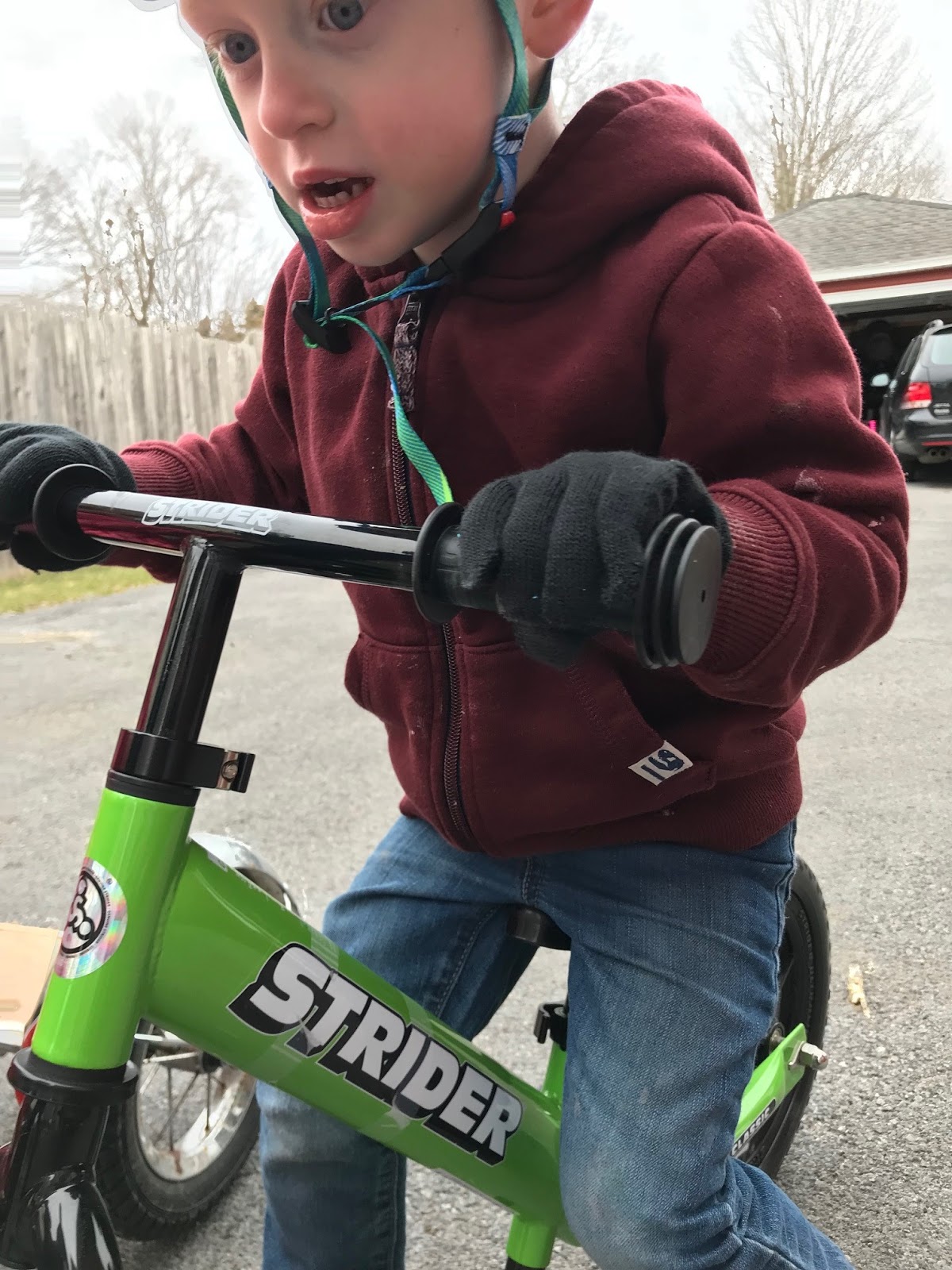 Sunday was Easter, and Mother Nature and New York decided it would be below freezing all day. We Were all still feeling awful, too, so we decided to forgo the traditional Easter egg hunt in favor of just laying low and enjoying each other’s company. Besides their new tradition of going outside to put the flag out each morning, we stayed indoors…together. The boys absolutely loved their Easter baskets this year, and I just wanted to take a moment to talk about them because I’m pretty proud.

We try not to give the boys too much candy. They love it, and what kid doesn’t, but we also believe in moderation. So, I wanted their Easter baskets to be more engaging if you will. We put sidewalk chalk, a coloring book, a little Paw Patrol car, a couple of treats, stickers, and more in their baskets. And you know what? They loved it! Spencer is obsessed with is his new toy, which cost less than $3, their coloring books were a huge hit, and they loved the stickers, too. There’s something about a more modest Easter basket that just speaks to me. In a world of excess, it’s simple, sweet, and fun. 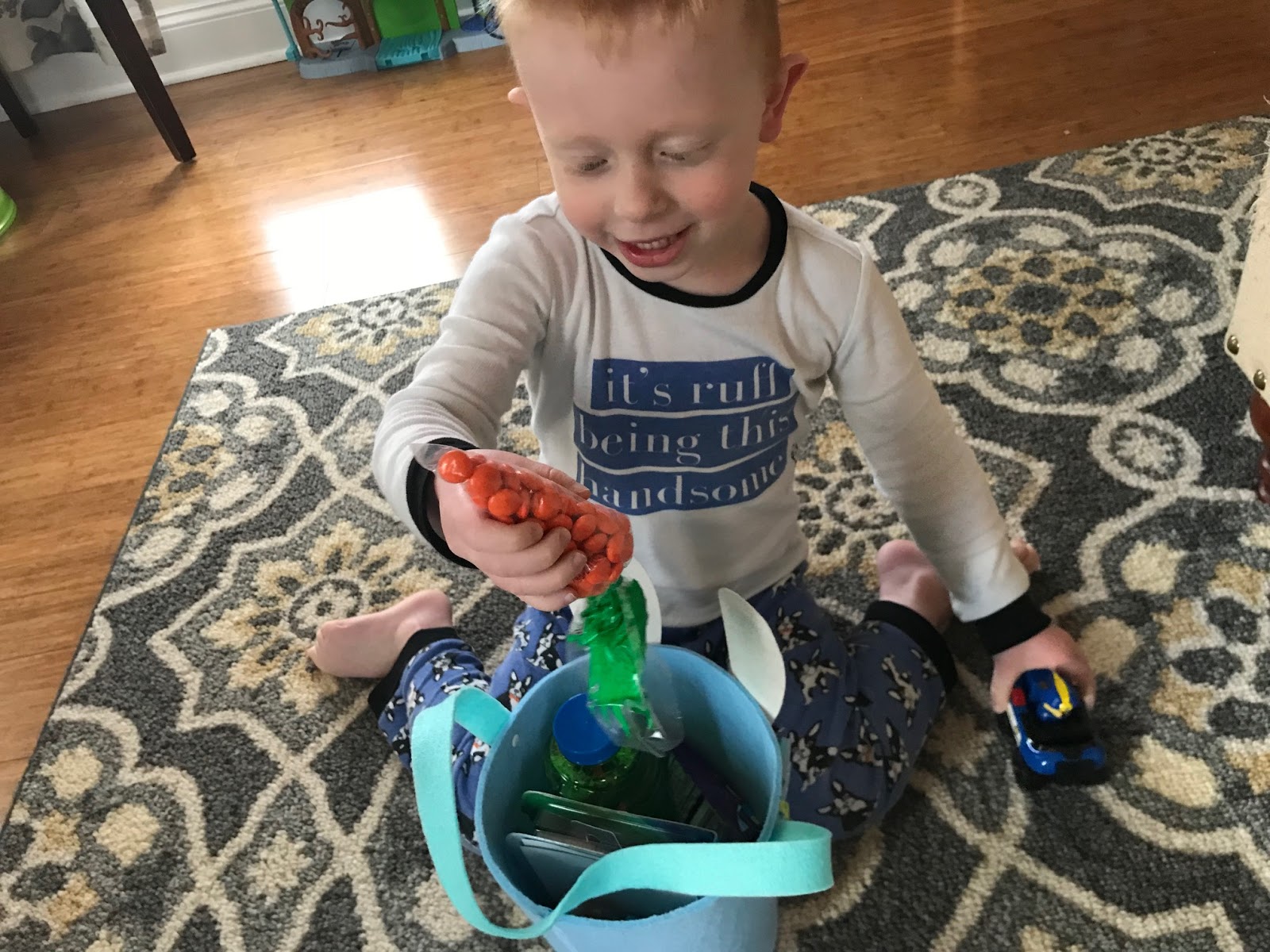 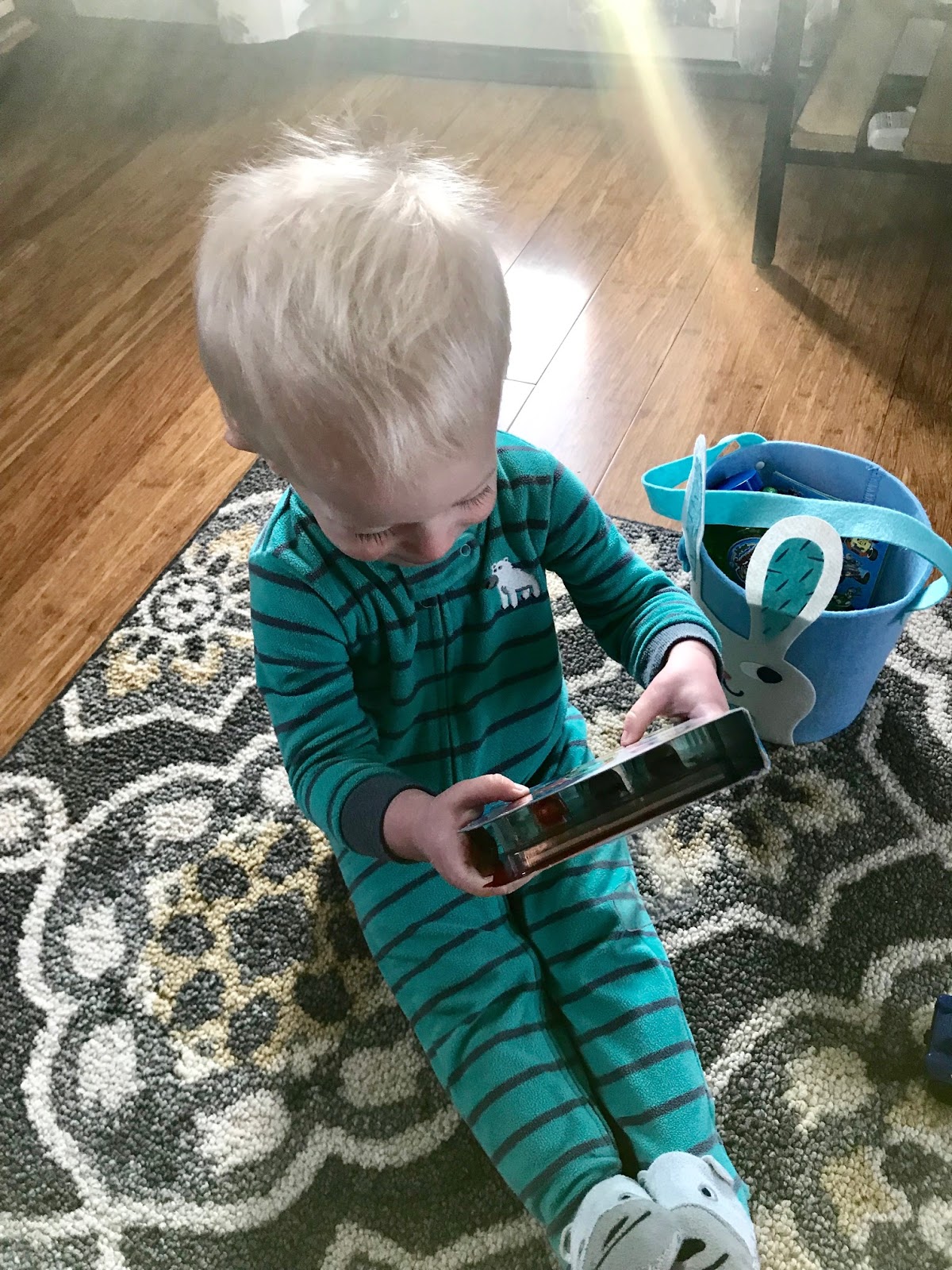 After we opened our baskets, we knew we weren’t really going anywhere because all of us felt awful. So, instead of lounging on the couch doing nothing, the boys and I decided to build a fort. We pulled all the dining chairs to the living room, brought all available throw blankets out, and we got to work. It was one of the simplest, funniest, most entertaining things we’ve done in a while. I mentioned last week that we’re working towards minimizing TV usage here, and this is another great indoor activity you can use! The boys didn’t want to watch TV once. They were too busy playing and exploring. Letting them be little and enjoying the little things is so, so sweet. 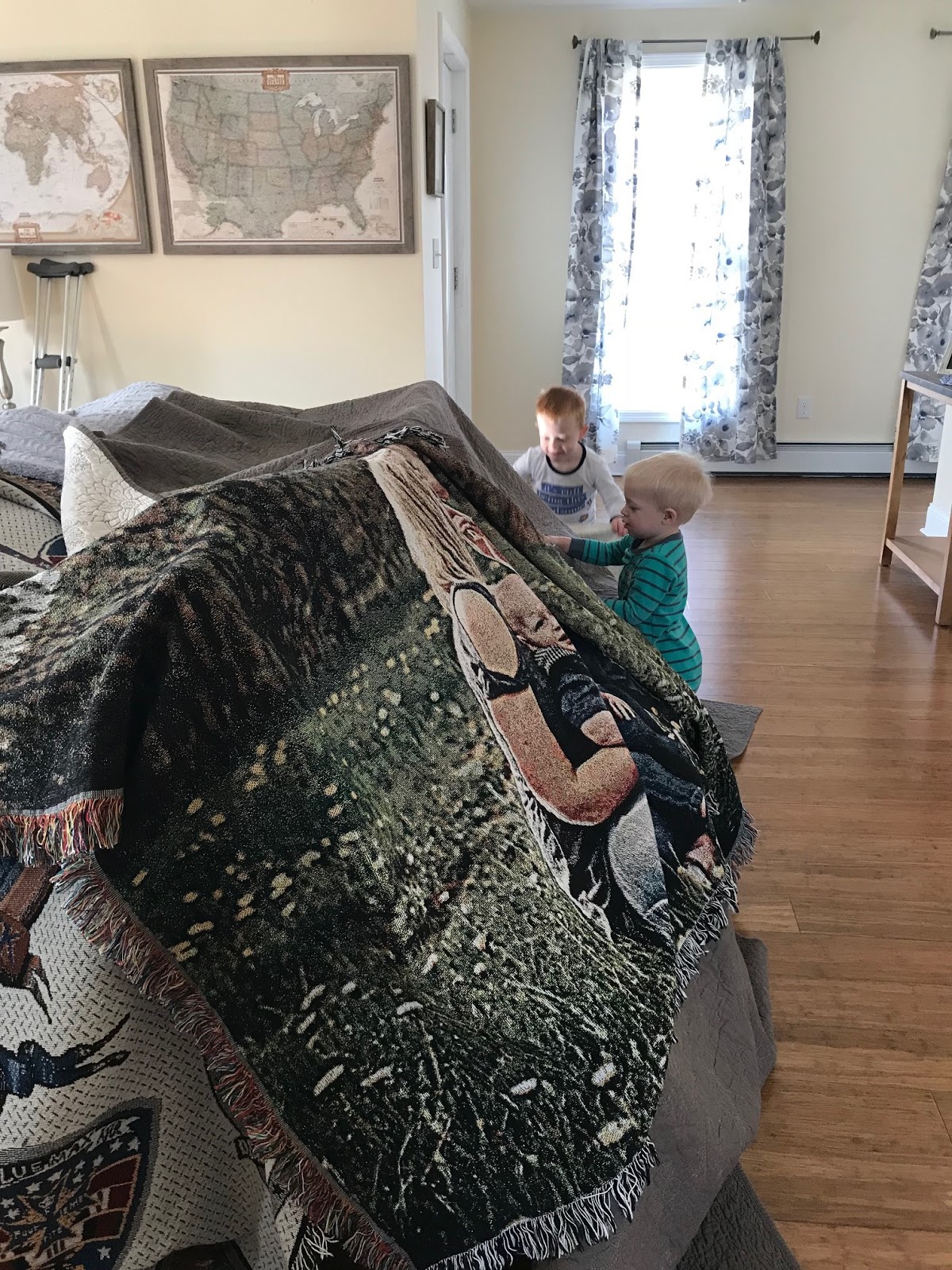 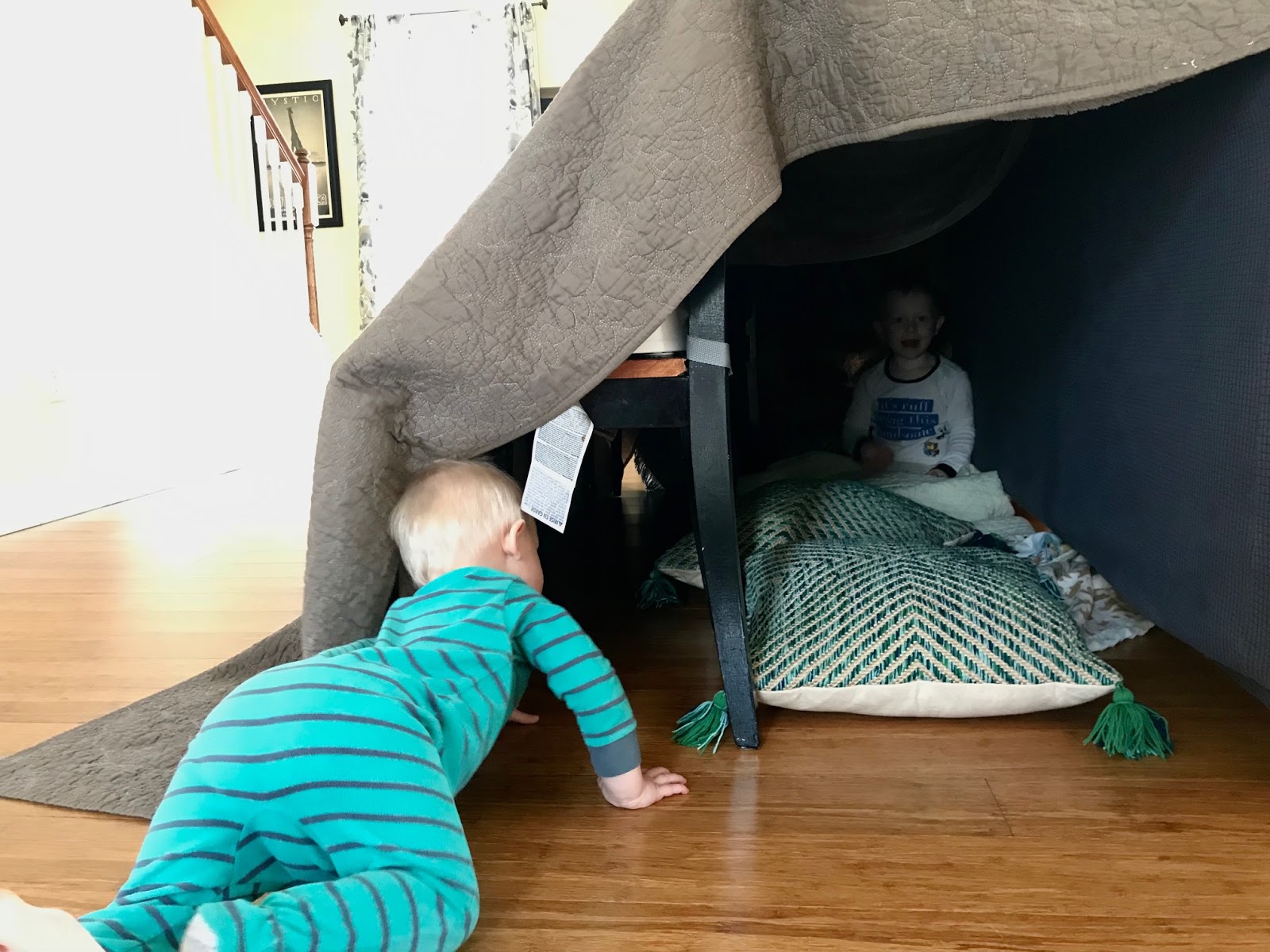 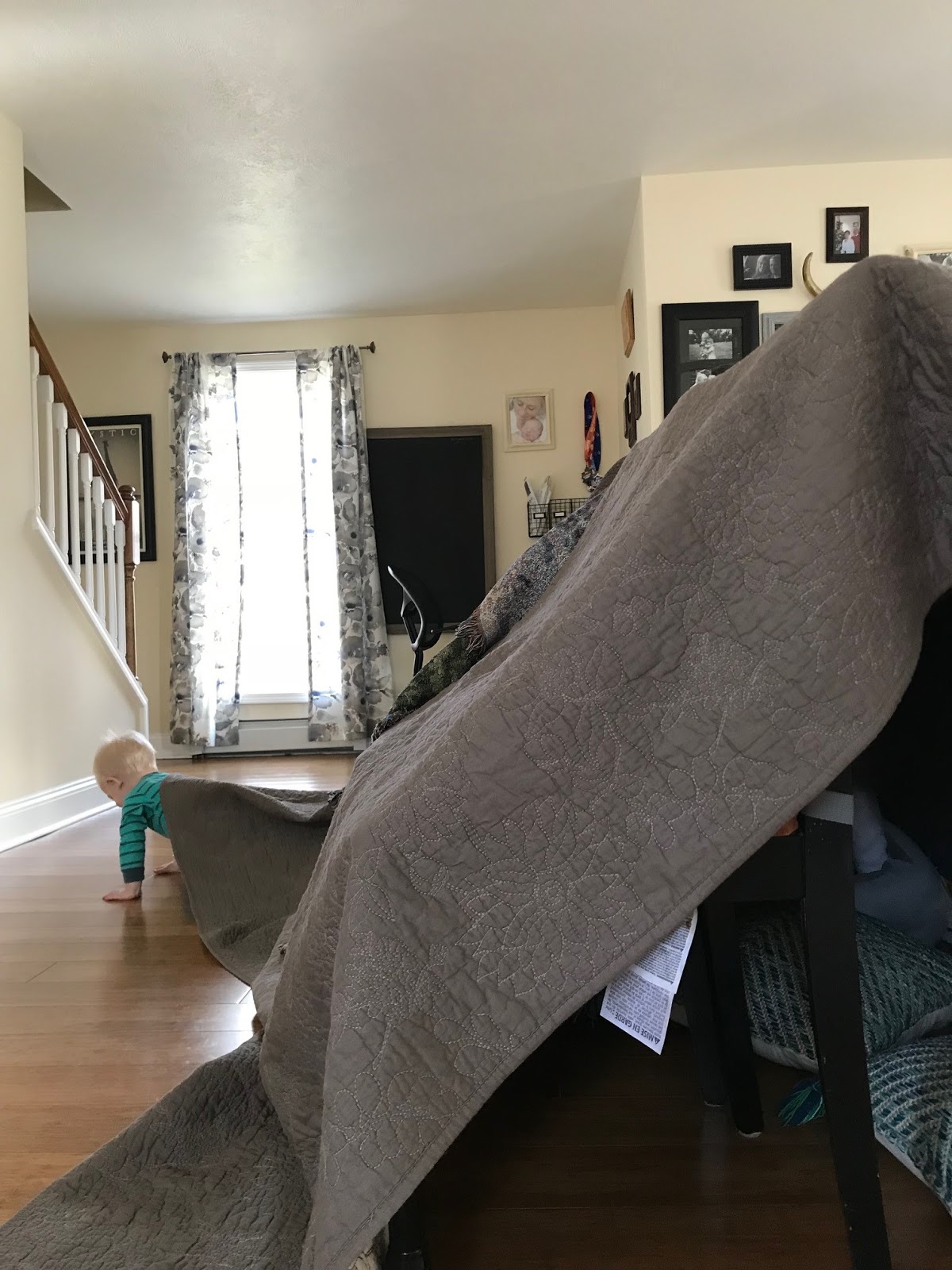 We have two months left in New York, and maybe I’m just waxing nostalgic because of that, but this time here – as hard as it’s been – has also been beautiful and fun. We’ve made memories. We’ve lived a lot, and we’ve grown together. This past Easter was beautiful in its simplicity, and I’m so thankful for little moments like these that remind us of what really matters.

I hope you all had a beautiful Easter weekend and are as ready for spring as I am!