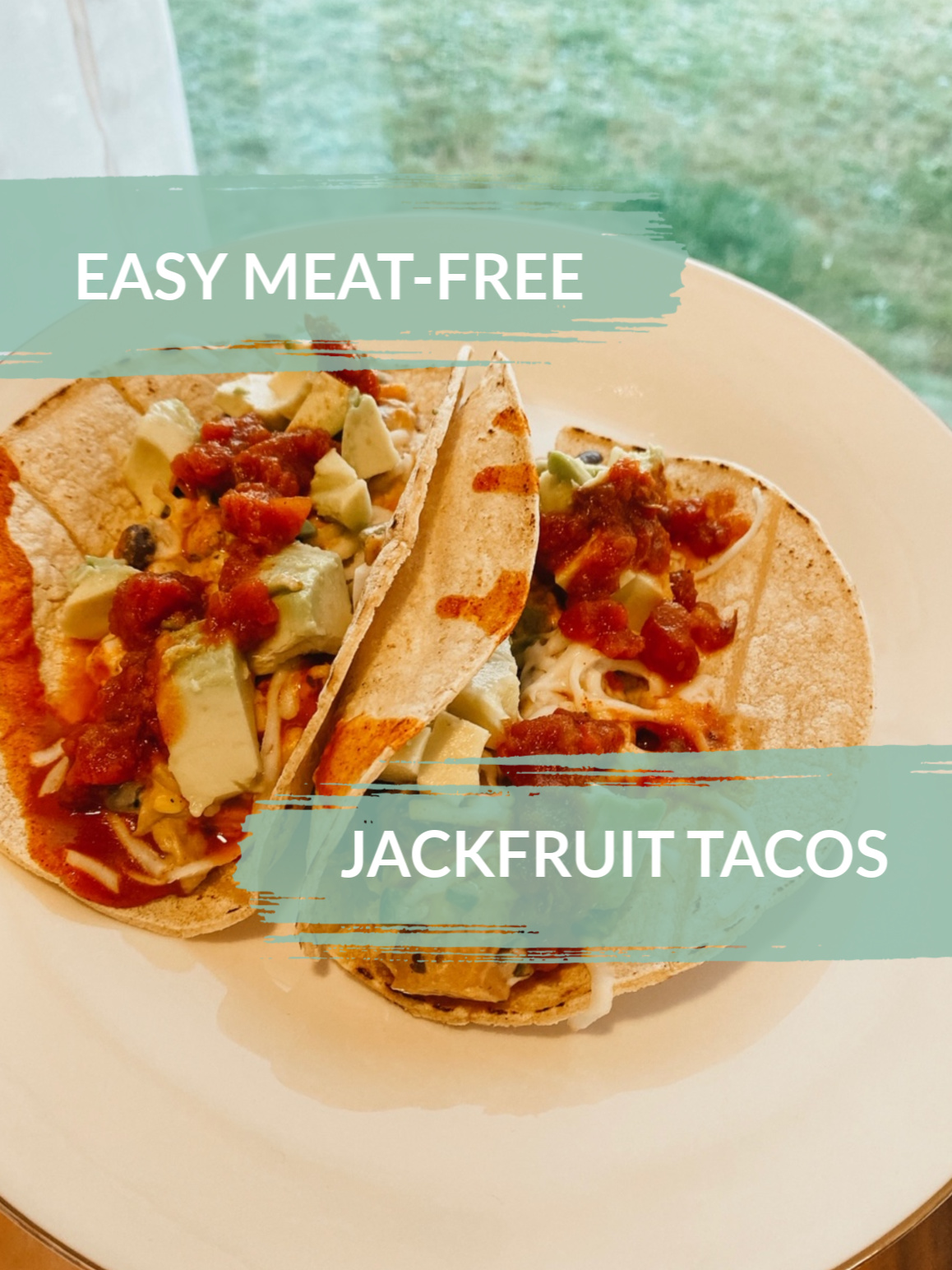 Ryan and I recently watched the controversial Netflix documentary, The Game Changers, which only served to add some fuel to the fire of getting healthy as a household. You might remember that before Ryan got home, I decided to go meat-free for 30 days. Truth? I failed. I got really close, but I ended up eating chicken before those 30 days were up, and then I started eating meat and fish, mostly out of convenience again.

Since being diagnosed with Lyme Disease, however, I’ve been taking a more whole-body approach to my health. While, yes, I have a PICC line, Lyme Disease often presents like a chronic illness, and inflammation is a huge issue. So, on the advice of my doctor, I’m taking a combined approach between anti-inflammatory foods and modern medicine. Enter a primarily gluten-free, dairy-free, and meat-free diet. Lucky for me, Ryan is pretty much always ready and willing to embark on one of my adventures. 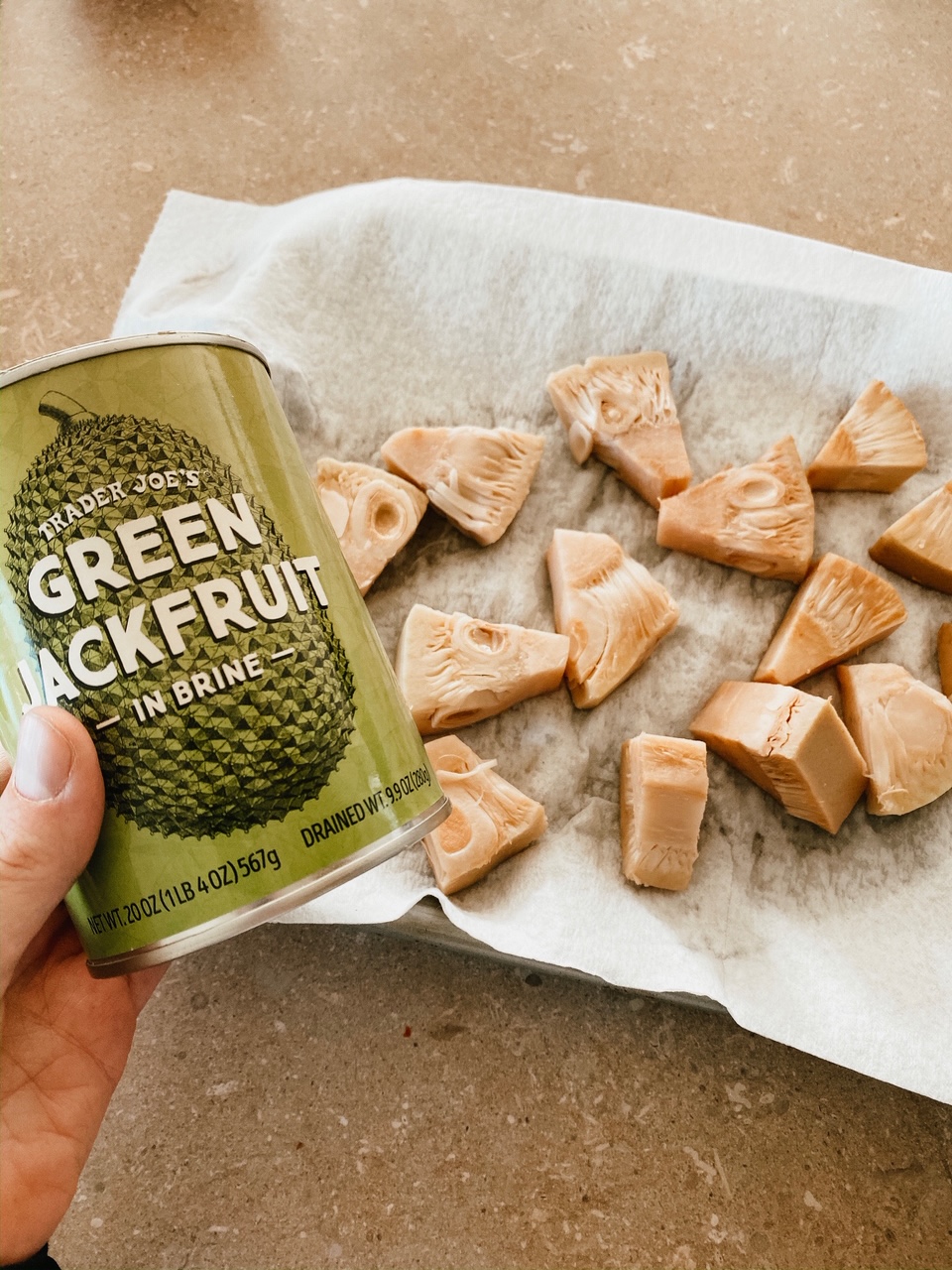 I read about jackfruit a while ago, but I was always a little bit scared to try it…until I did. Jackfruit, shockingly, mimics the taste and texture of meat in a lot of dishes, so I decided to give it a go with the full-family test. The goal was to make jackfruit enchiladas. Well, the tortillas I purchased didn’t rolls, so they became vegetarian jackfruit tacos. No worries – they were just as yummy!

I bought my jackfruit in brine at Trader Joe’s for cheap. Like $1.99 a can cheap. Even better? One can went a long way – enough to make a full batch of tacos for the whole family. The first step is simply to drain it. Once drained, I like to line mine on paper towels to get out the extra moisture, then I put it in a bowl and shred it with two forks – much like you’d shred chicken from a crockpot. 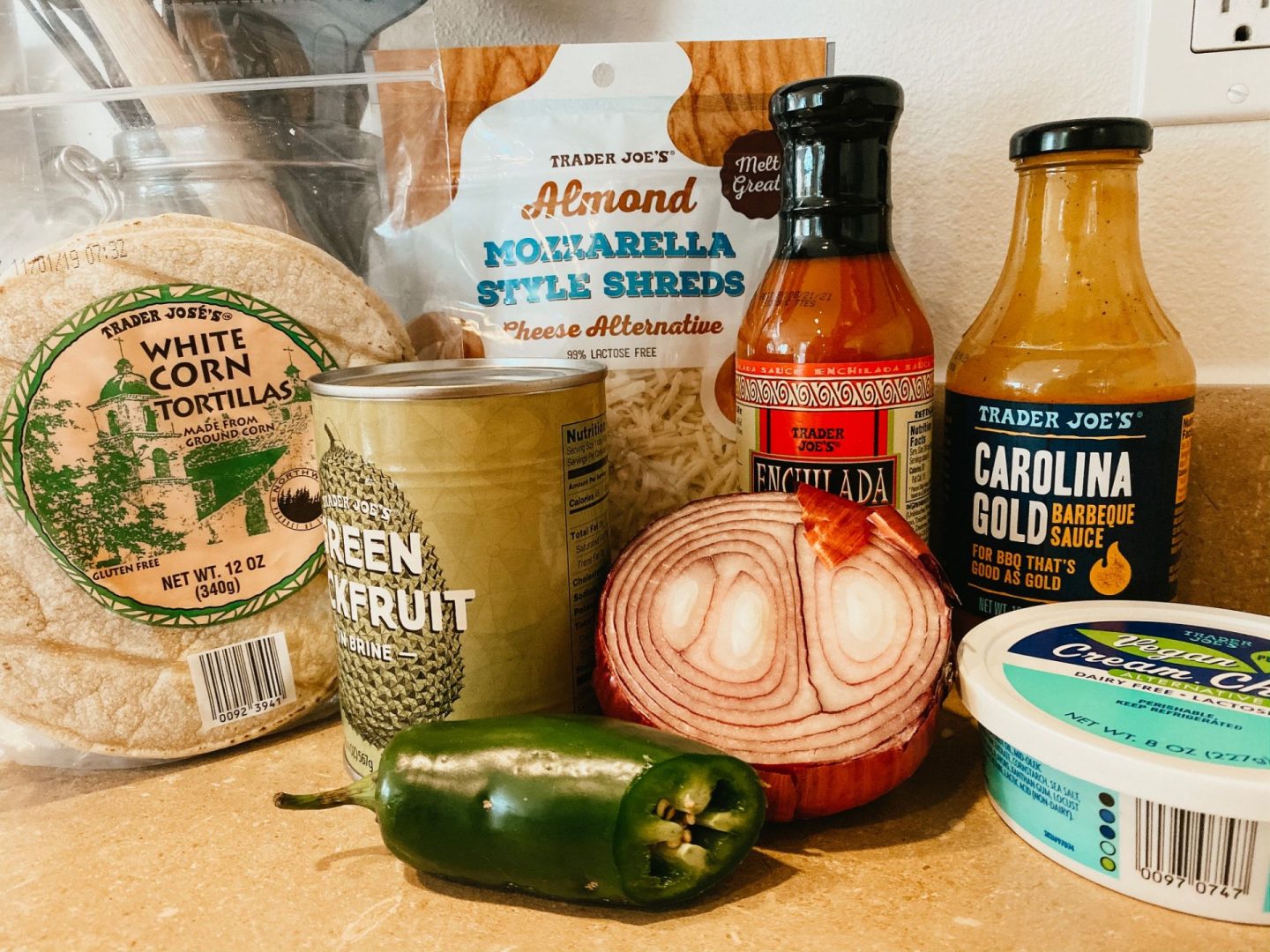 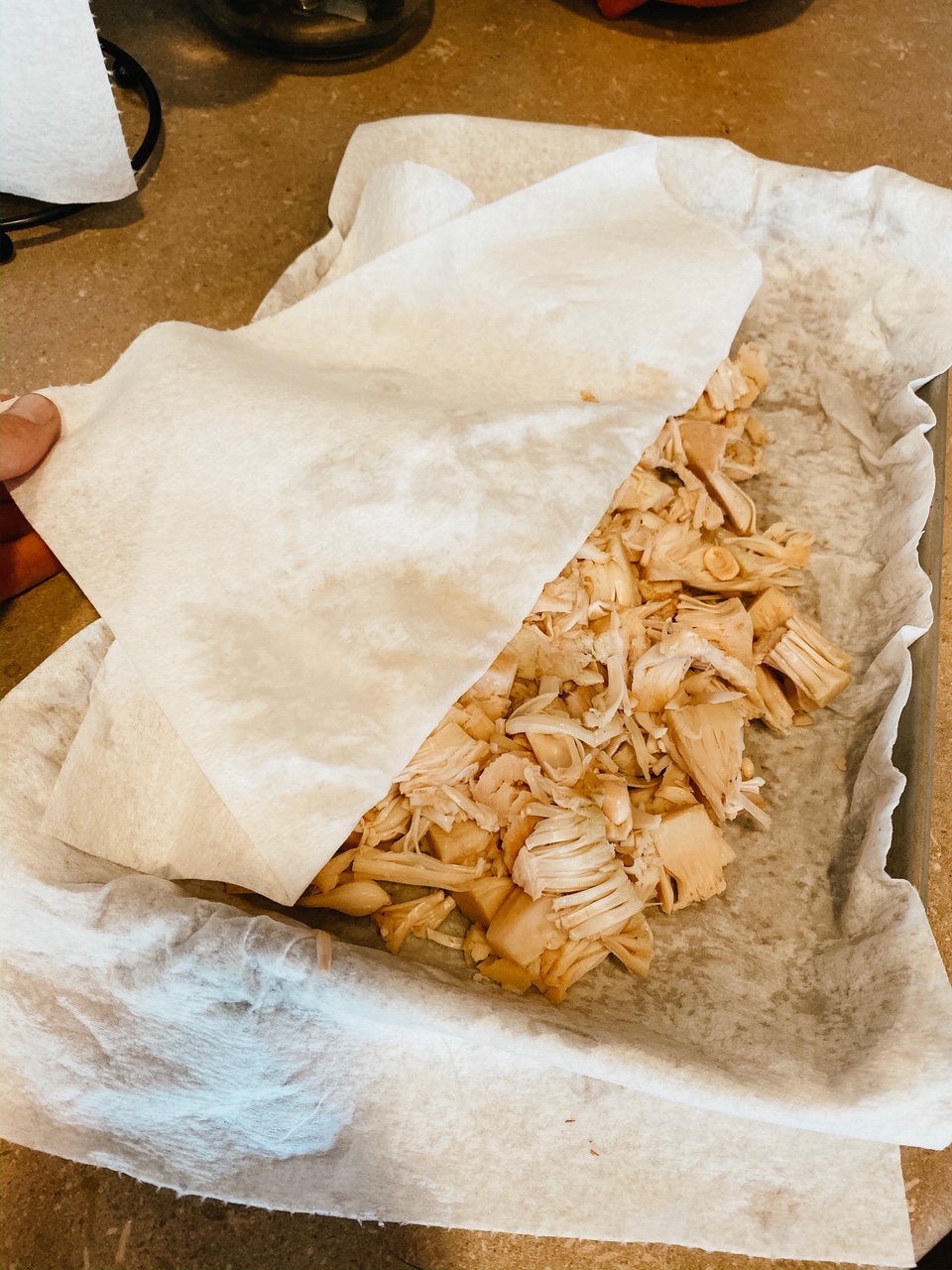 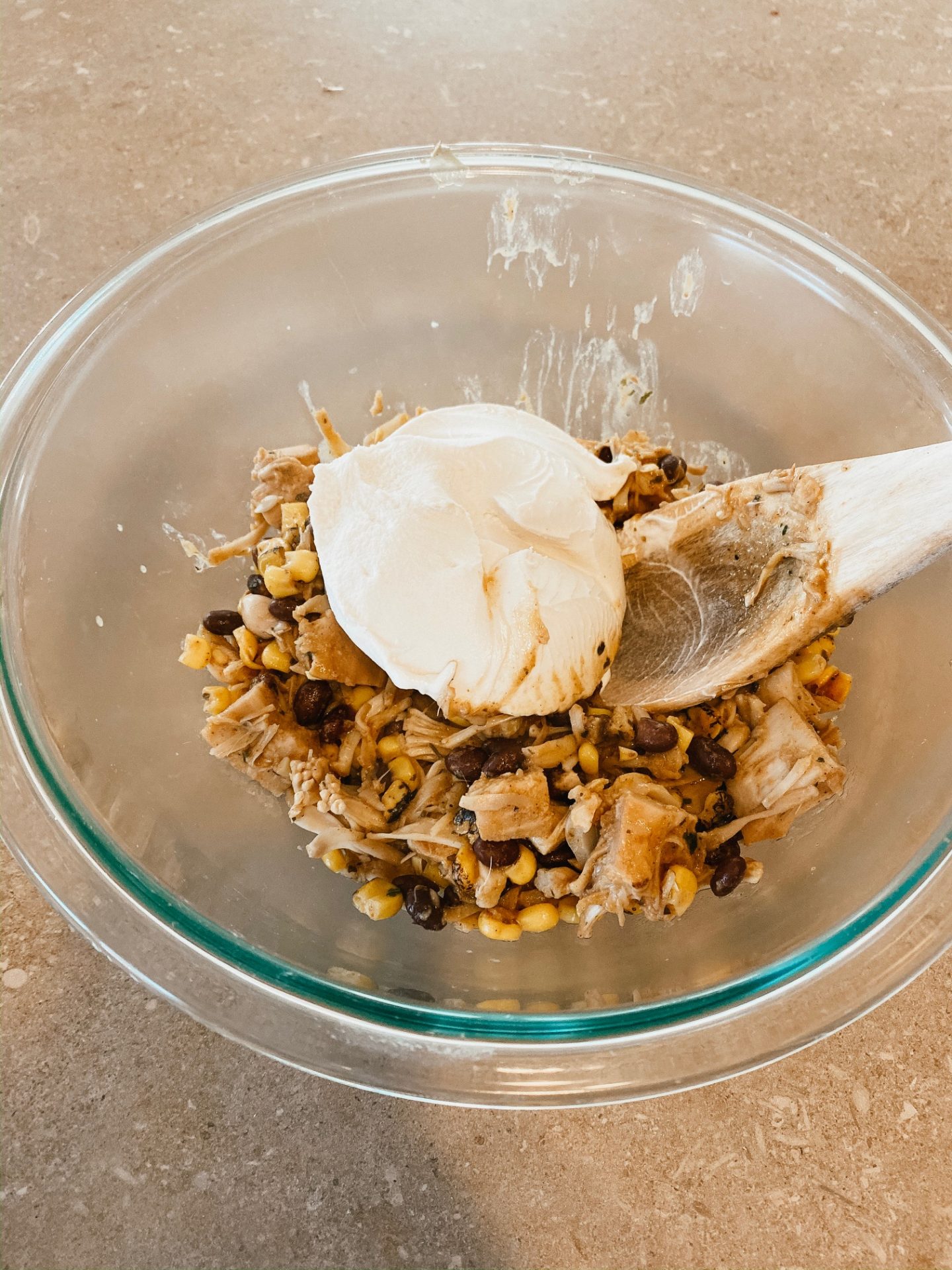 There will be small hard cores at the bottom. I like to discard those so as not to mess up the texture. Then, I put it in a pan over medium heat with one tablespoon of coconut oil and 1/2 a chopped red onion. Once its slowly simmering, I added 1/4 cup of Trader Joe’s Carolina Gold barbecue sauce for just a smidgeon of a kick, one can of drained black beans, and one can of corn. After simmering for about six minutes, I removed it from the heat and added a whole container of Trader Joe’s vegan cream cheese which, shockingly, tastes pretty darn good. Like I said, I was aiming for enchiladas, so this adds that creamy filling texture I was going for.

Once completely combined, I added one whole diced/uncooked jalapeno to the pot, then spooned the mixture onto gluten-free corn tortillas. Since I was aiming for dairy-free, I topped it with some almond shreds (I used these ones), and broiled the whole lot at 525 degrees for just five minutes. 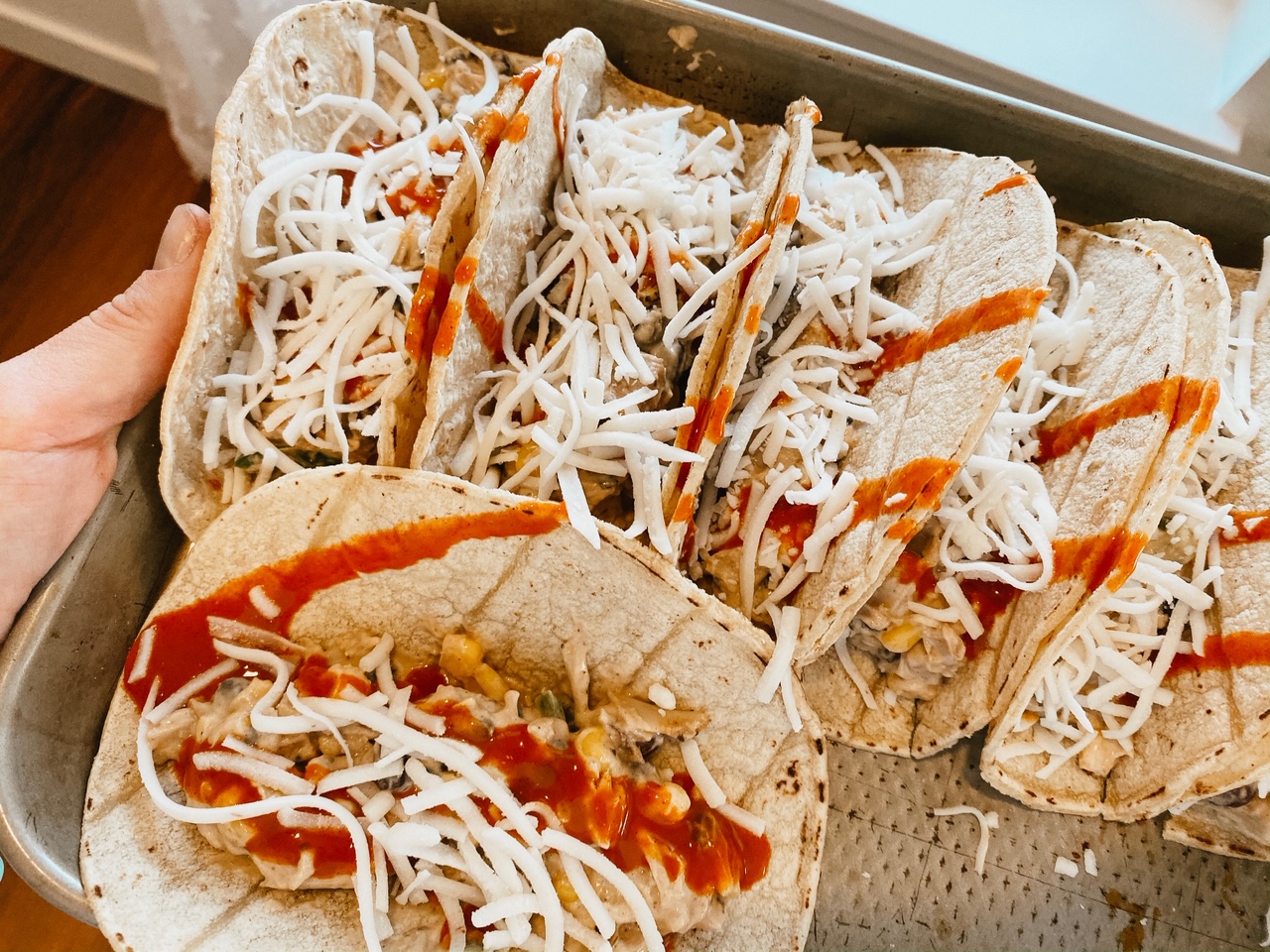 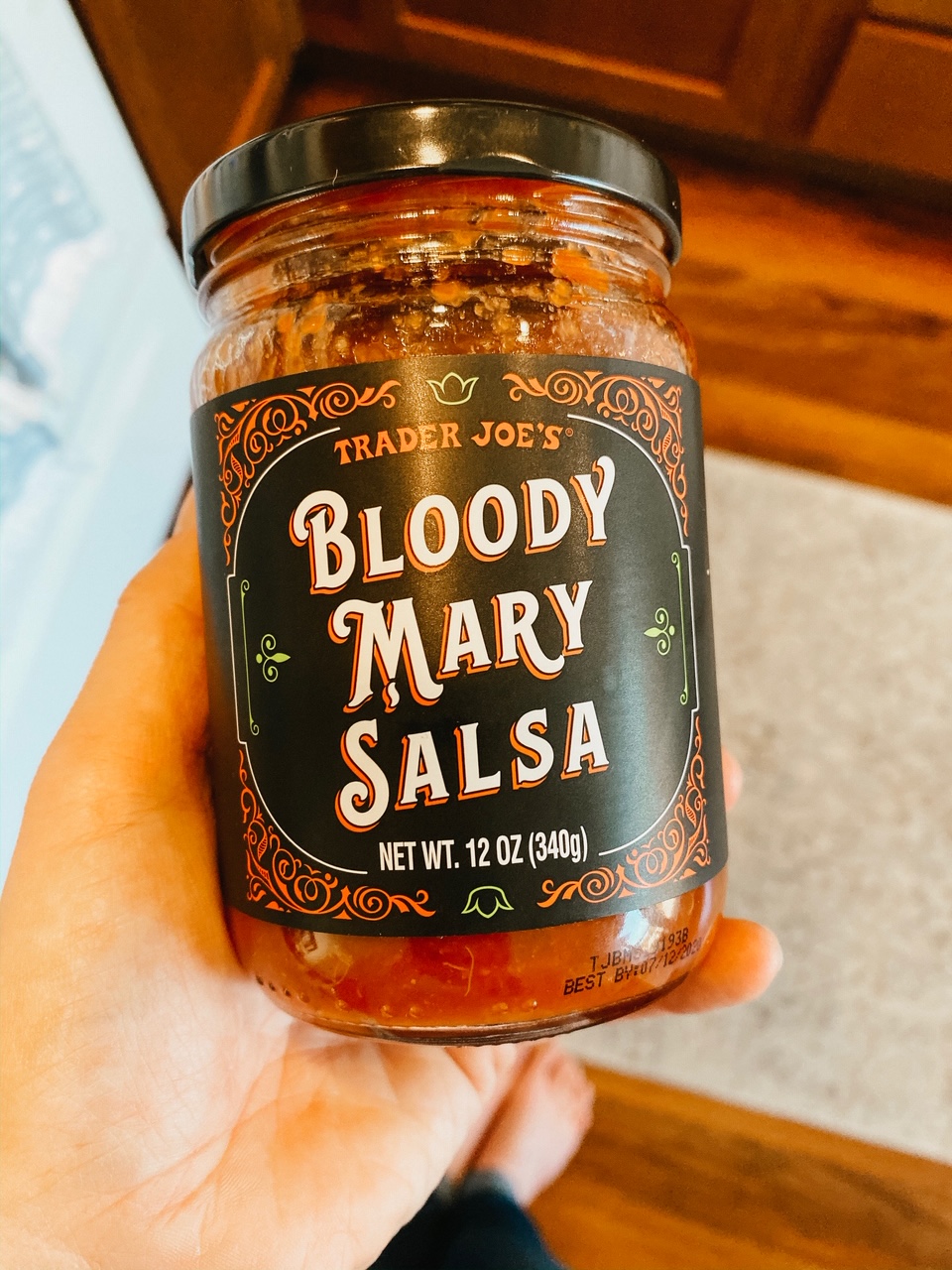 Topped with diced avocado, a smidge of enchilada sauce, and Trader Joe’s incomparable Bloody Mary Salsa, these vegetarian jackfruit tacos were divine. I thought that my kids would balk at the meat-free meal, but nope! They ate these like they were the most normal thing on the planet, and even Ryan cleared his plate. Don’t believe me? Try this recipe for yourself! Here’s what you’ll need:

1 can of jackfruit in brine

6-8 tortillas of your choice

I will never be a food photographer and, hell, I’ll never be a food blogger, but I will tell you that this recipe was a huge hit with the whole family. For those embarking on a meat-free journey, it’s an easy place to start, too, as this recipe only took about 45 minutes from start to finish.

Have you tried jackfruit before? What did you think?