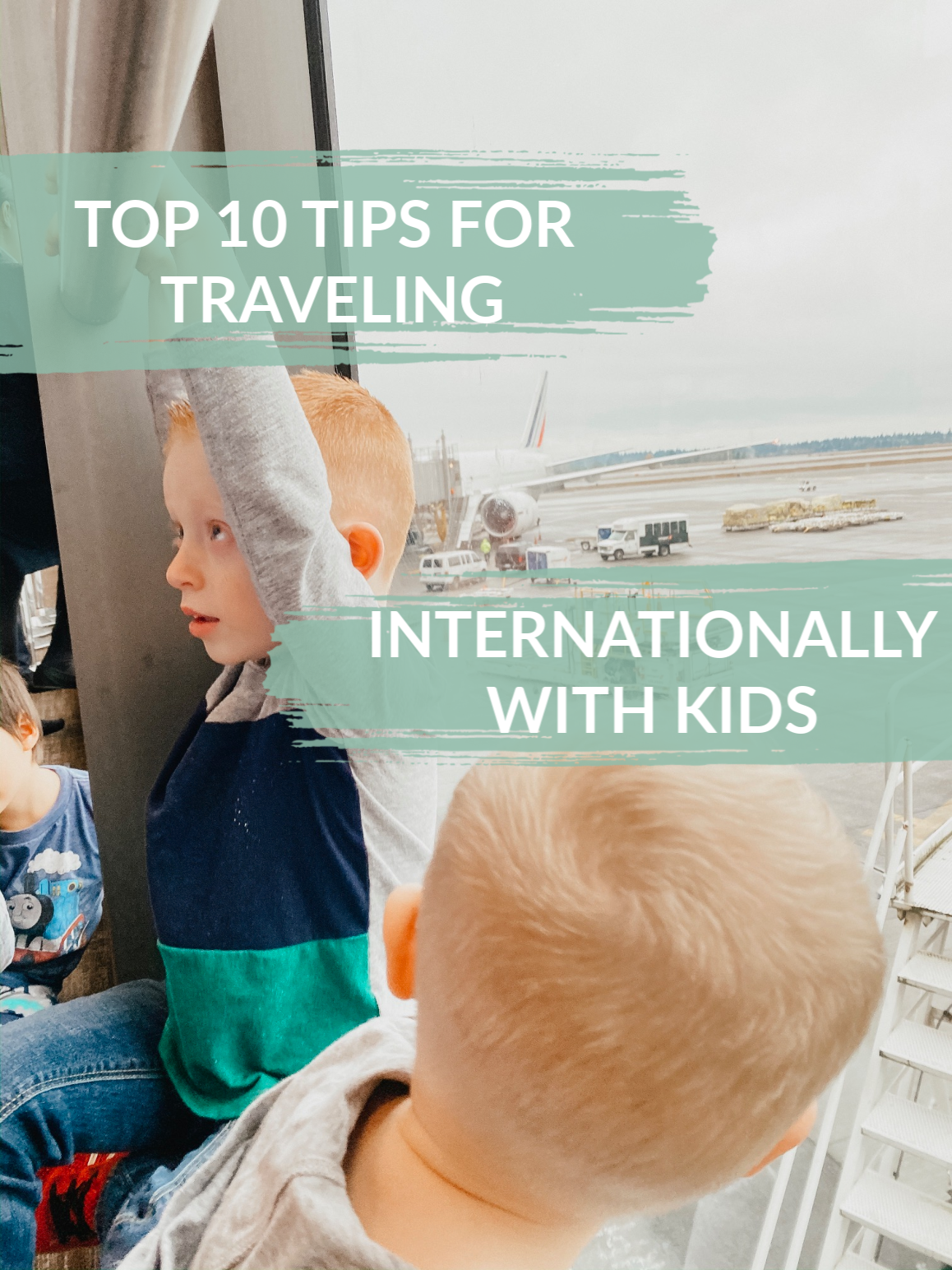 We’ve had a lot of questions lately about traveling internationally with children and, to be honest, we didn’t realize how rare it was until we found ourselves on the receiving end of many a wide-eyed stare. Quite a few strangers on our flights remarked, “wow…traveling with three?!” And, I’ll be honest, there were times that we wondered if we were crazy, as well. Truly though, I wouldn’t have it any other way, and as strange a concept as it might be to travel internationally with three children five and under, I assure you it’s wholly possible. That, my friends, is why we’ve compiled our top 10 tips for international travel with kids.

From age-specific questions (because, yes, many questions had to do with how Mieke handled things) to time changes, and more, I’m sharing what worked for us this time, as well as what’s worked for us in the past.

Most international airlines have some sort of bassinet option for babies ages 18 months and under. When we flew to South Africa aboard British Airways last time, they had a sort of bouncer-type thing that attached to the bulkhead. Spoiler alert: Porter hated it. This time, Air France had a flat bassinet that attached to the bulkhead. Since Mieke’s a belly sleeper, it worked out fantastic, and we were able to use it on both long hauls, making it possible for her to sleep for long stretches at a time.

Pro-Tip: This website offers amazing insight in regards to airline bassinet options. I took the time to research that and coupled it with the best flight prices we could find. When you put in your information to fly, be sure to put “infant bassinet” as your special request, but note that if you’re buying a separate seat for a car seat (we didn’t), they won’t allow you the bassinet option. It’s only available for lap infants. 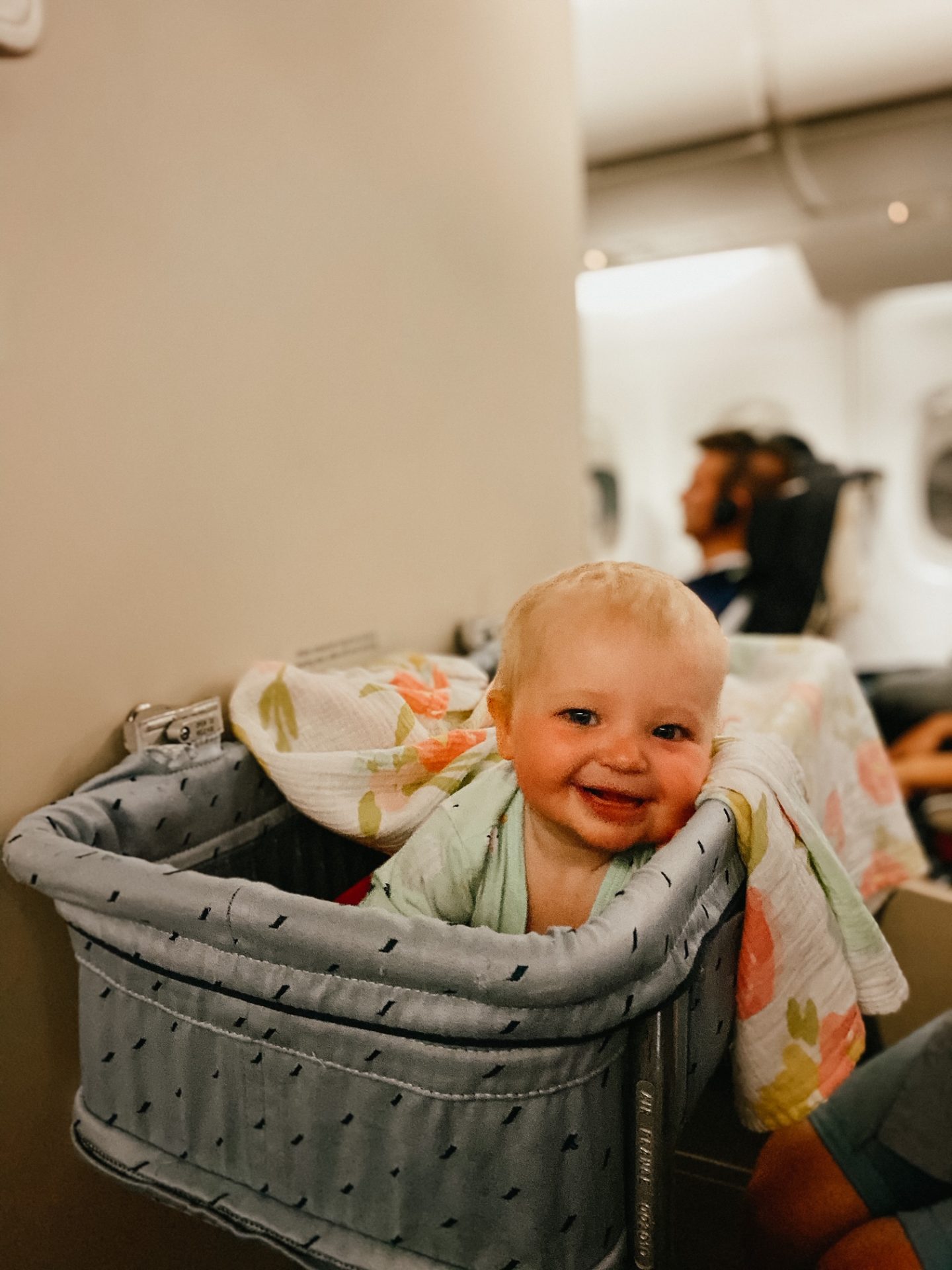 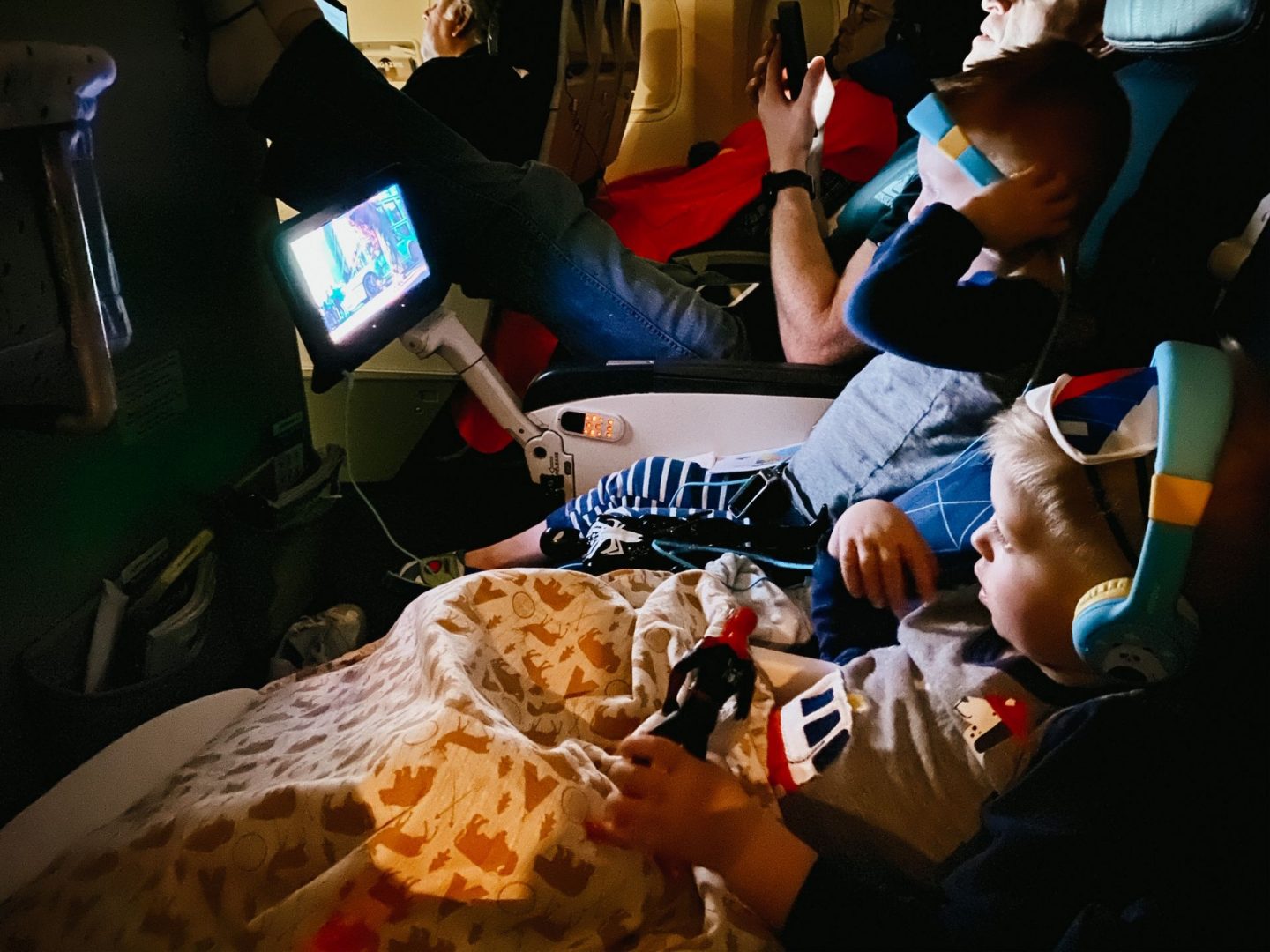 You may be surprised to know that this didn’t solely apply to Mieke. When we purchased our flights, I looked for a flight that would be primarily overnight to maintain a sort of schedule. So, our flight schedule went somewhat like this:

This meant that our kids slept almost the entire first flight because, in theory, that was their normal sleep schedule. While in Paris, we napped, played, and got our energy out, then did a late bedtime for the second flight which, again, they slept most of.

As you can see by our flight schedule above, we had about 12 hours in Paris between our flights. We knew that we’d all be tired and in between time zones despite sleeping on the plane, so I decided to book a pod hotel. While not all airports offer these exactly like this, Charles de Gaulle has an in-terminal hotel called YotelAir for international flights. We booked it for nine hours. We got to sleep in a real bed, as our room had both a queen size bed and bunk beds, watch TV, shower, and enjoy a semblance of privacy. You pay by the hour, and we only paid about $150 for the whole thing. If your connection doesn’t offer a pod hotel, consider a premium lounge where you can stretch out, eat, and shower.

Give Your Kids Some Autonomy

Traveling internationally is hard on everyone. I’m not going to sugarcoat it. It’s a lot of fun, but travel is exhausting, and inevitably there will be meltdowns. Giving them stuff to do on their own and by themselves will help them enjoy the process more. For us, that meant letting them use their tablets on the plane (we have a Kindle Fire for each of them), as well as allowing them to ride or pull their JetKids Bed Boxes. You’ve probably seen my post on them before, but this is one of our absolute favorite travel purchases. They can pull or ride on their own little suitcase, and it opens up and extends into a bed on the plane making for more comfortable sleep.

Be Proactive About Jet Lag

Jet lag is usually worse one way than the other and, for us, that’s usually on the return. We didn’t feel it too much when we arrived in South Africa, but coming home wasn’t as much of a cakewalk. Babies and children usually recover 2-3 time zones per day. So, when traveled home, we made sure to have a full weekend to recover before jumping back in. That being said, the best way to combat jet lag is to keep with an eat/sleep/wake routine. For us, that means a real dark/light system. We bought this BabyJoy pack ‘n play for Mieke because it was affordable and super easy to break down and set up. We also used a tent system to keep it dark at night and light during the day. This helps children’s bodies adjust.

Let’s be honest. Nobody wants to bring 190283908 carry-on bags with them. And here’s the thing – you don’t have to. But you do need to pack smart. We brought one small rolling suitcase, a diaper bag, and the boys JetKids bed boxes on board. Our suitcase had three changes of clothes for the boys, as well as a change for both Ryan and myself. It also had basic cosmetics for freshening up at the pod hotel. I also had three changes for Mieke. You want to be prepared with one more change of clothes than you think you’ll actually need because, in all likelihood, something will go wrong. Also, even though both boys are potty-trained, we brought nighttime pull-ups for them for A) peace of mind and B) just in case. 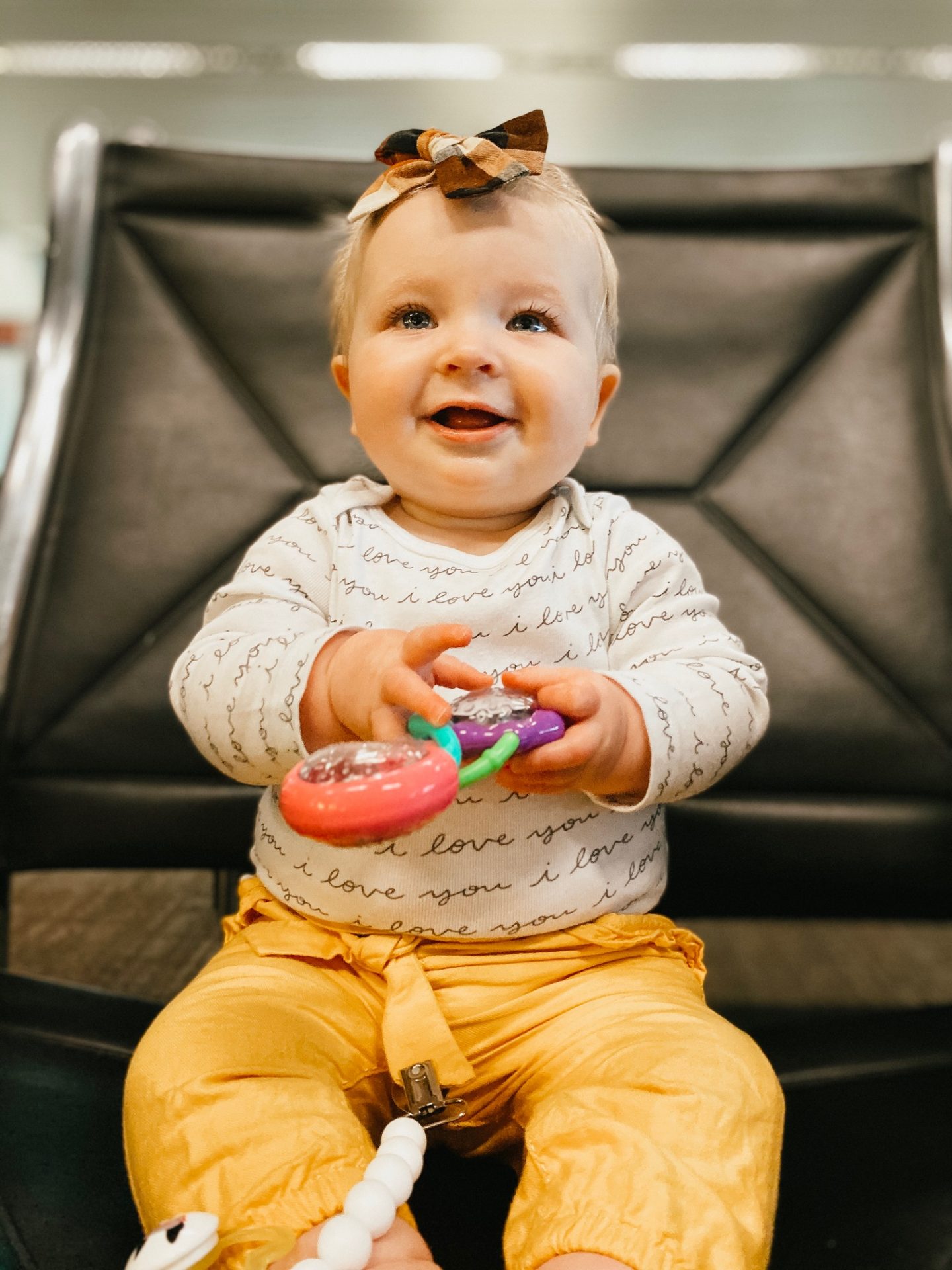 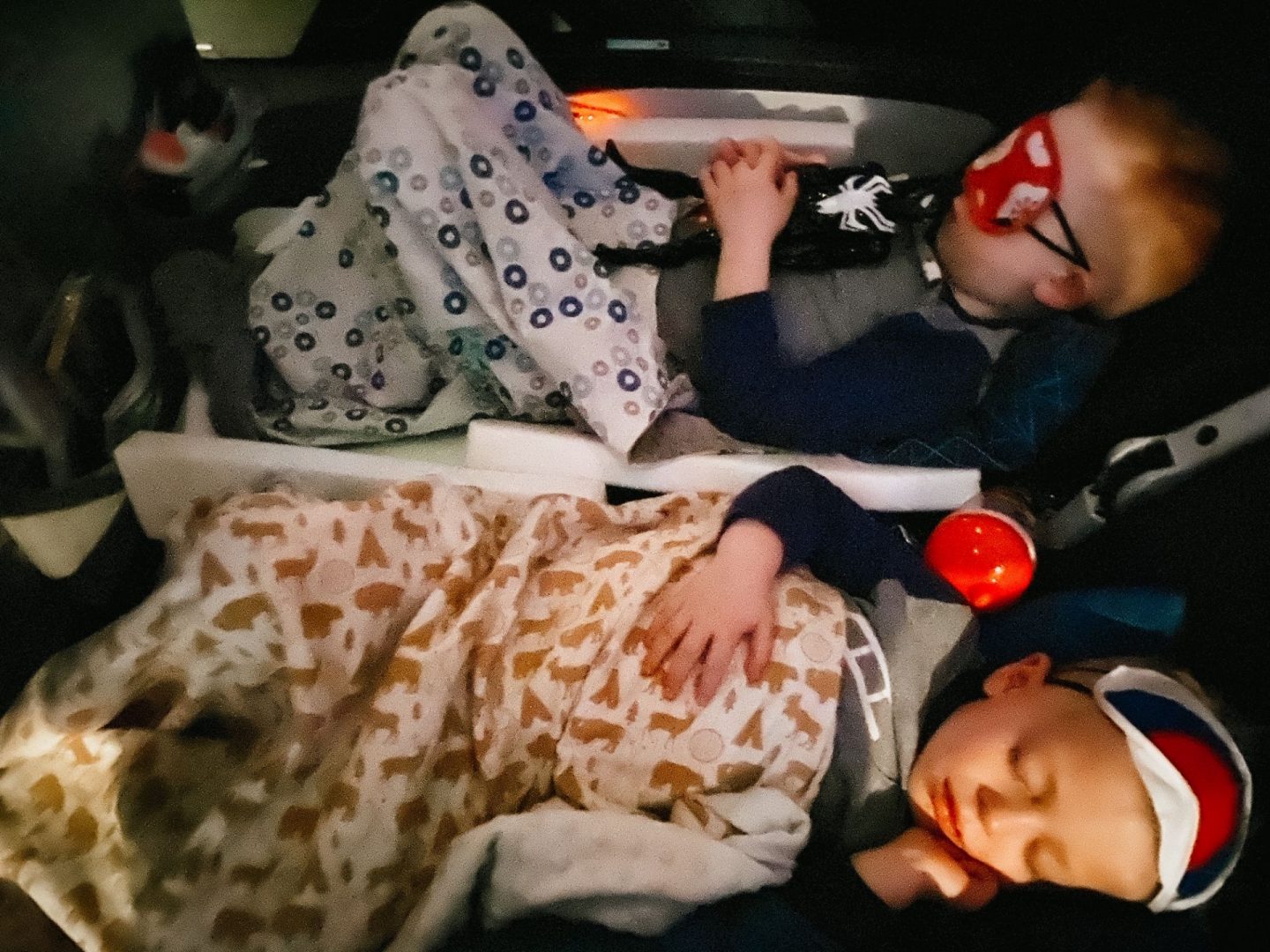 Military Family? This One’s for You!

If you’re flying as a family, regardless of whether you’ve purchased TSA PreCheck or not, you can utilize your soldier’s DOD ID number from their CAC card to obtain PreCheck. Simply type their 10-digit DOD ID number in the “known traveler number” section, and your entire family – so long as the servicemember is first on your travel reservation – will receive TSA PreCheck.

You know that nifty little number on your boarding pass that says something like “zone 5”? Ignore it. If you have a young child (usually 3 or under) or infant, you’re entitled to extra time boarding the plane prior to elite status holders. Some airlines won’t specifically call you up, however. Do your due diligence. I made a point of going up to the gate agent each time and, each time, they’d immediately move us to the appropriate area to take advantage of pre-boarding time.

Be Prepared for Altitude Earaches

For the boys, we’re always prepared with suckers or chewy candy, though I’ll admit that neither of our boys have ever had a real issue with takeoff and landing. For Mieke, we made sure she was drinking during both takeoff and landing, as the sucking motion will naturally help her ears to pop and regulate on their own. If babies are still nursing, this is the perfect time to nurse, as they’ll have that same benefit. If the issue doesn’t let up, we’re always prepared with a small bottle of infant Tylenol – just in case. (PSA – it fits in your plane-approved liquids.)

Stick with the Local Schedule

This goes somewhat hand-in-hand with jet lag, but don’t be fooled. One of the worst things you can do is to immediately sleep when arriving at your new destination. Instead, do your best to power through with the local schedule. For example, we arrived at 10:30 AM. At Mieke’s normal afternoon nap time, 1:30 PM, we put her down. Though she could have easily slept through, we woke her after two hours. Stick with the local schedule. Go to sleep at your normal time. Fight the fatigue (within reason, obviously), and you will all adjust much faster.

So, there you have it – our top 10 tips for international travel with kids. I can attest to the fact that it’s hard, and it takes a lot of preparation, but it’s completely worth it. Traveling with our children is incredibly important to us, and forging these memories together is priceless. It’s absolutely worth every airplane blowout and tantrum!