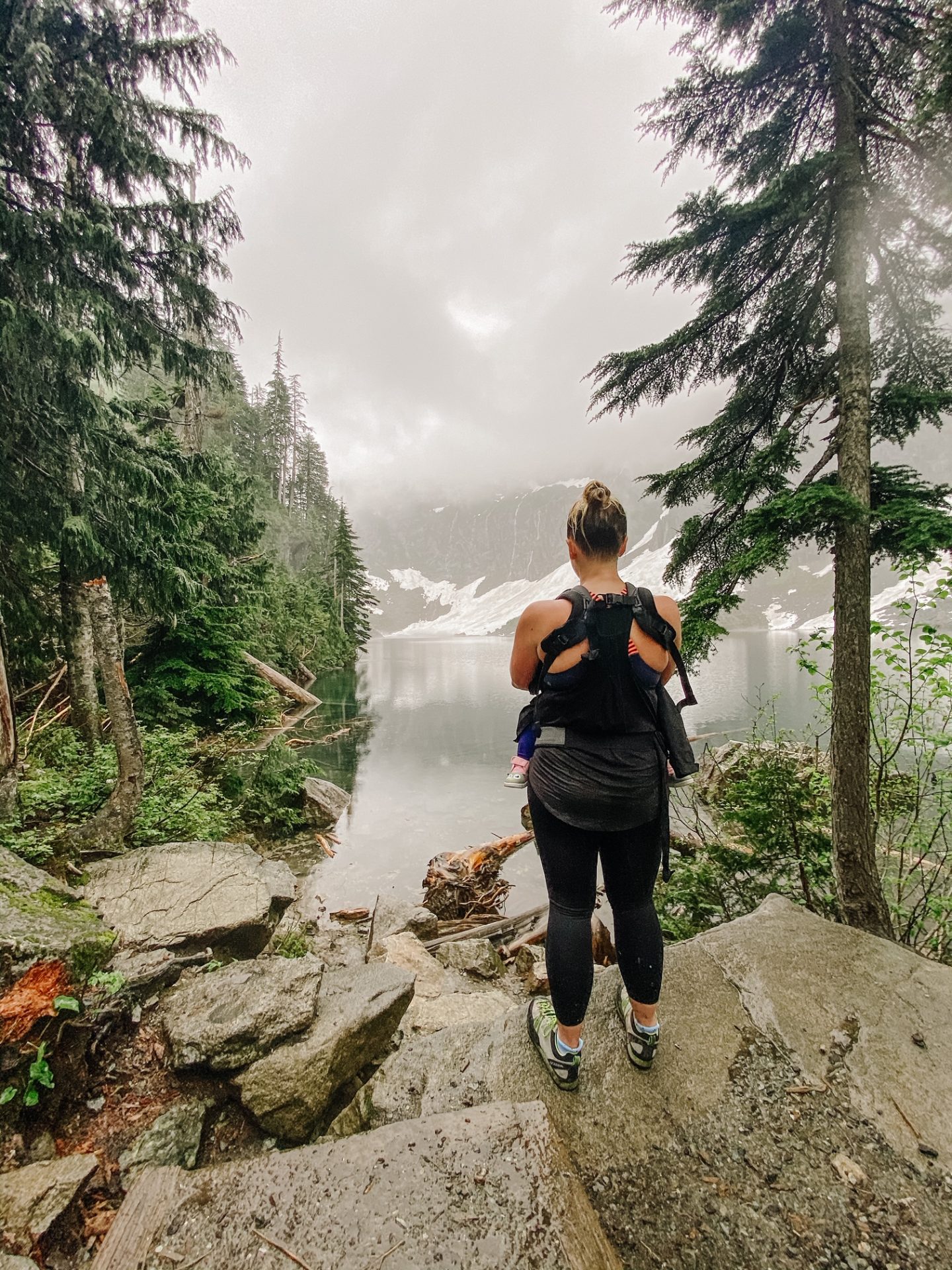 This past weekend was one for the record books, folks. When my friend Chelsea and I decided to hike to Lake Serene, we knew we’d be pushing it with our combined five children in tow. We didn’t know, however, that it would be one of the most challenging, epic, beautiful, frustrating, painful, and mentally exhausting experiences of our lives; and that’s saying something as military spouses. We decided Saturday would be best spent hiking Lake Serene and Bridal Veil Falls in Snohomish County, so we packed up bright and early, drove two hours to the trailhead, and embarked on what became a hike I won’t soon forget. I shared a few snippets and snapshots along the way on my instagram, but it didn’t really capture the essence of the trip.

From start to finish, hiking Lake Serene and Bridal Veil Falls in 8.2 miles roundtrip. It’s 2,000+ feet of elevation gain. It’s slippery, muddy, full of switchbacks and steep steps that eventually lead you to one of the most beautiful lakes you’ll likely ever see. Hiking up is well worth the beautiful reward of viewing Lake Serene, but I’ll fully admit that this hike isn’t for the faint of heart. But, let me back up.

On Friday, Chelsea and I knew we needed to invest in some new hiking shoes. We’d done a fair bit of reading about hiking Lake Serene, and we knew that hiking shoes would be well worth the money. And, having done a lot of hikes lately, like Moulton Falls and Melmont Ghost Town Trail, I knew that it was time to get some. So, I bought some great new hiking shoes from Scarpa, and I thanked my lucky stars we did so throughout that entire hike. I honestly should have gotten some for the boys ahead of time, but I couldn’t find any locally that fit them, and it took me a while (read: too long) to find some on Amazon, so they didn’t make it on time. They survived, but it would have made their lives much easier. But, I digress. 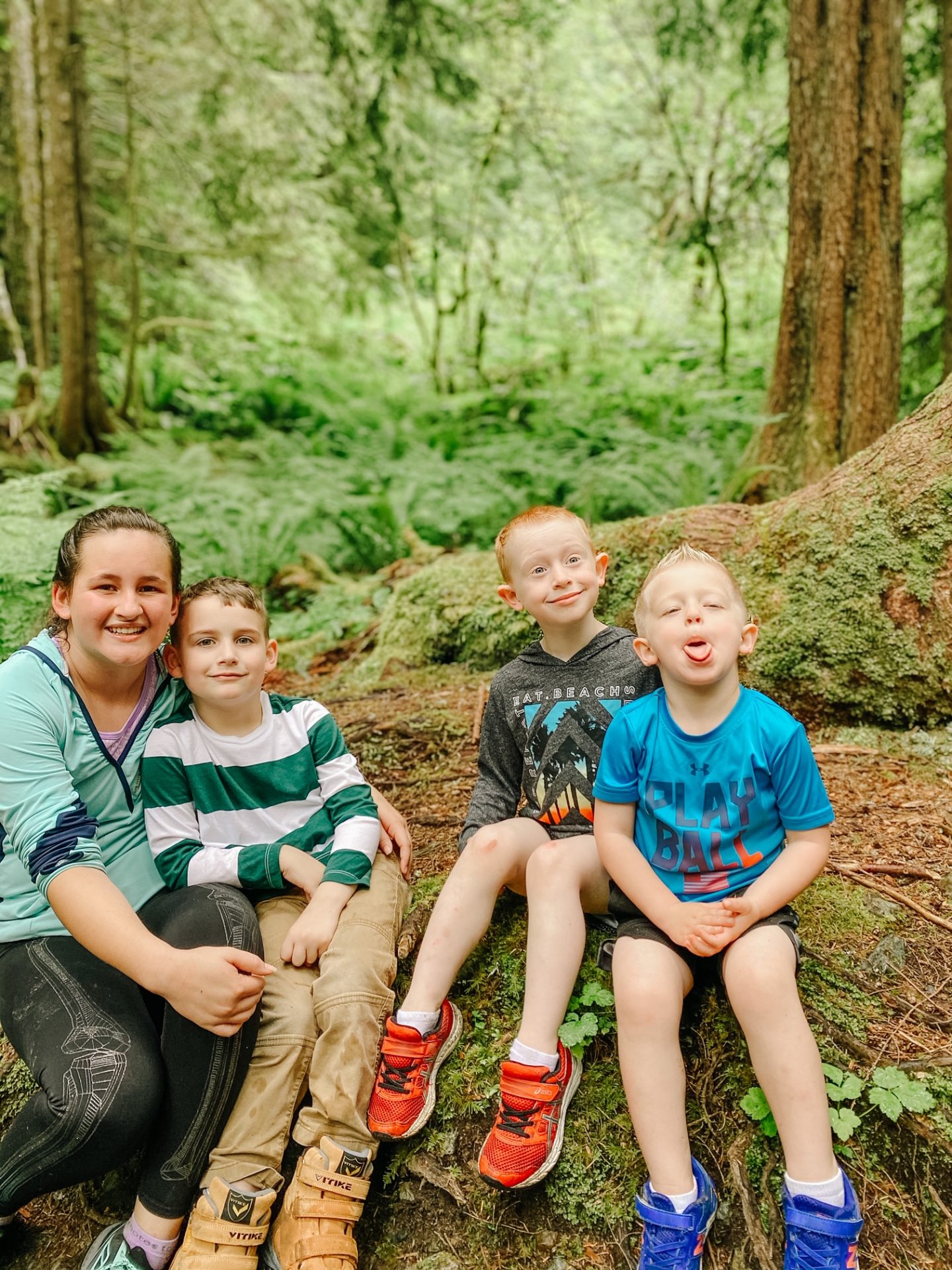 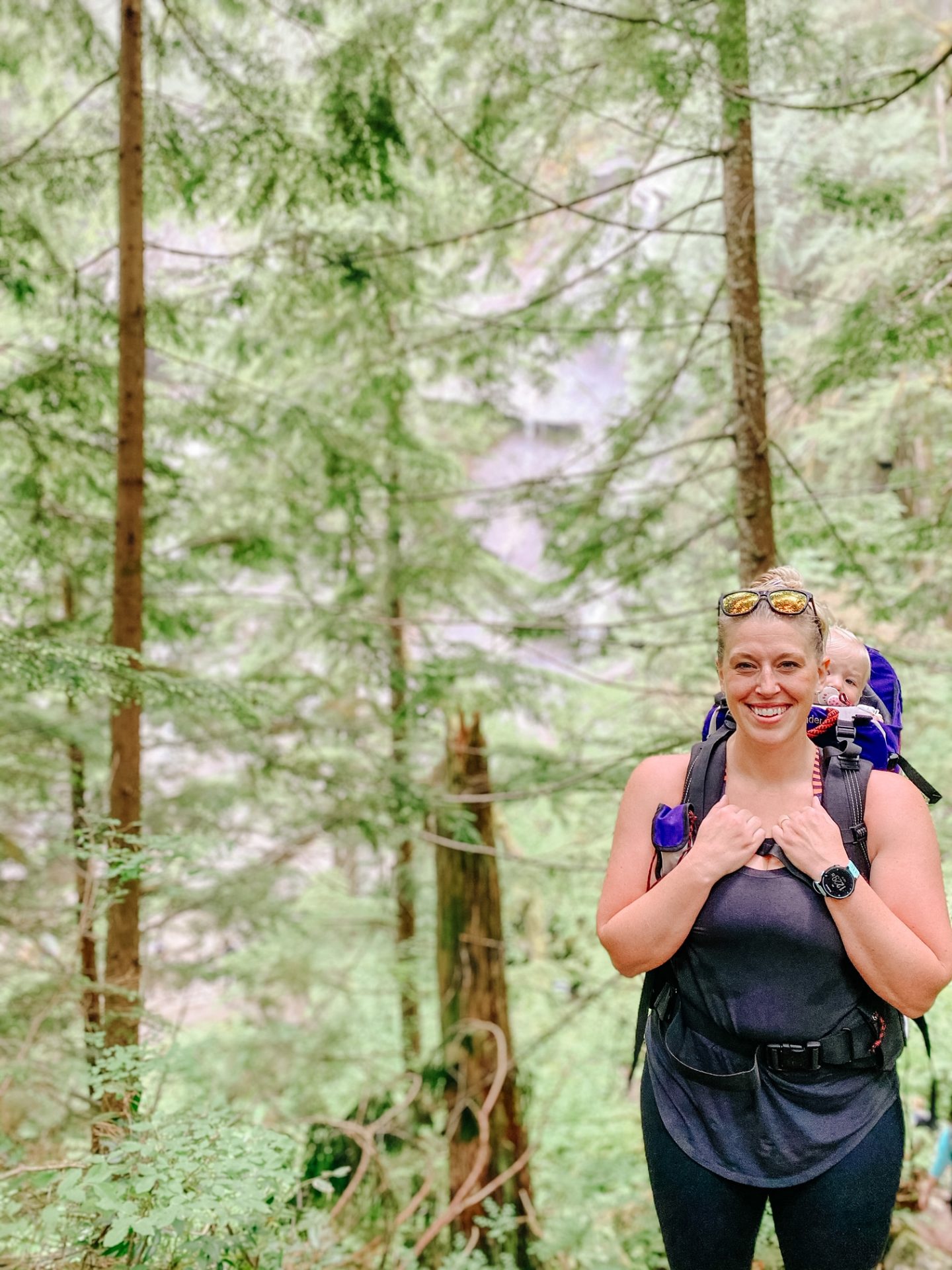 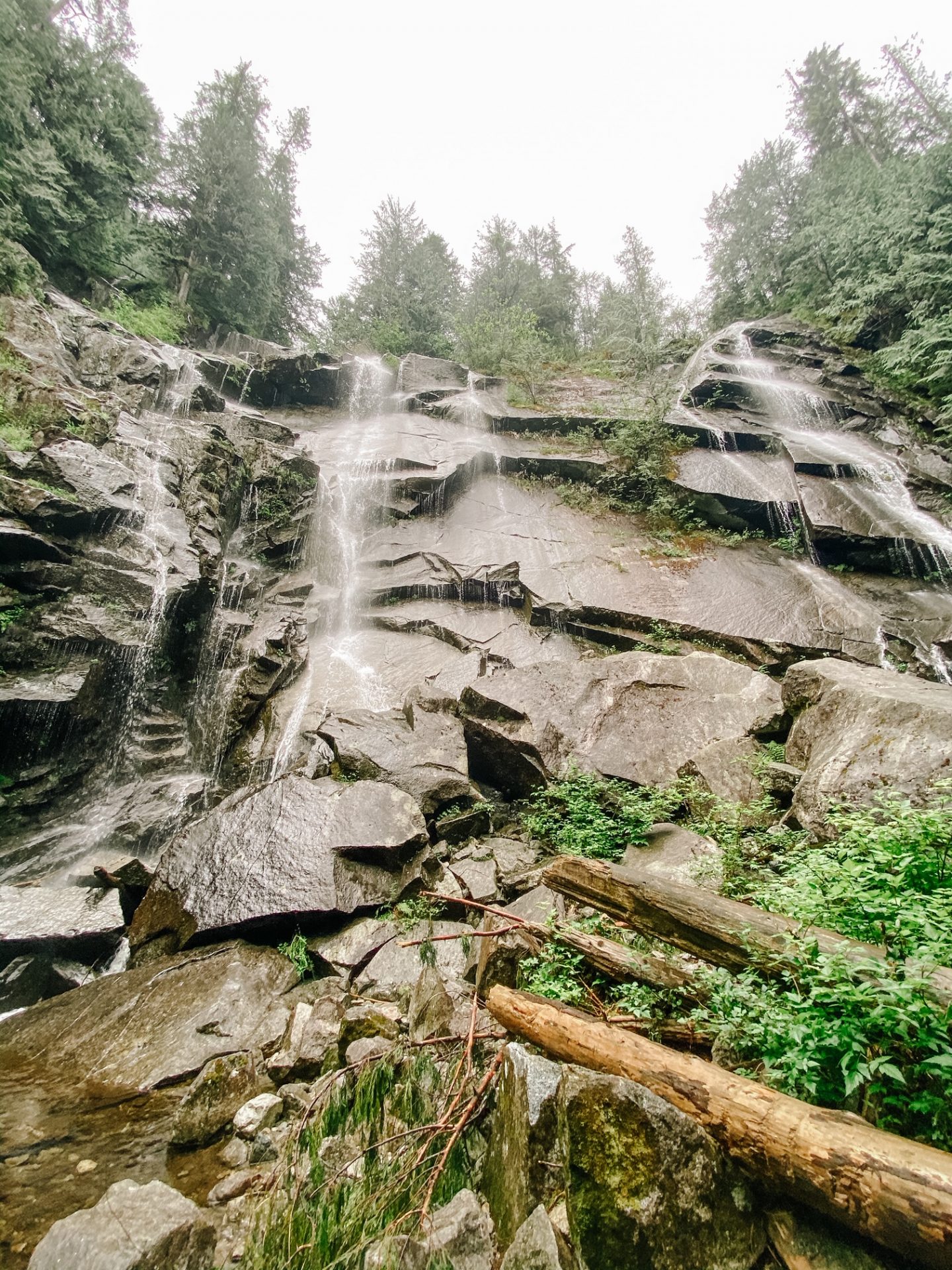 Lake Serene is about two hours from JBLM, and it’s a pretty easy drive. The kids did great playing on their tablets, Mieke took a little snooze, and Ryan convinced me that leaving Danny home was a good idea (which I’m super grateful about) because neither he nor Chelsea’s husband could come with us. When we arrived, the facilities were still closed due to COVID precautions, but the lot was busy, and we realized that plenty people were as crazy as us, ready to embark out into the unknown.

The start of the trail is deceptively easy. The first mile is a well-worn gravel trail that leads over little streams, cute little riverbeds, and petite waterfalls that cascade along the trail. At just under two miles, you reach the base of Bridal Veil Falls. You can hear it rushing for about 10 minutes prior, but when you finally reach it, it takes your breath away. It’s stunning, and we took some time to admire the view up as we crossed the bridge below it, as well as by the pools to the far side of it. That’s when we saw our first trail marker. The trail forks, offering you two choices. One, you can climb up to the top of Bridal Veil Falls for about 1.7 miles, or you can continue straight on towards Lake Serene for another 2.4 miles. We were in it, so we kept straight.

Now, mind you, it was raining the whole time. It started out a gentle mist, and we were sweating, so it was actually a welcome feeling. As we started to climb though, we could no longer tell where the sweat started and where the rain ended. In a word, we were drenched. At this point, the trail isn’t easy anymore. It’s a series of steadily-climbing switchbacks, alternating slippery rocks and steep-pitched steps filled with water and mud. There were a few times that we wondered if we should turn around, and we got a lot of comments and looks about how inspiring we were (read: crazy) doing this with kids strapped to us because I was wearing Mieke, and Chelsea started wearing Porter after a while. We kept climbing though, and after more than four hours, we made it to the top. 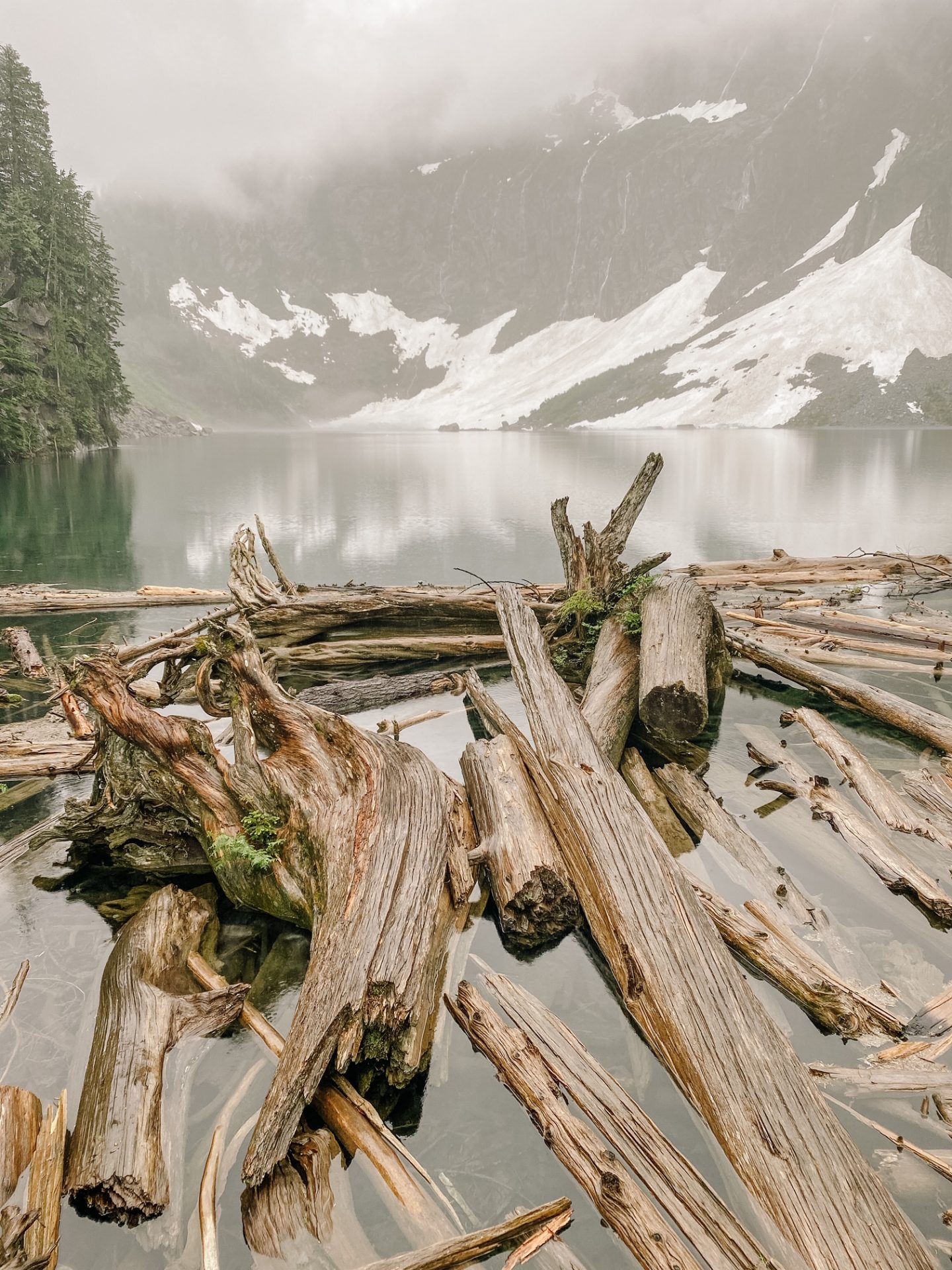 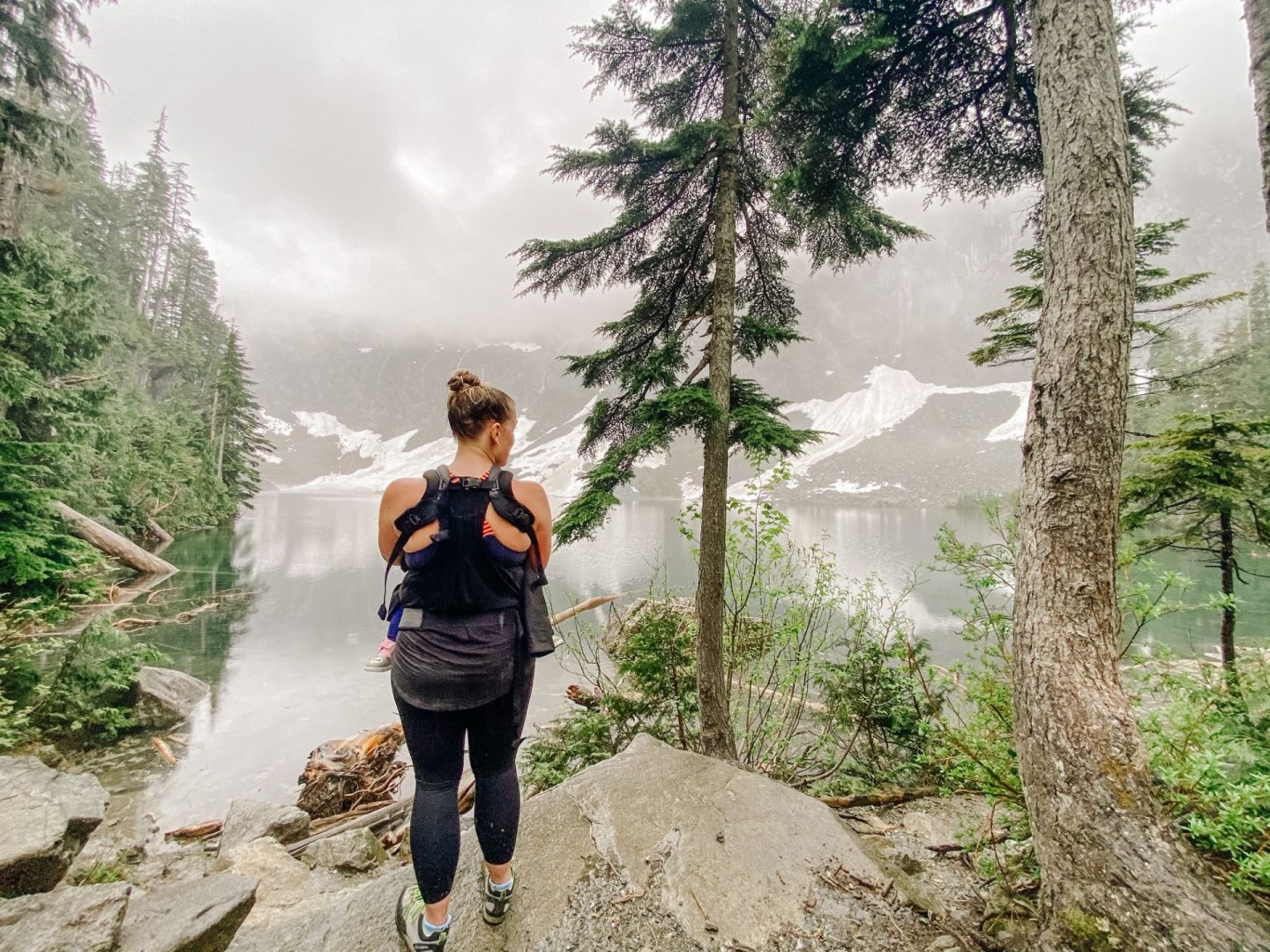 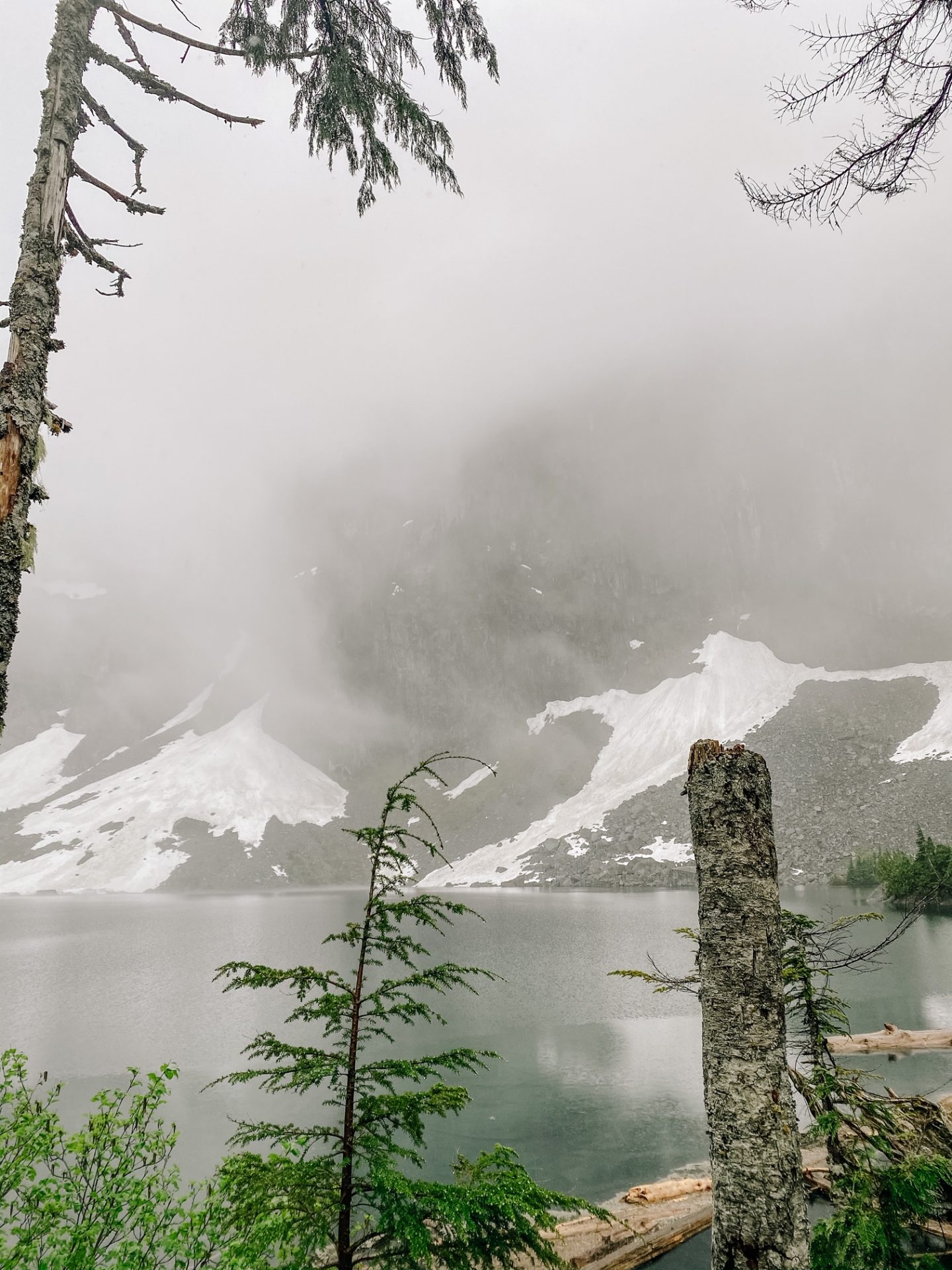 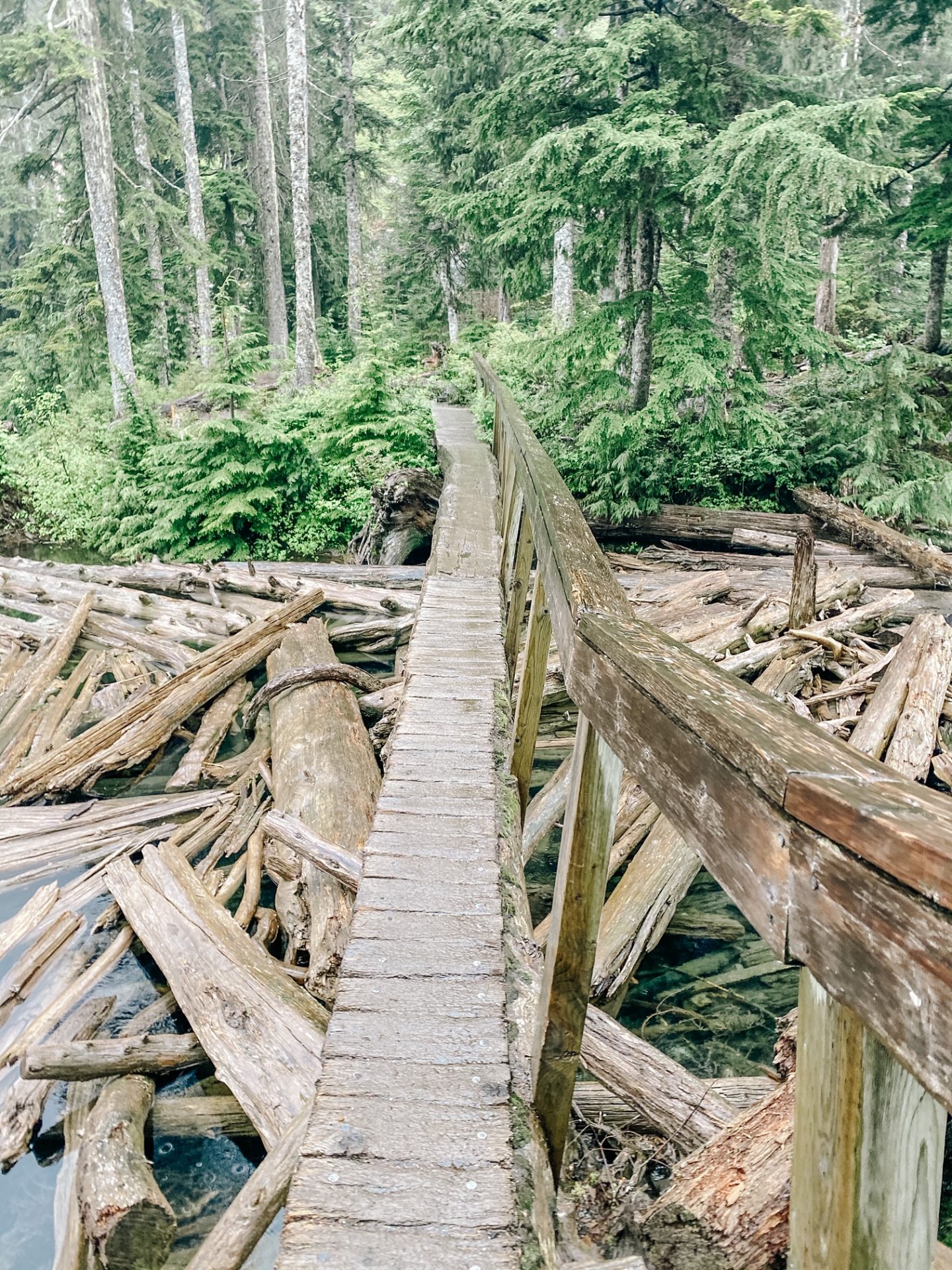 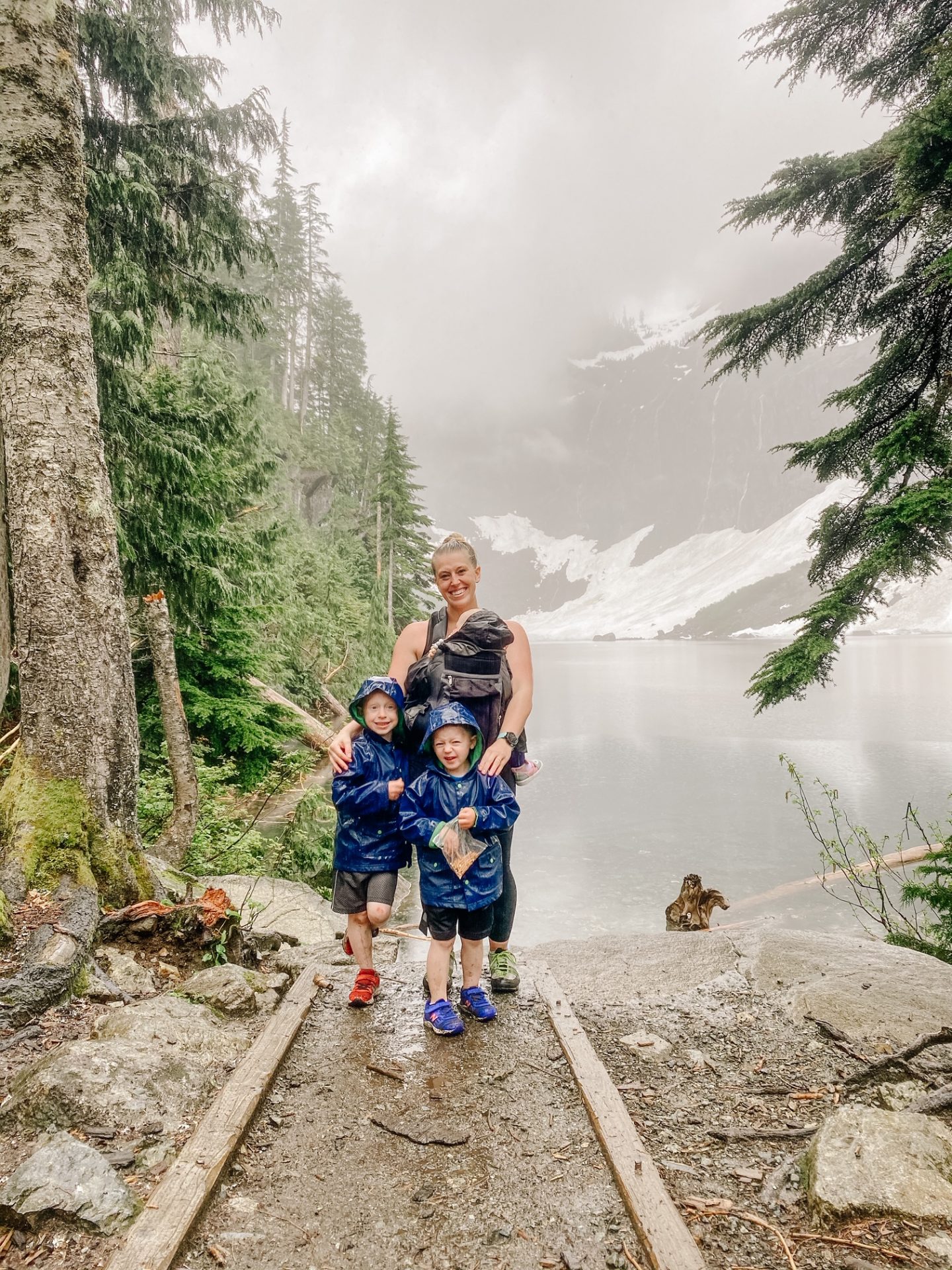 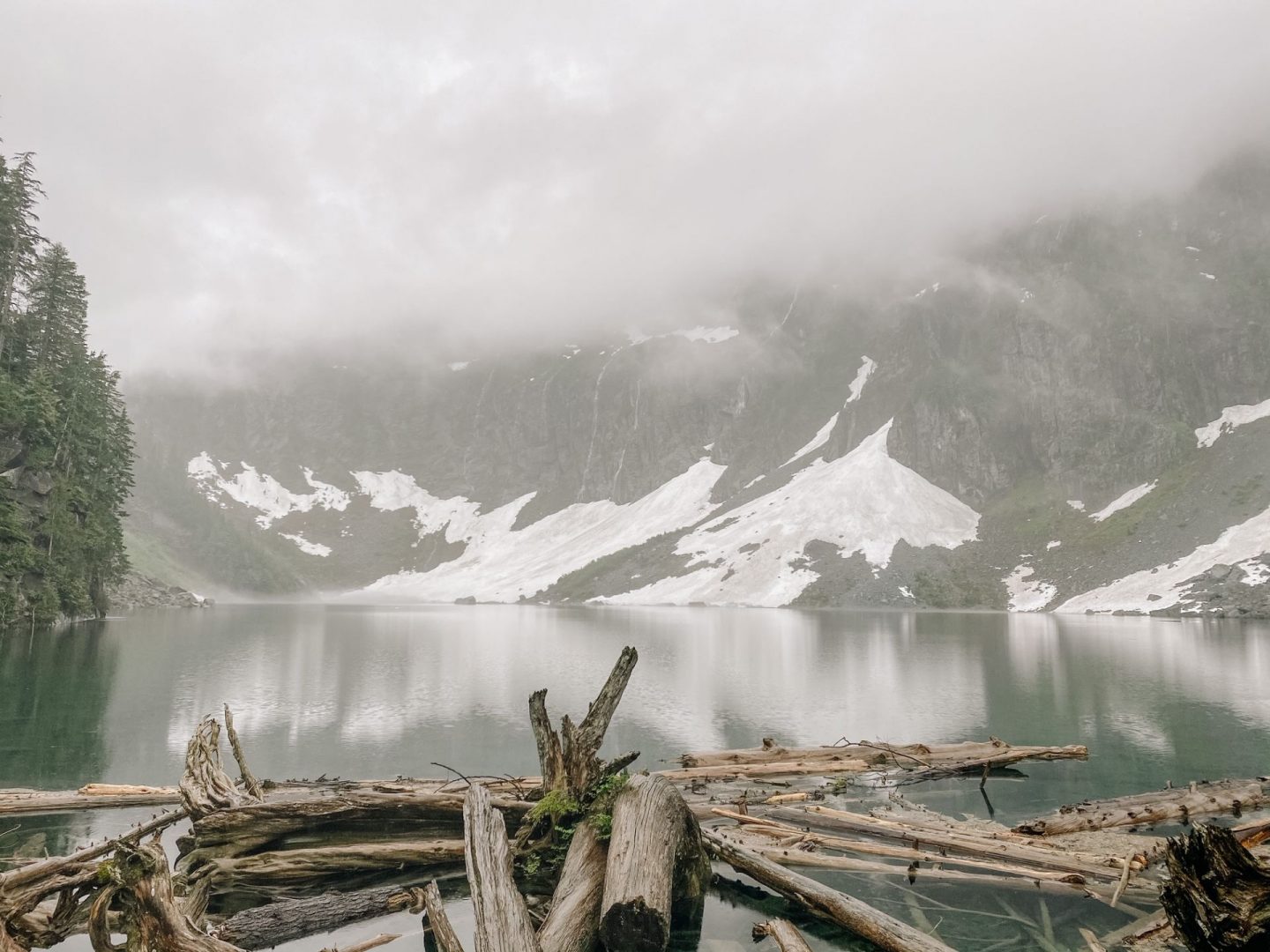 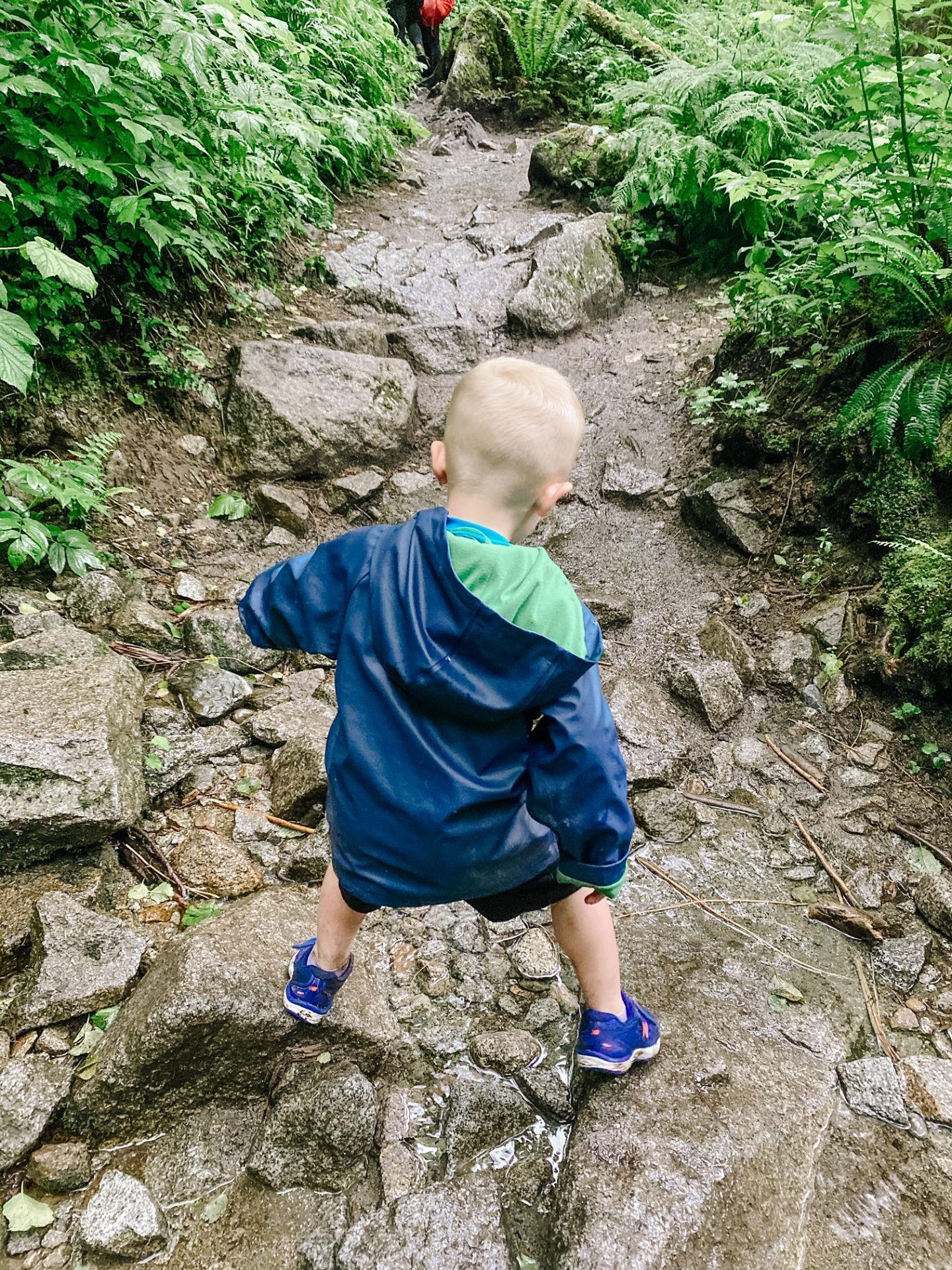 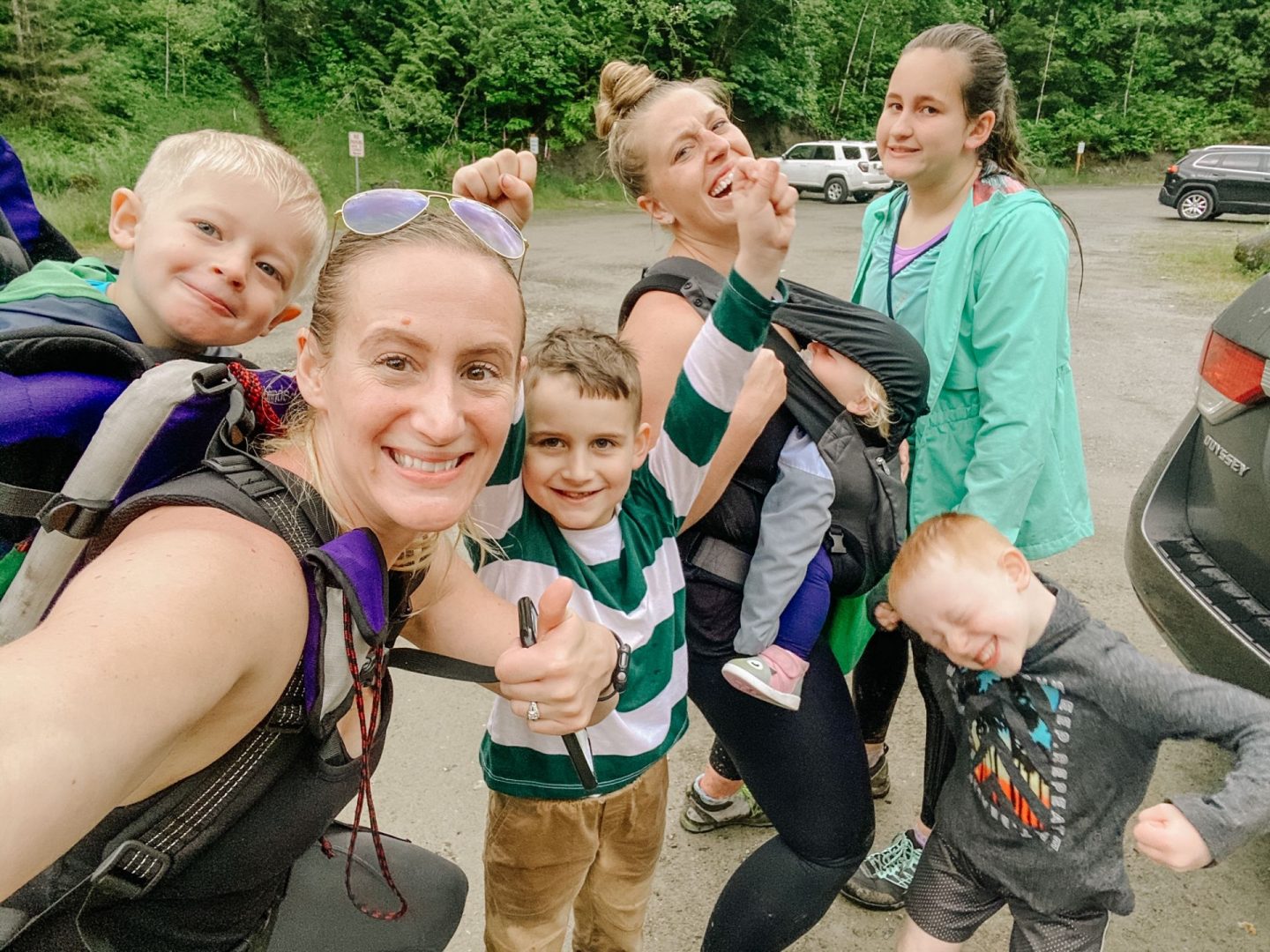 Lake Serene is breathtaking. Even with a heavy mist shrouding Mount Index and the falls, we could see the bright green forest contrast against the stark turquoise of the frigid water. We took some time to stop, take the kids off, eat some food, take some pictures, and collect ourselves. But, let me tell you, we really felt the temperature change at that point. It went from 63 degrees at the bottom to 41 at the top, and since we were soaking wet, we started shivering, and we knew it was time to go back down. Naively, I thought the descent would be easier. It wasn’t. It was almost harder, trying to rein in our desire to run, keep the kids from falling, trying to stop ourselves from slipping in the mud, etc. People encouraged us. Strangels (stranger angels 😀 ) offered us extra water, and we pressed onward, despite some frustration, some second-guessing, and a few tears. We made it. Seven and a half hours later, we made it back to the trailhead.

Guys, Spencer hiked 8.2 miles roundtrip on his own two feet. Porter did a combined 5 miles of his own. Chelsea’s children did the whole thing, too! My kids are veritable billy goats, and while I’m still sore, I’m so glad we conquered this one because it was truly a bucket list item for us. And, besides, anything will seem easy after that, right? The Washington Trails App says this is an intermediate hike, but I disagree, so here’s what you should really know about this hike:

Level of Difficulty: Hard. The WTA app says this is an intermediate hike, but I beg to differ. The switchbacks, alone, make it hard, and I wouldn’t recommend this hike to novices. It also says it’s kid-friendly. I’d say this depends on the kid. My children survived, but it was definitely not “kid-friendly” per se.

Tips: Be prepared for mud, and pack a picnic lunch; wear layers because it gets very chilly at the top, especially if it’s raining.