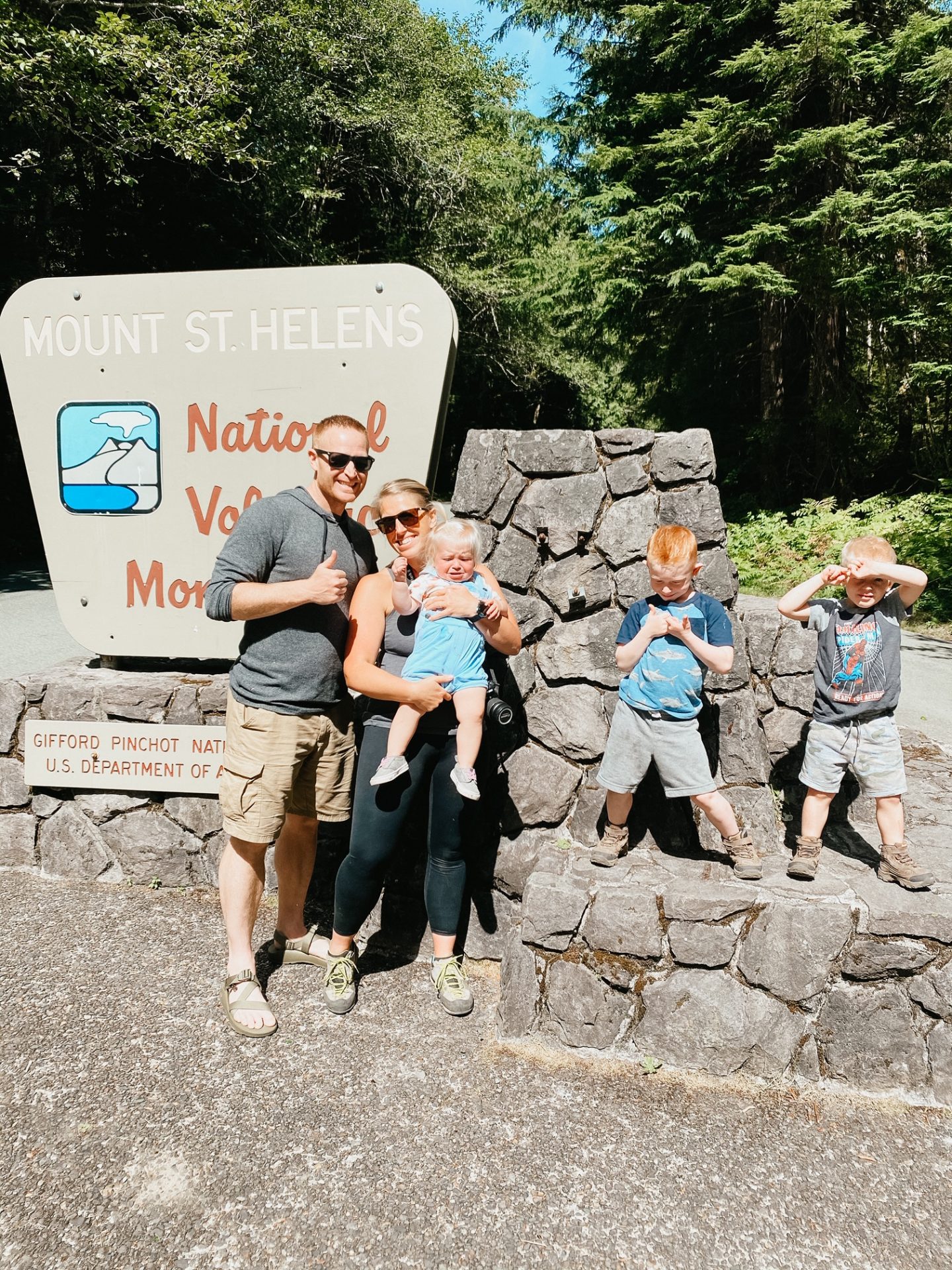 Happy Monday, friends, and cheers to the final day of August! I can hardly believe it, but we’re also officially in our final week of proverbial freedom before Kindergarten starts for Spencer (officially) on September 8th. I’ve picked up his school supplies, met his teacher, got his tablet, and we’re about to embark on a virtual learning journey, but we’re giving it a month to see how he does before we make a real decision as to whether or not we’re going to straight homeschool him. In the meantime, we’re doing our best to soak up the last snippets of summer and exploring as much as possible while we can. So, that’s why when our friends invited us to spend the night in their RV in Cougar, WA this past weekend, we jumped at the chance to spend a day exploring Lava Canyon and the lava tubes with great friends.

Nestled in the Gifford Pinchot National Forest, Lava Canyon and the lava tubes are eerily close to Mount St. Helens, and to access them, you pass the sign welcoming you to the Mount St. Helens National Volcanic Monument area, which was established in 1982 and designated the surrounding areas to research, recreation, and education. This was our first time in the area, and it was absolutely spectacular. Lava Canyon Trail is a pretty popular trail and consists of over five miles of hiking with spectacular views of waterfalls, limestone shelves, river areas, ladders down steep rocks, and more. It also leads to an incredible suspension bridge that crosses the gulch. In true 2020 fashion though, the bridge was closed, so we couldn’t complete the loop. From the initial trailhead to the bridge and back, however, it was about a mile and a half of beautiful trail, and it was well worth the visit. 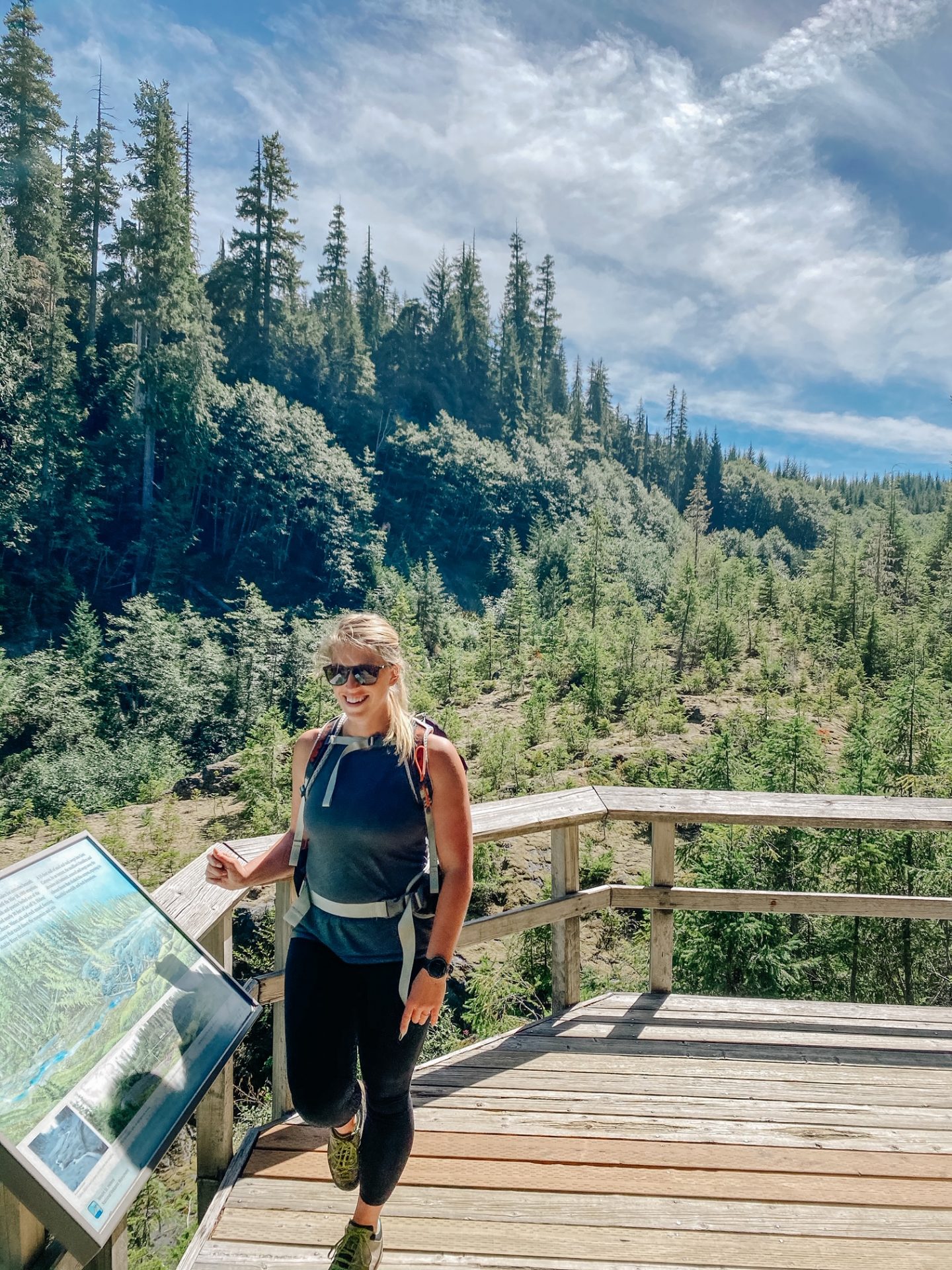 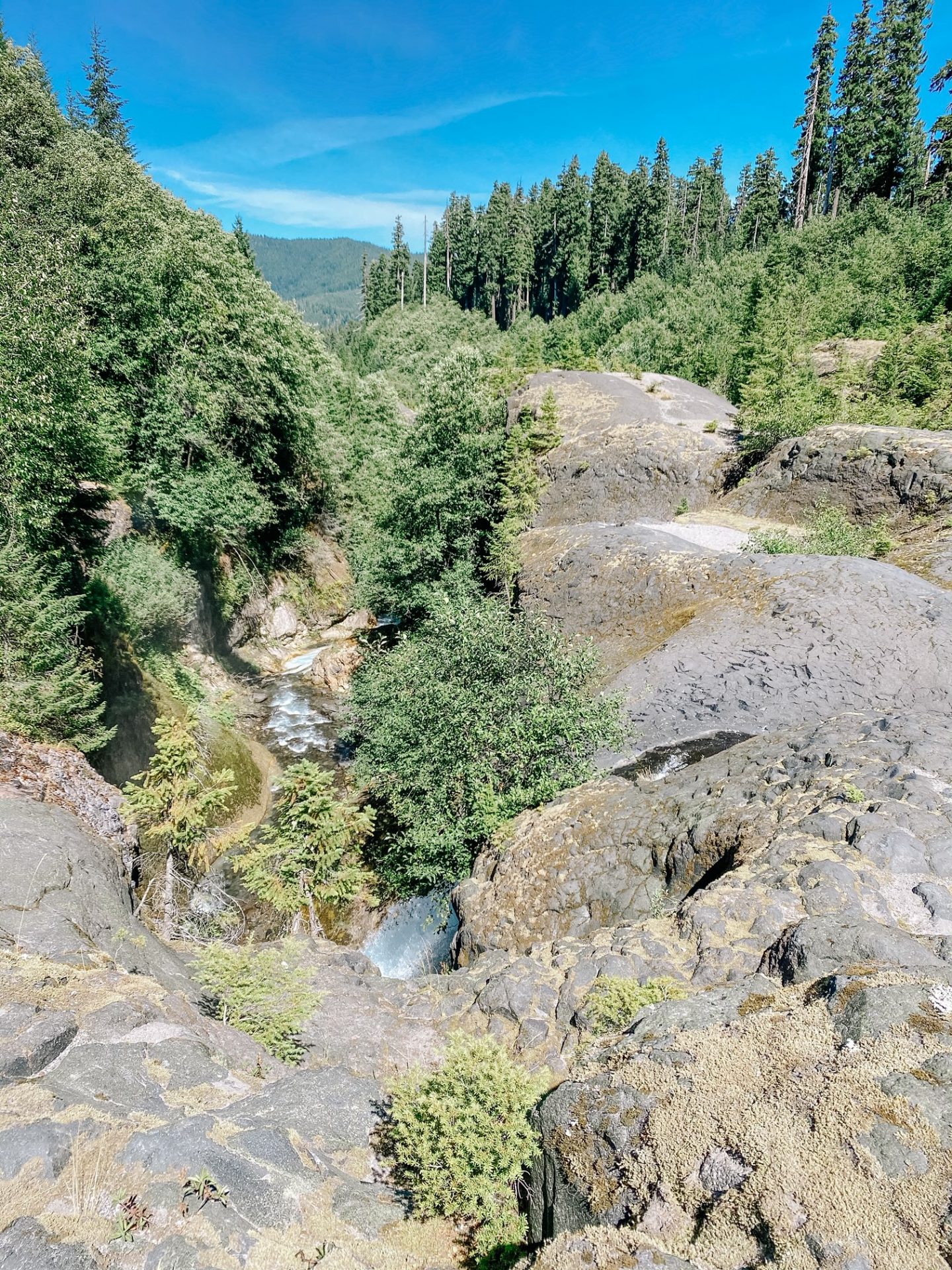 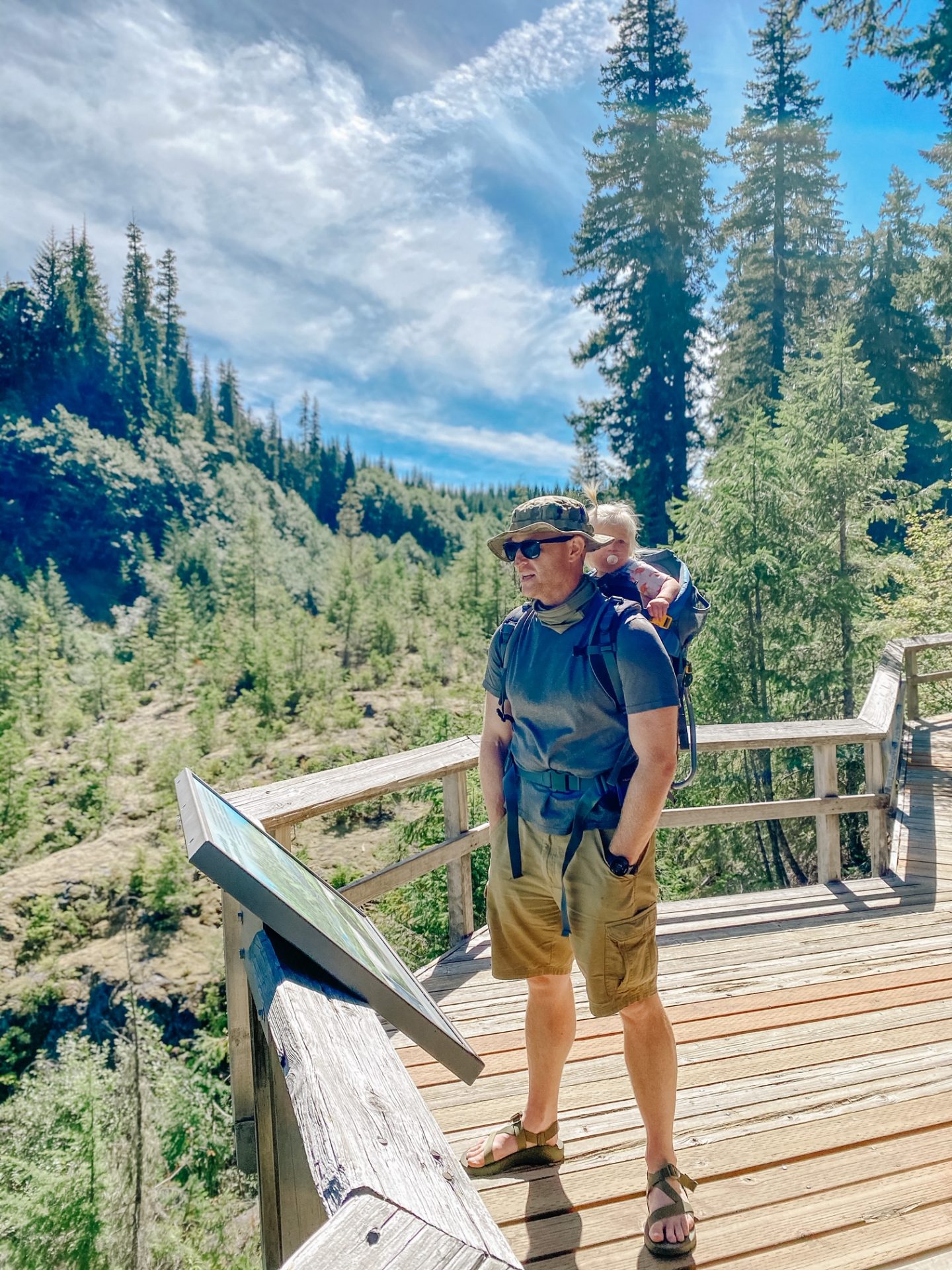 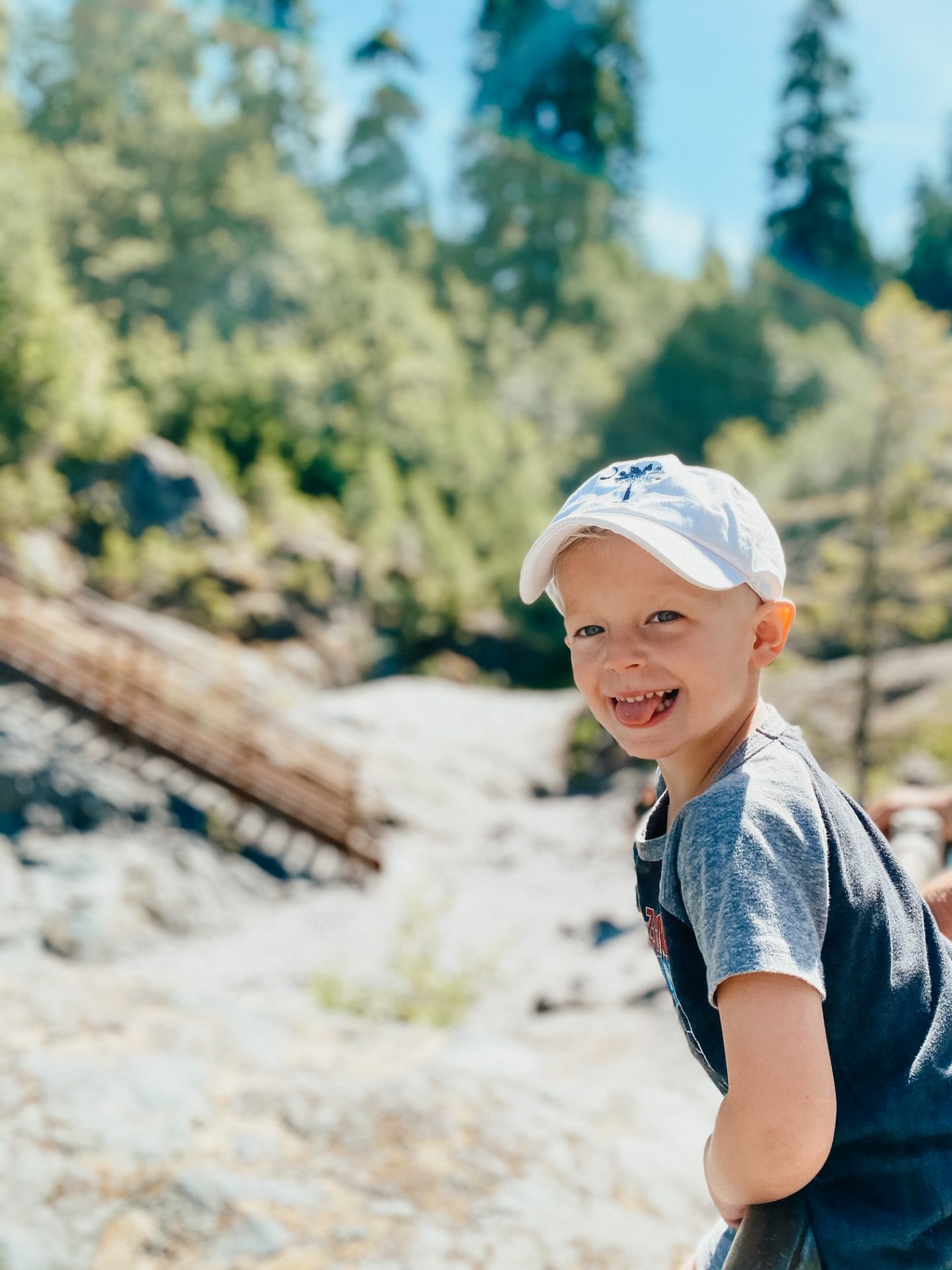 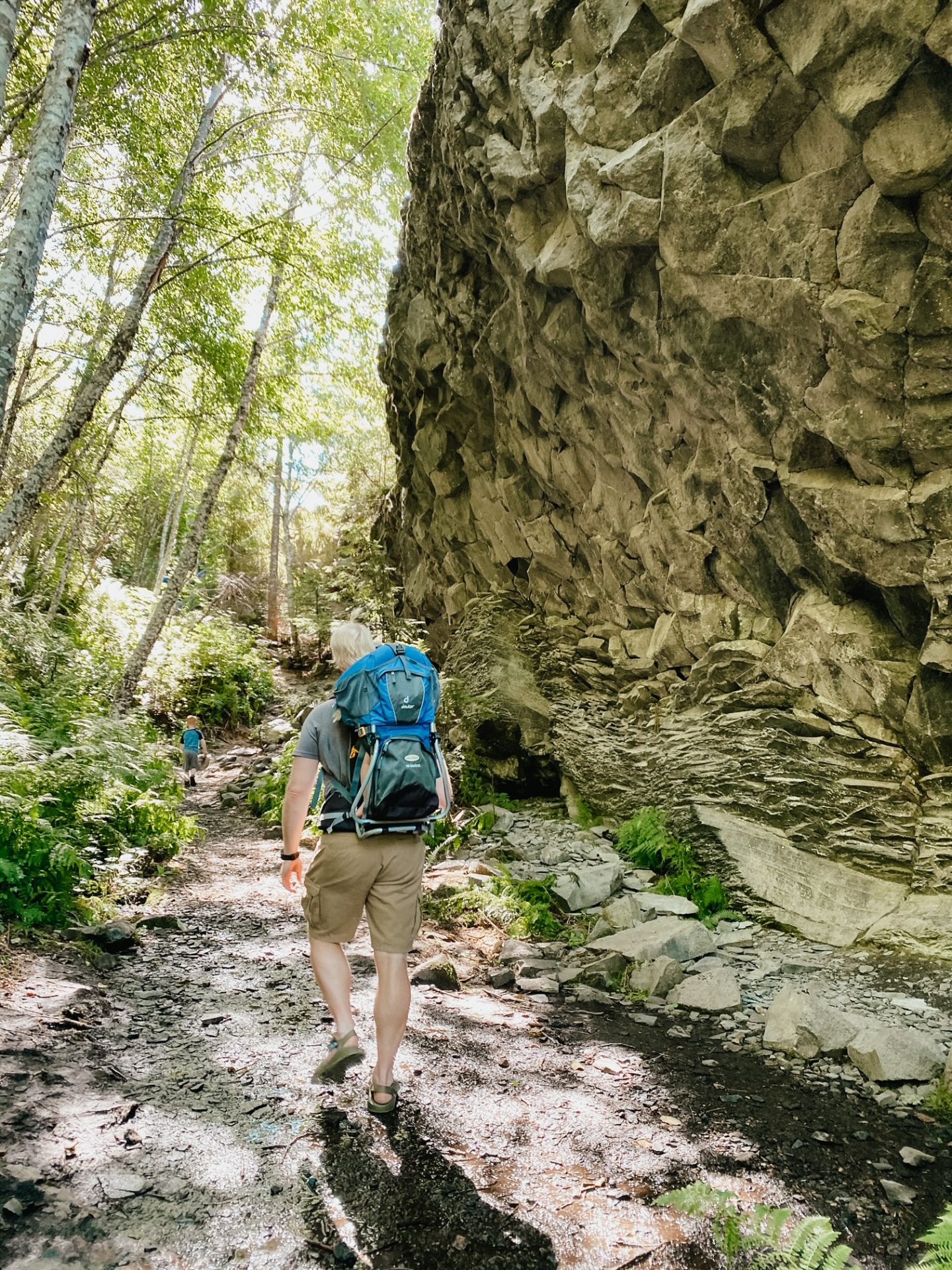 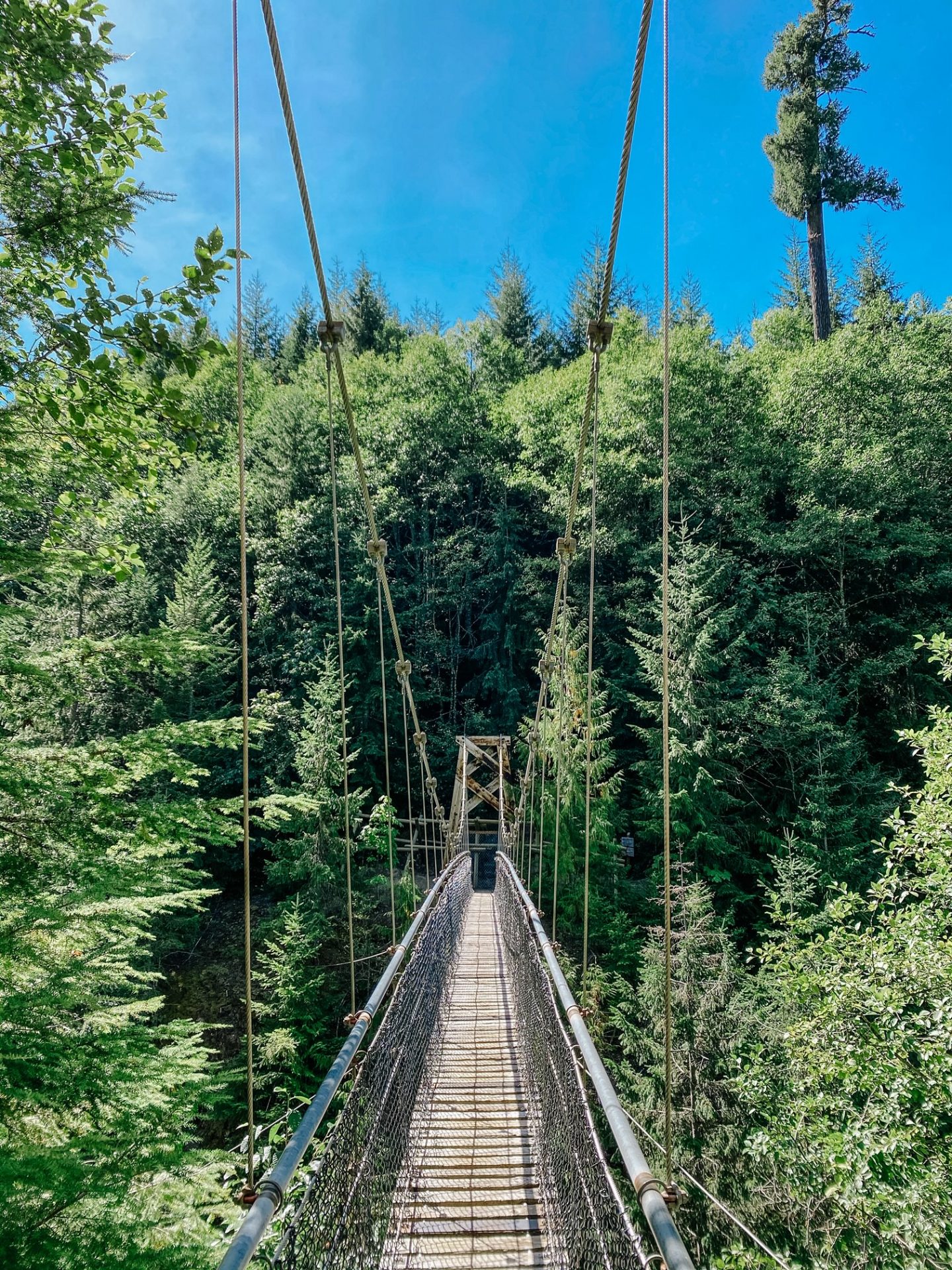 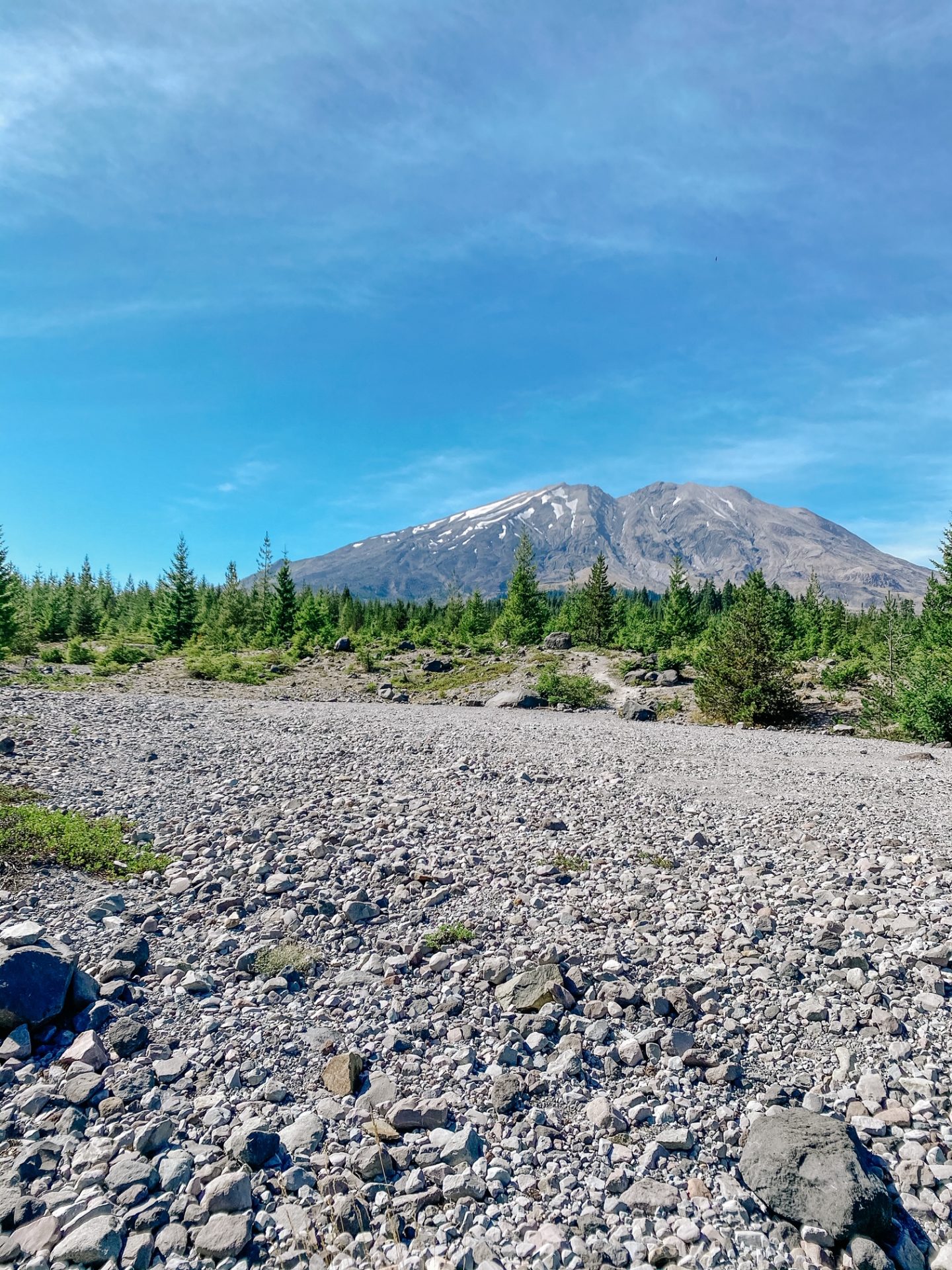 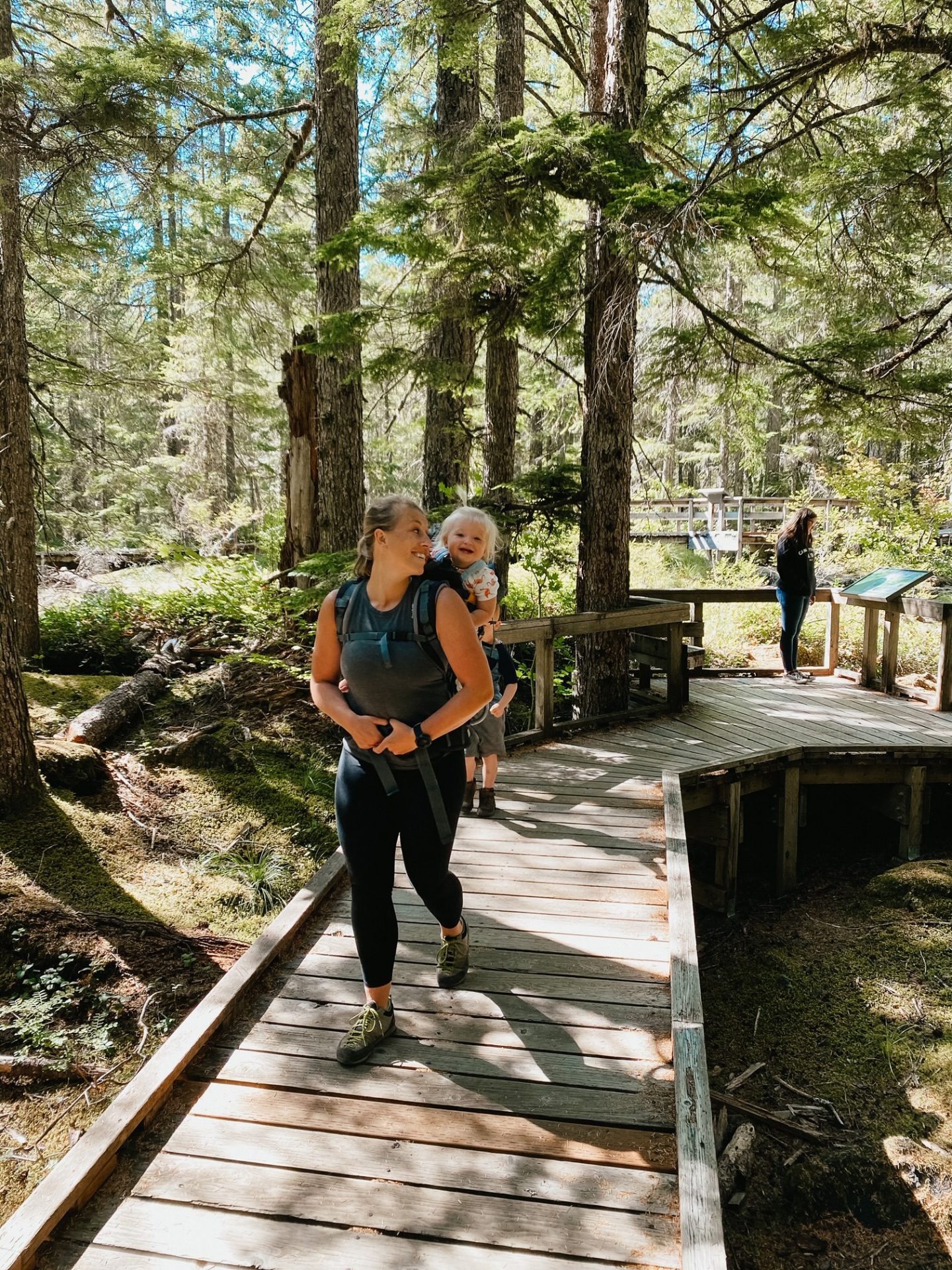 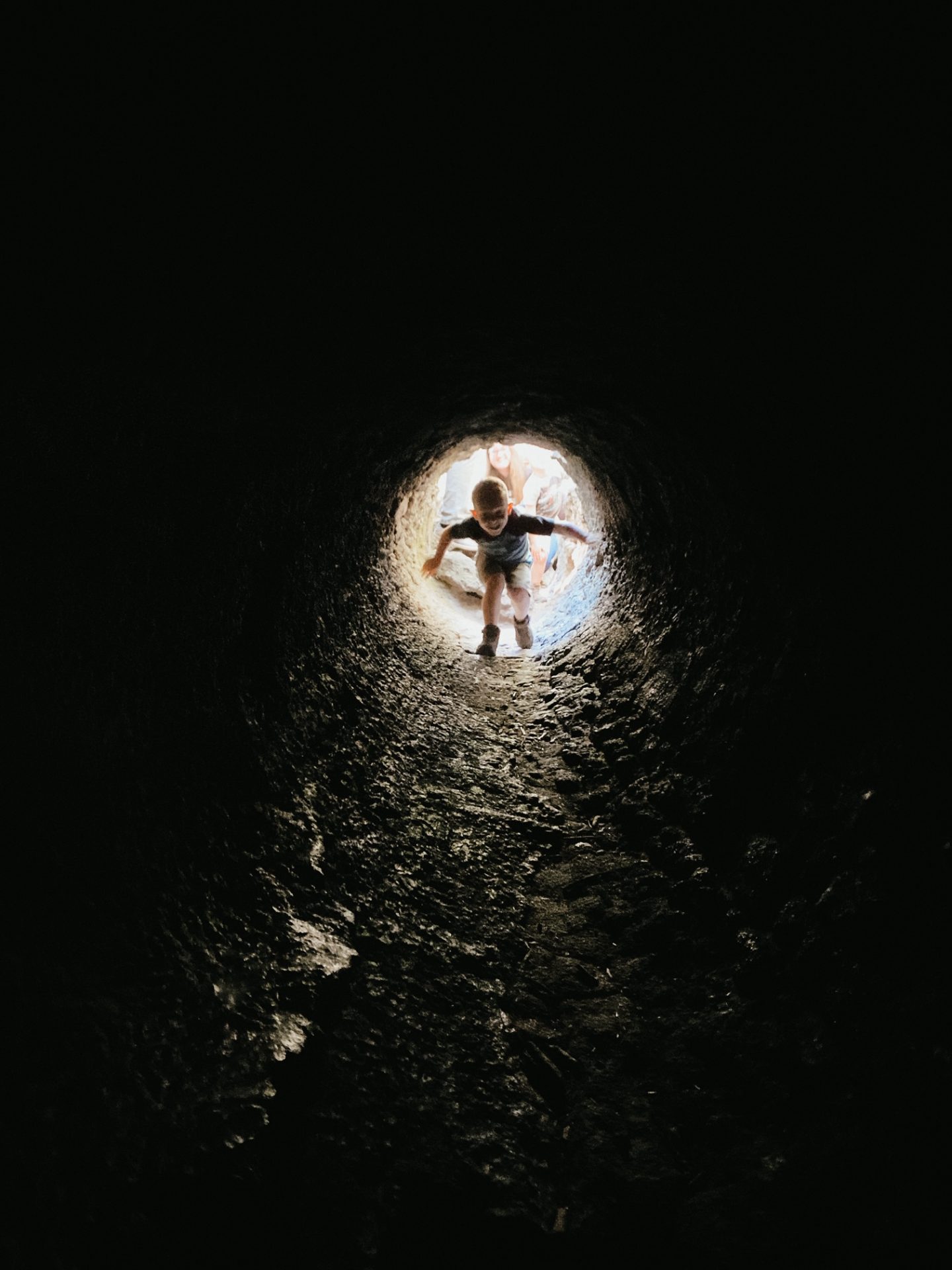 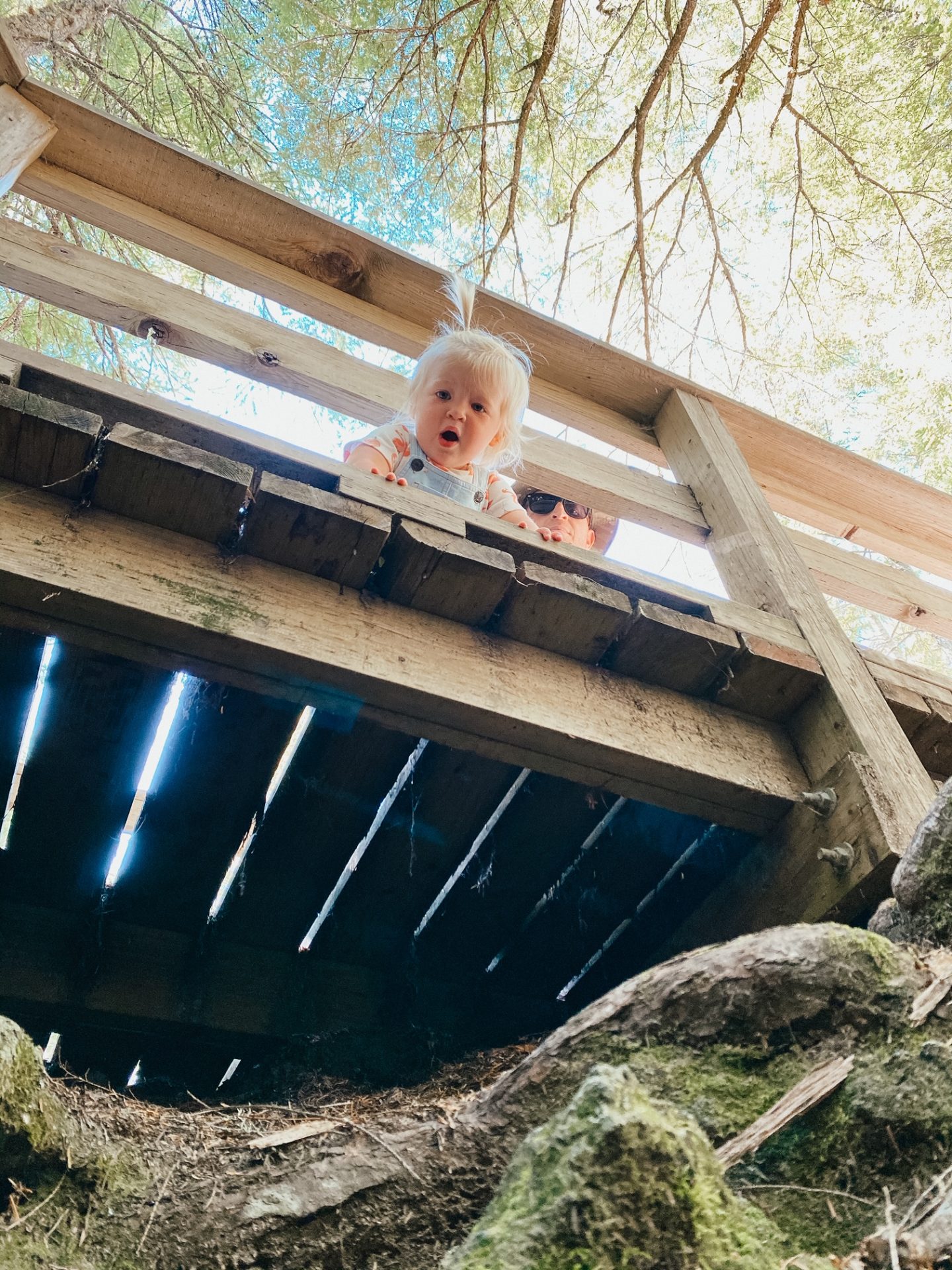 We also made our way to the lava tubes at the Trail of Two Forests site, which was a huge hit with both the adults and the kids, alike. We’d hoped to visit Ape Caves, which is also in the area, but it’s actually closed right now. Ape Cave is a spacious lava tube that is actually the third longest in all of North America. In the caverns, the temperature is close to 42 degrees all year long and home to an abundance of bats. Like I said though, it was closed, so we visited the smaller lava tubes, which people can actually crawl through and explore, as well.

Enmeshed in a boardwalk trail system a mere quarter to a half-mile from that trail head, the lava tubes at the Trail of Two Forests site offer a beautiful combination of a nature walk and place to explore active history. There are ladders that lead down into several of the lava tubes, and many of the tubes are actually interconnected, so you have multiple exits from which to choose. We took turns as parents exploring the lava tubes with the kids, which are pitch black except for the slivers of light coming from the entrances and exits. And, from what people said, the sound from within the tubes resonates above, and people on top can hear anything…so there’s your fun fact for the day.

Exploring Lava Canyon and the lava tubes was a fun one for all of us, and since it wasn’t even on our PNW bucket list, it was an extra special adventure for all of us that we were able to share with good friends. Best of all, while heavily trafficked and busy, we never actually felt crowded out there, and we were able to experience some of Cougar, WA’s most beautiful treasures and monuments with the kids. I doubt these were adventures they’ll forget – and I know we certainly won’t! If you want to spend a day exploring Lava Canyon and the lava tubes, here’s what you should know:

Trail Lengths: These vary. Lava Canyon trail is 5.4 miles and rated moderate on AllTrails, but we only accessed part of the trail. You can complete the long loop, but you cannot complete the small loop. Here’s the information you need if you want to do the trail in its entirety. The lava tubes are located at the Trail of Two Forests, which is only a half a mile loop. It’s not really a hike, and it’s more for the experience of crawling through the lava tubes.

Level of Difficulty: Both loops we did were easy. If you complete the whole Lava Canyon trail, however, it’s rated moderate.

Cost: You need a Northwest Forests Pass, which you can purchase here.

Dog-Friendly: Yes! Dogs are welcome on leashes at both sites.

Tips: If you’re doing Lava Canyon – either the whole or part of the trail – I’d recommend wearing hiking shoes. It gets slick and slippery on both the rocks and the bridges, and the ground likes to shift in other spots. If doing the lava tubes, I’d recommend either using your phone’s flashlight or wearing a headlamp. Also, if you’re not good with confined spaces, I wouldn’t recommend going in the tubes.