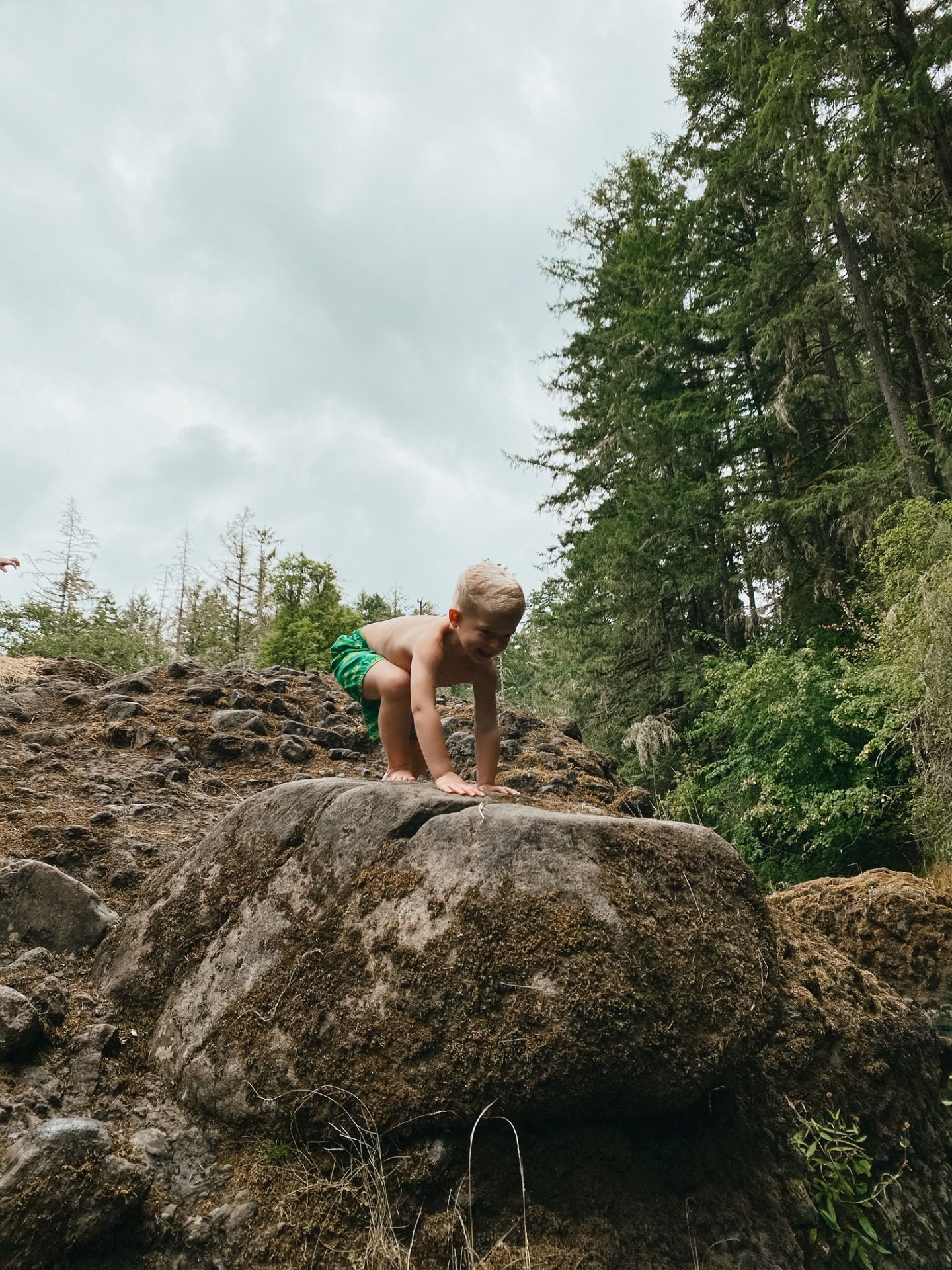 There is so much up in the air right now, and it is so. damn. stressful. I’m not going to lie. Between the upcoming school year, Ryan’s marketplace opening this fall, COVID cases on the rise, things shutting back down, opening back up, then shutting back down again, I feel like there’s really no normal anymore. At all. The only time things feel comfortable and normal at all these days is when we get out as a family to explore. So, like I mentioned before, we’re exploring and doing as much as possible, if only to stay sane amidst all this crazy. Before we visited Emmons Moraine this past weekend, we decided to make the most of a cloudy day on Saturday, as well, and we spent some family time at Deschutes Falls.

If you’ve been following my blog for some time, you likely remember that we actually went to Deschutes Falls Park way back in 2018 about a month after we’d moved here. It’s a private park out in Yelm that boasts a 27-foot waterfall, a 400-foot gorge, ultra-easy hike, and easy access to some beautiful nature views just 45 minutes from JBLM. Since Mieke wasn’t even in the picture way back then and both Porter and Spencer were a lot younger the last time we went, we decided to go back and spend some time cliff jumping and swimming at Deschute Falls.

As we remembered from last time, it’s not a trail that we’d even consider a hike. It’s a well-established trail that leads directly to the waterfall views, but those views are pretty well obscured by fences and cables designed to deter people from getting too close to the edge. I guess in the last few years, there have been a lot of accidental deaths, and Thurston County is doing its best to ensure those deaths don’t happen again. Since we’ve seen the waterfall before, and we really just wanted to have some fun jumping and swimming, we took the path to the left and walked another quarter mile towards the river area that feeds into the falls. 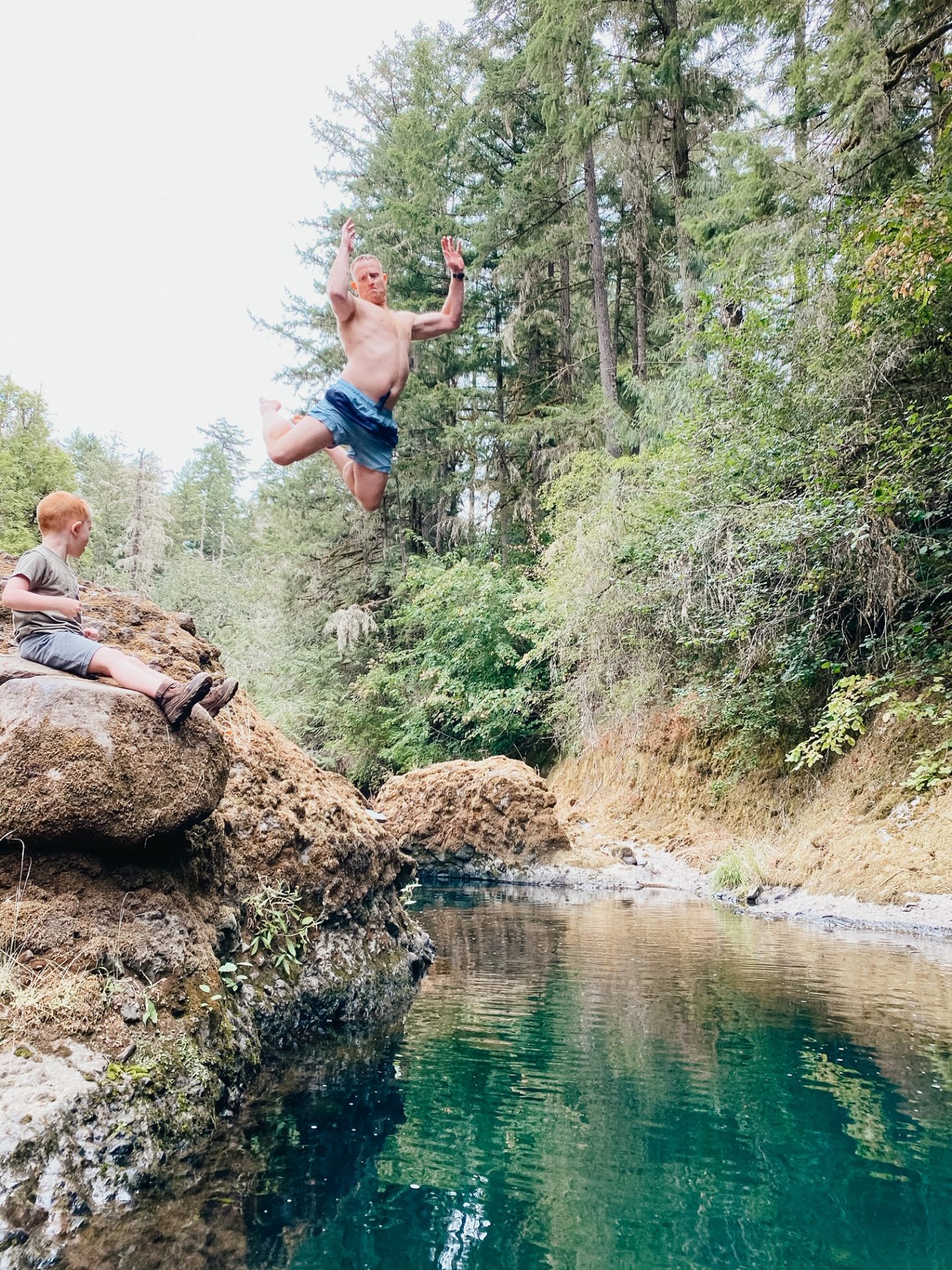 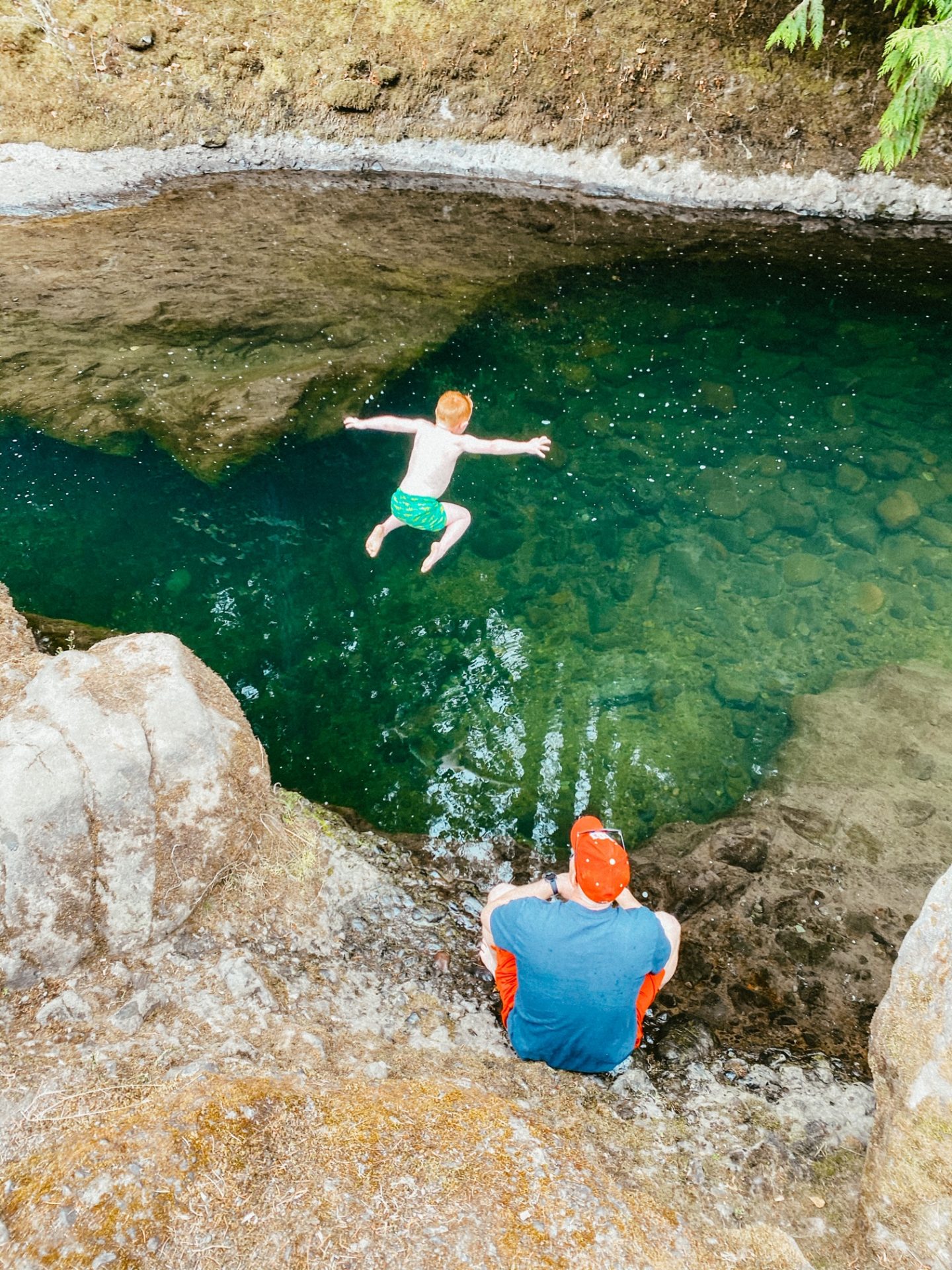 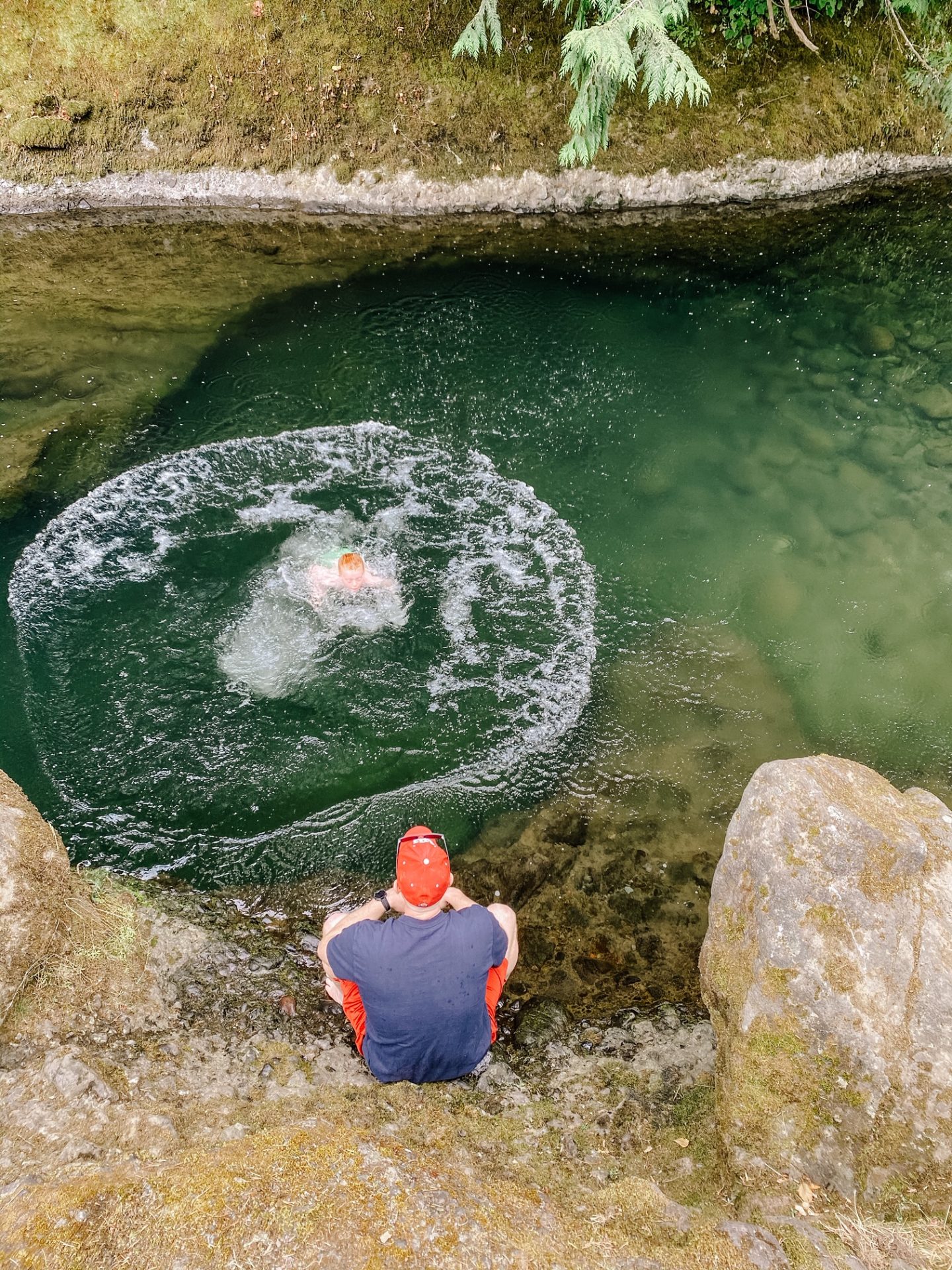 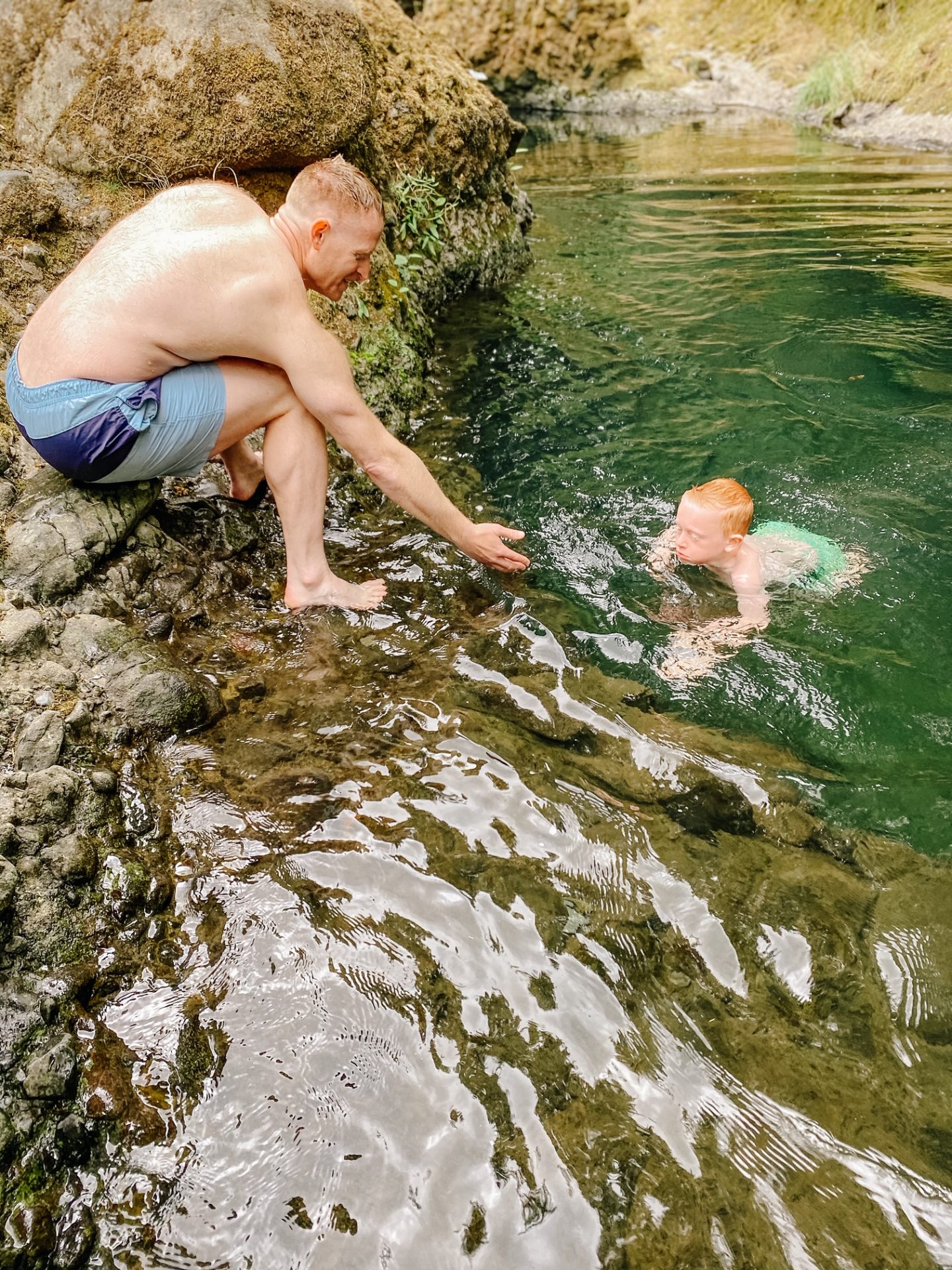 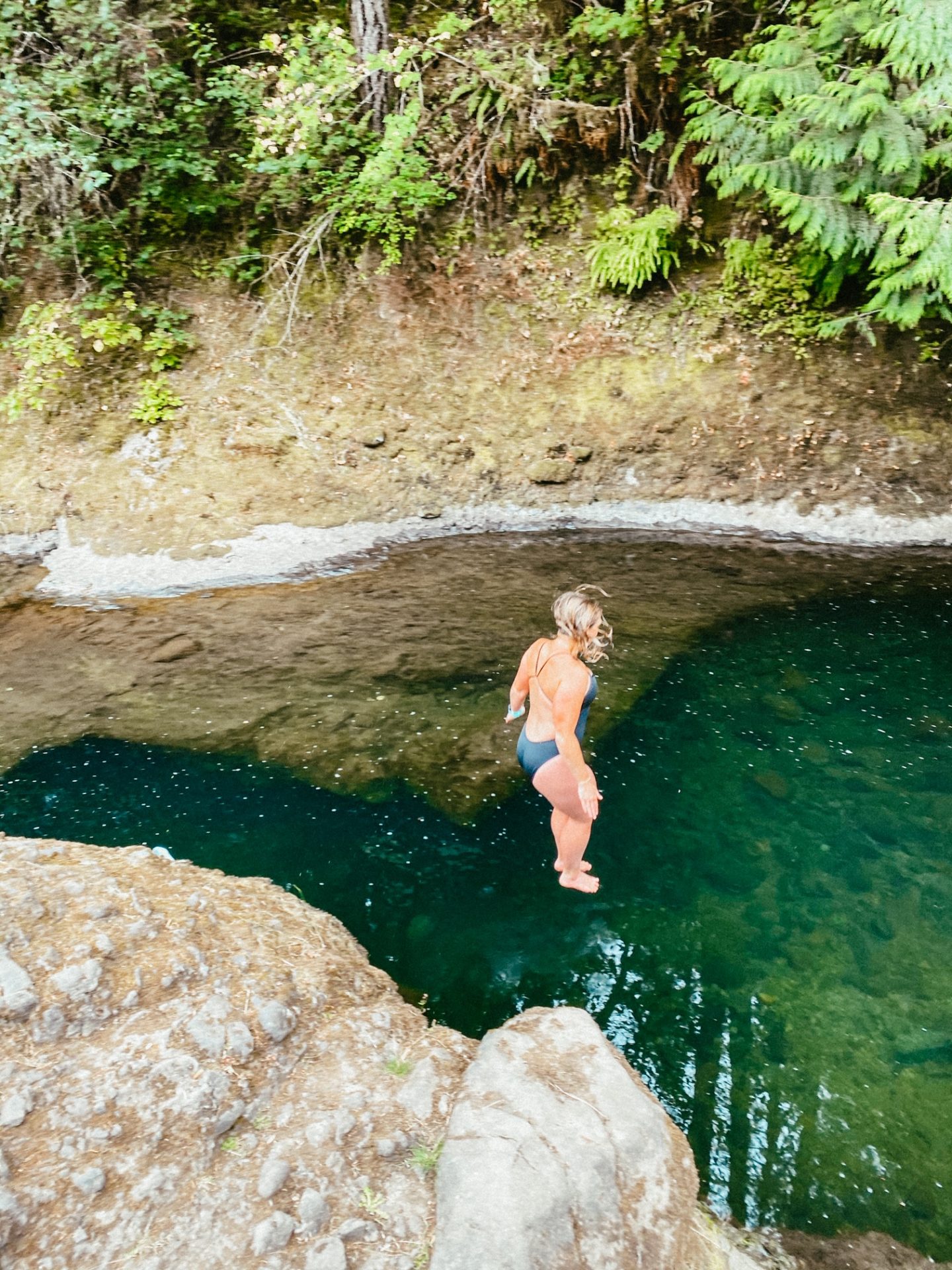 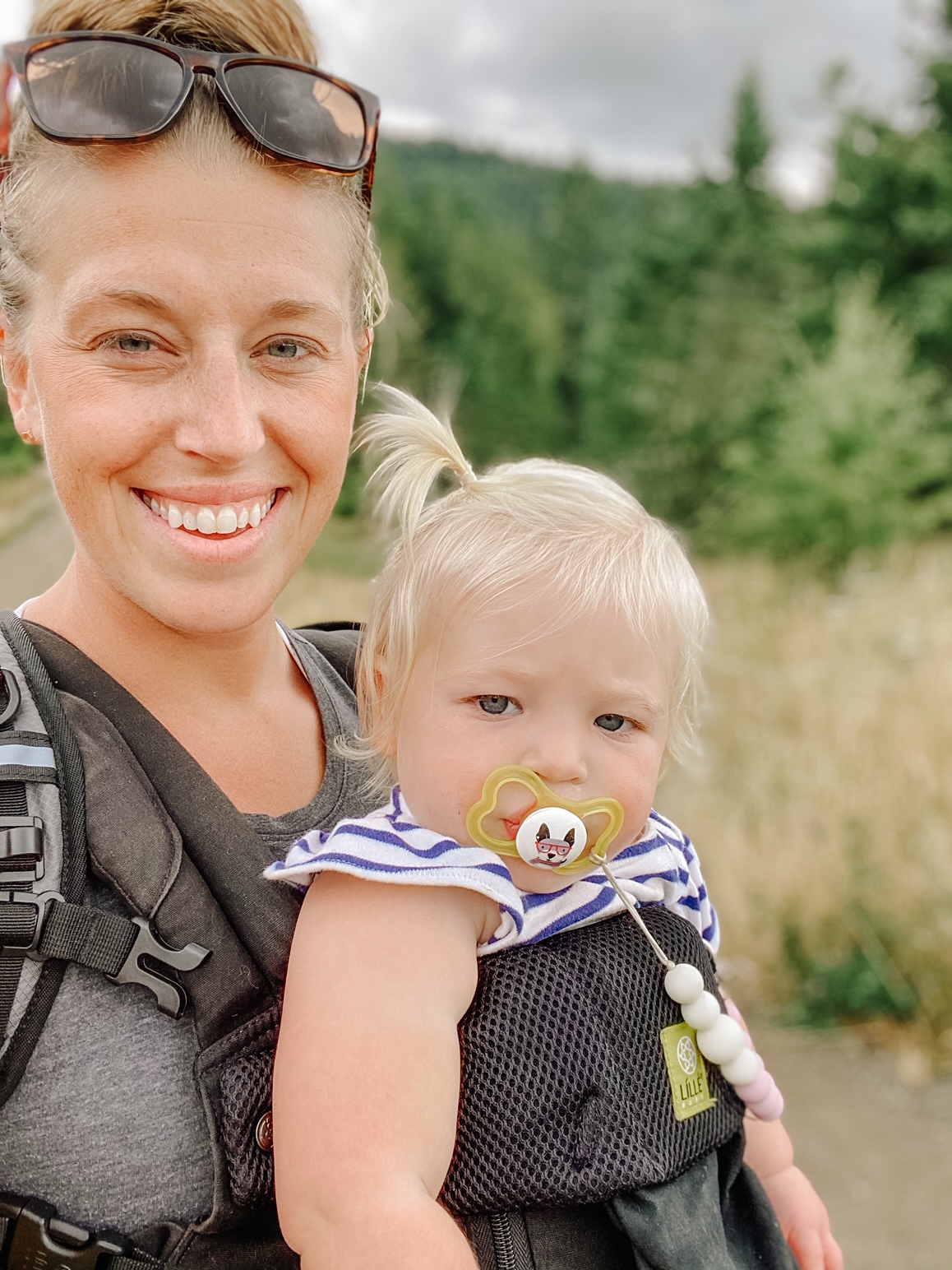 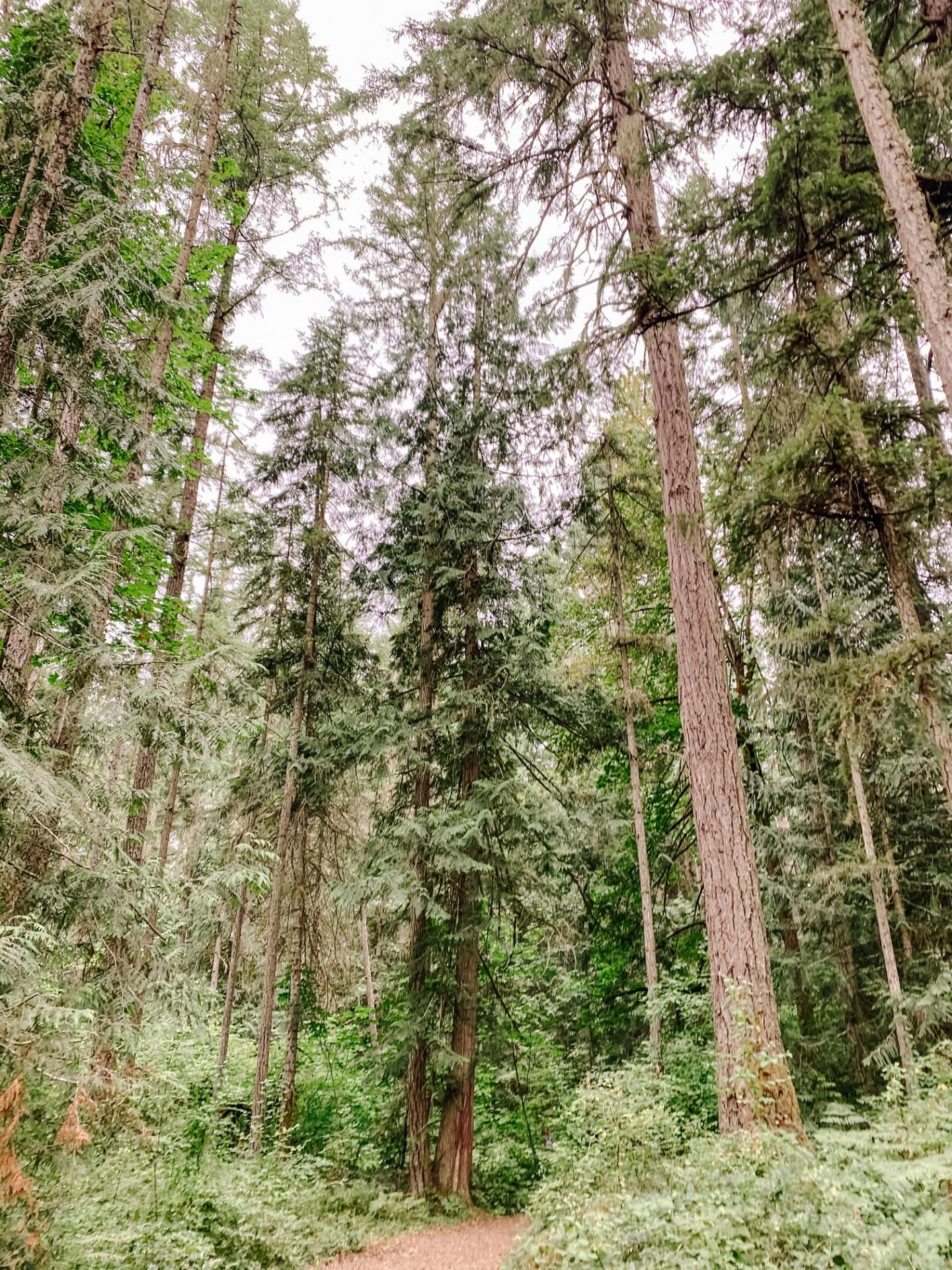 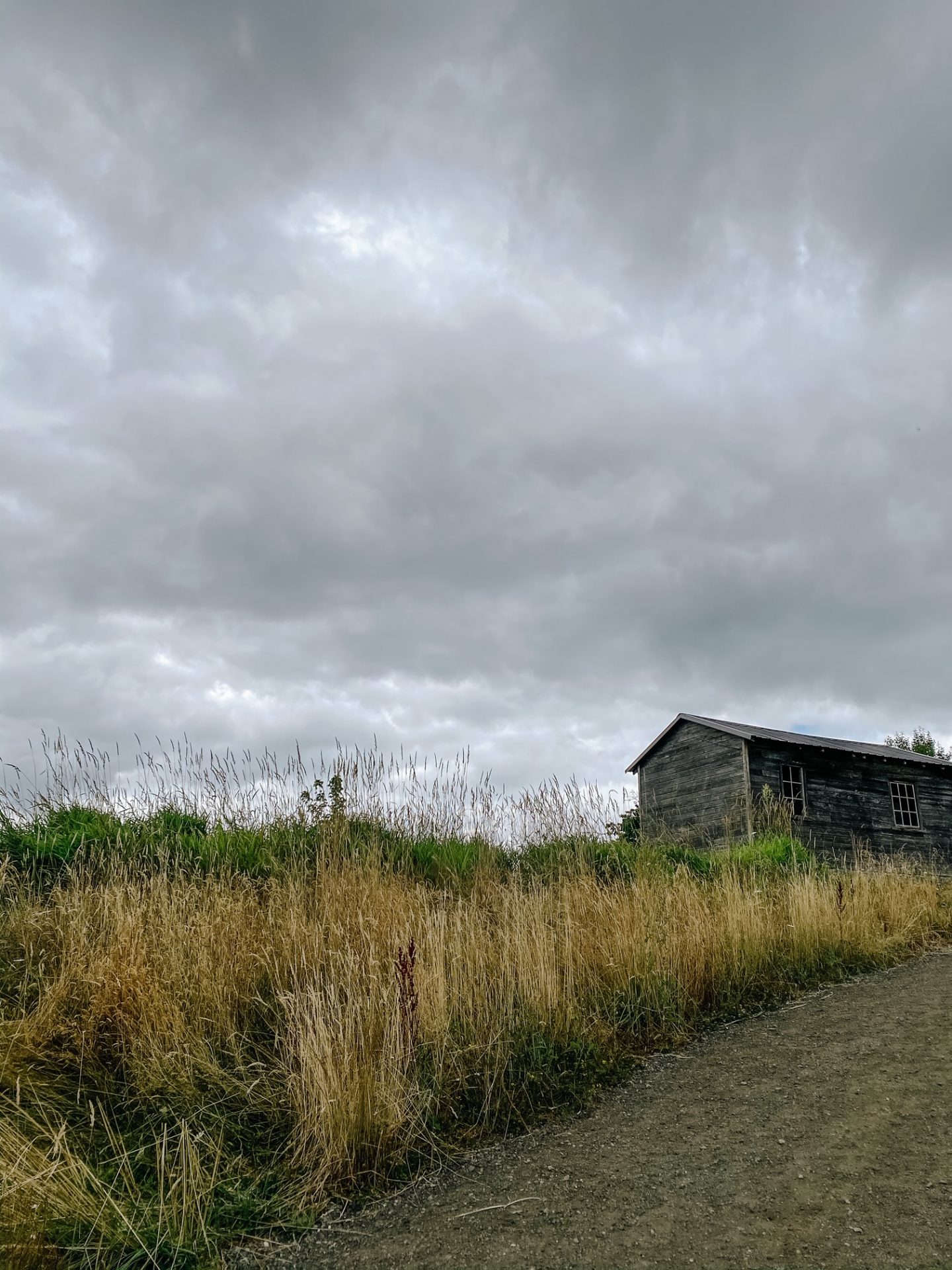 It’s a beautiful spot where the petite rapids lead to large, crystal-clear cold pools of water lined with large boulders perfect for a beginner’s “cliff” jump. I say “cliff” in quotations, because I really don’t think it can be qualified as a cliff. The jump, itself, is only about eight feet high, and the lower boulders are about four or five feet. Nevertheless, we were ready for an adventure, so one-by-one, we quickly deck changed and got ready to take the plunge – literally.

If there’s one thing I’ve learned about swimming in cold water, it’s that you just have to jump. If you think you’re going to wade in the water and slowly acclimate, allow me to put that idea to rest. You won’t. You will freeze your butt off before you get started (ahem – I’m looking at you, Green River Gorge), so you might as well just jump. So we did. I jumped first. Guys, it was freezing. I’d say it probably rivaled some of the coldest water I’ve ever swum in before, hovering around 54 degrees. It immediately takes your breath away, but there’s also this amazing feeling of empowerment when you do it. So, Ryan jumped next. FYI – Ryan didn’t jump last time, but he did it a few times this year, and I love that he’s not afraid to take the plunge either!

Even better, both our little boys decided they wanted to do it, as well. Spencer can swim, so we warned him profusely, and we told him it was freezing. He was persistent though, so we told him he could do the shorter jump, and Ryan went to the bottom to wait in case he had any trouble. Spence jumped with enthusiasm, and when he surfaced and paddled in, all he could say was, “you were right! You were right!” We tried to deter Porter from jumping because he can’t really swim, and that little dude has zero body fat, but he was insistent. So, I got in the water (brrrrrr!) and waited for him at the bottom while he, too, jumped. He was a little less enthusiastic, but I’m so proud that he loves doing scary, bold things!

Honestly, it was so much fun going back to a spot we’ve been to before and share some new, fun memories together. There were a lot of laughs, a few tears (mostly from Porter post-jump), and way too much fun. I’ve mentioned the details before, but if you want to cliff jump or spend some family time at Deschutes Falls, here’s what you should know:

Trail Length: If you go out to the river, it’s about 1.5 miles roundtrip, max.

Parking: There’s a free lot at the trailhead, and overflow parking is along the street; no pass is required.

Bathrooms: There’s one clean portable toilet at the trailhead.

Tips: If you plan on swimming or jumping, bring towels and something warm to drink because that water is COLD!