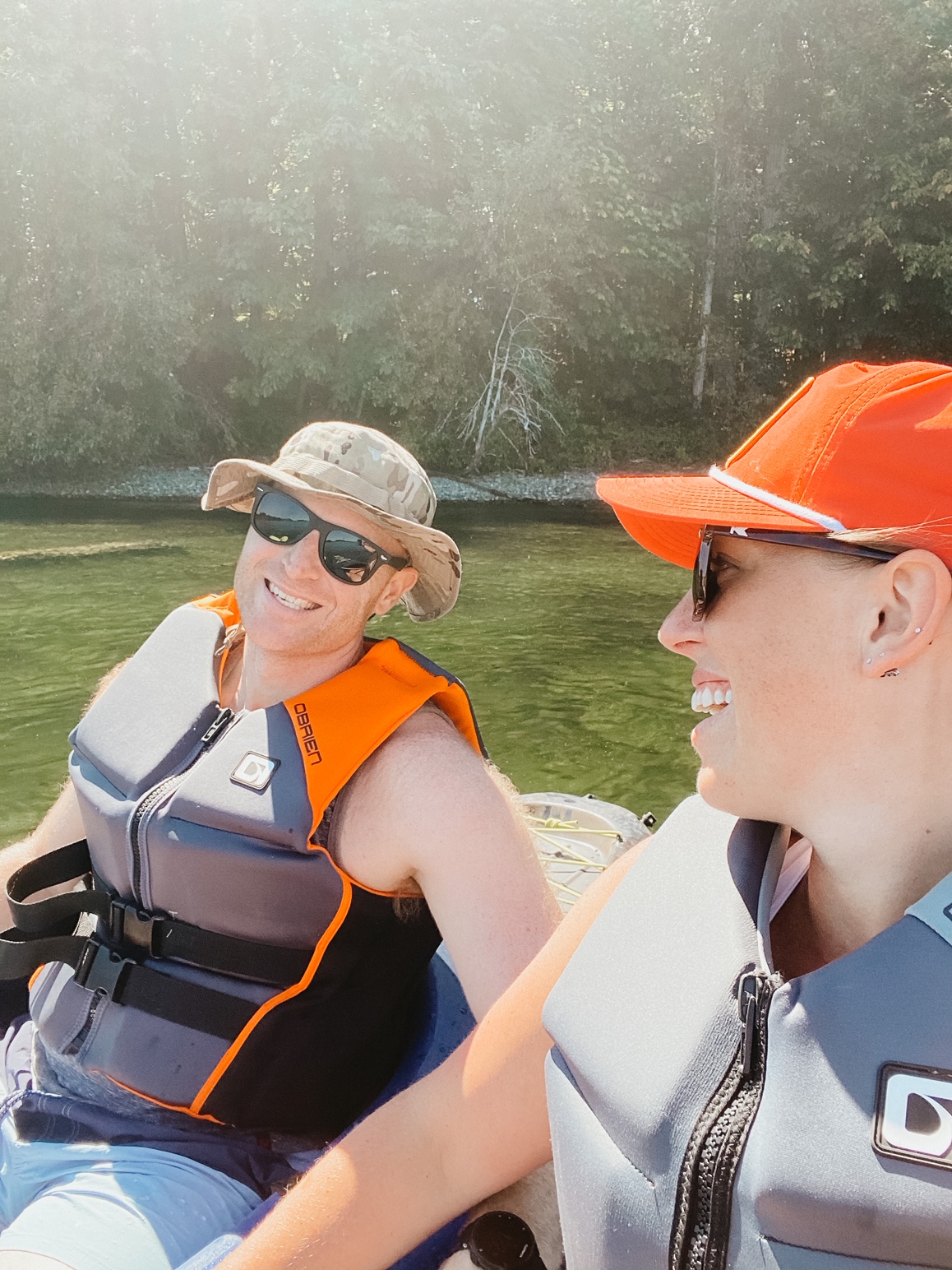 Between COVID, the Army and, well, life, Ryan and I realized last week that we hadn’t had a single date since February. I think a lot of couples are in the same boat – especially those with children – but with school starting soon, Ryan’s block leave ending soon, and reality coming at us fast and hard, we knew we had to make some time for togetherness. In the past, we’ve spent a bit of money on dates. We’ll go to a nice restaurant, or we’ll have drinks. But, again, because of COVID and trying to be more financially responsible in the wake of lots of changes this past spring and summer, we wanted to play it a little closer to home. That’s how we found ourselves on our kayaking date at American Lake here on North Fort.

Last week was Spencer’s last full week of daycare and, because of remote learning, we knew it was the last chunk of time we’d have together in quite a while. So, we originally set out to rent kayaks at the Adventure Center on JBLM. Our good friends, however, were heading out of town (we joined them the next day near Mount St. Helens) and graciously offered us use of their kayaks. While the kids were at school, Ryan removed all the seats from the Odyssey, we shoved two single kayaks in there, and we headed out to Solo Point to explore the Puget Sound by kayak.

In true 2020 fashion though, Solo Point was closed – barricade and all. 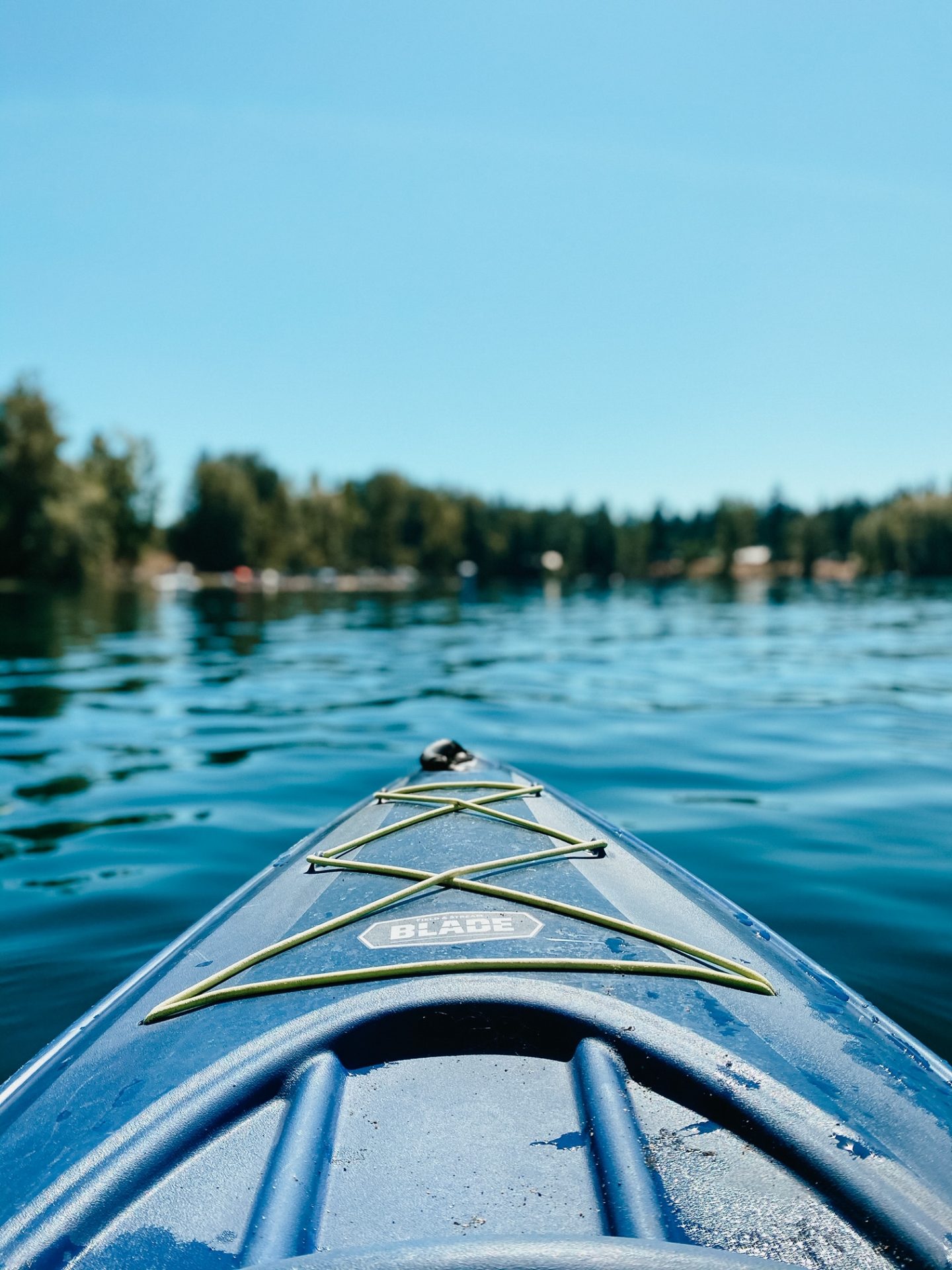 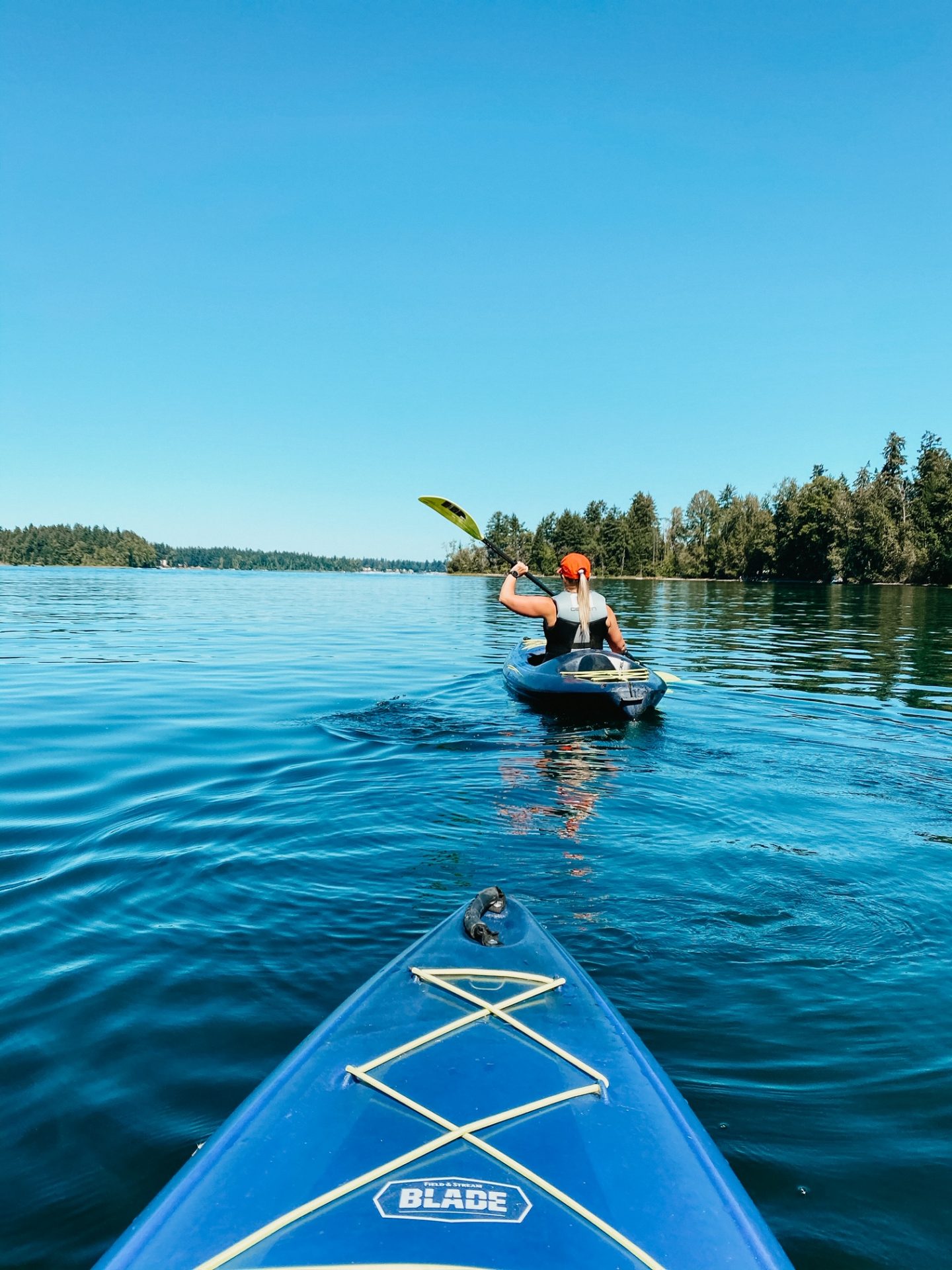 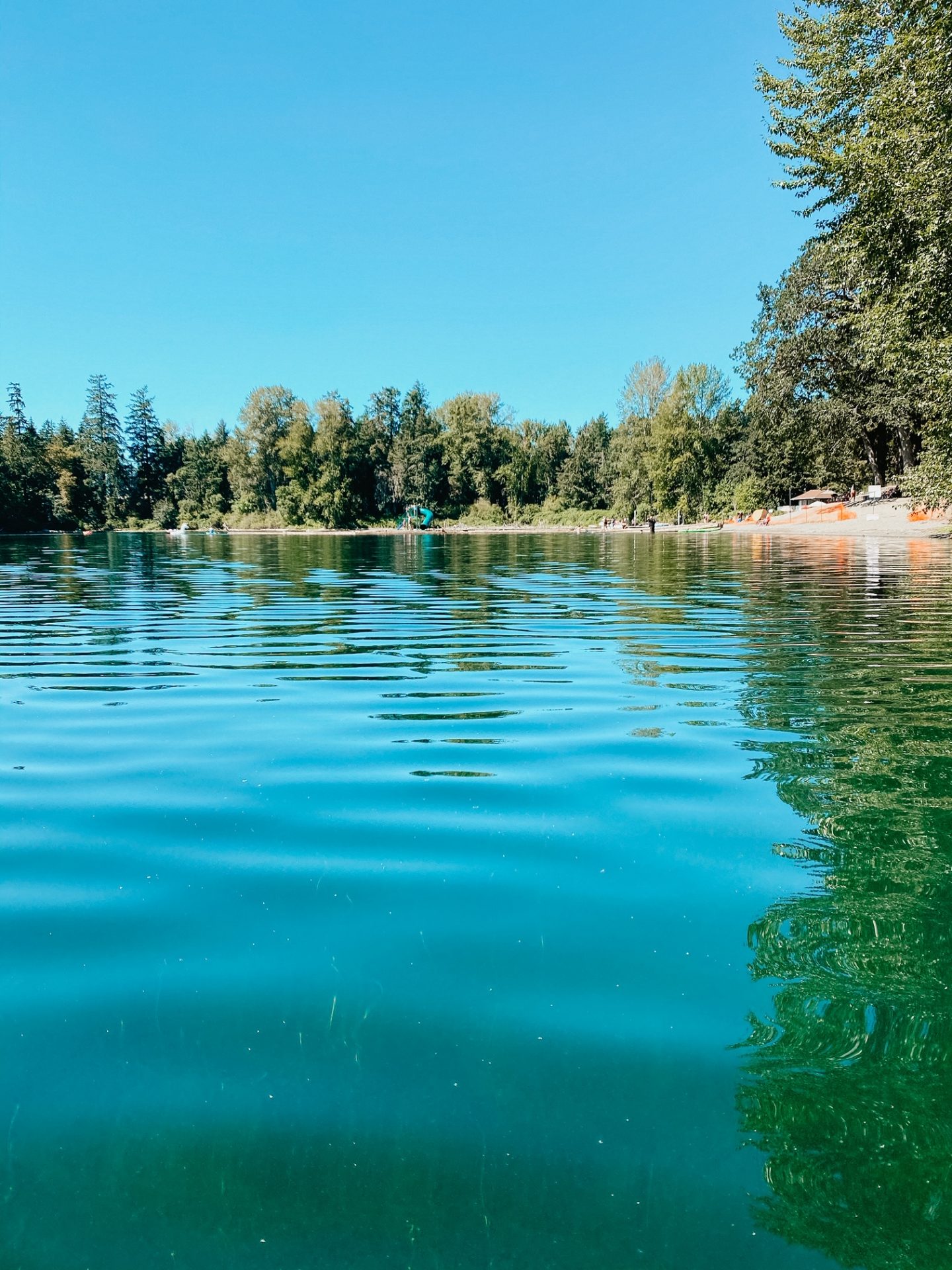 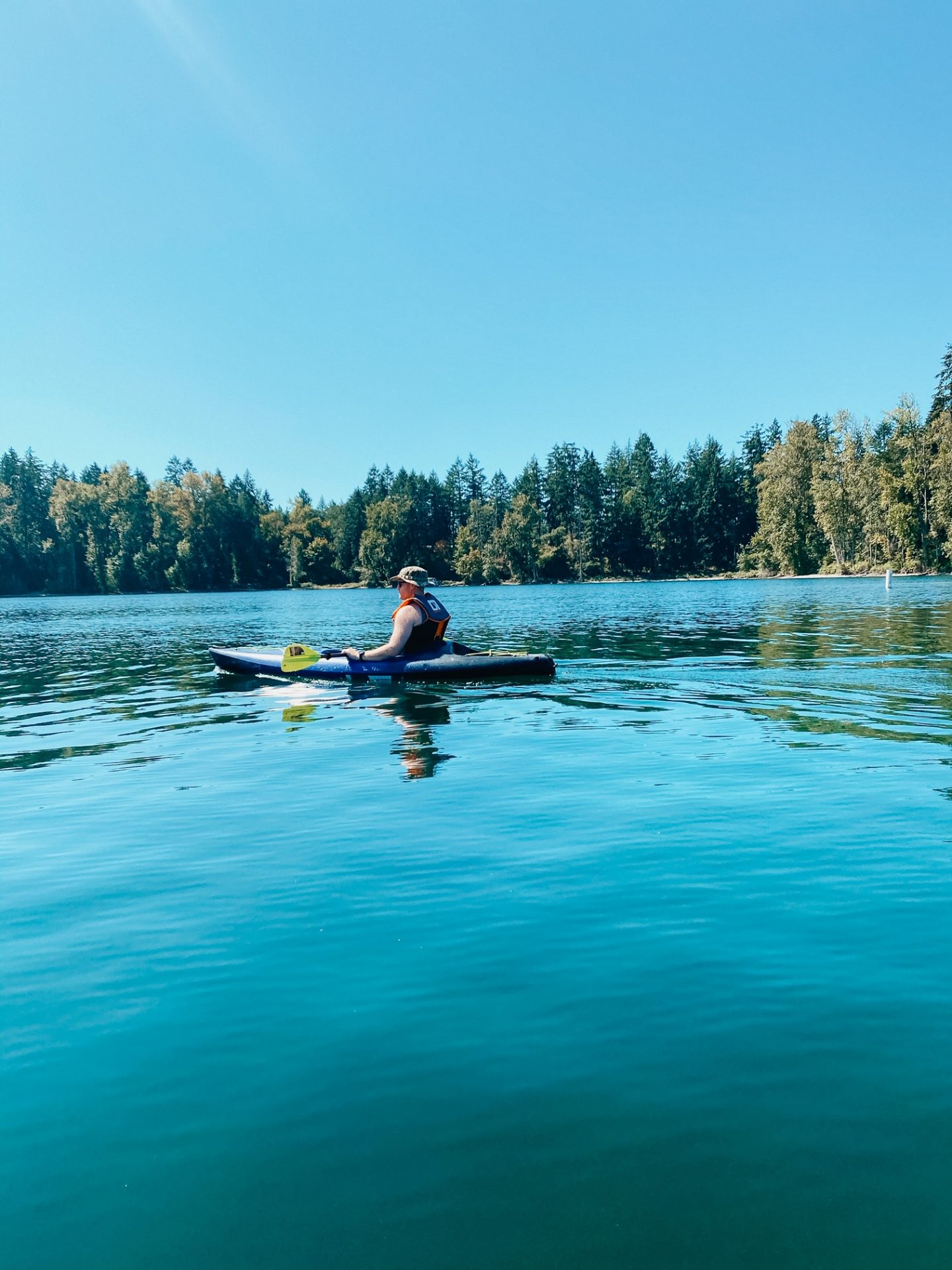 Rather than fail, we decided a change of venue was in order. So, instead, we fulfilled our kayaking date at American Lake, just a mere 5-10 minutes from our house on North Fort. We put the kayaks in at the boat launch, put on our life vests like the law-abiding citizens we are, and set out to explore the lake together. We’ve had our eye on kayaks for a while, but we’ve wanted to do some kayaking together first before investing the money. Let me just tell you, my friends; worth it. Though the lake is pretty heavily trafficked by power boats, we explored the outer shores, and we even found a swimming area with a water slide (what?!?!) that we didn’t know existed. Again – worth it!

I’ve always been under the impression that dates kind of need to be big and elaborate. Well-planned with lots of effort put into them. Spoiler alert though…that’s not the case at all. We kind of flew by the seat of our pants on this one, opting for a date that was close to home, free, and so much fun. We also avoided a date laden with foods and gluttony because, I’ve mentioned before, we’re both working hard at embracing a healthier, cleaner lifestyle – not just for my Lyme Disease inflammation, but for overall well-being, as well.

Honestly, this date was such a refreshing one and, though I have zero clue when we’ll be able to have a date again, it was definitely just the ticket. I’m so grateful for great friends who helped make this happen and time with my favorite guy before the chaos of Army life and parenting hits again full-force.

Tell me – have you had a date recently? Have you ever just done a simple impromptu date?