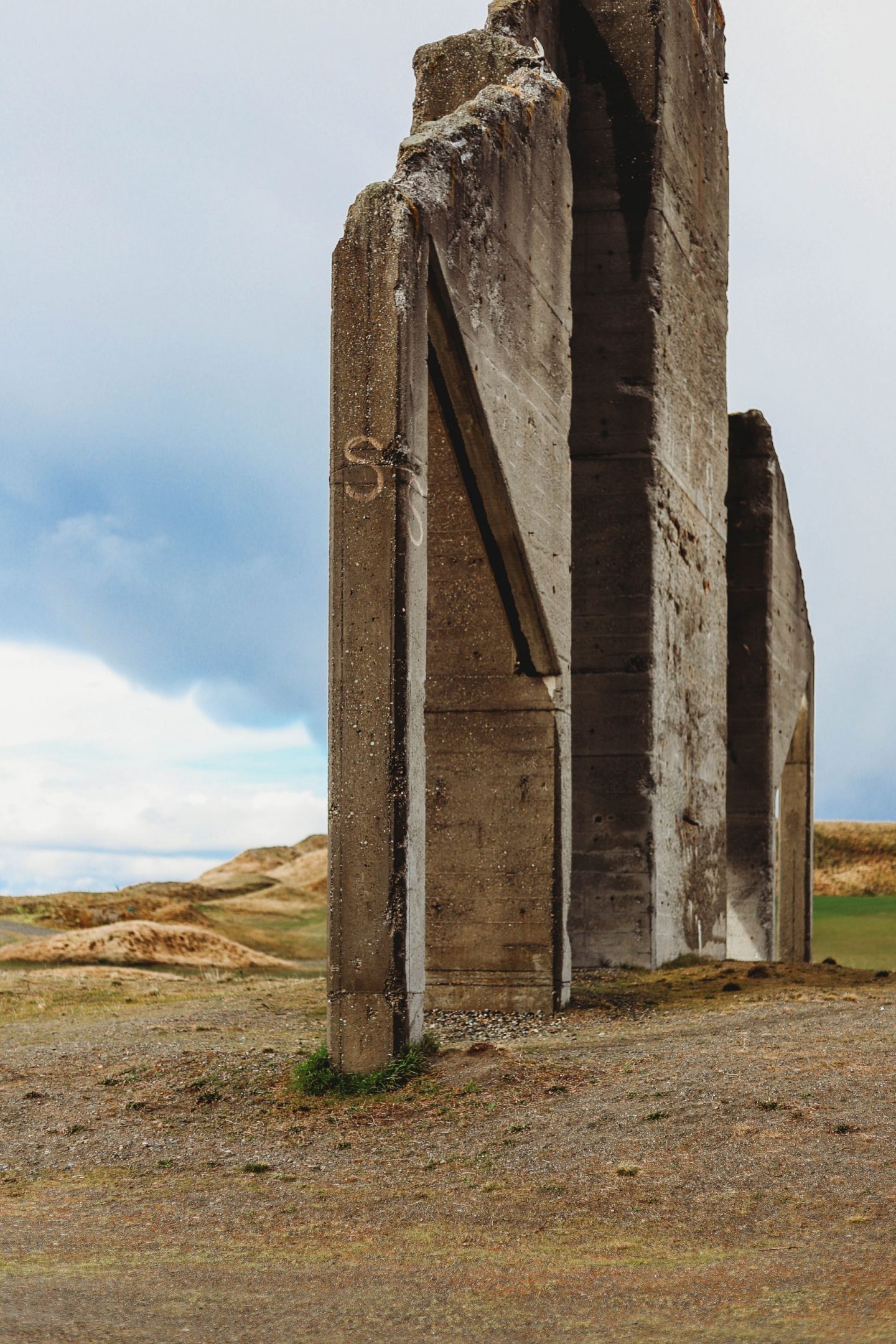 We’ve done a lot of hiking and exploring during our three years at JBLM and in the PNW, but I’d be lying if I said we did a lot of adventures close to home. Sure, we have our go-to favorites like Summer Cove, American Lake, and Tolmie State Park, but there are actually a ton of little places to explore locally that I’ve overlooked in the past. Since this was the first weekend without Ryan again during his TDY, we decided to stay close to home and explore Chambers Bay Loop Trail in University Place, WA.

Fun fact; just before our first lockdown happened in March 2020, we went out to Chambers Bay for a nature walk. We overshot a little, and we ended up on the paved Chambers Bay Loop hiking trails, which had plenty of switchbacks, climbing, and epic water views. We didn’t, however, start at the spot I’d hoped, and we didn’t get to explore the mining relics of Chambers Bay.

Mining relics, you say? Yes. Sticking out like a sore thumb from the Chambers Bay Golf Course right against the sound, you’ll find these massive concrete structures. They’re all that remains of what was once an old mining operation in which they exported gravel from the Chambers Bay location. Honestly, it’s a pretty cool architectural and aesthetic feature because they soar above the rest of the landscape and draw fascinated crowds to these popular walking trails. 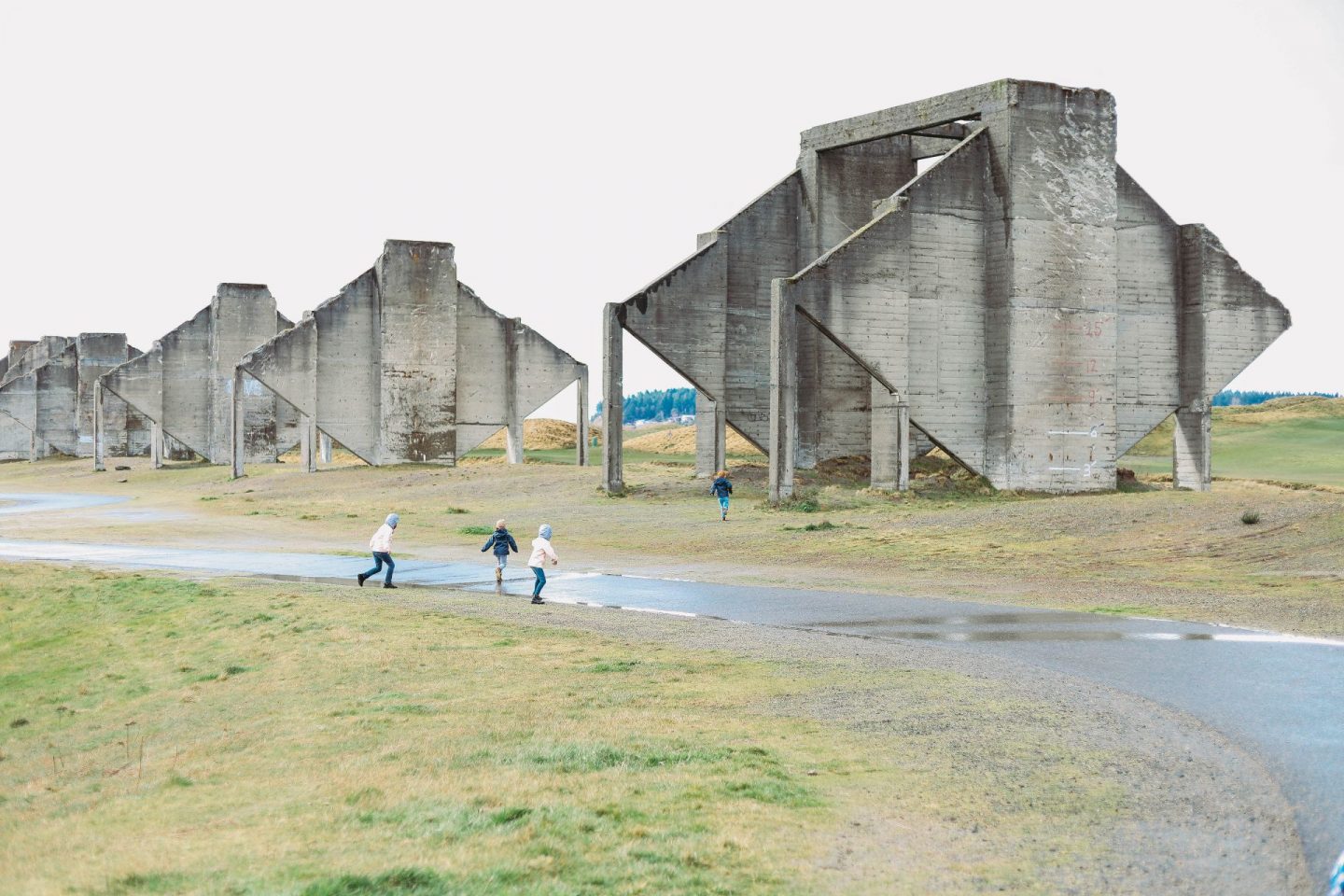 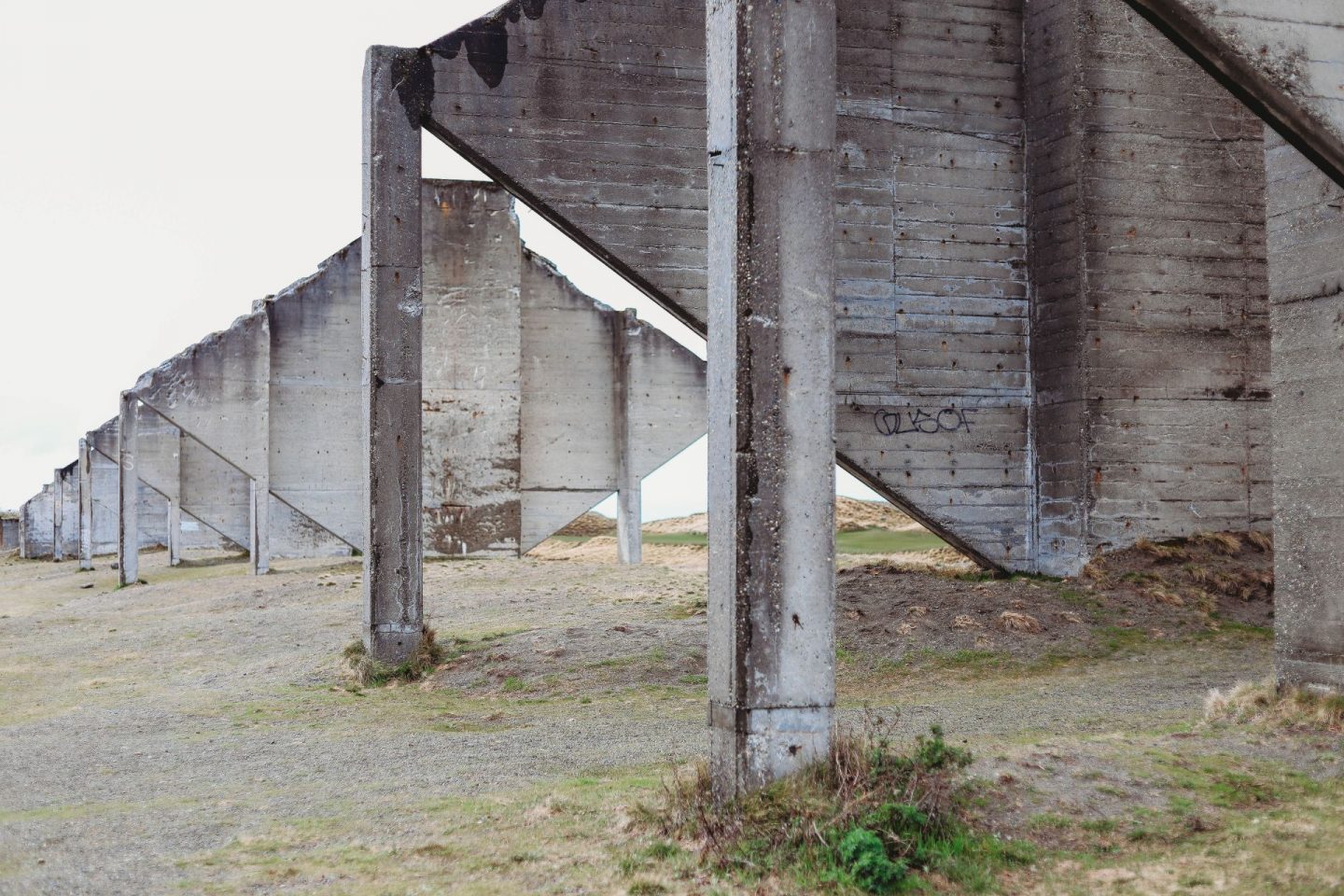 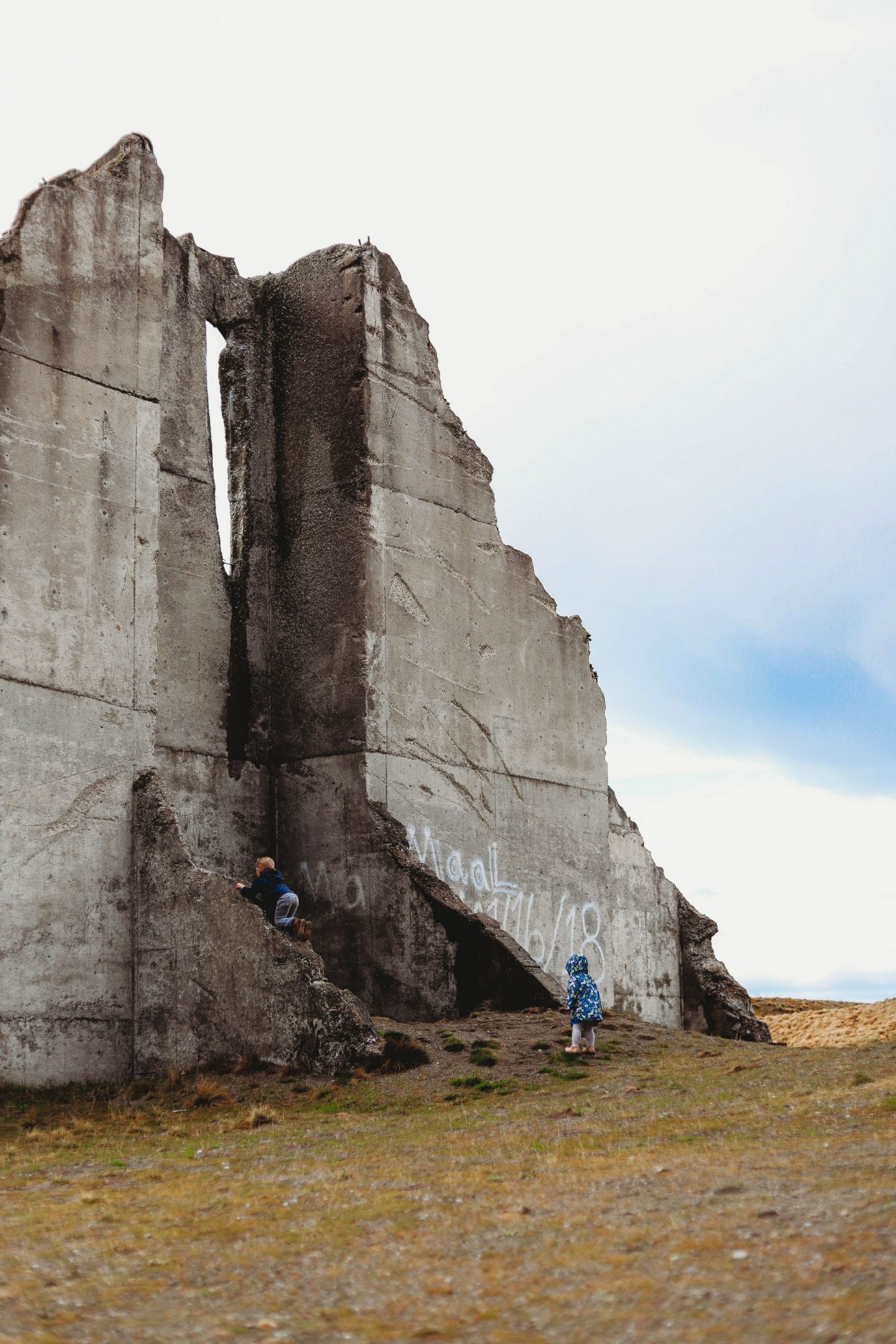 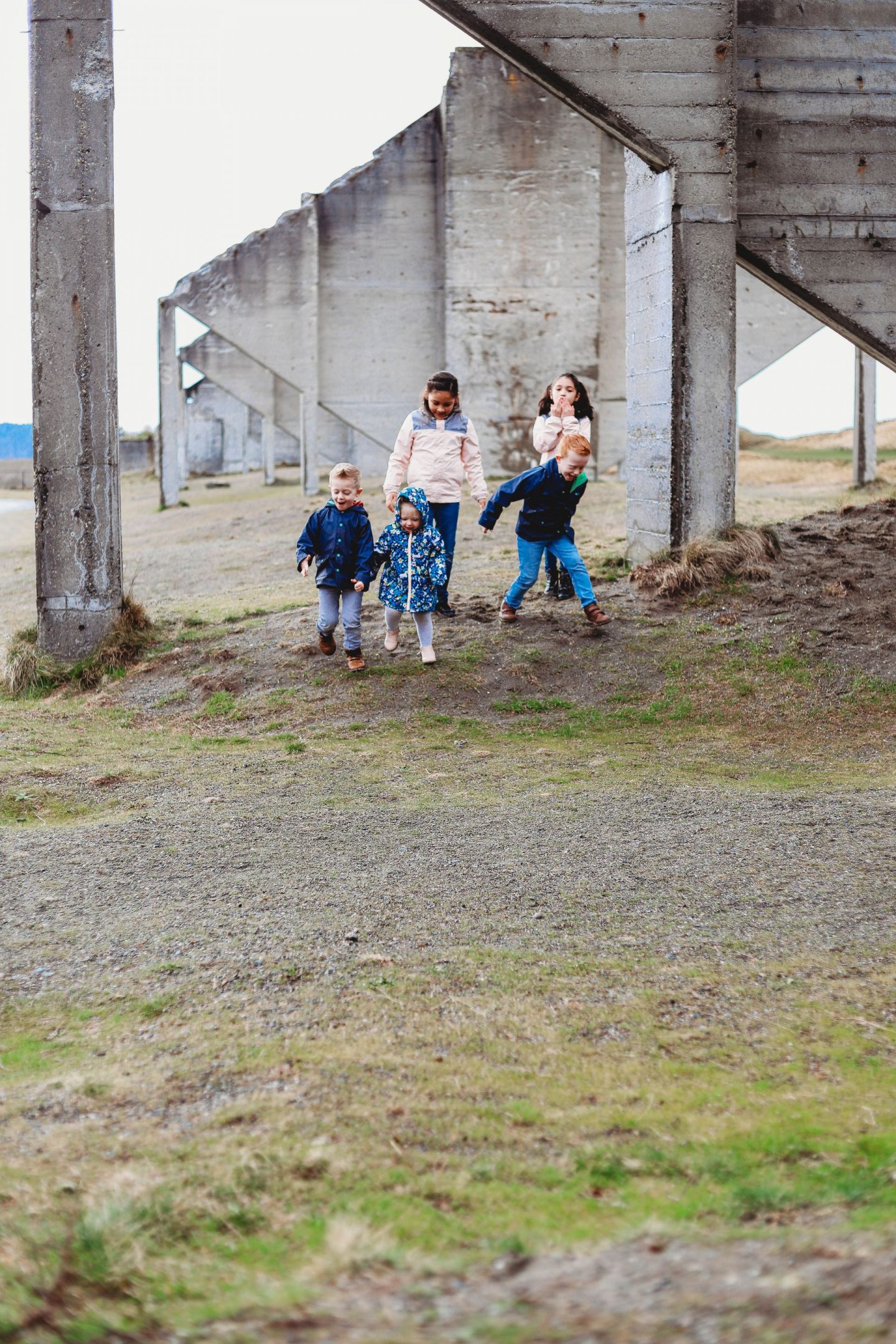 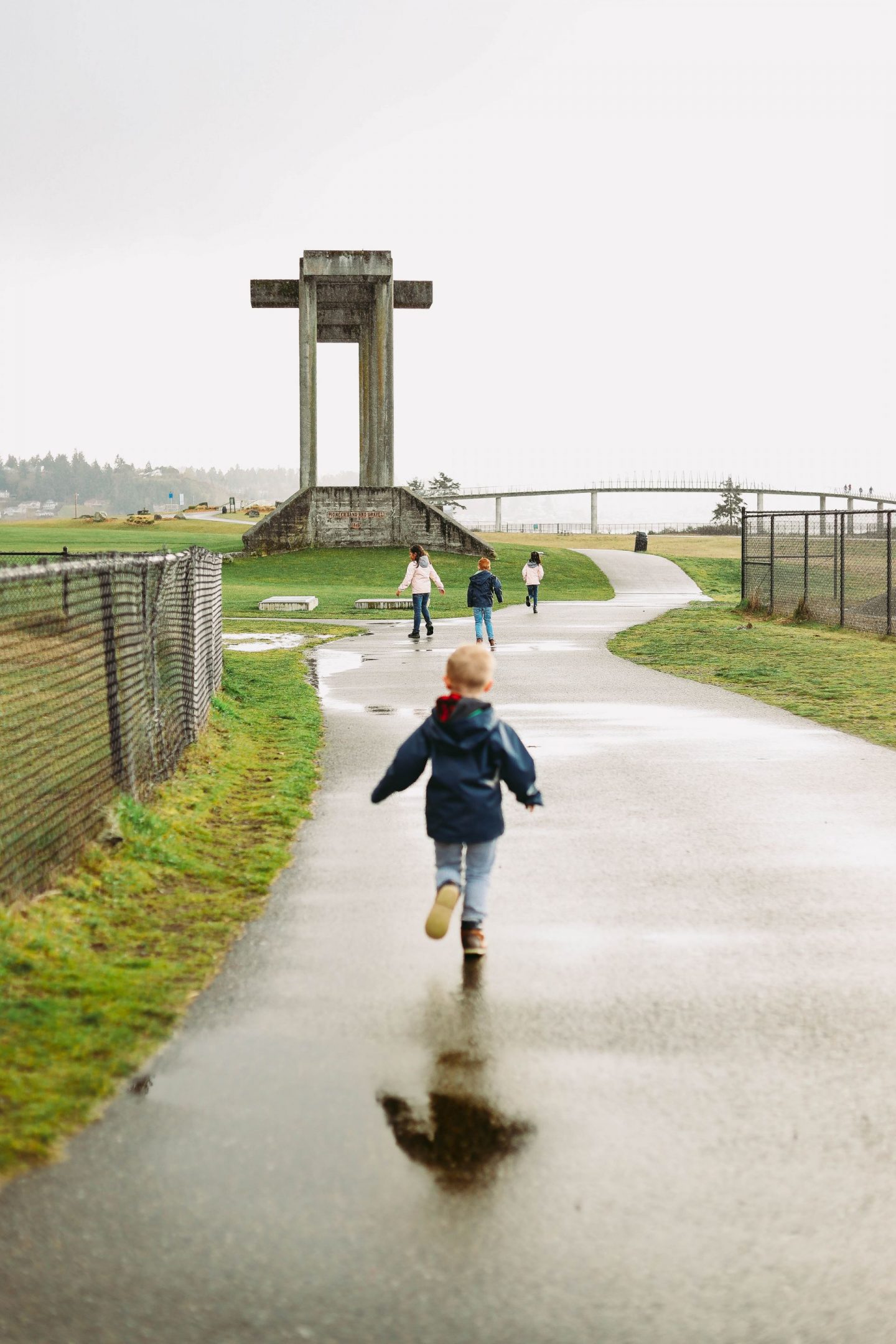 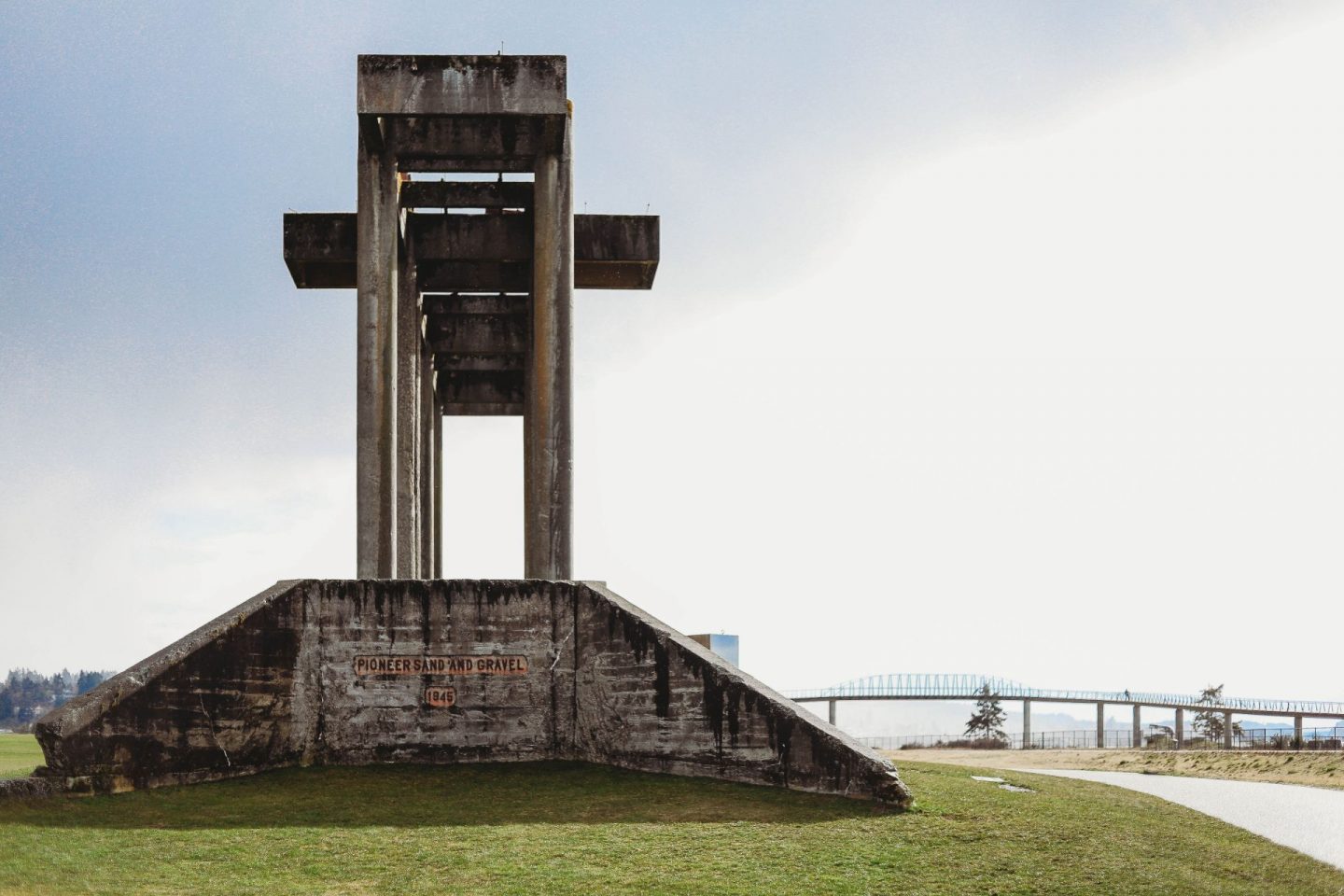 This past weekend’s fickle weather streak continued, and we alternated between an hour of sun and a few hours of intense rain throughout the weekend. We didn’t want to miss the opportunity to get outside and enjoy the views and adventures though, so we drove the 25 minutes out to University Place to Chambers Bay Loop Trail anyway. True to form, it started pouring within about five minutes of us arriving, but it actually turned out to be in our favor.

The lower lot, which is almost always full, cleared out quickly when the deluge began. Maribel, the girls, my kiddos, and I decided to wait it out, and within 15 minutes, the rain stopped (again, in true PNW form). Since we parked at the lower lot of Chambers Bay Golf Course, we were within about a quarter mile of the first of the Chambers Bay concrete structures to start. The kiddos had a blast, and it was so cool to see them as just a part of the rest of the landscape. 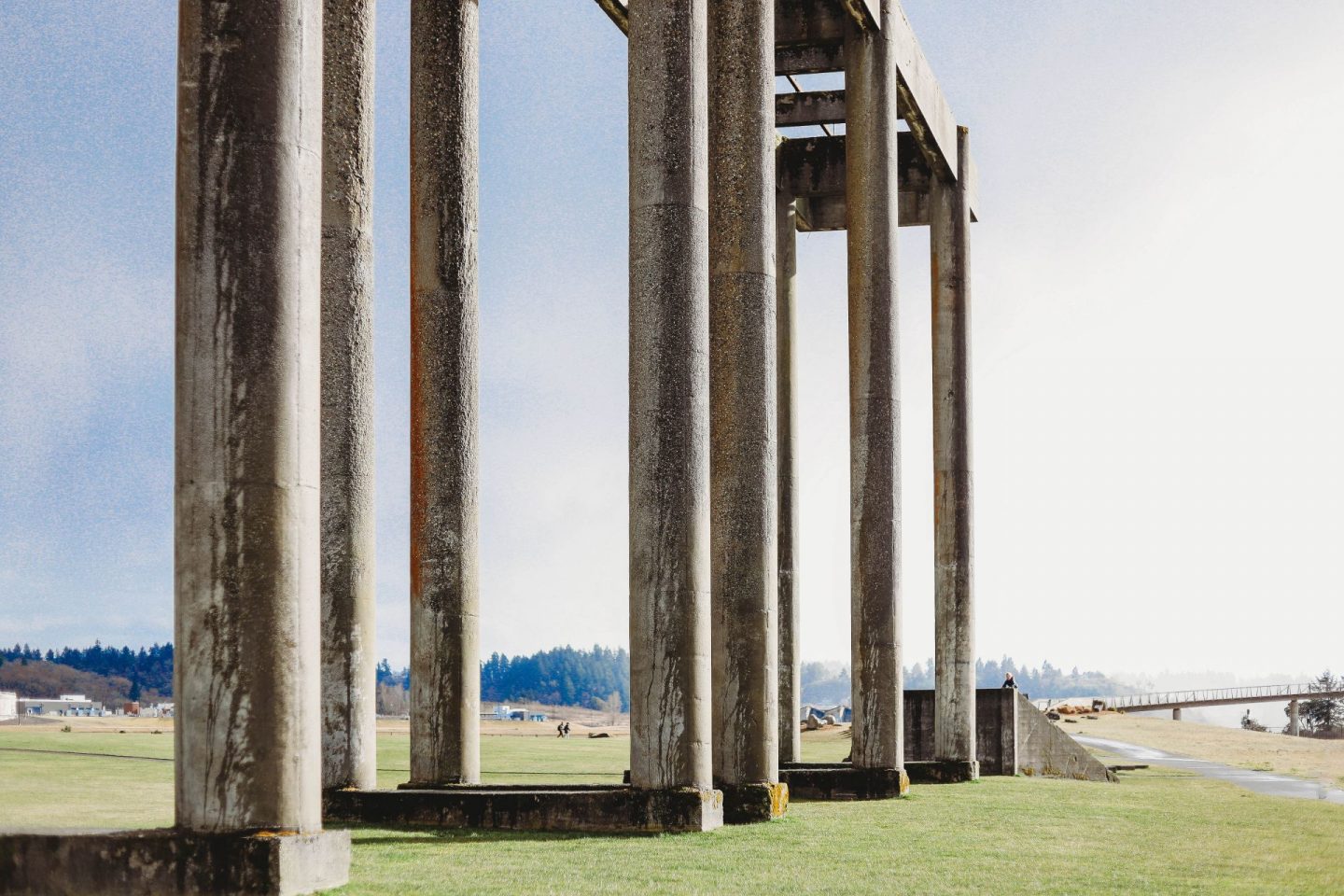 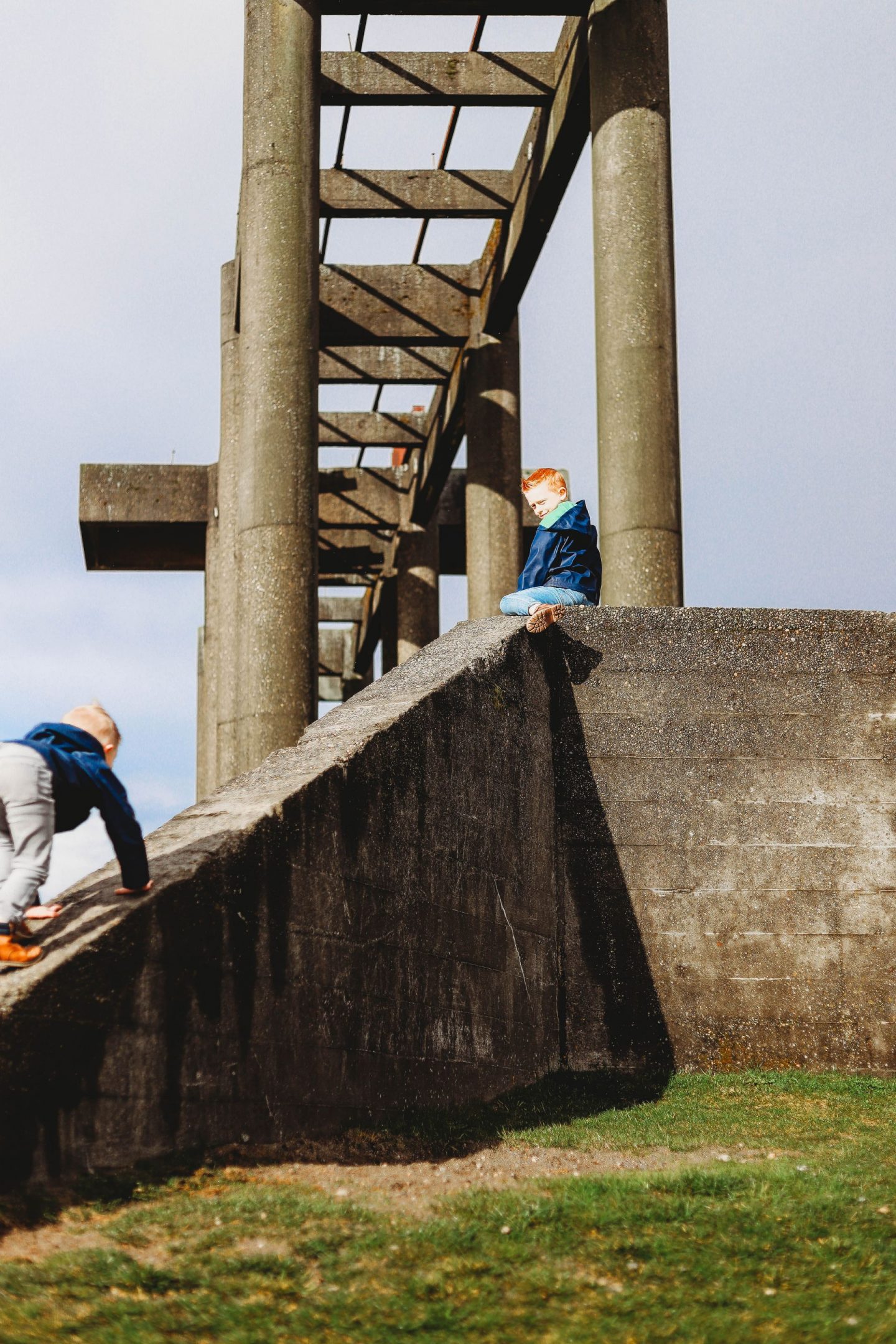 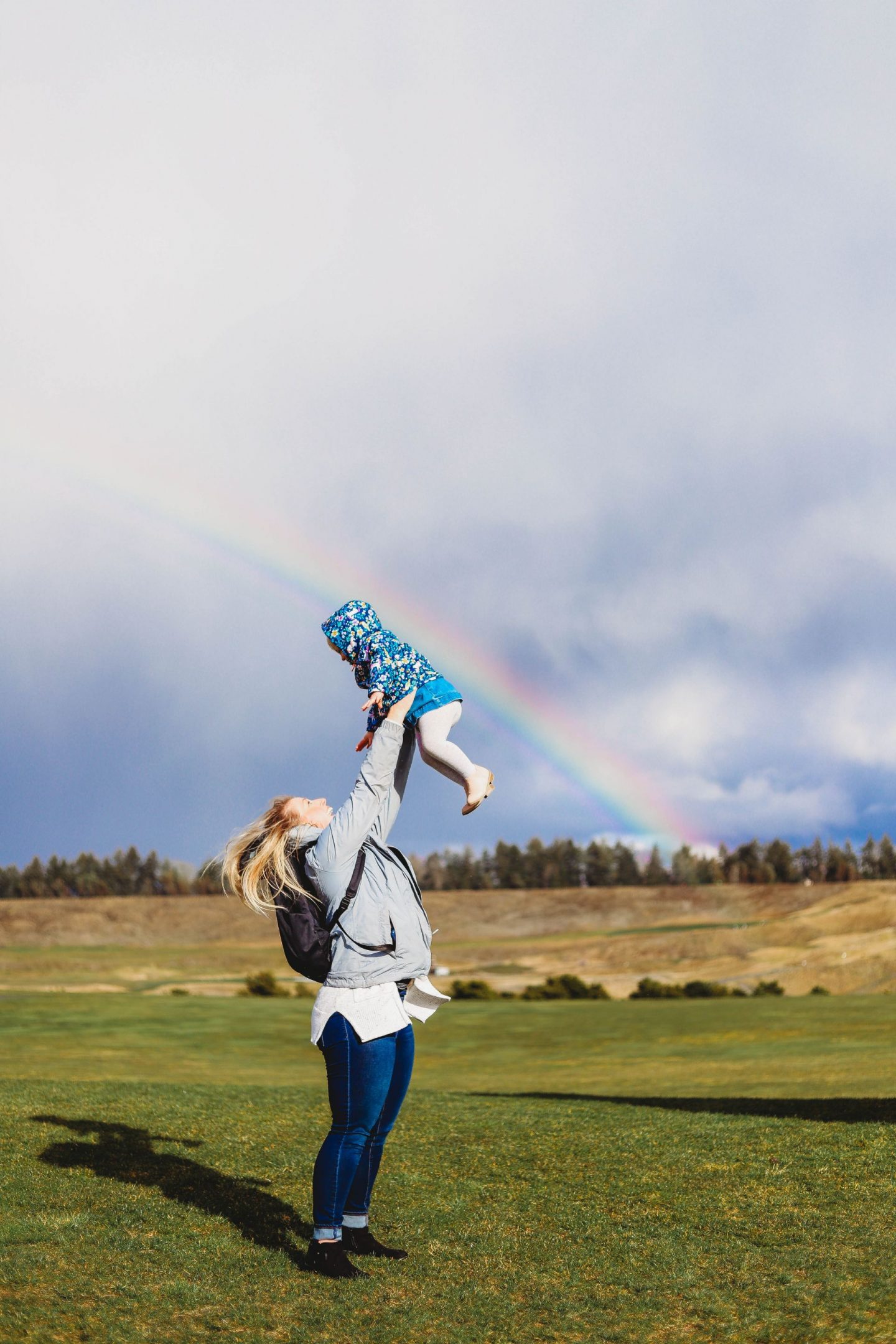 How to Find the Chambers Bay Relics

Chambers Bay Loop is actually comprised of three separate trails – Grandview Trail, Soundview Trail, and the Central Meadow Outer Loop, which offer a full tour of Chambers Bay Park. If you specifically want to see the relics though and hope to avoid the 13% hill grade, drive all the way down to the lower parking lots. While there’s an abundance of parking, it fills up fast.

There are actually a few sections of concrete mining relics, and we explored all three while the kiddos ran, used them as jungle gyms, and we soaked up the intermittent sun (and rainbows!) There’s even a pier where you can train-spot and overlook the water. I’d hazard a guess it’s a great picnic spot, too, and I definitely foresee that happening before our time here is done!