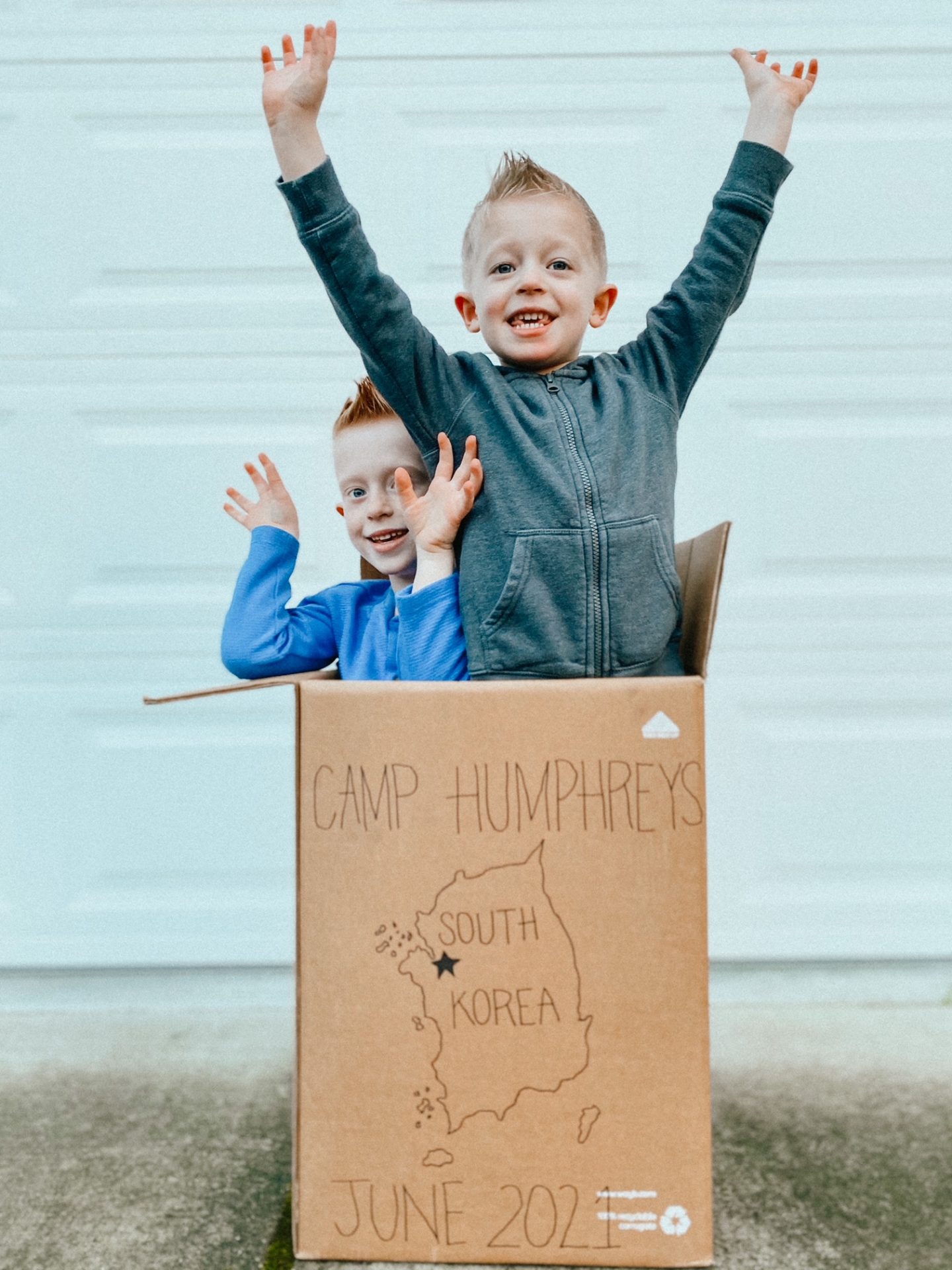 A lot of people have been asking us how we’re doing with the PCS process for our upcoming move to South Korea, and rather than do 12098301982 posts about the same things, I thought I’d talk a little bit about navigating the OCONUS PCS process, what that looks like, what it entails, and where we are in the process. In reality, no PCS is exactly the same, and OCONUS PCSs are a different kind of craziness, but we’re slowly but surely checking the boxes. So, what does the Korea PCS process look like for us?

Our OCONUS PCS to South Korea

Our PCS – or military move – process began with Ryan’s RFO, or his his Request for Orders. Basically, this was a notification of his projected assignment, the report date, tour length, etc. From there, he received hard orders stating his 24-month assignment and the option for an extra year. It stated that this PCS is an accompanied tour, which means that dependents (read: myself and the kids) can go with him, but from there, we need to navigate the actual process of getting command sponsorship.

Getting command sponsorship isn’t cut and dried though. In order to request command sponsorship, we have to go through something called an EFMP screening/interview in which they go through our entire medical and mental health history to ensure that our gaining installation (Camp Humphreys) can support any needs we might have. We started the EFMP process about a month ago, and we finally had our EFMP interview on Monday. Once JBLM submits our paperwork to 8th Army in Korea, they have up to 30 days to let us know whether we have command sponsorship or not. Confused yet? Let me show you what a sample OCONUS PCS planning checklist looks like… 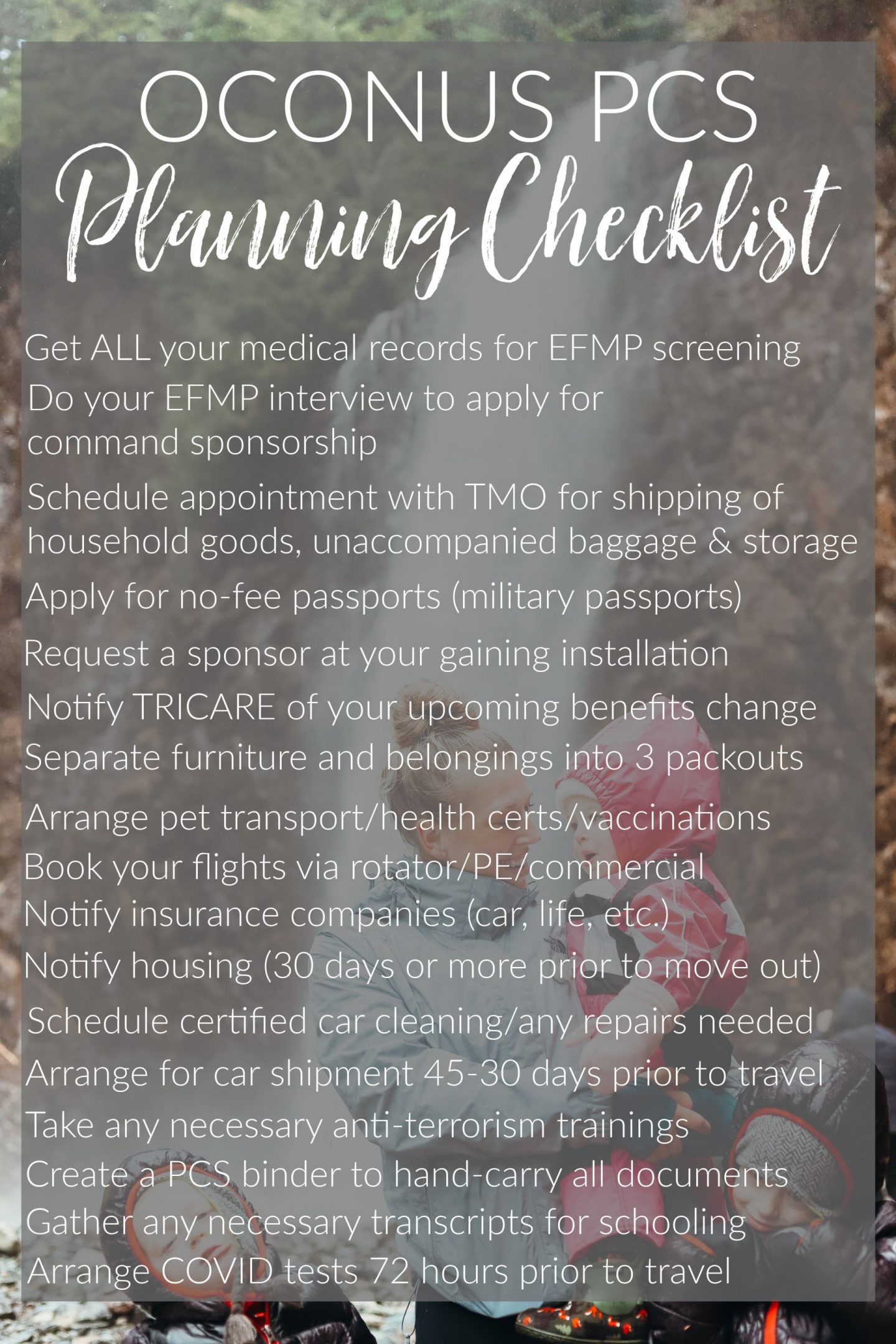 And that’s not all of it. Things pop up, regulations change, and not all of these are in order. Do what you can, but be sure to be adaptable as you go.

How to Prepare for an OCONUS PCS

Honestly, you can prepare for an OCONUS move until you’re blue in the face but, without fail, something will throw a wrench into the equation at some point. For example, we provided our paperwork to our EFMP case coordinator not once, not twice, but thrice, and each time we had more documents that were required, each time delaying our interview. We had to push up Mieke’s surgery – but also get a letter from her surgeon stating she won’t need follow-up care. Ultimately, the best way to prepare for an OCONUS PCS is to be prepared for absolutely everything.

We bought a PCS binder system from List & File, and it’s been my greatest ally through this process so far. I have copies of every medical document, every pet rabies cert, our vehicle registrations, and more in there just so it’s all in one place. It’s separated into different sections health, identity, housing, in transit, etc., all of which are essential parts of the process. Our passports are up to date now so, once we get command sponsorship, which is indicated by amended orders which include all of us by name, we will go for SOFA passports (no-fee passports), which will allow us to claim our host country as our residence for the duration of this tour. 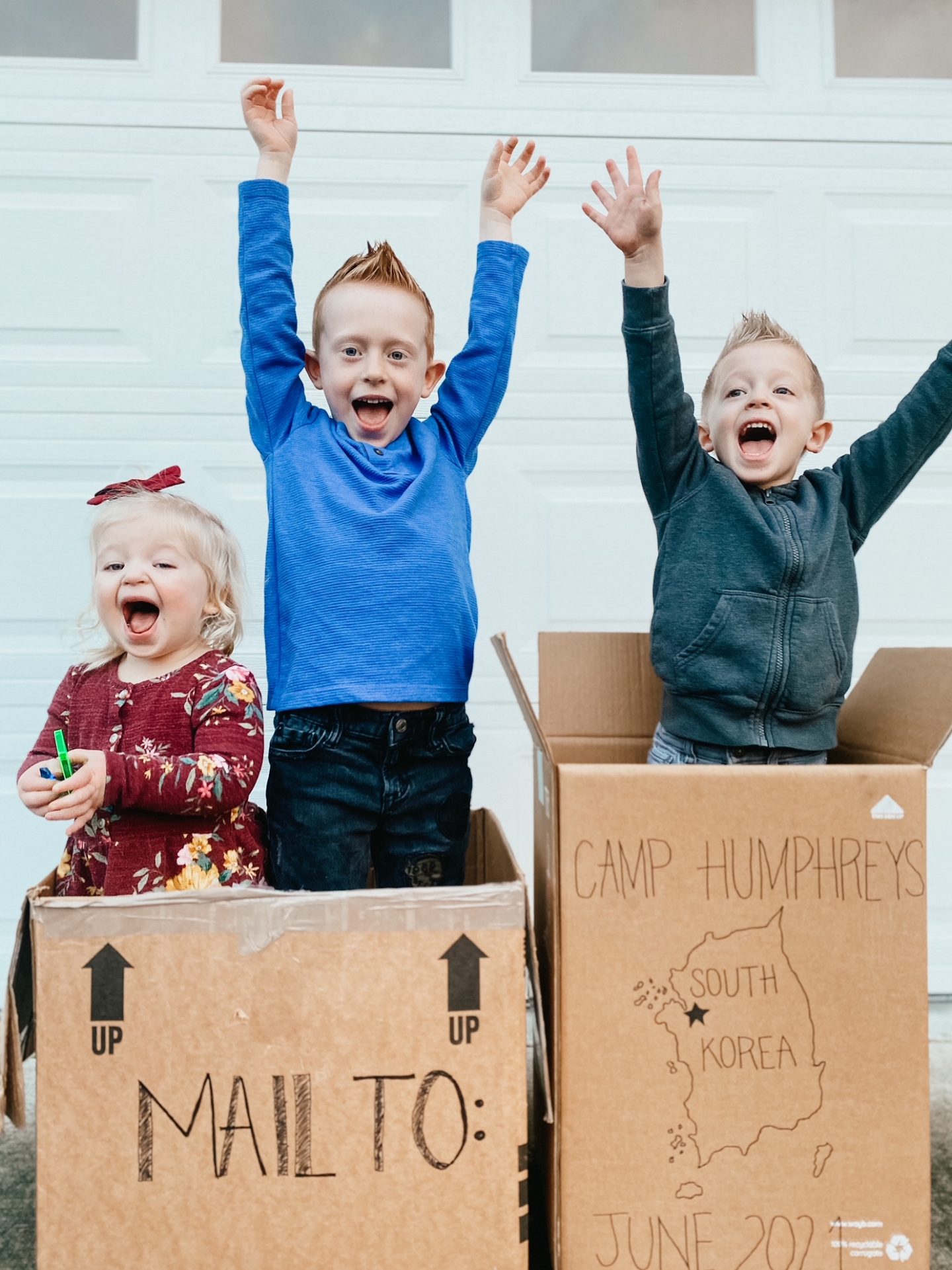 What to Expect with an OCONUS PCS

An OCONUS PCS is pretty much military life in a really (un)neatly packaged powder keg. That hurry up and wait philosophy? Multiply it tenfold. Want to find out if you can actually move overseas? Fill out a million documents, then put your lives – literally – in someone’s hands while they decide whether it’s feasible. It’s exhausting, but it is possible, and it’s important to focus on each little individual task as its own milestone in the PCS process.

Navigating the OCONUS PCS process is chaos, and we’re in the thick of it now, but we know that with each hurdle and hoop we jump over and through, we get one step closer to making it to our new home in Korea. If that’s not worth it, then I don’t know what is!

Tell me – what is the biggest move you’ve ever done?