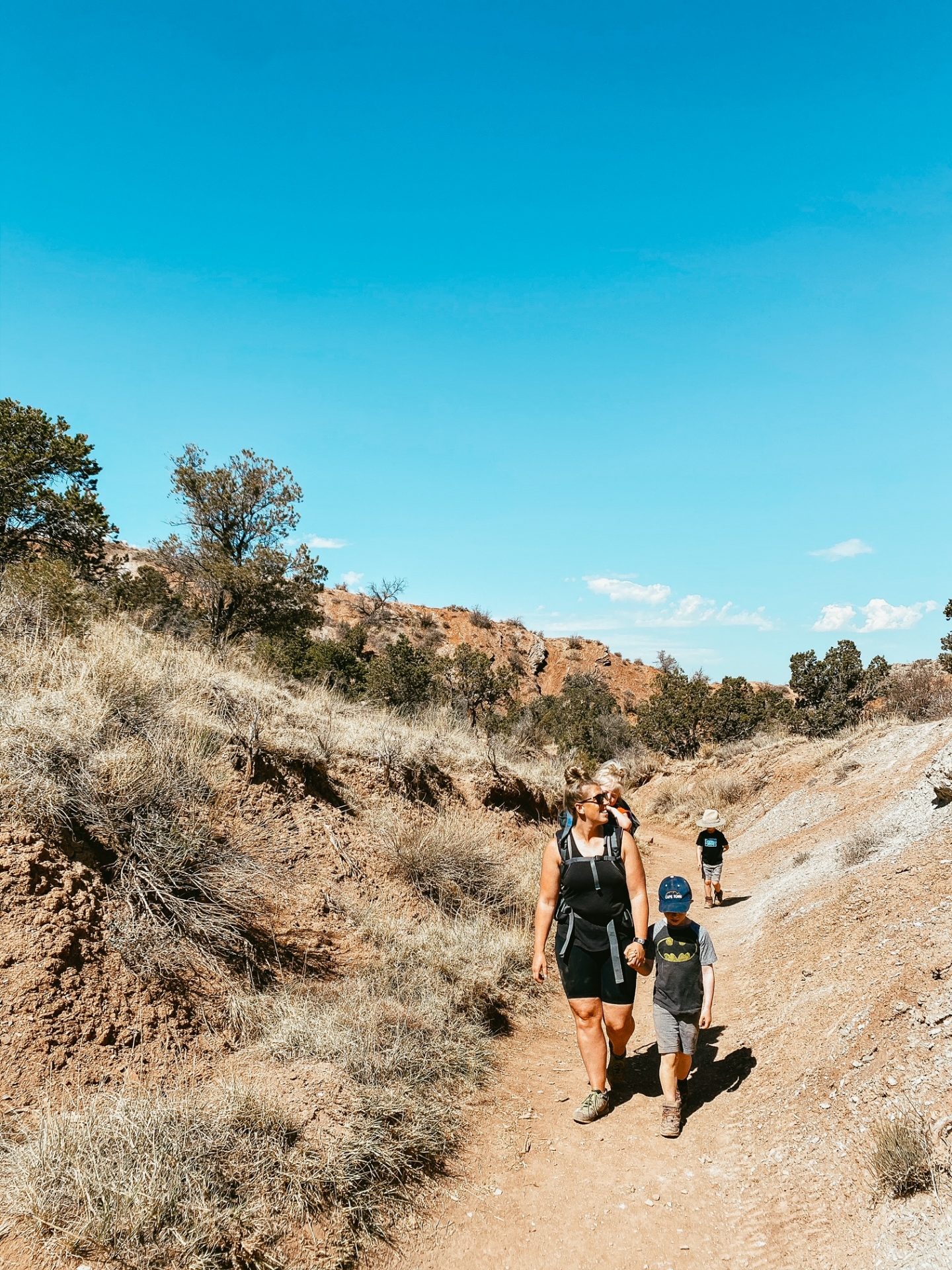 We are officially one week from moving day. I’m losing my mind…completely. The amount of stuff that has to be done in a small window of time, combined with changing protocols for entry on the Korean side has been enough to make my head spin. So, rather than focus on that today, I wanted to share one of our hikes from Utah (before the trip ended up with Mieke in the hospital). My in-laws moved to Cedar City, UT, about a year ago, and its famed red rocks are all nearby. One of the first days there, we visited Red Hollow to explore the slot canyon. Since Mieke was a little wonky and the temperatures wear soaring close to 100 degrees, we decided to stay closer to their home the second day, heading to Rainbow Canyon and Petroglyph Cave, which is just 10 minutes from their home in Cedar City.

We chose Rainbow Canyon and Petroglyph Cave for two main reasons. First, it’s a shorter hike, and with high temperatures and unaccustomed hikers, we knew we had to play it a little safer and more guarded. Two, we were waffling with the idea of whether or not Mieke needed to head down in elevation, so we didn’t want to actually really increase our elevation while deciding. Rainbow Canyon is famed for its rock art, and has frequently played host to different archaeological teams. Today, the trail is clear though and, for a relatively short output of effort, you get a huge payoff. 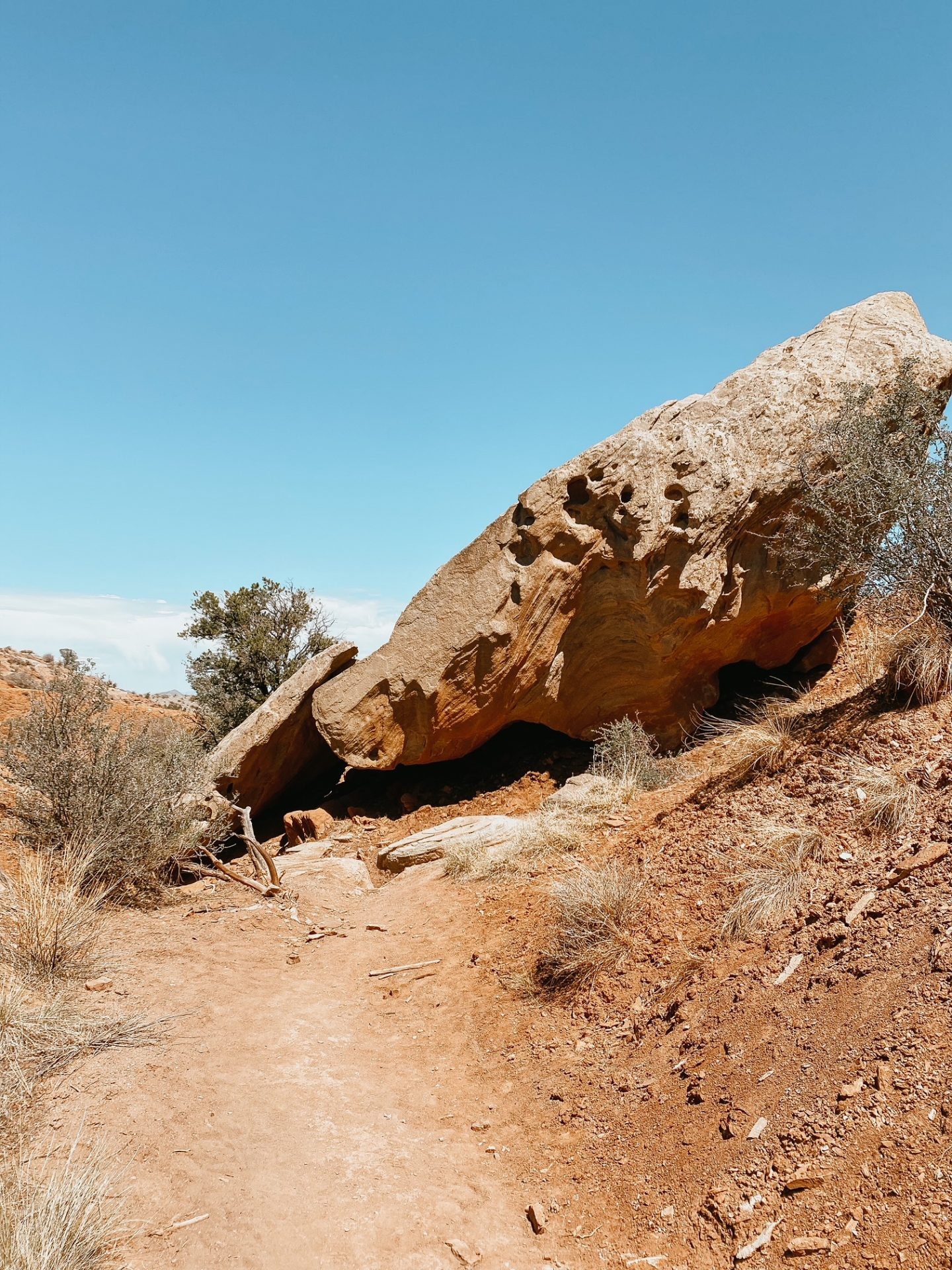 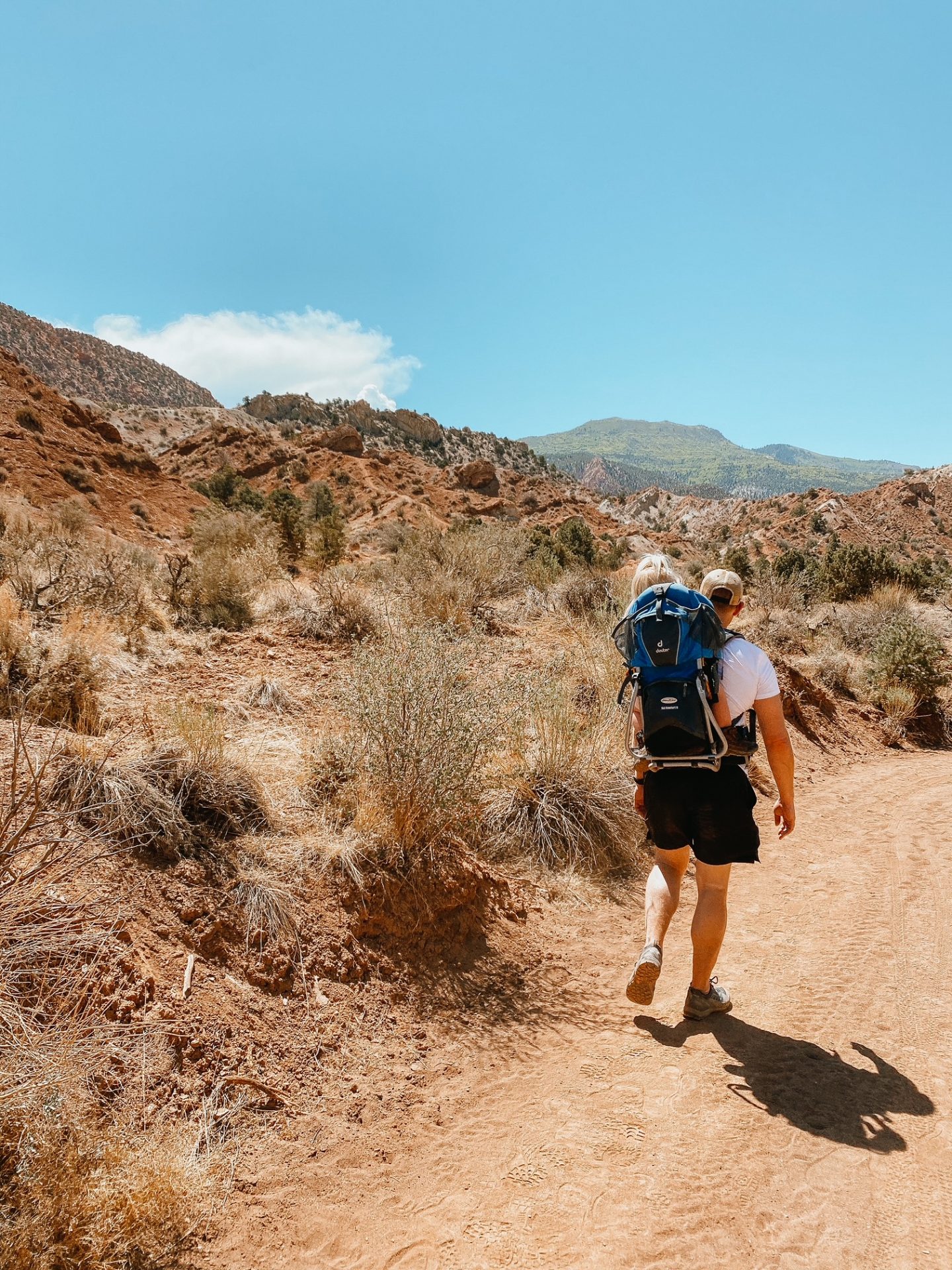 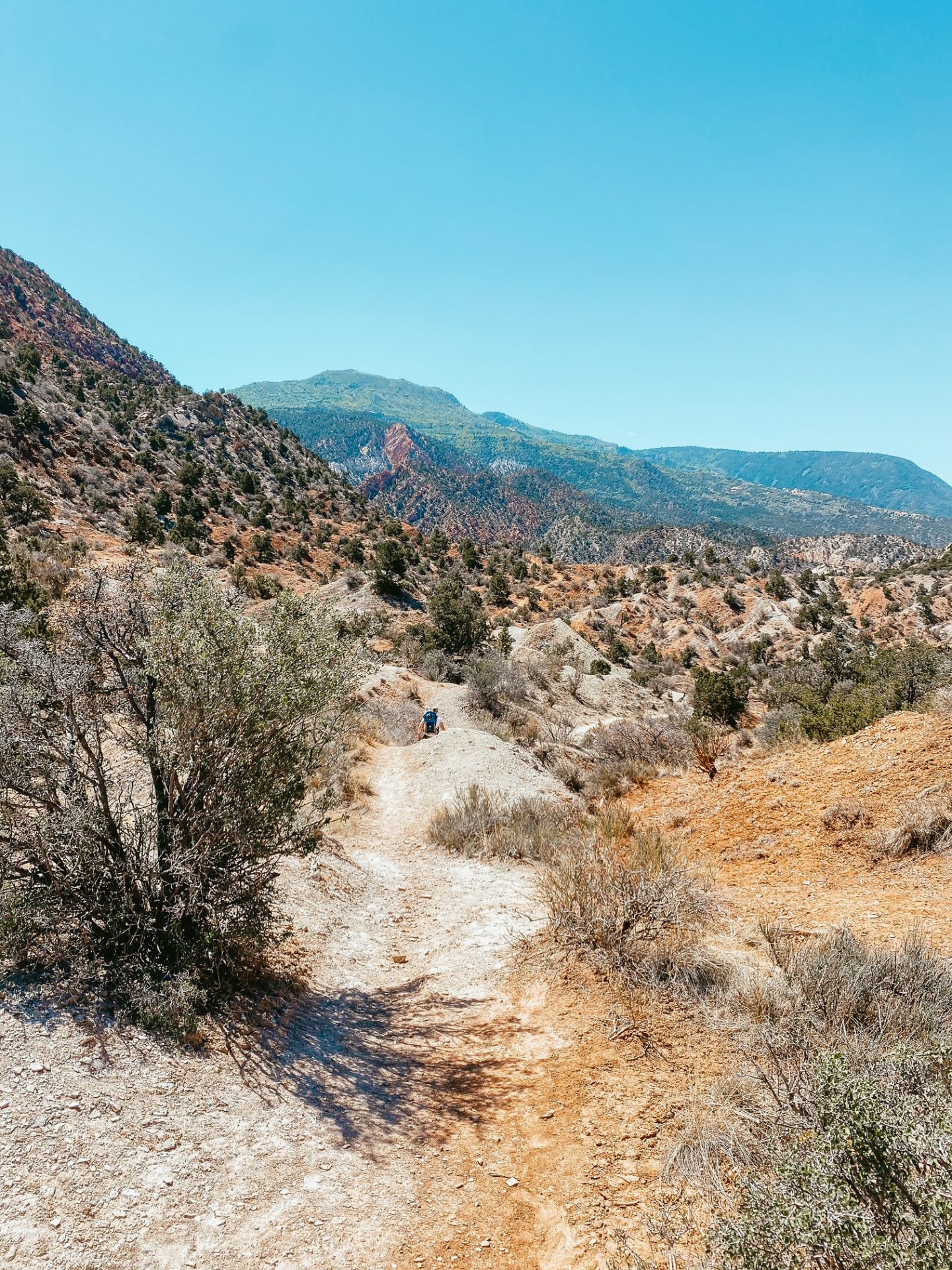 The hike, itself, wasn’t very hard, but the fact that we’re unaccustomed to shifting sand on our hikes definitely added a bit of a layer of effort. The trailhead, though easy to find, is often frequented by ATV and off-road bikers though, so there are a number of winding paths and trails that will eventually lead up to the base of the rock wall, which then leads to Petroglyph Cave. By following the main trail straight down, curving to the right, and then hooking back to the left, we reached the base of the rock wall in about 35 minutes.

Rainbow Canyon was hot though, and the combined heat and relatively high elevation for these Washingtonians was a lot though. We made it to the base of the rock wall, and Mieke threw up all over me in the Deuter. Unfortunately, she wasn’t as healthy as we’d though she was, so Ryan stayed at the bottom with the Mieke to clean her and hydrate her, and the boys and I scrambled our way to the top. There are two overhangs. After inspecting the first, we saw that there were no petroglyphs, so we scrambled up another 6-8 feet and found the narrow cave entrance. 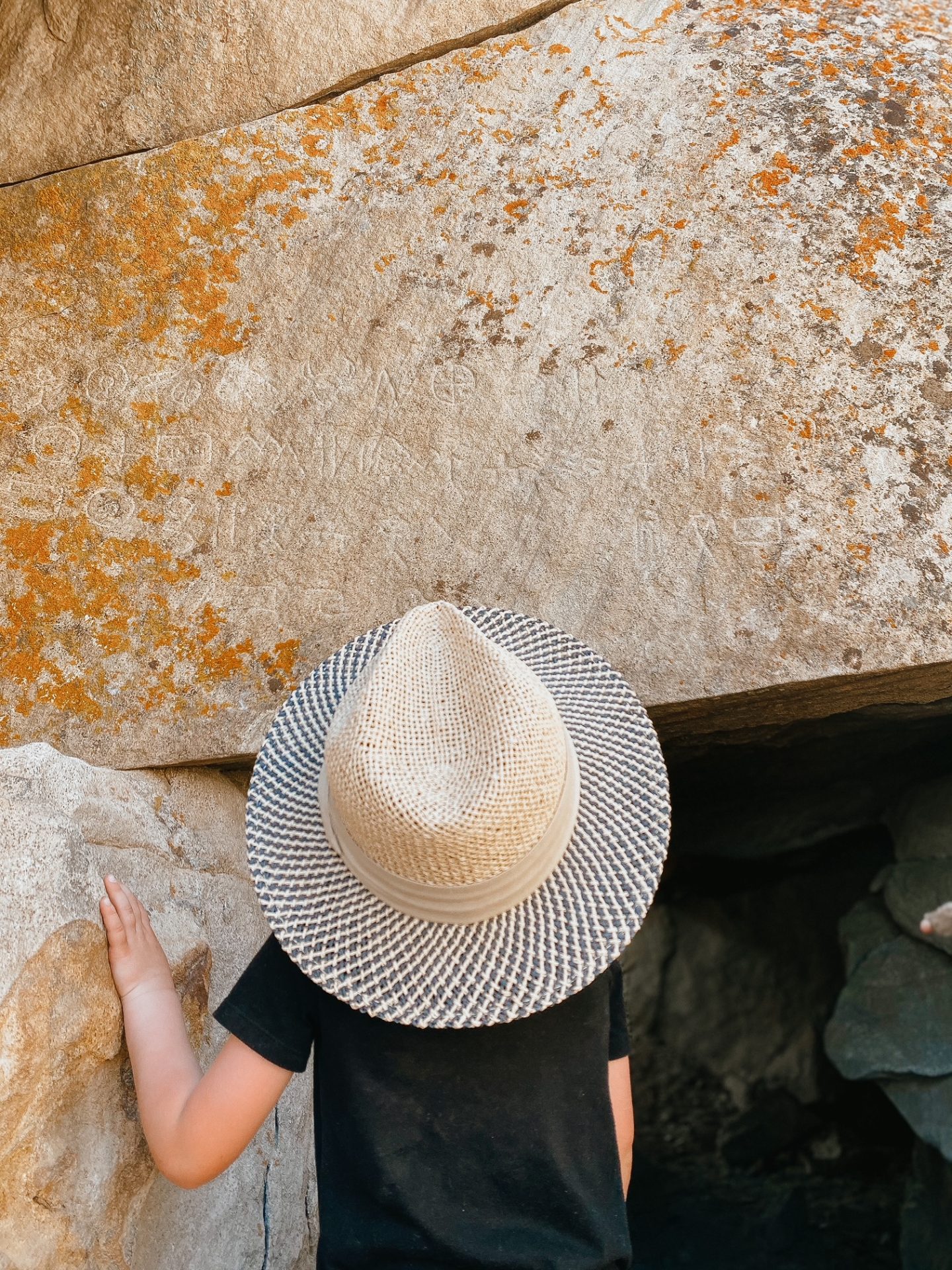 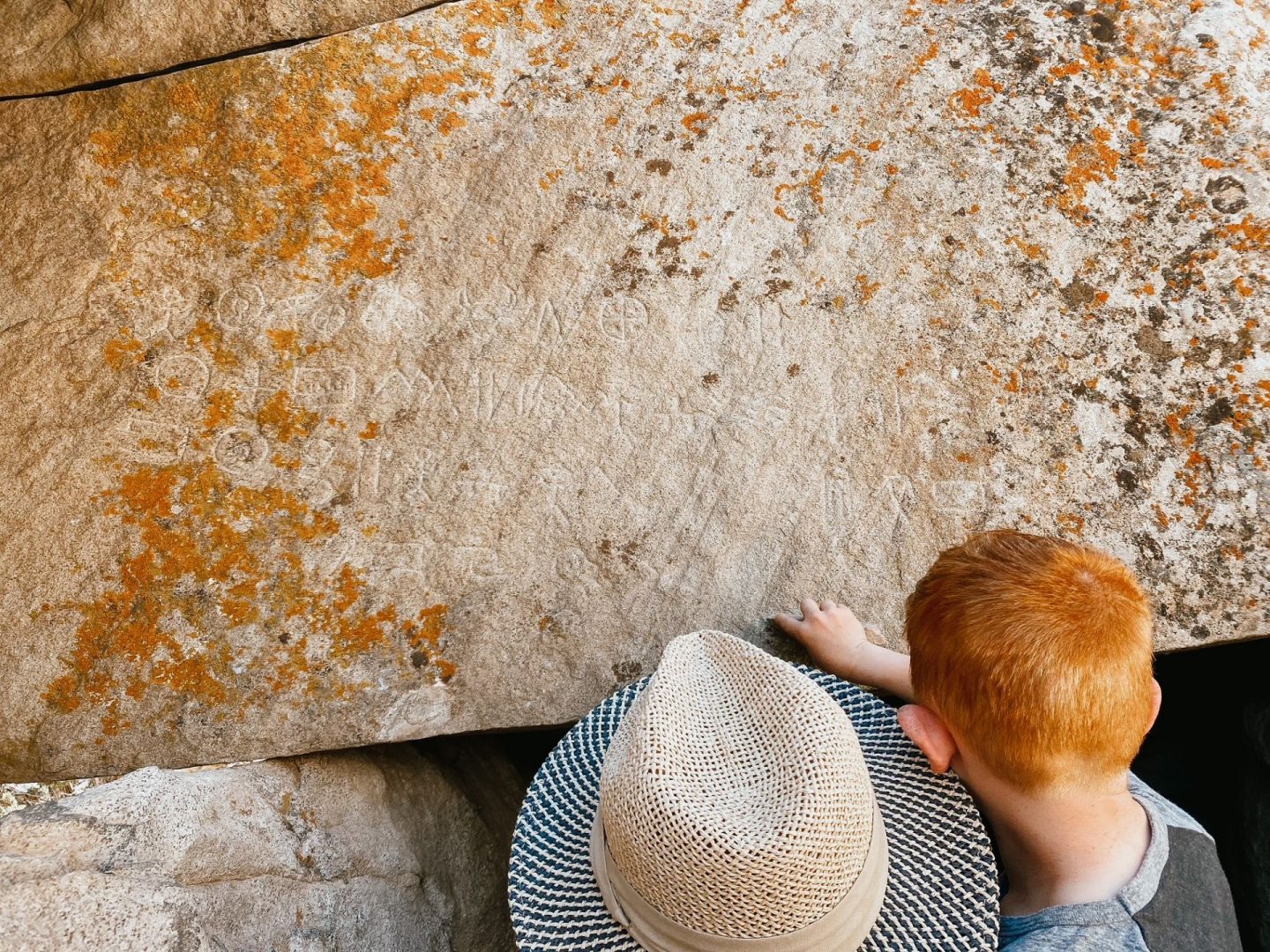 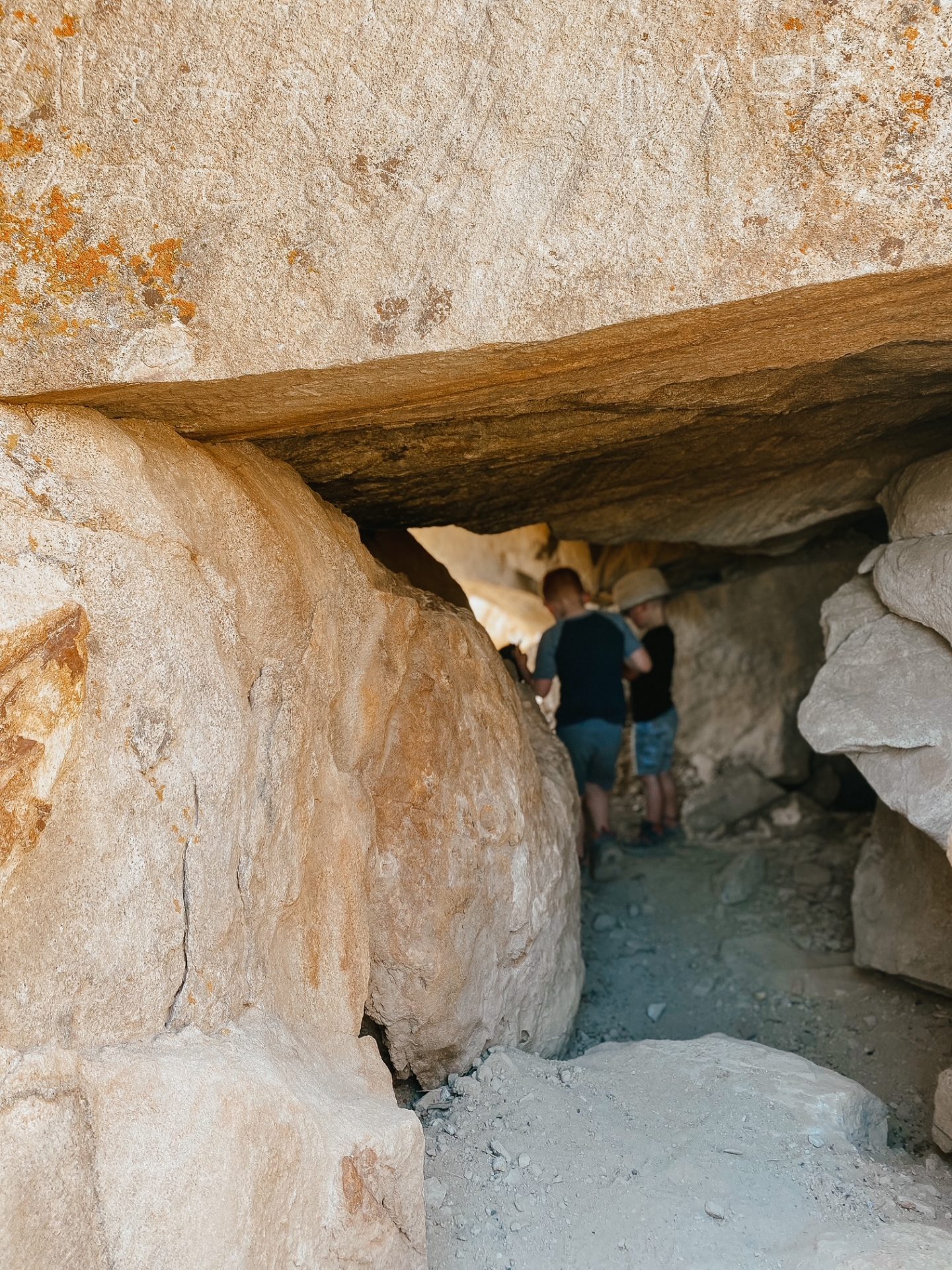 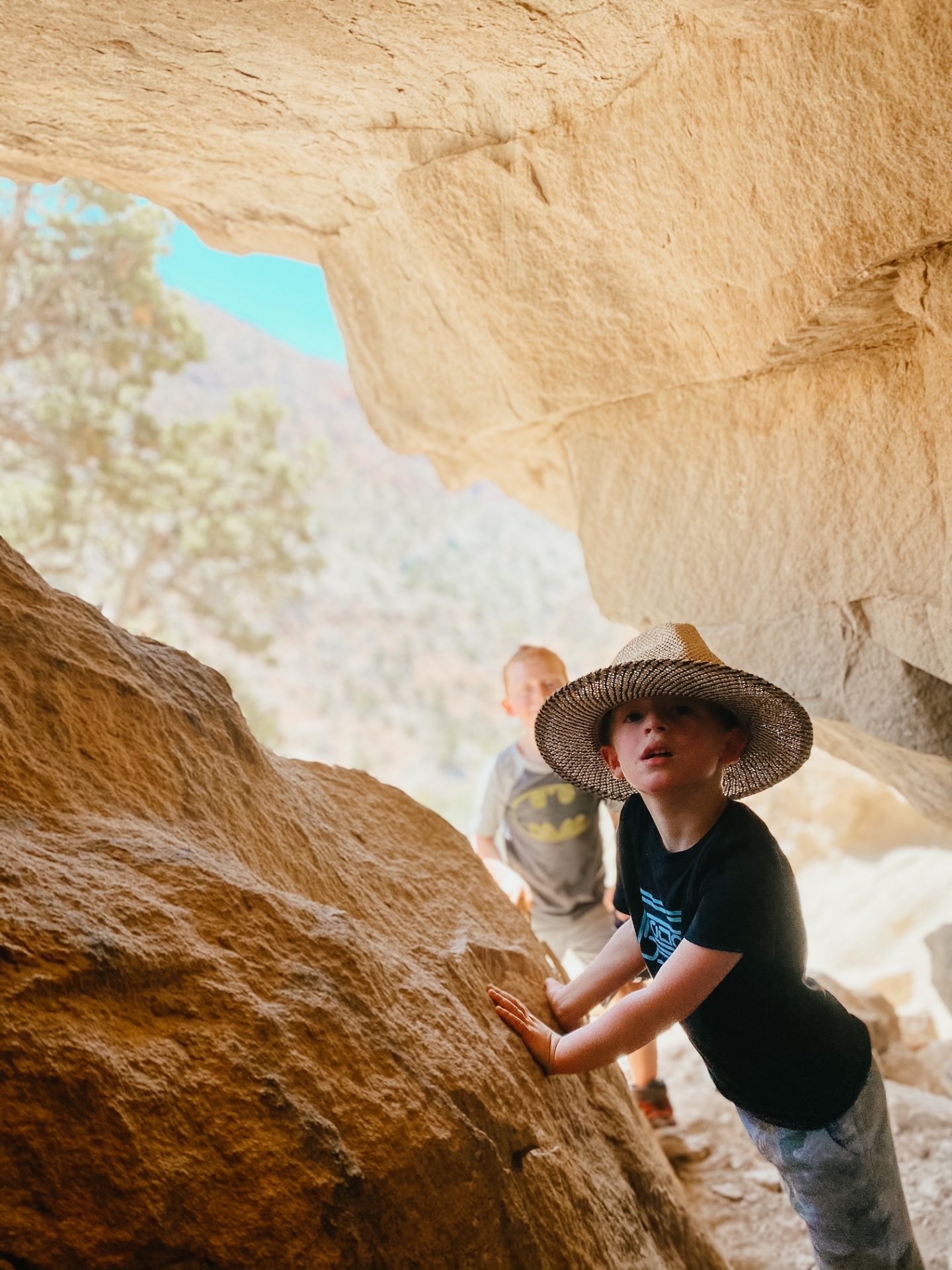 On the far side of the cave, the petroglyphs are there; barely legible, but also very apparent. The boys were pretty stoked and had all the questions (I had none of the answers), but staring out from Petroglyph Cave over Rainbow Canyon was a view I won’t soon forget. I’m glad that, even though Mieke was sick and our trip ended shortly thereafter, we managed to do this hike because it was worth it!

Trail Length: AllTrails clocks this one in at 1.4 miles roundtrip (unless you get a little turned around like us)

Level of Difficulty: This is rated moderate, though I’d say the heat is what made it moderate for us. The hike, itself, is pretty easy if you’re familiar with heat, and you’re used to the terrain.

Tips: Hydrate and pack extra water! Though short, this is a hot hike, and there is very little shade as you make your way through Rainbow Canyon. Once you get to Petroglyph Cave, you can cool off in the shade, but that’s about it.