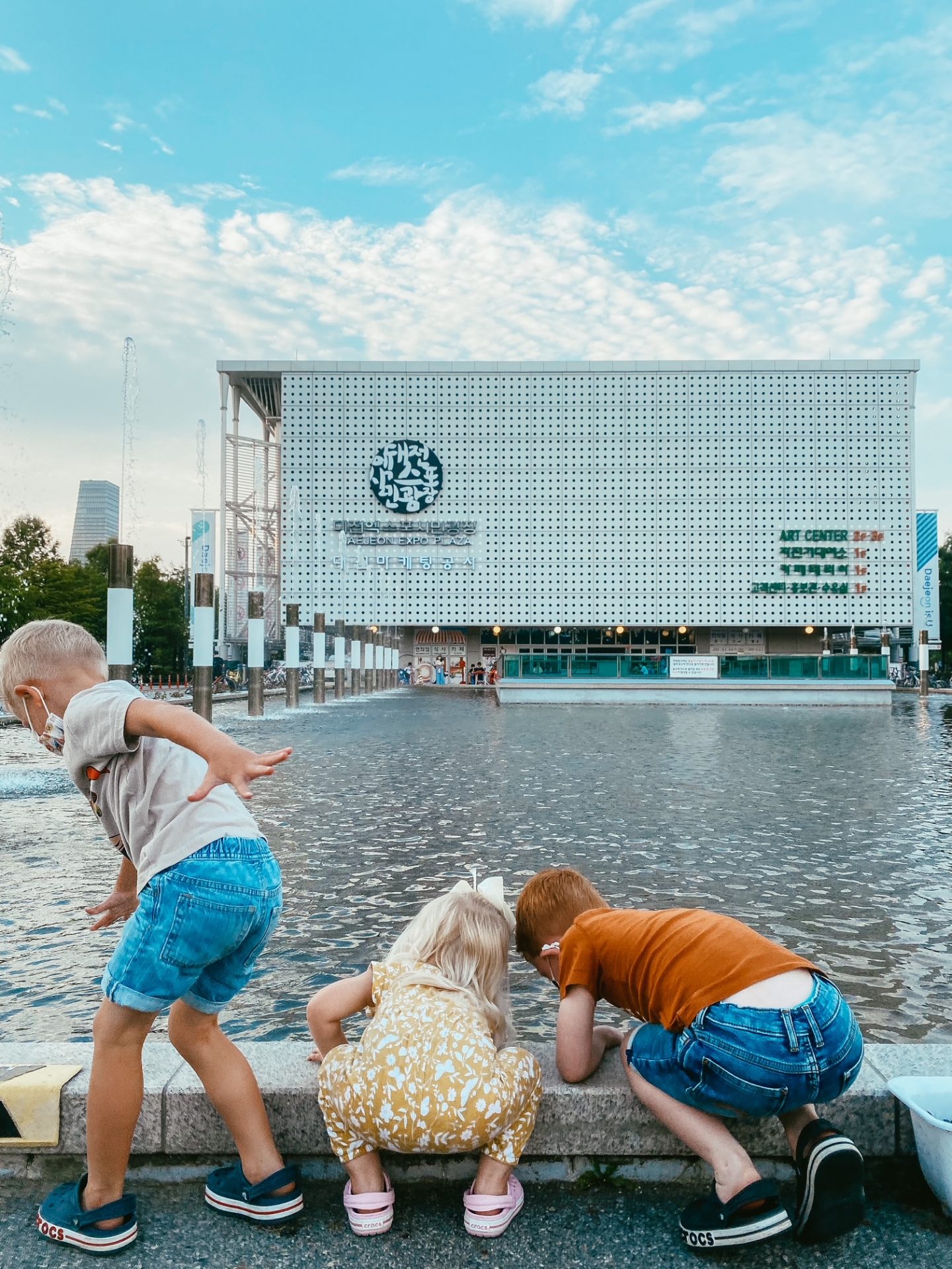 Back when the boys were babies (especially Spencer), we wouldn’t have dreamed of messing up sleep patterns or, God forbid, stayed out past “bedtime.” We used to live by a strict schedule that, in short, kept us on a tight leash and made it impossible to really go, see, or do much with the kids. Thankfully, when Ryan deployed in 2017, I learned that nap times were flexible – as are kids – and we can do what we want while the kids adapt. I knew we wanted to visit the Daejeon Expo Bridge at night and, thankfully, we’ve grown a bit in this parenting journey and made it happen.

While USFK and ROK have us on a pretty tight leash due to COVID restrictions, we were able to visit the city of Daejeon before it was off limits, and visiting at night was just the ticket. This city was the perfect mix of city and suburbia, and seeing it lit up night was honestly magnificent.

While Pyeongtaek (where we live) is a veritable flatland of farms and small cities like Sosabeol, Daejeon is a bustling city. The Daejeon Expo Plaza draws hundreds, if not thousands, of visitors each week with one of its main highlights being the Daejeon Expo Bridge. Built for the 1993 World Expo, the eponymous Expo Bridge and Hanbit Tower light up at night becoming a spectacle in their own right.

Daejeon Expo Plaza has also evolved from its original purpose turning into a year-round and also seasonal attraction. The plaza is accentuated by an impressive water feature, surrounding bike track for which you can rent bikes or bring your own to ride leisurely around the plaza. The central area beyond the stage transforms into an ice rink in the winter, and people picnic throughout the grounds. There is also a cafe and petite shop to buy snacks and meals for the duration of your stay. 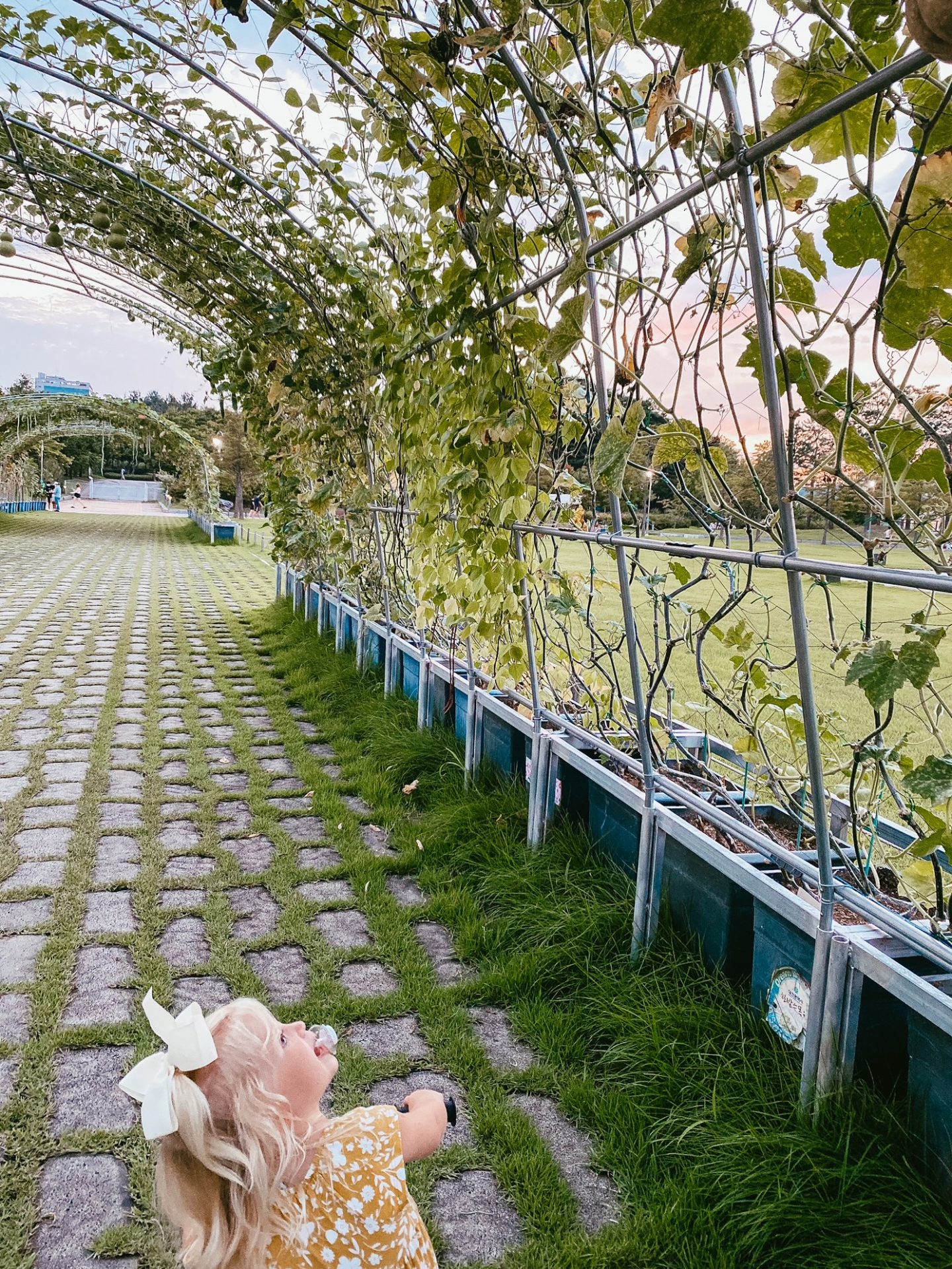 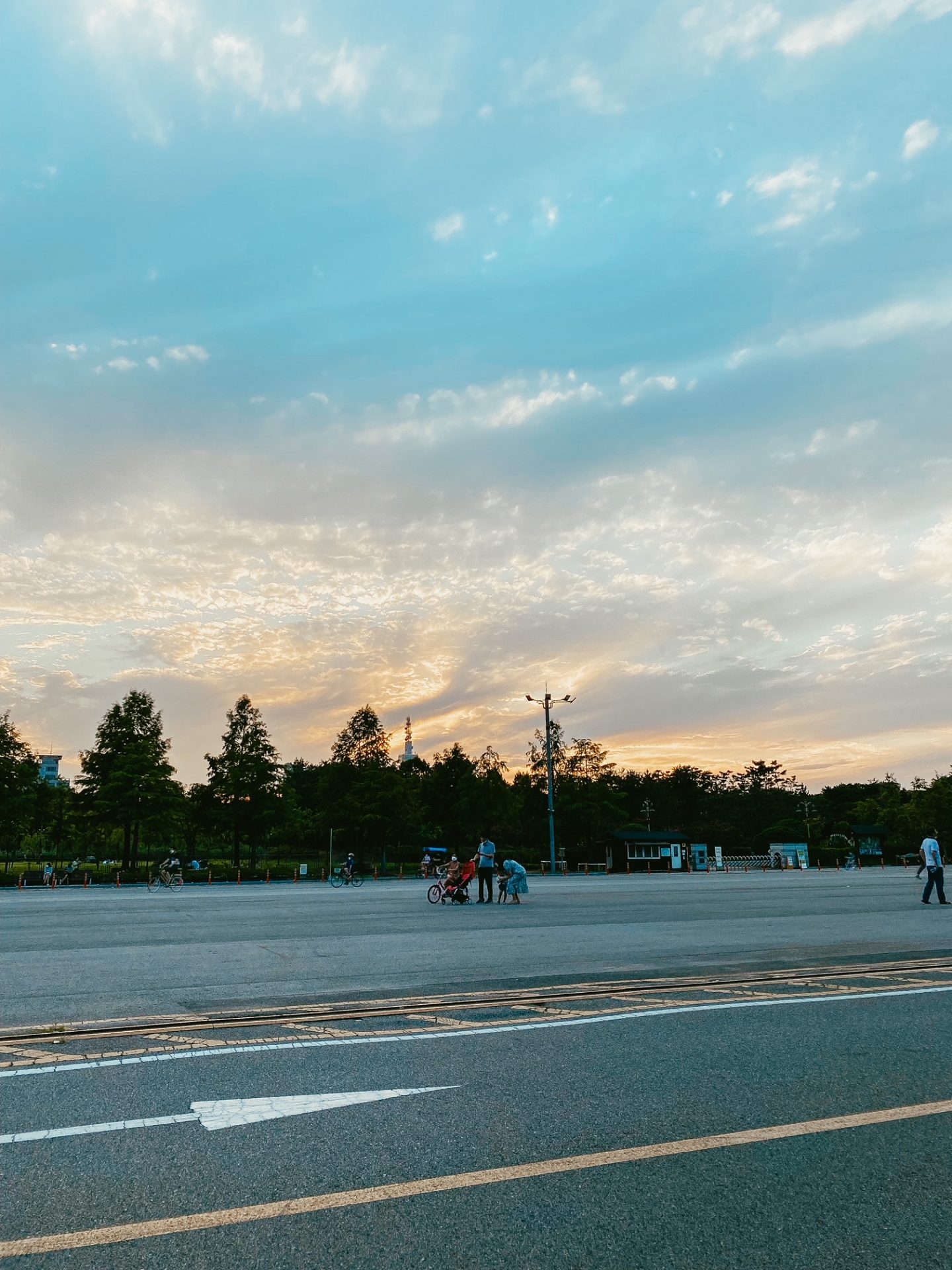 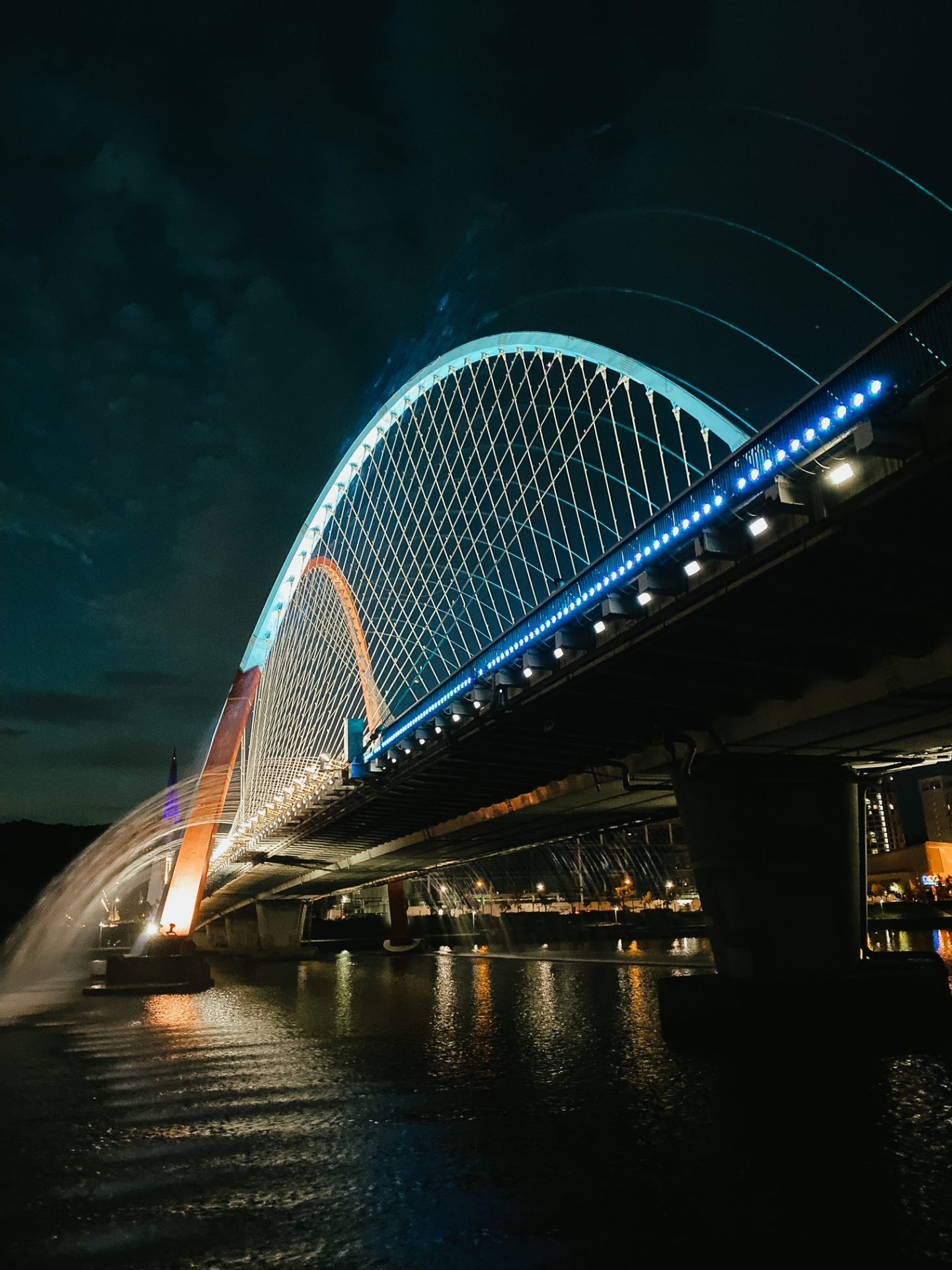 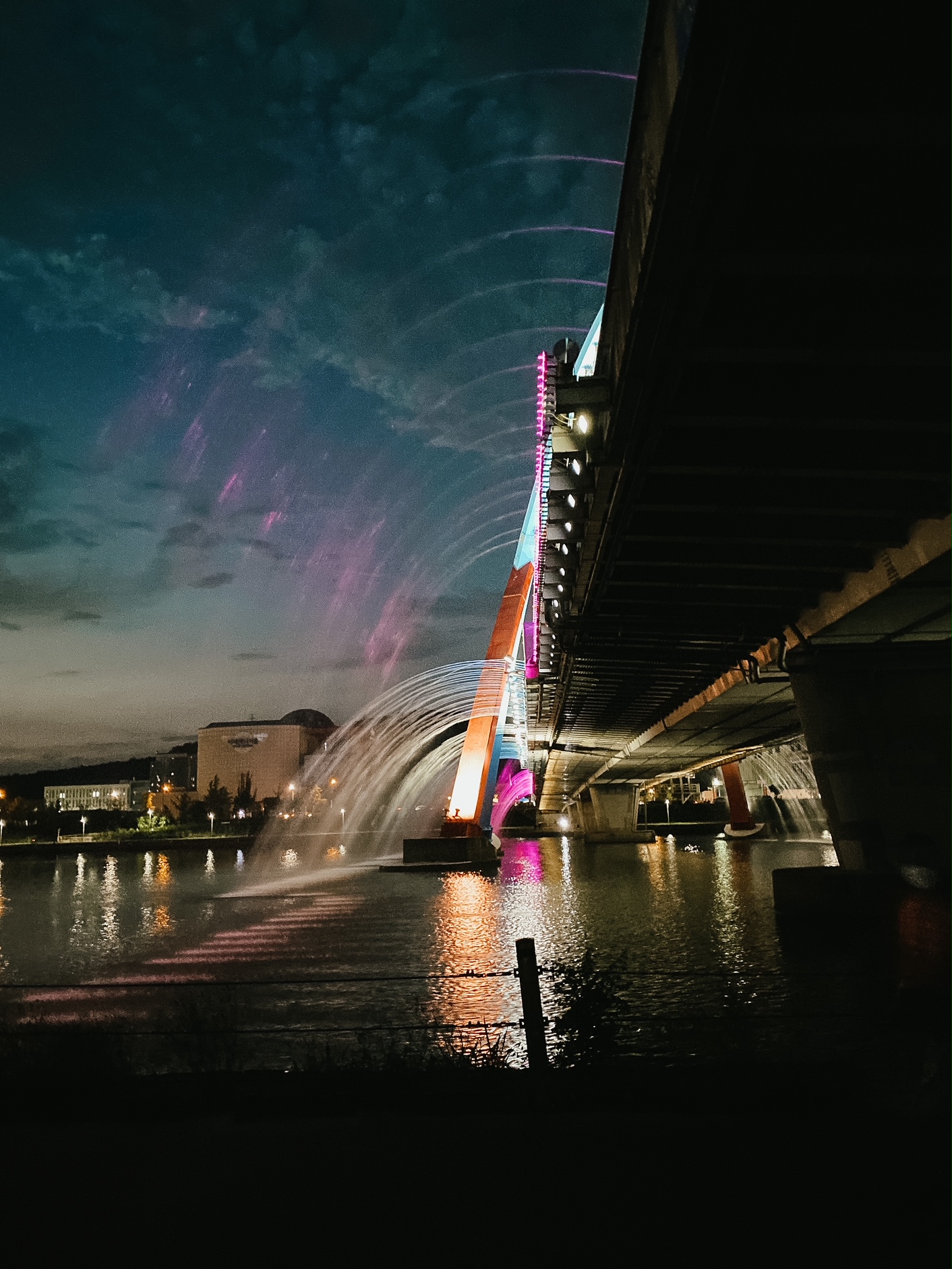 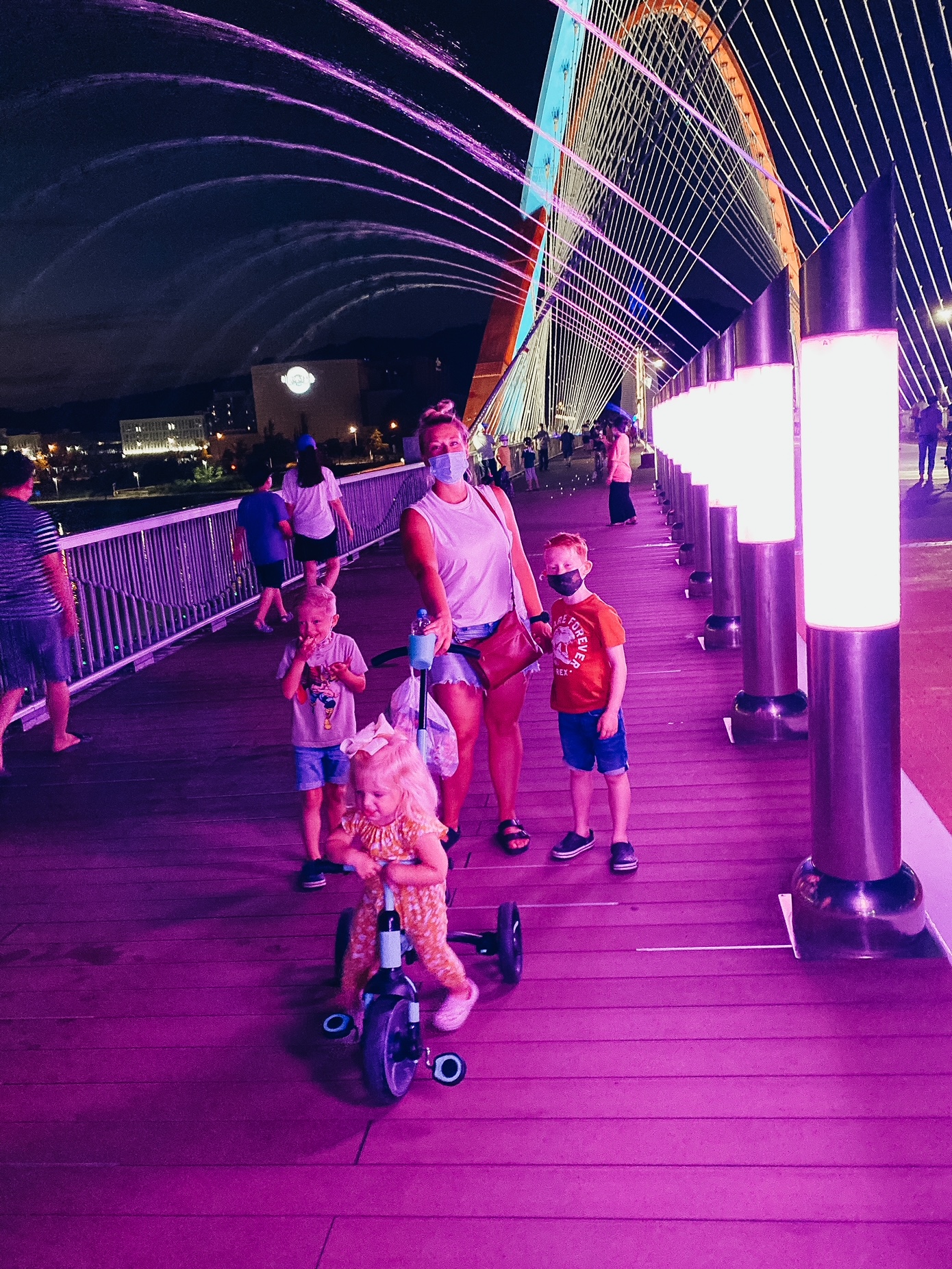 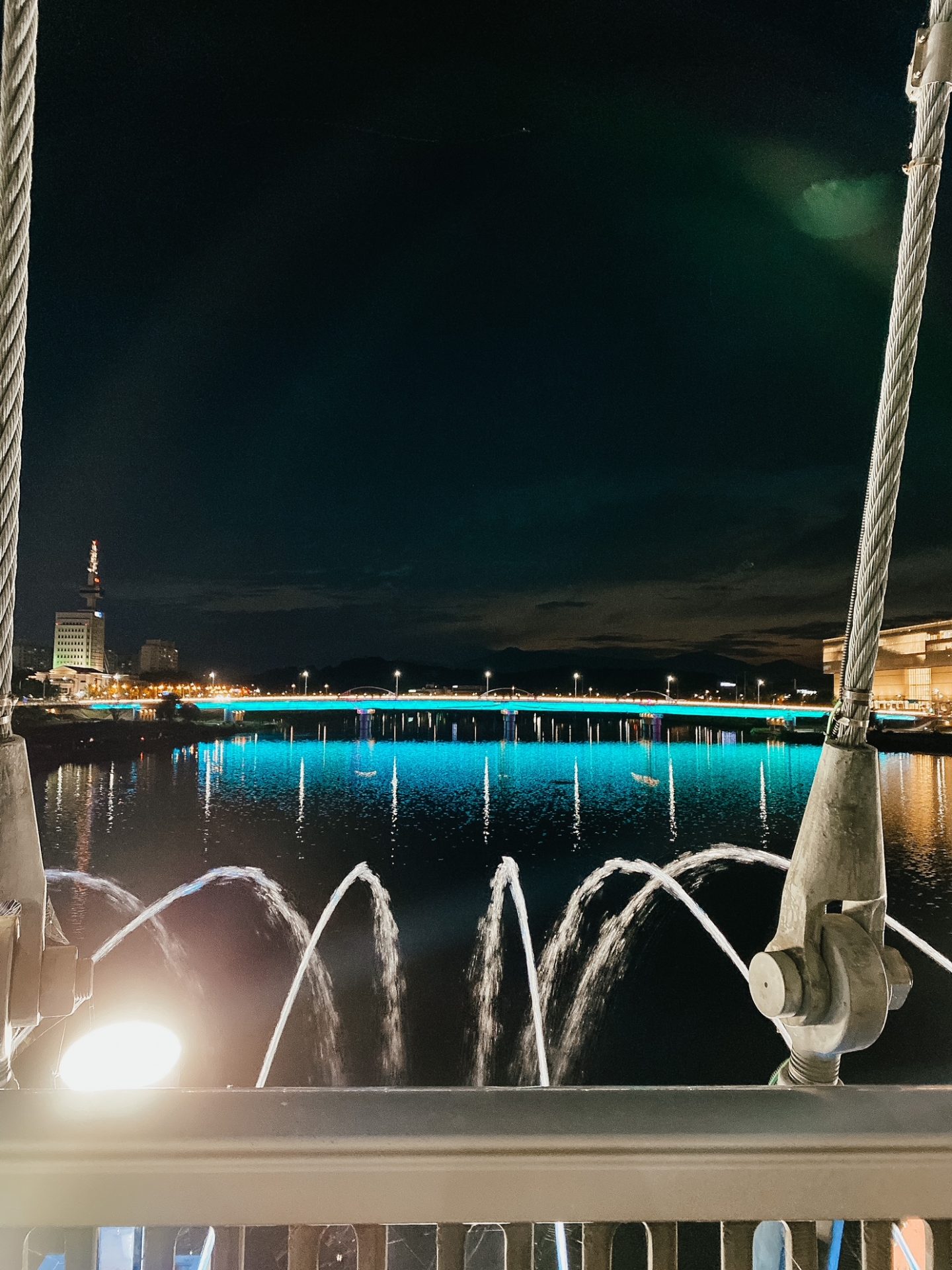 Is the Daejeon Expo Bridge Free?

You don’t need money to visit the Daejeon Expo Bridge or Plaza, which was definitely a draw for us! We obviously brought cash to purchase a meal and snacks, and we found a little ice cream vendor right at the entrance of the bridge. We treated the kids to a cone each, and we followed the walking path beneath the bridge, watching the sun set all around us and seeing the red and blue bridge transform from a gaudy daytime structure into a beautiful nighttime attraction.

While it looks cool during the day, it turns into something truly spectacular at night. From the changing colors to the water features that shoot from the top of the bridge down to the water below, the Daejeon Expo Bridge is a sight to see at night, and it’s no wonder photographers camp out below to take their nighttime photos.

We weren’t sure whether the kids would enjoy it but, surprisingly, we all loved visiting the Daejeon Expo Bridge at night. It was a fun, free, and totally mesmerizing experience we won’t soon forget. Best of all, it’s just over an hour and a half from Sosabeol and about two hours from Camp Humphreys.

Tell me – have you ever heard of the Daejeon Expo Bridge?