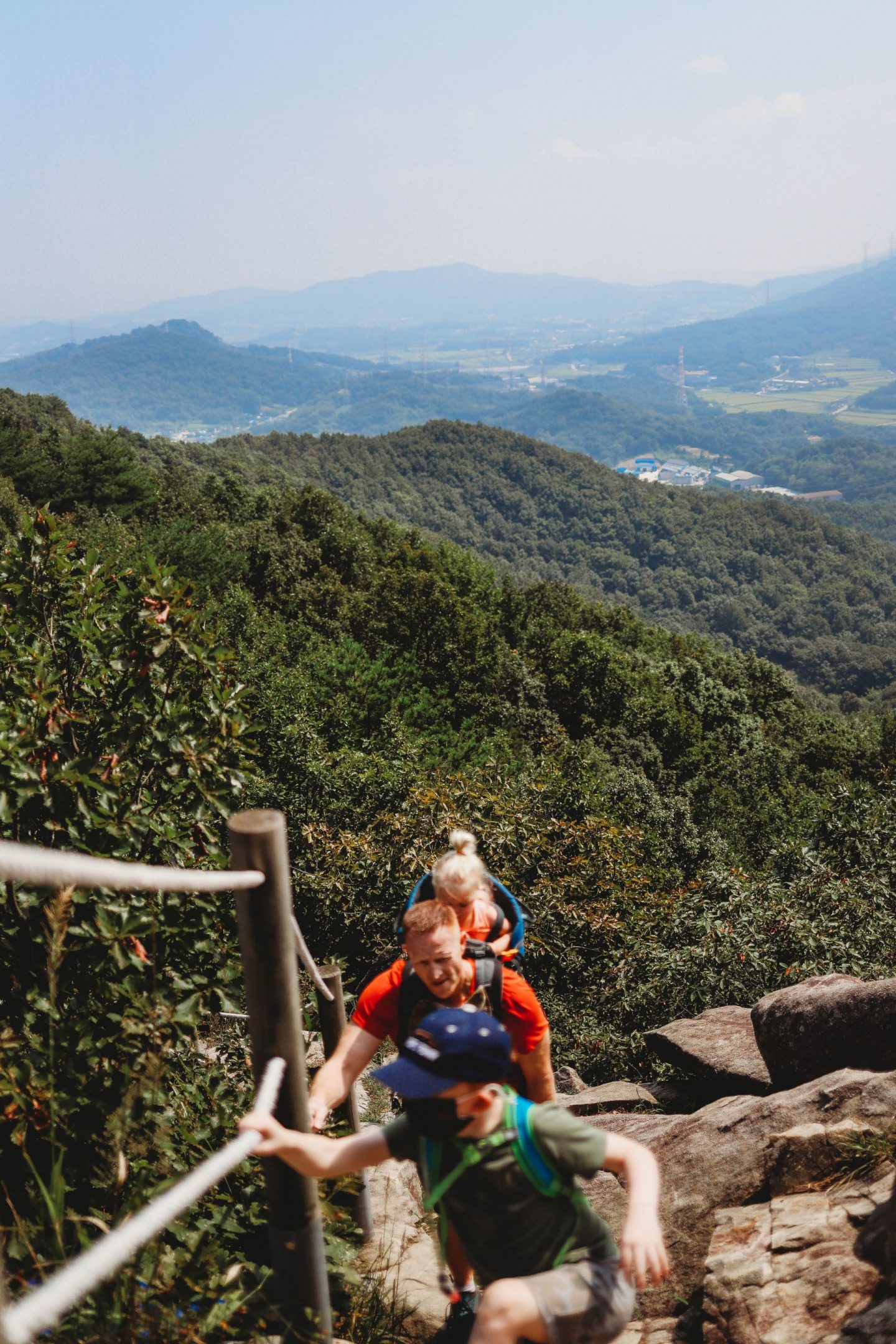 I feel the most grounded in this new adventure when I literally ground myself in the mountains or on the trails. Korea is amazing, and this is the best adventure we’ve been on as a family, but I’d be lying if I said it was easy. I’ve missed the mountains of Washington, and I’ve missed those outdoor days whilst living in the middle of the city. We decided to rectify that and found ourselves hiking Pinnacle Four Trail in Asan – one of the hikes that’s been highest on my bucket list hikes since arriving in country.

When we were stationed in Washington, we hiked almost every weekend, and at least three weekends each month were spent on the trails. Many of the hikes out here are located either far North or far South, but Pyeongtaek is actually the flatland region of South Korea, so hiking out here in the flatlands is less, well, impressive. Pinnacle Four Trail, however, is just 25 minutes from Sosabeol, in a green zone, and is hailed for its moderate-to-hard trail, so we decided to lace up the old hiking boots and get going.

Pinnacle Four actually has several entrances to the trailhead, but we decided to take the most challenging, in large part because that’s where Waze took us, and we didn’t want to chance it. They weren’t lying when they said it was a climb. From the first moment, Pinnacle Four Trail’s steep entrance is steep, and in the 1.2 miles up, we climbed 295 meters above the clouds. 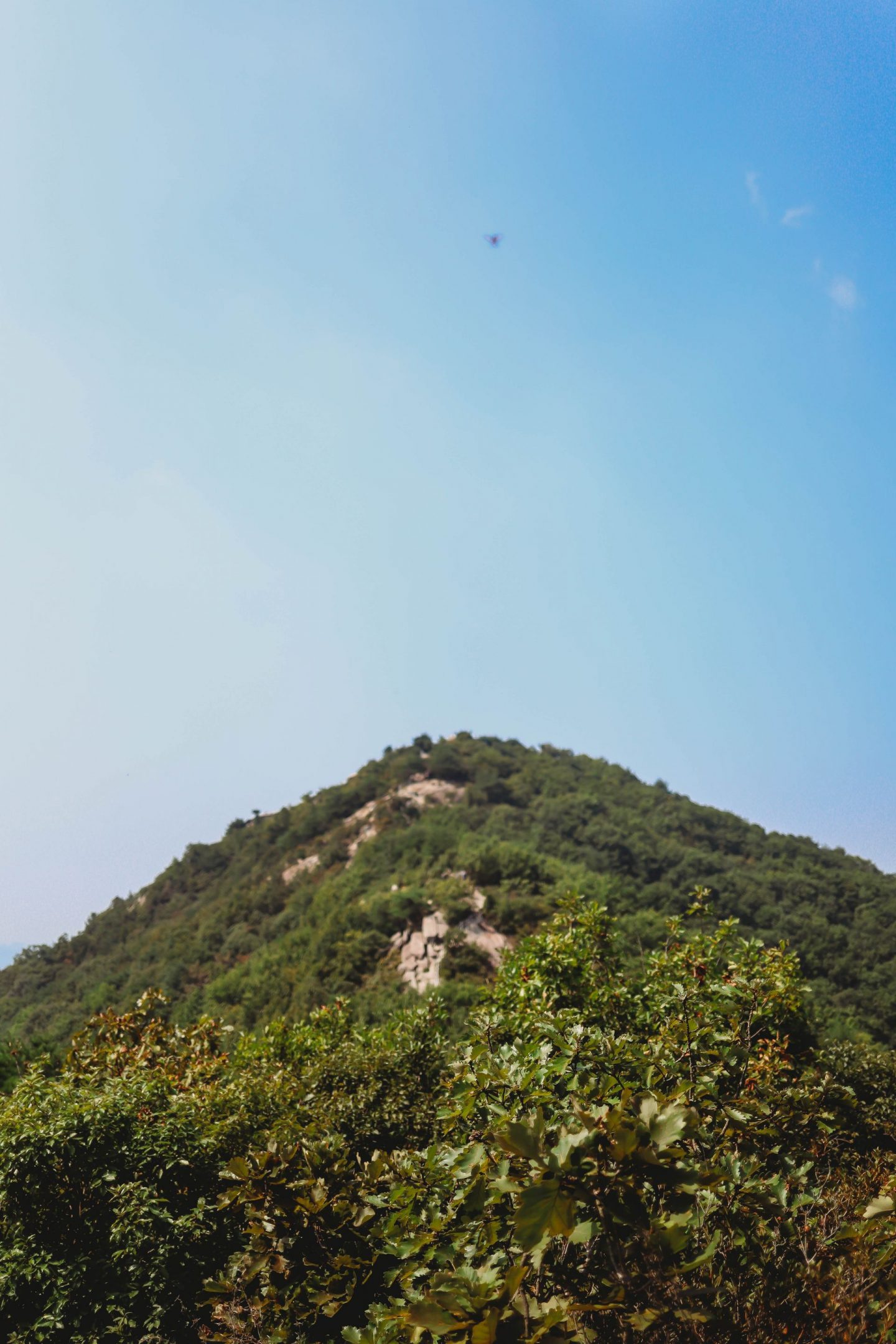 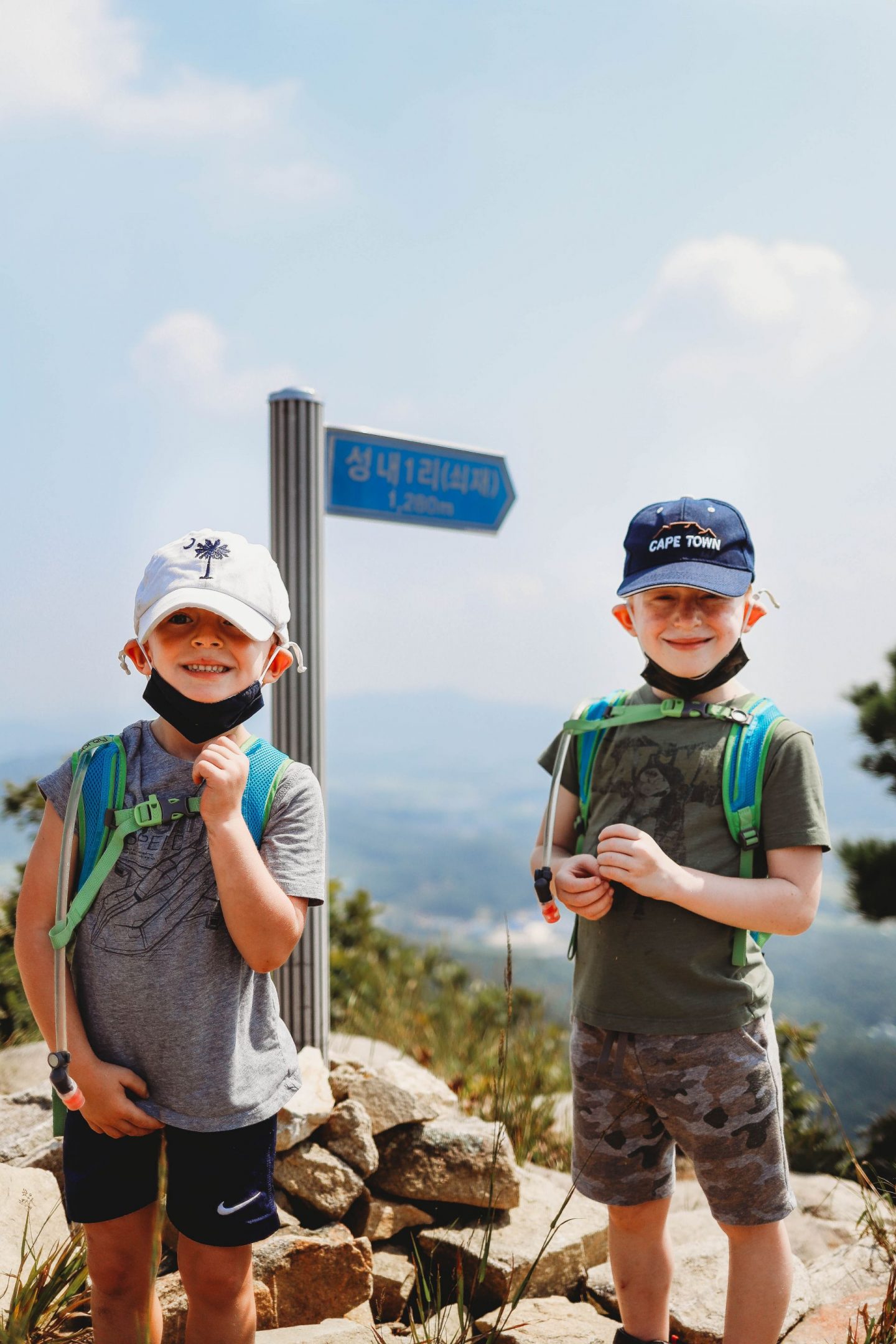 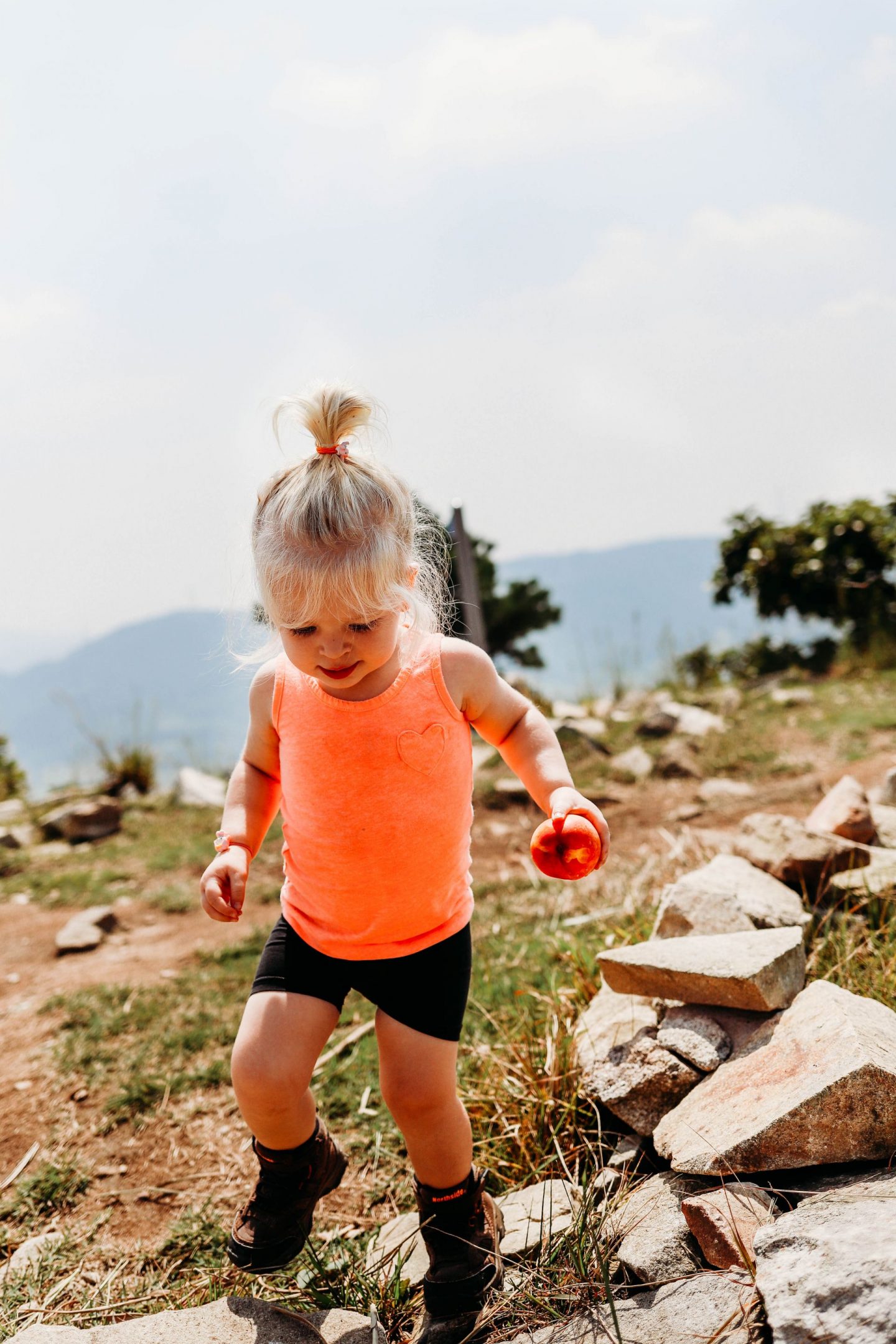 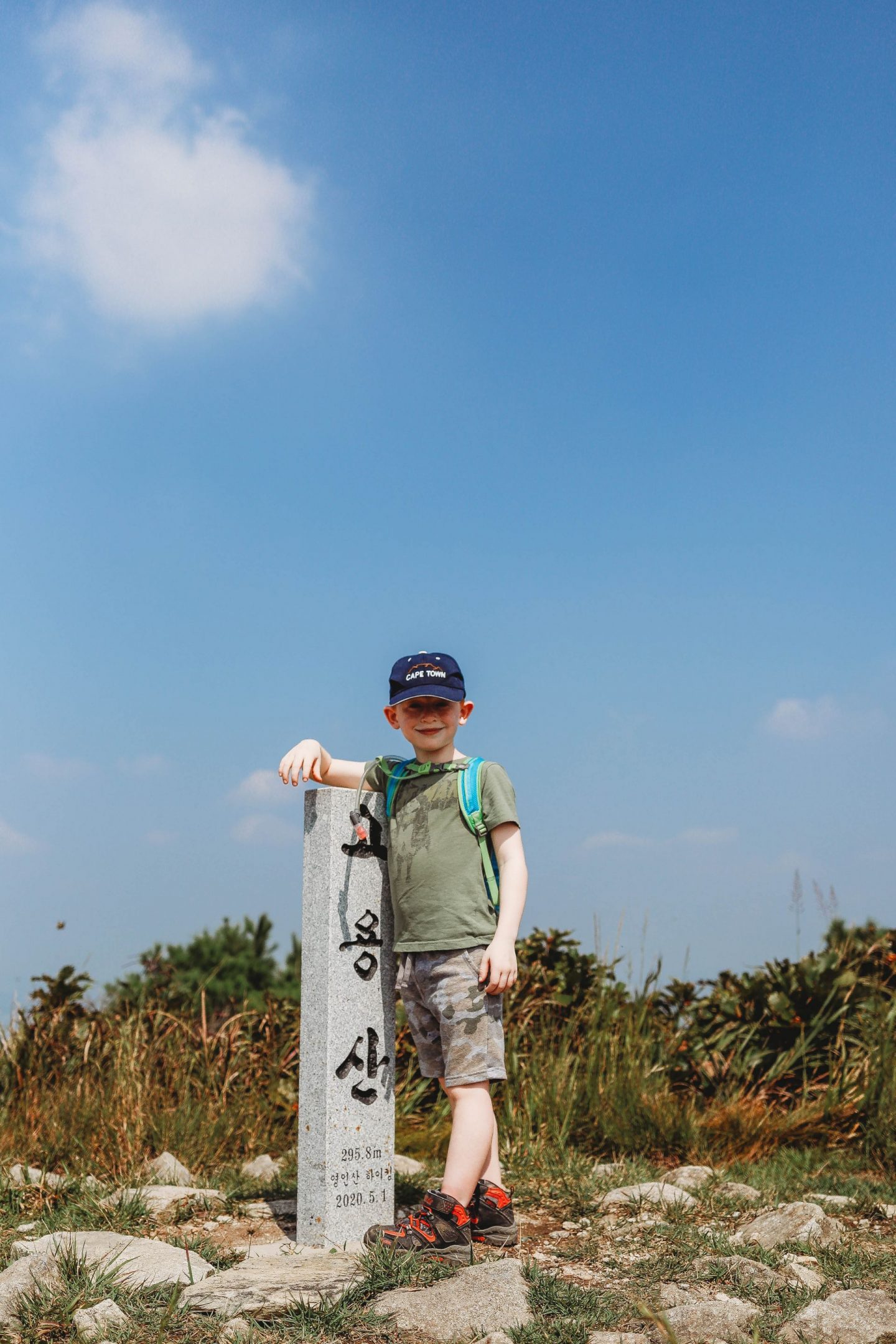 The beauty of Pinnacle Four Trail is that it’s almost entirely under tree cover. We only emerged from the trees when it came time for the final climb. When there were about 480 meters left of the hike, we reached a steep ascent that required ropes to help leverage your way up, and I knew it would be a challenge for the boys, but they did it, and they did it well!

The view at the top was unbelievable. It was a hazy morning, but the haze began to recede, and we had some pretty epic views of the valley below. It was 88 degrees at the top, and the sun was beating down on us, but we sat up there, ate lunch, and watched a fellow hiker attempt to catch the wind to paraglide down. I absolutely love watching my boys do hard things, and after their 5k the day before, we got to see them work their butts off to get to the top. I can’t to see what we accomplish as a family hiking and adventuring here in South Korea if this is how they do now! 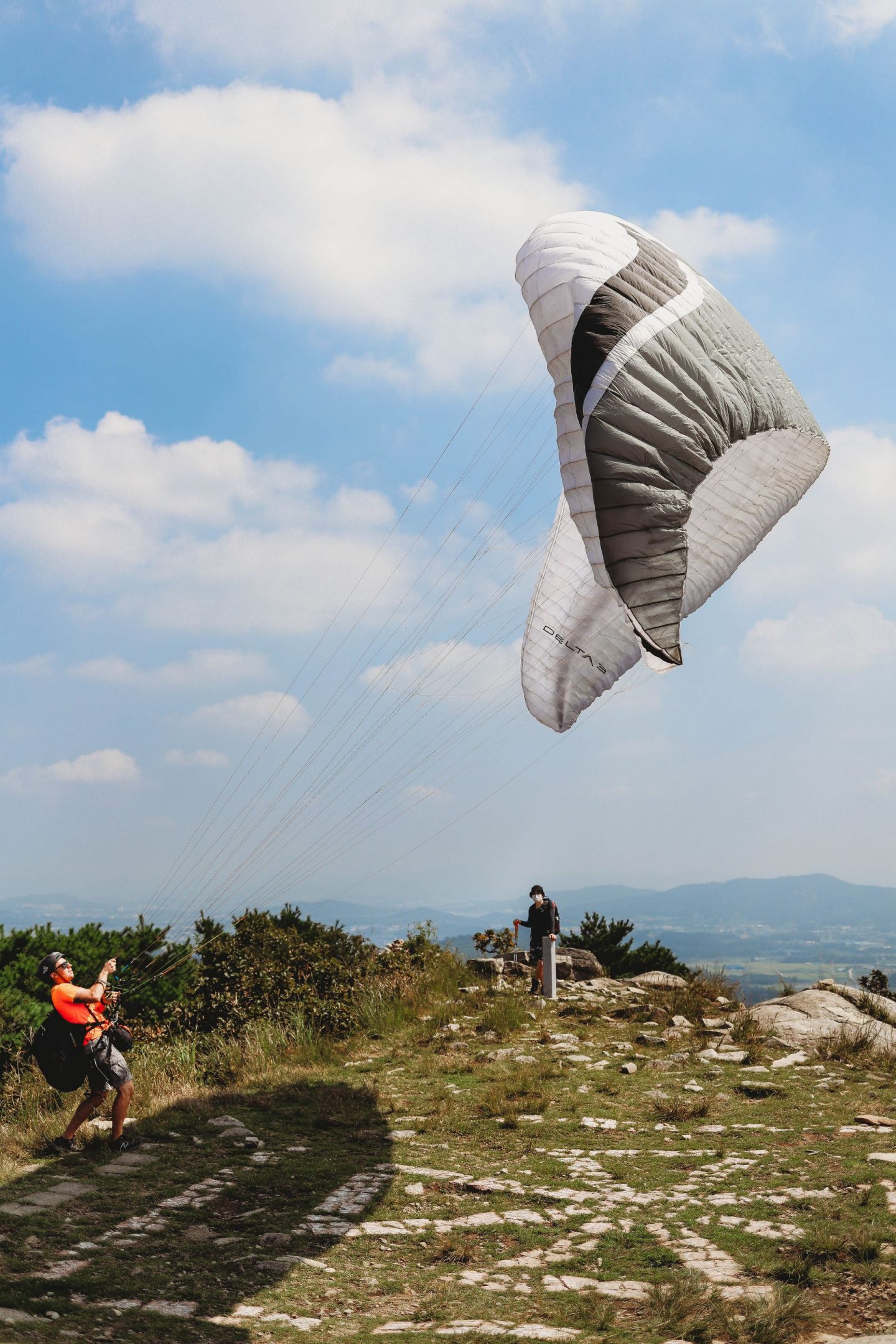 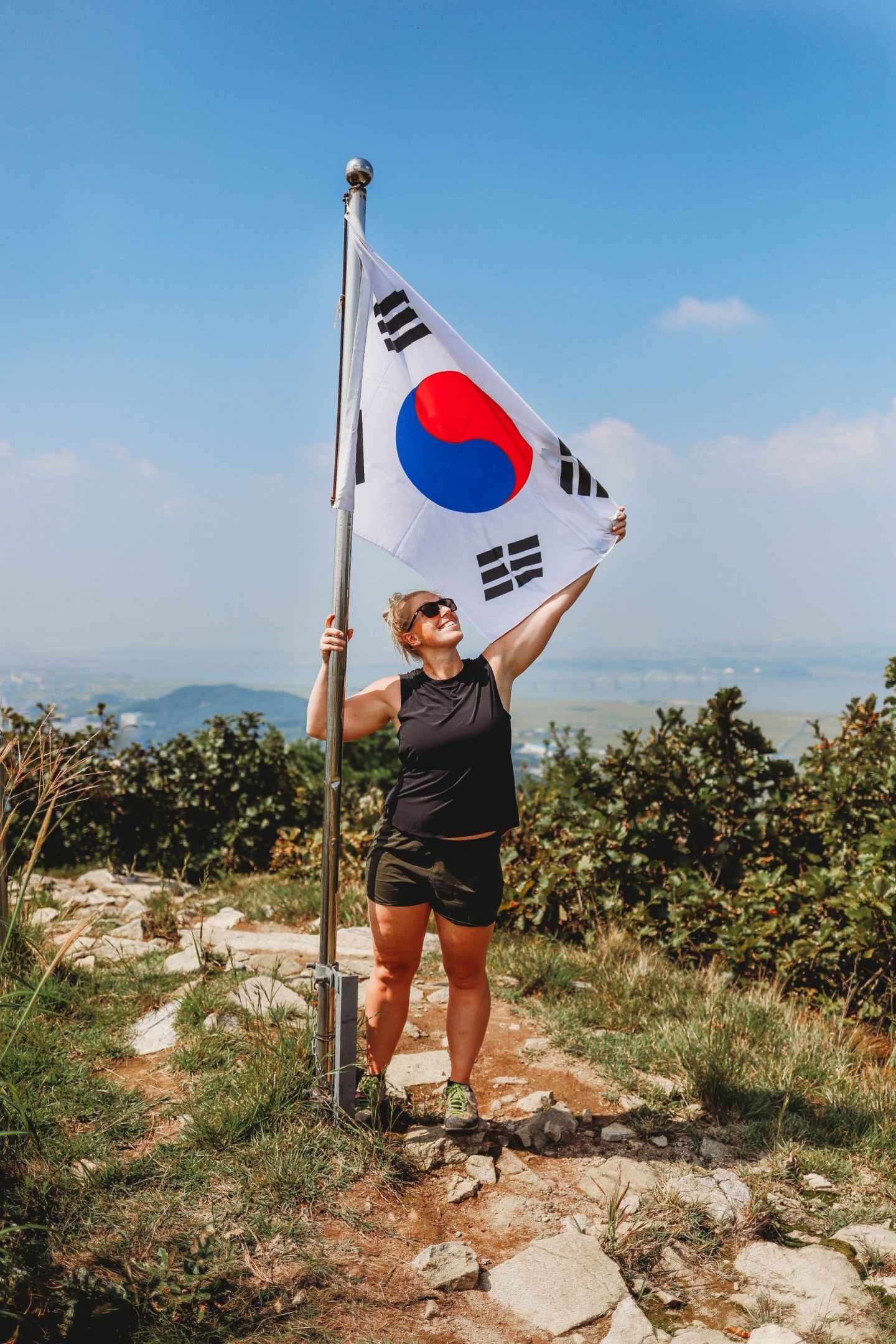 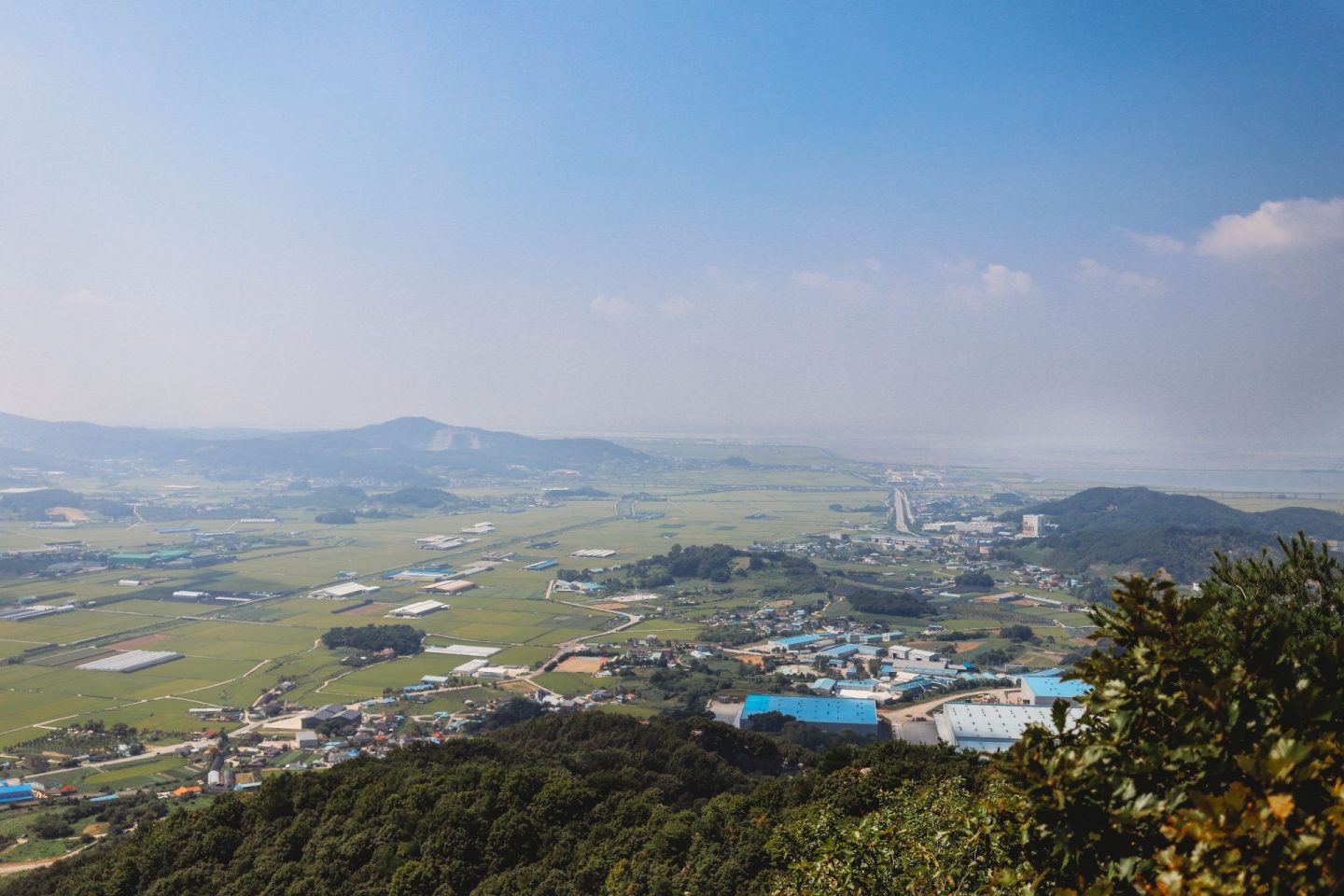 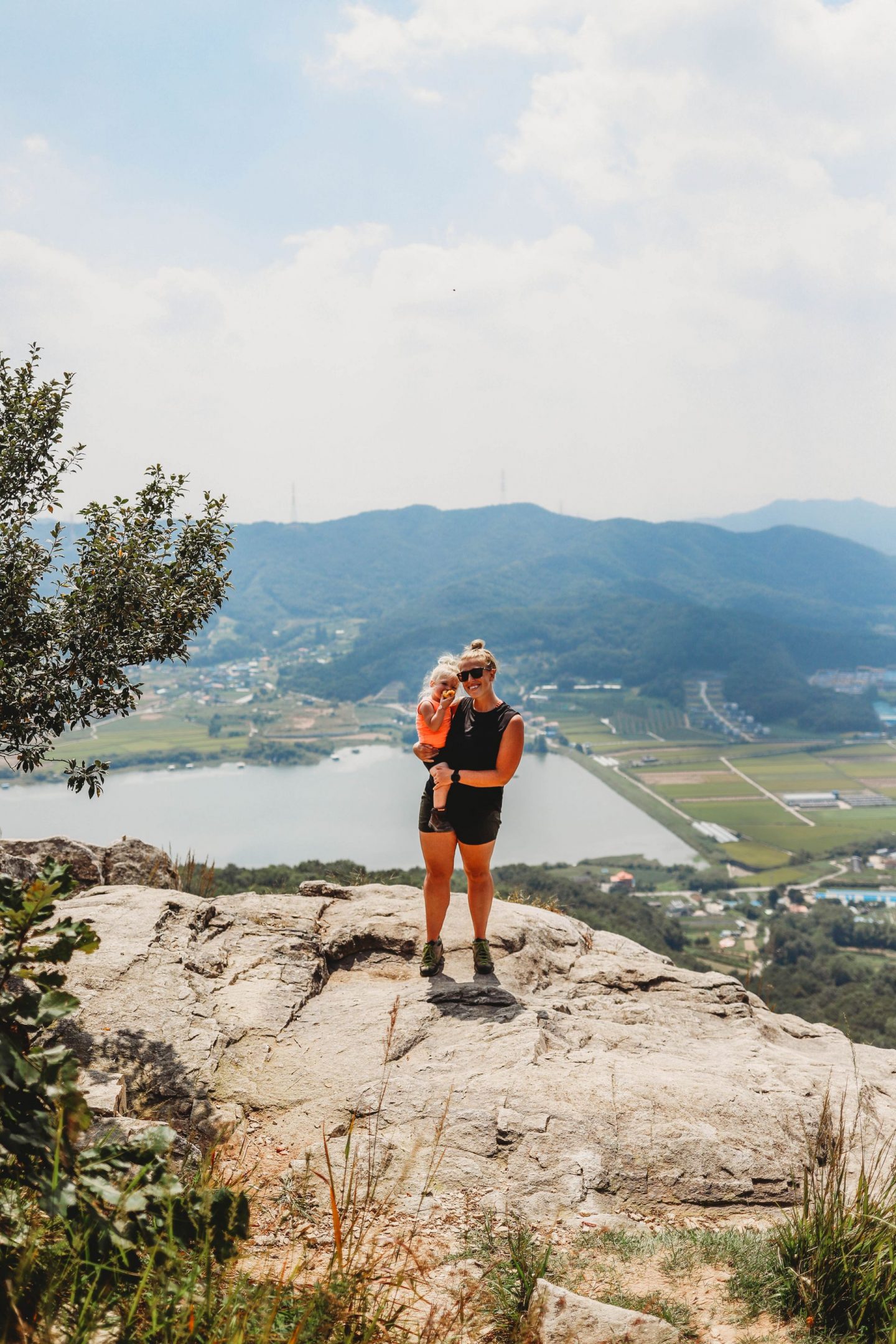 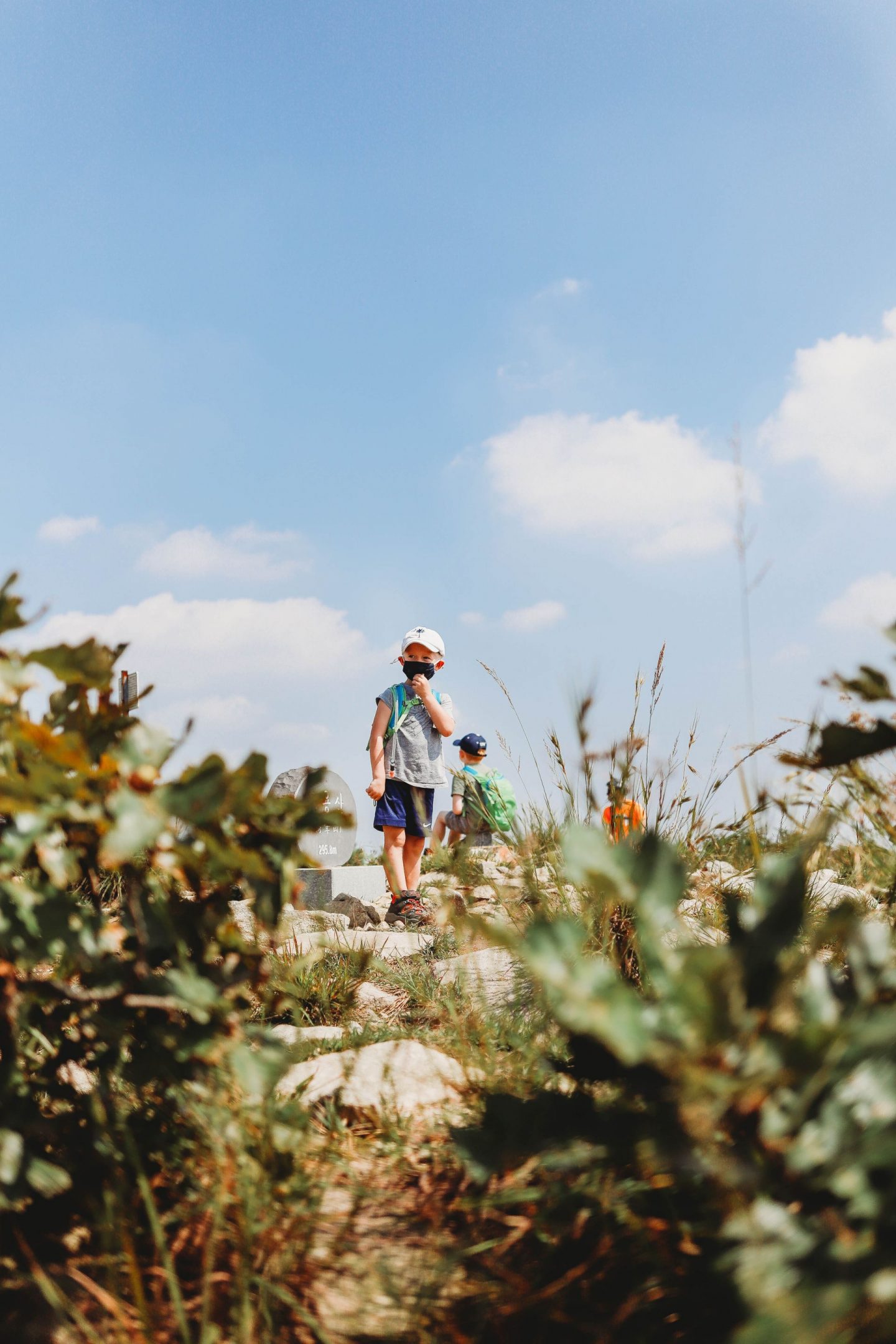 Trail Length: This is an out-and-back trail that clocks in at 2.4 miles roundtrip. There are a few different entrances though, and this is the hard trail!

Level of Difficulty: Moderate to difficult; there is a significant elevation gain, and the ropes near the top require significant effort and at least a modicum of experience.

Cost: Free! Waze took us to on-street parking, but you can actually drive up the first steep hill and park in a little beaten-up lot at the trailhead, too.

Tips: Use both bug spray and sunscreen because there are lots of mosquitoes, and there is absolutely zero shade at the top on a sunny day. You’ll also want appropriate hiking gear and footwear in order to properly climb the last section with the ropes.