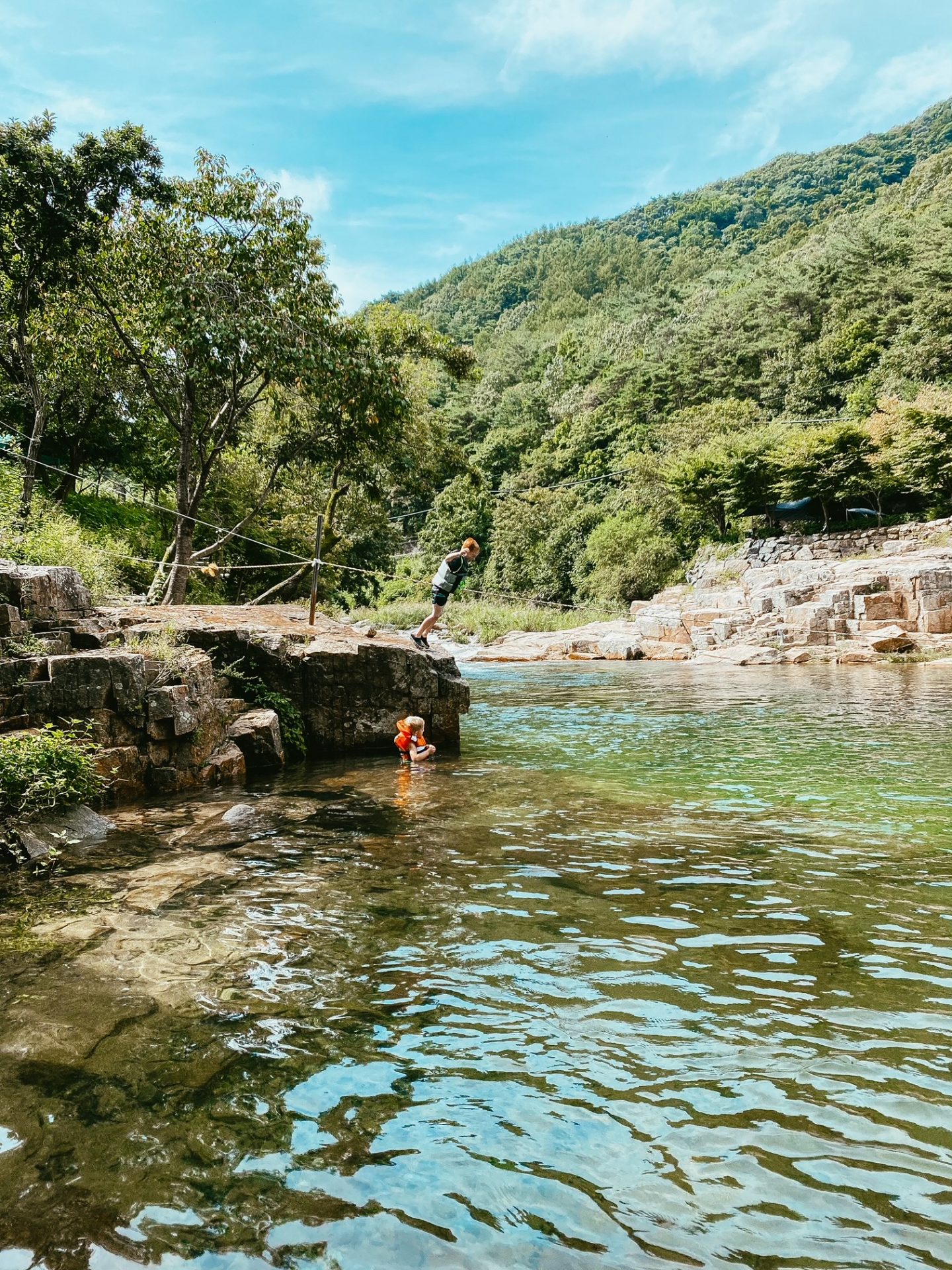 When we moved to Korea, one of the biggest reasons we chose to move further from post and live in downtown Sosabeol was because we wanted to integrate more fully into South Korean culture and our community. We honestly couldn’t have gotten luckier if we tried. The kiddos are obviously unicorns on the playgrounds, and they definitely turn some heads. It was a blessing for us though when one of the sweet boys in our neighborhood, Sam, came over and, in perfect English asked to play with Spencer and Porter. We quickly befriended Sam and his two brothers, Roy and Jay, as well as their mother, Celly, and her husband, Bob. So, when they asked us if we’d like to go spend a day in “the valley” with them, we eagerly accepted.

When Celly mentioned “the valley,” I had absolutely zero clue what she was talking about, but she showed me pictures of a river, and you all know how much Ryan and I like swimming in random bodies of water. So, we were obviously down. Our friends live one building over and offered for us to follow them out to this mysterious “valley,” and we did, making the 90-minute trek out towards Songnisan National Park.

Now, mind you, I’m learning Hangeul slowly, so I understood the address I typed into Naver to be “Saddle Pension.” It made sense but still offered no real hint as to where exactly the valley was. About five minutes from arriving however, we drove into Songnisan National Park, winding our way up along a crystal clear river running along Saddle Garden Pension. For those unfamiliar, a pension is like an Airbnb, or a weekend/weekly rental, and this one actually provides daily use of its tents along the river. 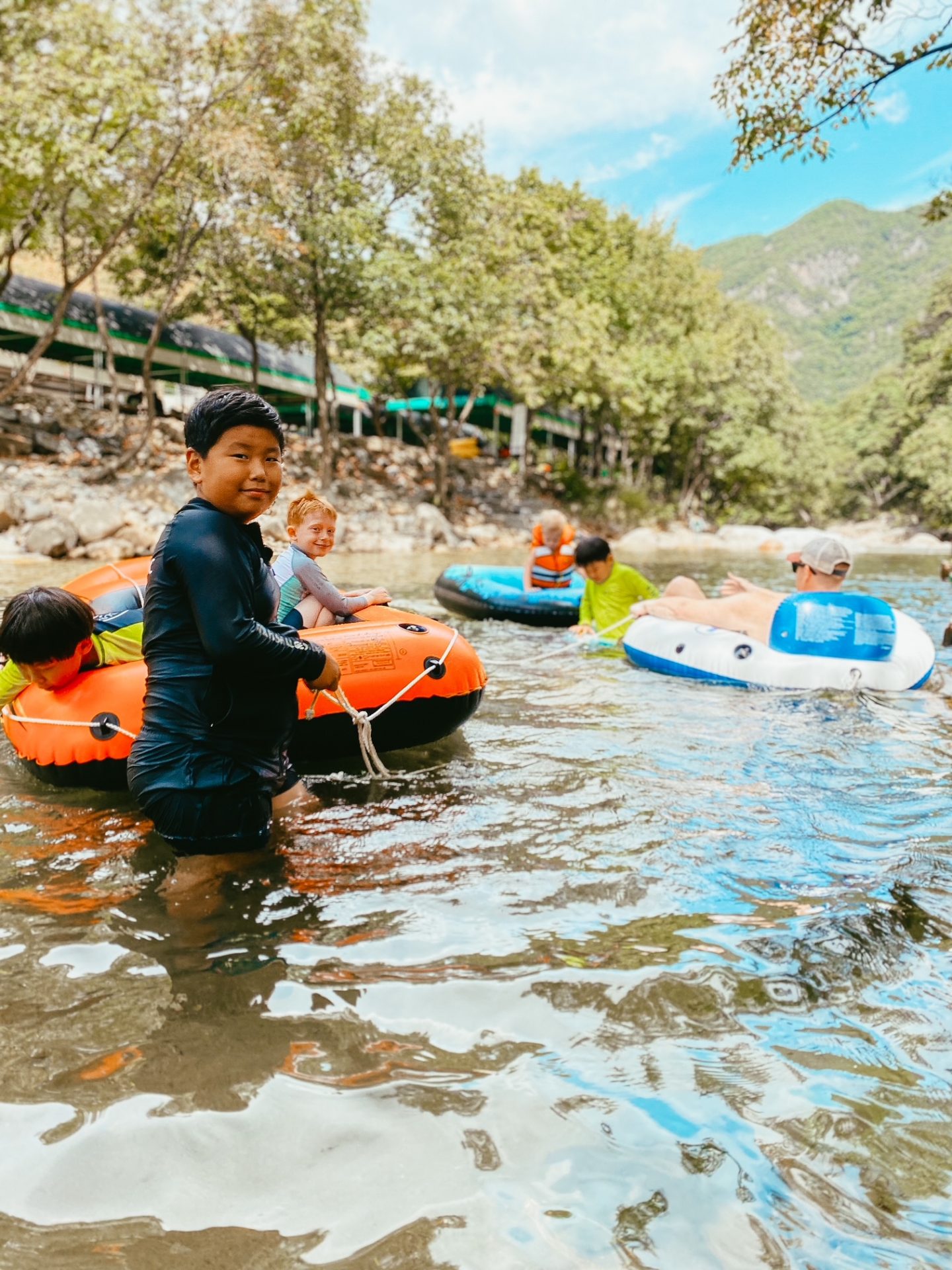 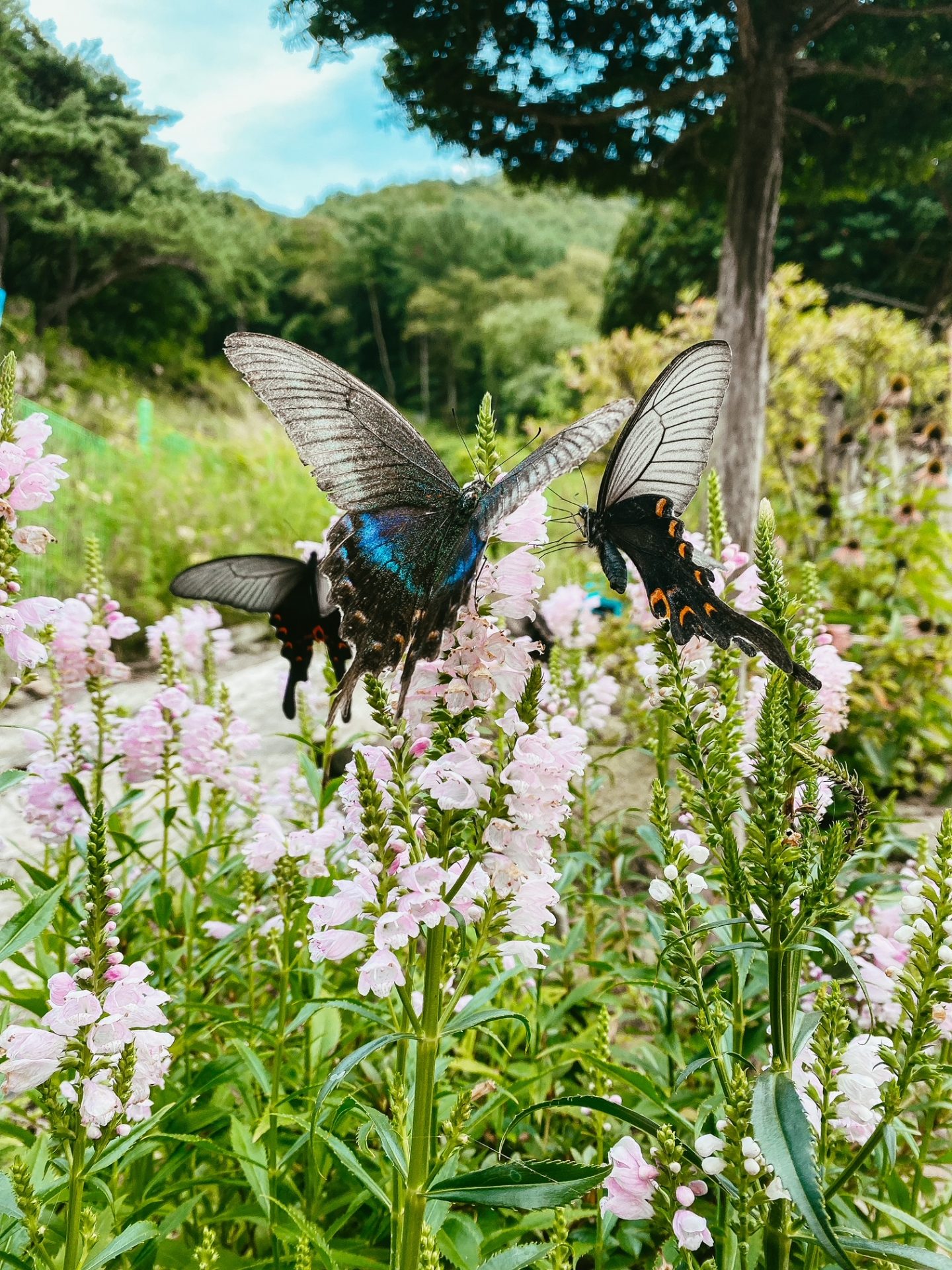 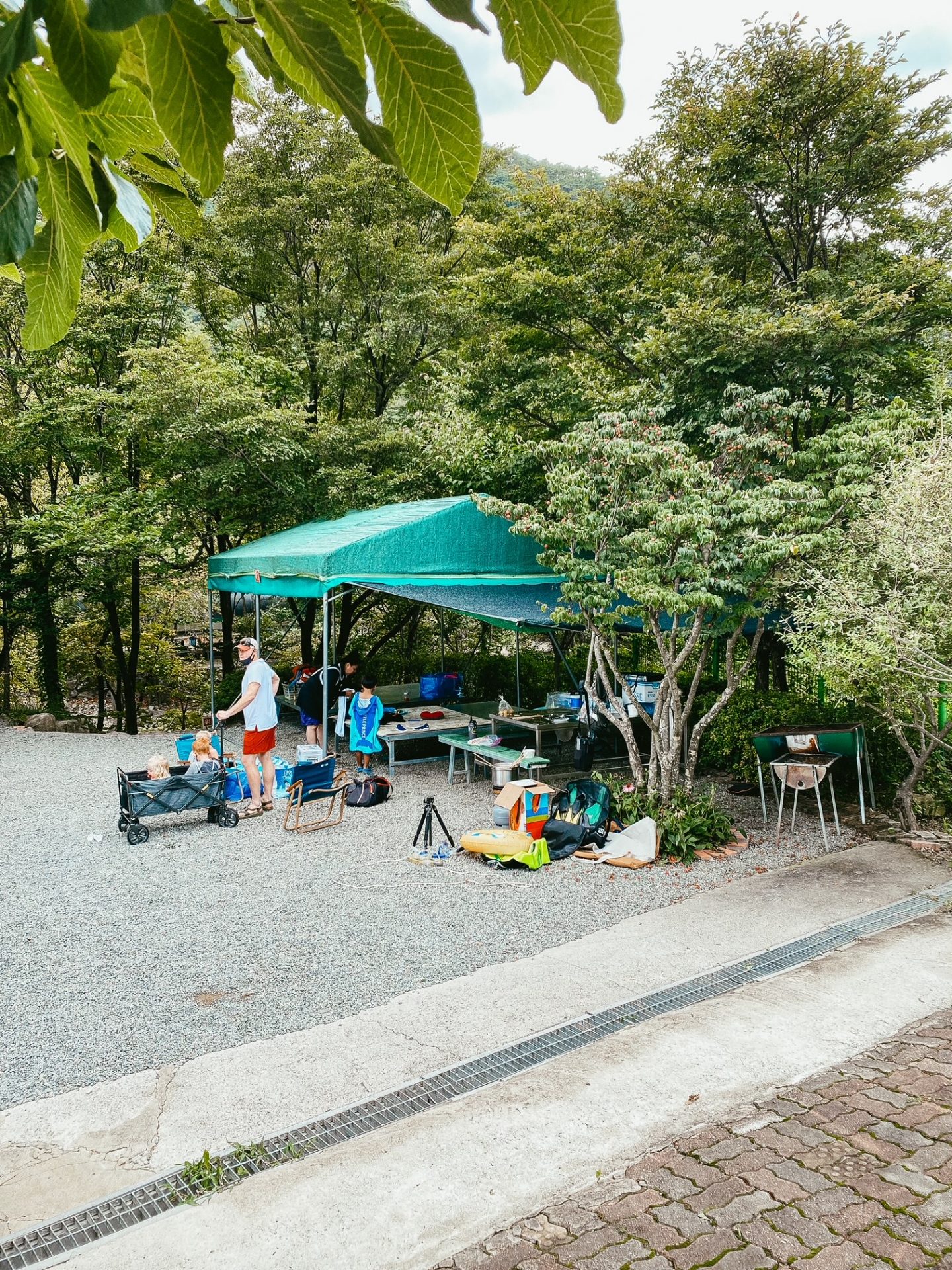 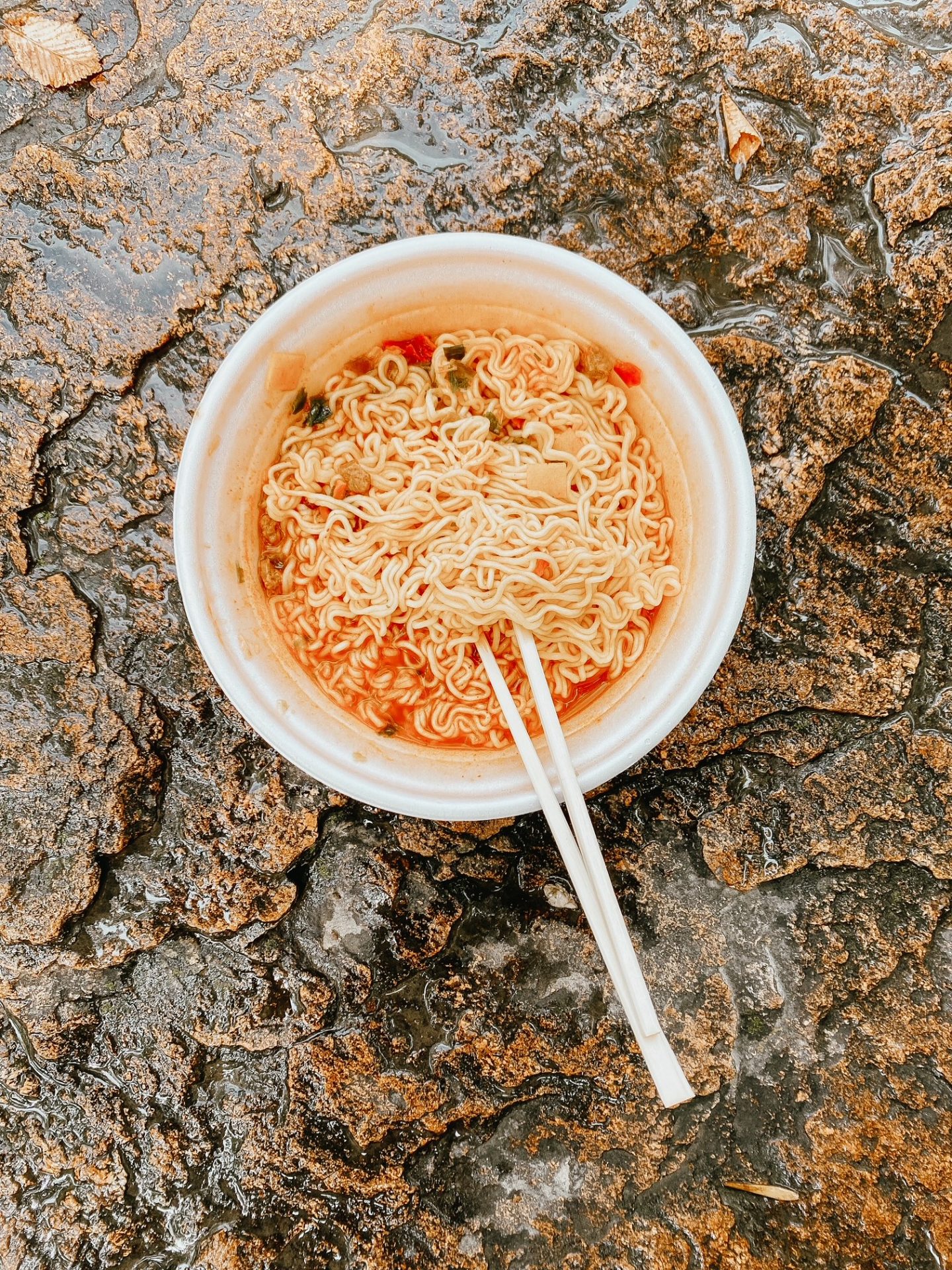 Because of COVID, we were required to show proof of vaccination, so we sent those the day prior to Celly and, upon arrival, we took our temperatures, submitted to contact tracing, and began to set up! Our two families rented two platform open-air tent spaces – kind of like pavilions – for the day where we could barbecue, set up eating areas above the gravel lot, and rest after a long day of river play, which was obviously our first priority.

It was a clear day but not unbearably hot like our first few weeks in Korea, so the first plunge into the water was quite the shock! I’d hazard a guess it was around 66 degrees, and our skinny littles were freezing within minutes, but we warmed up with bowls of noodles for breakfast, then played until lunch. Look, guys. I’m not saying our South Korean friends are the best, but…well…actually I am. We looked super American rolling up with our Coleman cooler, sandwiches, granola bars, and snack food. Celly’s family though? They showed up with everything to grill a feast! We intermittently swam and ate the day away, and it. was. heaven. 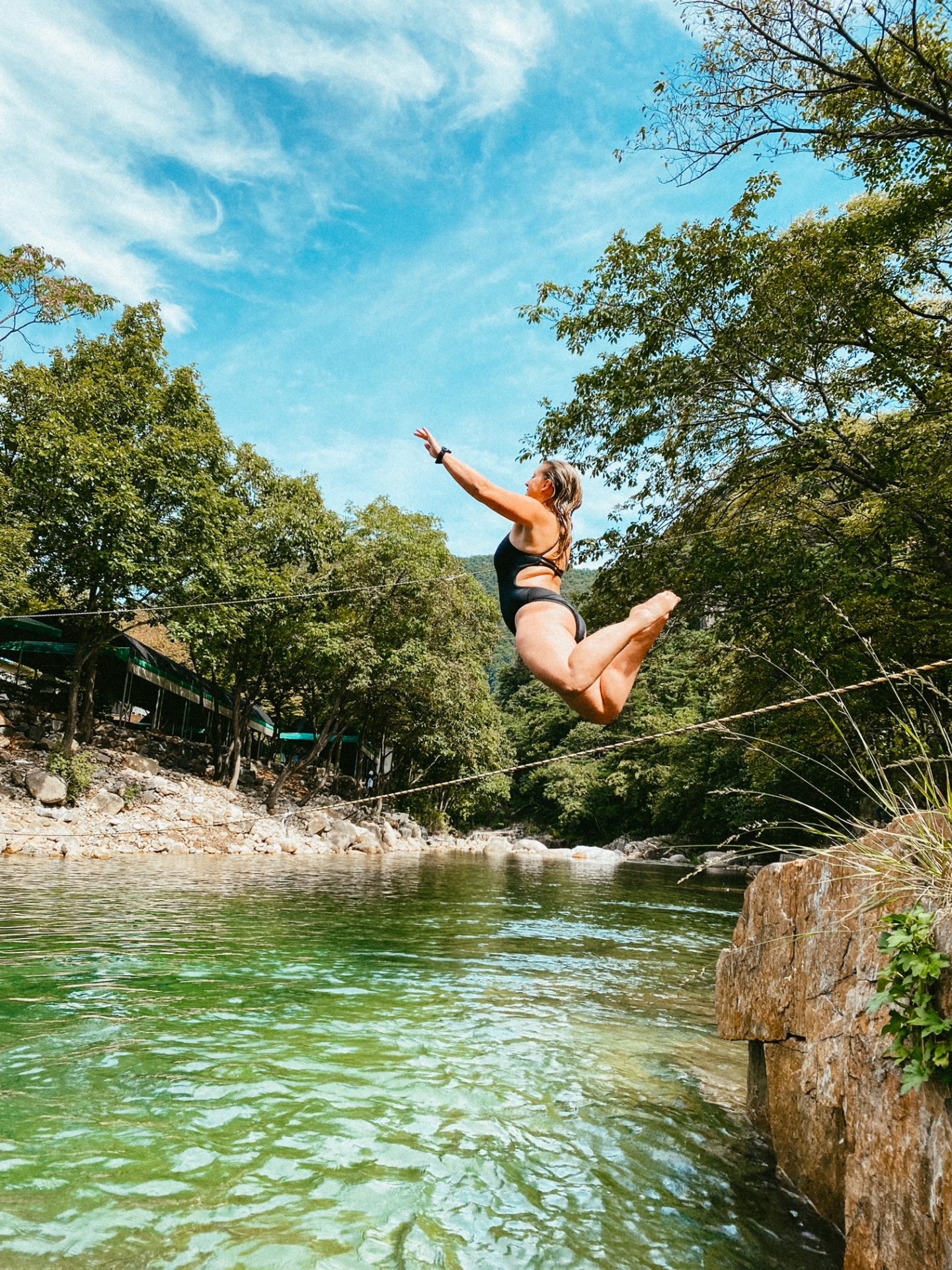 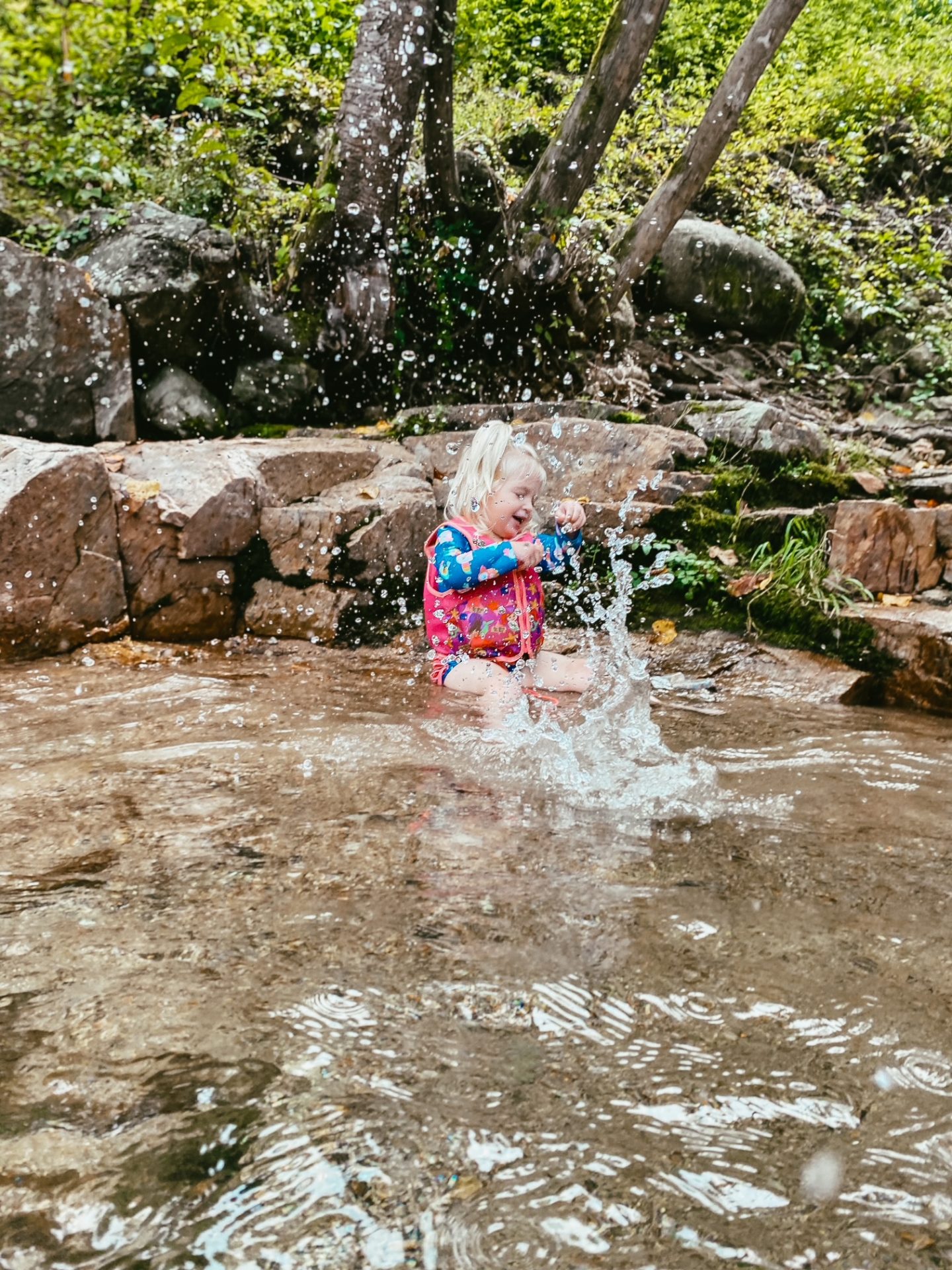 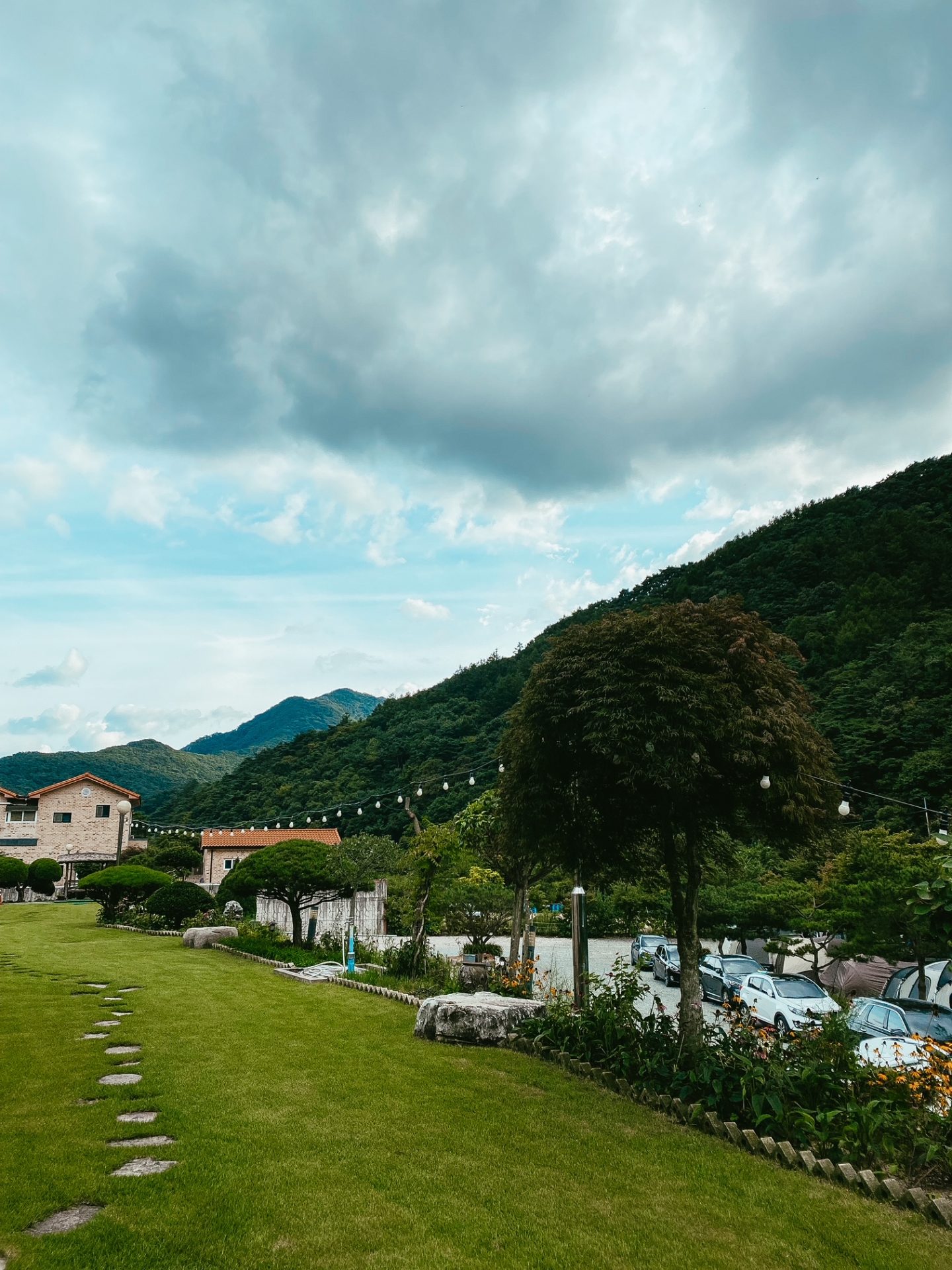 The river, itself, was perfectly clear and, when we put goggles on, we could see it was filled with little fish dancing around below the surface all around our feet. There were natural rock water slides and, of course, our friends brought rafts, tubes (literally everything), and we took turns going through the teeny tiny rapids. There was even a rock to jump into the deeper pool area that was probably around 9-10 feet deep.

Mieke wasn’t really having the tubes, but she did love the shallow areas in which she could sit, throw rocks, and splash around with her life vest on. And, in true Moore fashion, we didn’t manage to emerge unscathed, and Spencer slipped on the rocks and caught himself with his face. We also lost a Croc to the river gods. But was it worth it? Heck yes! Even more worth it was the fact that we’ve made wonderful friends with our Korean neighbors and, even with a language gap, we communicate hilariously, have a wonderful time, and can’t wait to travel together again.